ALA Induced Heme Synthesis: Fine Tuning Mechanisms of PBG Deaminase and ALA Dehydratase

ALA Induced Heme Synthesis: Fine Tuning Mechanisms of PBG Deaminase and ALA Dehydratase

During erythroid differentiation and maturation, three critical components α-globin, β-globin, and heme are critical for the formation of stable α2β2 hemoglobin (Hb) complexes. Heme synthesis enhances globin formation, not only because it is the precursor of Hb but also by modulating the machinery of gene expression and globin synthesis and coordinating erythroid cell maturation. Exogenous 5-aminolevulinic acid (ALA), the first precursor in the heme biosynthesis pathway, circumvents the rate limiting enzyme ALA synthase, and accelerates the heme synthesis pathway. ALA induced erythroid differentiation of human myelogenous leukemia K562 and murine erythroleukemia MEL cells, leads to hemoglobinization and cellular typical maturation. Only two key enzymes where known as regulator of the accumulation of PpIx: Porphobilinogen deaminase and Ferrochelatase. Recently we demonstrated that downregulation or over expression of ALA dehydratase (ALAD) and porphobilinogen deaminase (PBGD), the second and the third enzymes of the pathway, by specific shRNAs caused a marked alteration in PpIX synthesis in K562 erythroleukemic cells. PBGD down regulation induced an elevation in ALAD activity, while over expression of PBGD reduced ALAD activity, indicating a novel regulation feedback of PBGD on ALAD activity. This feedback mechanism enabled partial PpIX synthesis under PBGD silencing, whereas ALAD silencing reduced PpIX production to a minimum, only ALAD loss resulted in reduced PpIX and Hb synthesis.

Hemoglobin synthesis and assembly is largely dependent on coordinated gene expression control, it is well established that the histone deacetylase inhibitor butyric acid activates transcription of heme synthesis an globin mRNA expression, leading to changes in cell morphology and induction of erythroid differentiation of erythroleukemic cell lines. We have demonstrated that the activity of the multitargeting ALA prodrug, AlaAcBu in the induction of protoporphyrin IX (PpIX) and anti-cancer activity following light irradiation. The prodrug AlaAcBu undergos enzymatic intracellular hydrolysis releasing ALA, butyric acid and acetaldehyde and these active components induce accelerated heme and hemoglobin synthesis. Erythroid differentiation was characterized by cellular maturation characterized by cytoplasm hemoglobinization, expression of the marker glycophorin A and polar arrangement of mitochondria and a developed central vacuolar system preceding nuclear extrusion. The ability of AlaAcBu to promote differentiation along the erythroid lineage and to dramatically induce hemoglobin synthesis is presented in this report.

Experimentally, it was shown that exogenous 5-aminolevulinic acid (ALA), the first precursor in the heme biosynthesis pathway, circumvents the rate limiting enzyme ALA synthase, and accelerates heme synthesis. ALA induced erythroid differentiation of human myelogenous leukemia K562 and murine erythroleukemia MEL cells, leads to hemoglobinization and cellular typical maturation [4].

The heme biosynthesis pathway is one of the most studied enzymatic tracks in cellular anabolism. 5-Aminolevulinate synthase (ALAS) is the first and rate-limiting mitochondrial enzyme producing ALA (Figure 1). Two ALAS isoenzymes, the housekeeping in the liver, and ALAS-N in erythroid cells, by a negative feedback mechanism are regulated by the end product heme. In erythroid tissues both ALAS-E and ALAS-N are expressed, and regulated by distinctive mechanisms. In differentiating erythroblasts ALAS-E is upregulated by heme as well as globin synthesis followed by cellular maturation. Figure 1: The major enzymatic steps of the heme biosynthesis pathway. ALA, produced by ALA synthase in the mitochondria is exported to the cytosol and condensed by ALA dehydratase (ALAD) to form the first pyrrole, porphobilinogen. Porphobilinogen deaminase (PBGD) condenses 2 molecules of porphobilinogen to its cofactor dipyrromethane (DPM), before the final product, the linear tetrapyrrole hydroxymethylbilane (HMB), is released. HMB is converted to uroporphyrinogen III (Uro'gen) by Uro'gen synthase. Uro'gen decarboxylase and copro'gen III oxidase catalyze the formation of protoporphyrinogen IX (Proto'gen). In the last step Ferrochelatse inserts iron into the tetrapyrrole ring to produce heme

In erythroid systems silencing of ALAS-E mRNA using anti-sense RNA results in a decrease in mRNA levels of ALAS, ALAD, PBGD, FeCh and β-globin, as well as heme formation in differentiating cells. Compensation by ALA or hemin treatments circumvented ALAS silencing and partially restored FeCh and β-globin expression and the heme levels in these cells. In conclusion, heme formation in erythroid cells is largely dependent on ALAS-E expression [8].

We investigated the effect of ALA pre-treatment on PBGD expression and activity. K562, cells were treated with ALA for 4 or 24 h (Figure 2A). The results show that ALA incubation for 24 h activated PBGD activity by 250% in comparison to control. The PBGD expression level was examined by Western blot analysis (Figure 2B) and clearly showed no significant difference in the PBGD expression level following ALA administration. Moreover, ALA pre-treatment resulted in a significant PpIX elevation, presumably due to PBGD activation. 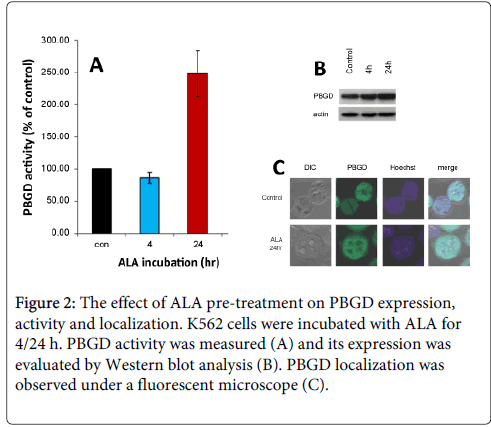 Figure 2: The effect of ALA pre-treatment on PBGD expression, activity and localization. K562 cells were incubated with ALA for 4/24 h. PBGD activity was measured (A) and its expression was evaluated by Western blot analysis (B). PBGD localization was observed under a fluorescent microscope (C).

In several studies we have shown that PBGD has a dual subcellular localization, as expected in the cytosol and in addition 50% of total enzyme is imported into the nucleus without a known function [10]. We attempted to examine whether the nuclear fraction of PBGD will change following enzymatic activation. Following ALA pre-treatment no notable change in PBGD localization could be seen. PBGD is constantly localized both in the nucleus and in the cytoplasm (Figure 2C).

Two cytosolic expression checkpoints that may affect tetrapyrrole biosynthesis - ALA dehydratase (ALAD) and porphobilinogen deaminase (PBGD), were investigated. We manipulated PBGD expression levels by PBGD siRNA (Feuerstein et al., 2009). PBGD down-regulation reduced PBGD activity by 80% activity, while overexpression of PBGD induced an elevation of 140% in activity (Figure 3B). Only a partial decrease in PpIX synthesis was measured under PBGD silencing. The graphic presentation of this silencing cascade is shown in Figure 3A. 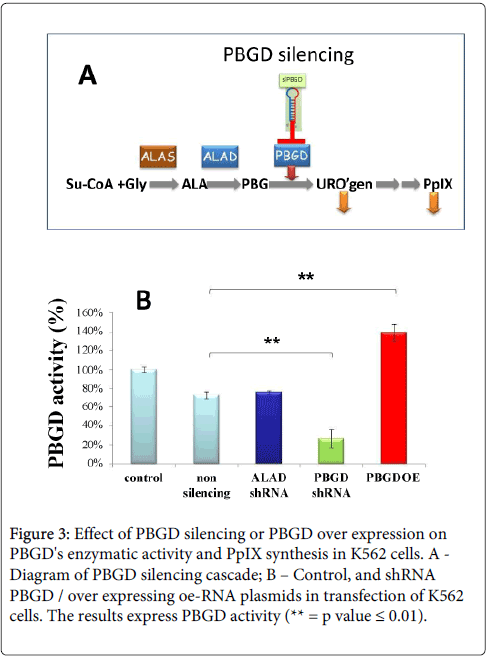 We down-regulated the expression of ALAD and PBGD by siRNAs (Figure 4B); or over expressed PBGD by using siPBGD plasmids. Figure 4B shows that ALAD siRNA down regulated ALAD expression and reduced markedly the activity of the enzyme. However transfection of the K562 cells with PBGD siRNA induced a marked increase in ALAD enzymatic activity. The graphic presentation of these studies are summarized in Figure 4A, it depicts the unexpected result of fine tuning of the pathway via PBGD levels, reduction of PBGD induce increased levels of ALAD. This feedback mechanism enabled partial PpIX synthesis under PBGD silencing, whereas ALAD silencing reduced PpIX production to a minimum (Figure 5). 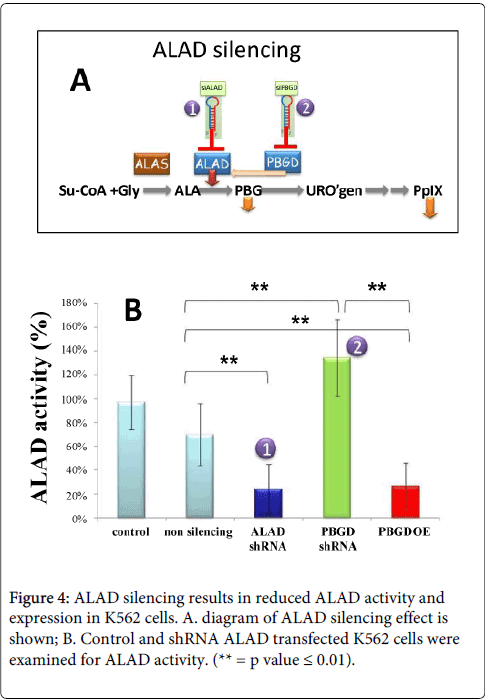 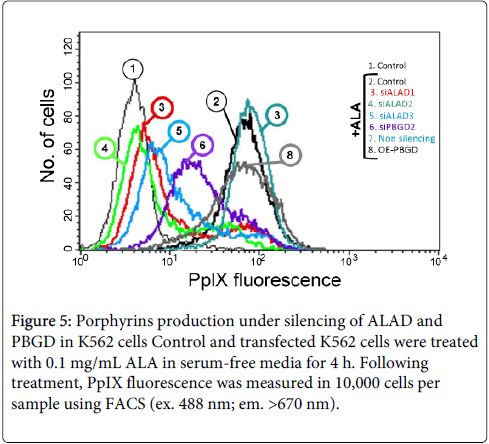 Figure 5: Porphyrins production under silencing of ALAD and PBGD in K562 cells Control and transfected K562 cells were treated with 0.1 mg/mL ALA in serum-free media for 4 h. Following treatment, PpIX fluorescence was measured in 10,000 cells per sample using FACS (ex. 488 nm; em. >670 nm).

The specific histone deacetylase inhibitor butyric acid (BA) activates transcription of globin mRNA, leading to changes in cell morphology and induction to erythroid differentiation of erythroleukemic cell lines [11-14]. It was previously shown that combination of ALA and BA treatment of K562 cells enhances hemoglobin synthesis to a substantially higher level than does each compound separately [15]. We have recently shown that the activity of ALA prodrugs in the induction of PpIX and anti-cancer activity following light irradiation [16,17] was superior to ALA in inducing photo-dynamic cell death.

The concept of stimulation of erythropoiesis by the multifunctional 5-aminolevulinic-acid (ALA) derivative, 1-(butyryloxy)ethyl-5-amino-4-oxopentanoate, (AlaAcBu Figure 6), was tested on the human erythroleukemia K562 cell system. 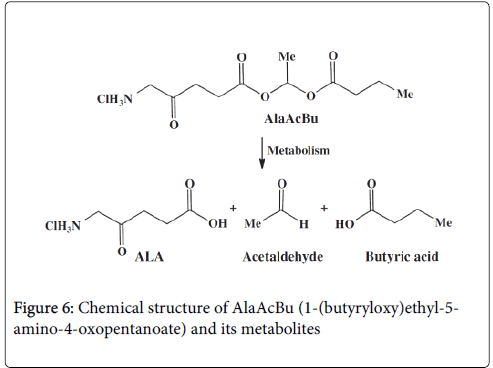 We have shown that the multifunctional AlaAcBu derivative undergoes metabolic hydrolysis yielding two erythroid differentiation inducers, ALA and BA, each acting through a different mechanism. ALA, the first precursor in the heme biosynthesis, accelerates heme synthesis and BA, a histone deacetylase inhibitor (HDACI) that activates the transcription of globin mRNA. Our study [18] showed that the AlaAcBu mutual prodrug is a potent chemical differentiation inducer of K562 cells manifested by augmentation of heme synthesis.

Moreover, AlaAcBu stimulated globin synthesis and assembly of hemoglobin in the erythroleukemic cells (Figure 7). It is conceivable that the treatment with AlaAcBu increased heme synthesis and globin expression on the gene expression level and on the enzymatic level as well. We propose that stimulation of the heme pathway evident by activation of PBGD and ferrochelatase as seen by heme accumulation. Cellular erythroid differentiation was revealed by the expression of the marker glycophorin A and cellular maturation characterized by cytoplasm hemoglobinization, polar arrangement of mitochondria and a developed central vacuolar system preceding nuclear extrusion (Berkovitch-Luria et al., 2012). Thus the synthetic ALA derivative AlaAcBu, upon hydrolysis promotes superior stimulation of erythroid differentiation by two independent mechanisms. The first released product ALA, stimulates heme synthesis being its natural precursor, The second product butyric acid, induces erythroid gene expression by its histone deacetylation activity, and an additional effect of supplemented ALA is the induced DPM synthesis and thus activation of the rate limiting enzyme PBGD. 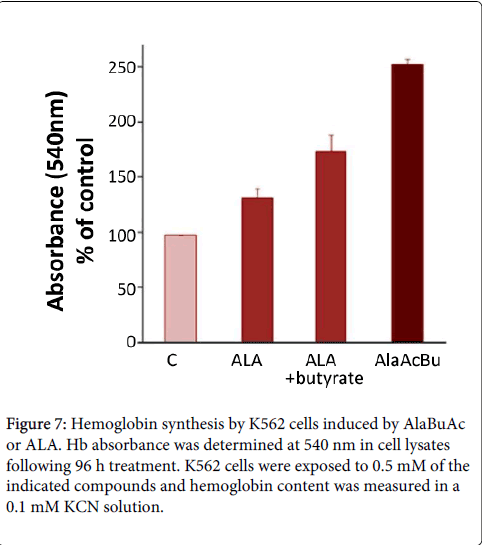 Figure 7: Hemoglobin synthesis by K562 cells induced by AlaBuAc or ALA. Hb absorbance was determined at 540 nm in cell lysates following 96 h treatment. K562 cells were exposed to 0.5 mM of the indicated compounds and hemoglobin content was measured in a 0.1 mM KCN solution.

We investigated the possibility to stimulate PpIX synthesis in an erythroleukemia K562 cell model, by elevating PBGD activity due to ALA supplementation, which serves as the precursor for PBGD cofactor DPM on one hand, and in parallel enables synthesis of PBG. The elevated PBG availability enabled further efficient PpIX synthesis. We have previously shown that ALAD silencing in K562 cells caused a dramatic reduction in PpIX synthesis, significantly more than PBGD silencing. While ALAD reduced PpIX by two orders of magnitude, almost as control cells, the PpIX level following PBGD silencing caused only one order of magnitude decrease. This phenomenon may arise from the fact that ALAD silencing prevented PBG formation and therefore PBGD, which is rate limiting, could not be active.

The fine-tuning of the porphyrin synthesis pathway was depicted under silencing of PBGD. While PBGD was silenced by a specific siRNA, unexpectedly the enzymatic activity of ALAD became enhanced markedly under these conditions. This positive feedback mechanism enabled partial PpIX synthesis under PBGD silencing, as the increased activity of ALAD enabled compensated production of tetrapyrroles and PpIX. Conversely, ALAD reduced activity under gene silencing resulted in reduced PBG synthesis and consequently failure in PpIX synthesis.

Moreover the ALA derivative AlaAcBu induced the expression and activity of heme biosynthesis, the key enzymes porphobilinogen deaminase (PBGD), ferrochelatase and the expression of glycophorin A (the erythroid cell marker), and led to a dramatic increase in heme and Hb synthesis. These results support the potential of AlaAcBu to stimulate Hb synthesis and erythro-differentiation.

Copyright: © 2014 Malik Z, et al. This is an open-access article distributed under the terms of the Creative Commons Attribution License, which permits unrestricted use, distribution, and reproduction in any medium, provided the original author and source are credited.