We as dentists are very aware that our 21st century jaws are developing smaller. Modern humans’ facial structures are slowly shrinking, which can narrow the upper airway. This is evidenced by the fact that rates of malocclusion and impacted (or non-existent) wisdom teeth are increasing in modern, Westernized countries [1]. Sleep related disorders such as sleep apnea and upper airway resistance syndrome are on the rise. Although rising levels of obesity heavily influences the increasing rates of obstructive sleep apnea (OSA), detailed analysis of more basic etiology suggests a possible craniofacial origin [2]. The purpose of this article is to suggest that some of our lack of jaw development can be reversed in so called non-growing adults through oral appliance therapy and epigenetics resulting in better sleep and breathing.

It is the study of changes in gene expression caused by certain base pairs (genes), in DNA, or RNA, being "turned off" or "turned on" again, through chemical reactions. The term also refers to the changes themselves: functionally relevant changes to the genome that do not involve a change in the nucleotide sequence. When a change in environment has biological consequences that last long after the event itself has vanished, we are seeing an epigenetic effect in action. In other words, a set of modifications to our genetic material that change the ways that gene are switched on and off, but which does not alter the genes themselves, a biological response to an environmental stressor.

It is a medical imaging technique consisting of X-ray computed tomography where the X-rays are divergent, forming a cone. The scanning software collects the data and reconstructs it, producing what is termed a digital volume composed of three-dimensional voxels of anatomical data that can then be manipulated and visualized with specialized software.

It is the first step of gene expression, in which a particular segment of DNA is copied into RNA by the enzyme RNA polymerase.

A cone beam computerized tomographic scan (CBCT) scan and 3D facial scan, (stereo photogrammetry) were taken for each patient. Upper and lower dental models were fabricated to establish a baseline. Upper and lower Homeoblock™ appliances were fabricated. The Homeoblock™ consists of “Adams clasps” on the bicuspids with a baseplate that incorporates a palatal expansion jack screw. The appliance is relieved from the palatal tissues. Flap springs rest on the anterior teeth and and a Hawley archwire extends from left to right canine. A bite block is placed on the second bicuspid and first molar on the less developed side, which is the side with a deeper naso-labial depression, lower eye, thinner upper lip or deeper pre-jowl region. Bird beak pliers and/or three prong pliers are used for the adjustment of clasps. The appliances were worn a maximum of 10-12 hours each night for a minimum of 12 months. The patients were instructed to advance the expansion screw 0.125 mm (1/4 turn) each week.

A 28 year old male presented with a chief complaint of morning fatigue. An overnight sleep study (psg) revealed mild sleep apnea, RDI 12, with multiple awakenings. The patient was treated for 12 months with homeoblock™ appliance therapy to develop his airway.

Data from a before cone beam tomographic scan generates a green object map of his facial skeleton (Figure 1). Data from an after cone beam tomographic scan generates a red object map of the facial skeleton. These before and after object maps are registered in 3D space using the bone threshold and hundreds of bone landmarks. (“Analyze 10.0” developed by the Mayo Clinic). Where the red shows through is where there is an increase in bone volume. The red also shows the change in the axial dimension of the airway. This photo shows that the dental arches, upper and lower have widened and the mandible has remodeled wider on his left side (Figure 1). The teeth have moved in the dental arch and the airway has widened on the left side. Before and after Watch PAT 100 ambulatory polysomnography show a reduced pulse rate (red) and a reduction in awakenings in the after study (peaks). With improved airway tone and reduced arousal index the patient reported a better night sleep (Figures 3 and 4). 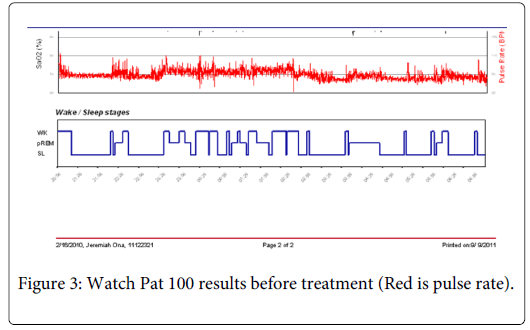 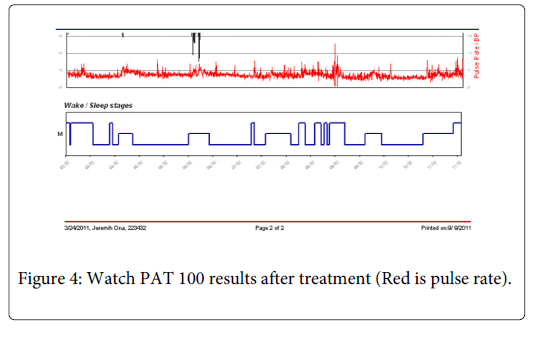 A sixty year old male was tested for sleep apnea. Testing showed an RDI of 38.5 and an AHI of 37.6. He tried CPAP and was non-compliant.

He chose to try a developmental protocol before being fitted for a FDA approved mandibular advancement appliance with the following results (Figure 5). Figure 5: Red indicates the changes in the bone after treatment.

We show maxillary and mandibular development on the right side with some widening of the ramus at the mandible.

The changes in red are registered in voxels, in this case approximately 0.40 mm would be the smallest change visible.

The margin of error is negligible since we are demonstrating patterns of development and not just a few voxels (Figures 6 and 7). Figure 6: A redundant lateral pharyngeal fold in the before airway photo A toned airway in the after photo. Figure 7: Right side airway collapse in the before photo A toned and symmetrical airway in the after photos.

Before and after Watch PAT 100 ambulatory polysomnography show a reduced pulse rate and a reduction in number of awakenings in the after study. The patient still has severe apnea but feels much better (Figures 8 and 9). 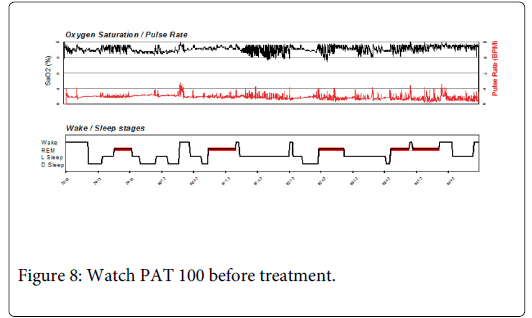 Both case studies show unilateral skeletal changes. Furthermore we see airway development on the same side as the facial skeletal changes. The first case study shows a widening at the ramus of the mandible on the patient’s left side. A transverse section through the airway at the level of the secondcervical vertebraealso shows a widening of the airway on the left side. In the second case study the skeleton shows mandibular changes mostly on the right side. A coronal slice shows considerable airway development on the right side. The before airway shows redundant pharyngeal folds collapsing on the right side. In the post-op photo we see that the airway is toned on the right side and a transverse section at the second cervical vertebrae shows right side development and enhanced airway symmetry in the post op photo. These results are consistent with a biological response to an environmental stressor (The Homeoblock™ appliance) and can be explained as an epigenetic response. Both patients show improved airway tone and considerably less awakenings and improved sleep architecture after appliance therapy. Some of the most critical issues for a better night sleep are airway tone and arousal threshold. We postulate that these changes which can be attributed to an epigenetic response to the appliance therapy have contributed to enhanced sleep quality for these patients.

The mechanism by which the bone growth is generated works like this. A bone cell has a receptor site on its outer membrane which will accept and bond certain proteins such as growth factors [3]. The growth factor protein can be generated by a mechanical strain on the periosteal membrane [4]. The growth factor binds to the cell membrane and stimulates a cascade of events within the cytoplasm of the cell which results in a transcription factor that enters the nucleus of the cell. A transcription factor is a protein that binds specifically to DNA and determines which genes are turned on or expressed. In the case of the bone growth factor the results are mRNA transcription where a copy of the gene is made and a new bone cell is generated. The developmental mechanisms of sutural homeostasis are activated by the appliance. Despite the fact that most osteogenic activity is normally observed during early to late childhood, it is now understood that palatal, maxillary and circum-maxillary sutures retain biosynthetic potential into late adulthood [5] and it is possible that mechanical stimuli up-regulate genes that are not typically expressed during normal development [6]. The Homeoblock™ appliance generates strain on the periosteum of the palatal bone and while swallowing provides intermittent light force signaling to the periodontal membrane. Thus, Homeoblock-induced mechanotransduction may result in remodeling activities that affect facial morphology. The net results of this protocol are thought to evoke the maxillo-mandibular spatial patterning that is encoded for at the level of the genome. Genetic expression results in the bone and airway changes that we see. The Homeoblock is based on principles of epigenetics. Mechanical stimulation by the device is thought to initiate gene transcription within the periodontal ligament and bone periosteum which creates dental movement and new bone formation [7,8].

Copyright: © 2014 Belfor TRR. This is an open-access article distributed under the terms of the Creative Commons Attribution License, which permits unrestricted use, distribution, and reproduction in any medium, provided the original author and source are credited.