Given the significance of increased hemostatic activity in atherosclerosis and thrombosis and the important role of the SNS in cardiovascular disease, sympathetic activation and catecholamine effects might contribute to arterial thrombus formation.

In particular, chronic stimulation of the SNS and concomitant hypercoagulable changes could contribute to gradual fibrin deposition at sites of atherosclerotic lesions and, in patients with endothelial dysfunction, acute stress response could trigger rupture of an atherosclerotic plaque.

Further studies are needed to better understanding the regulation of the SNS-hemostasis axis.

Hemostatic processes contribute to gradual fibrin deposition within atherosclerotic plaques and overt thrombus formation subsequent to plaque disruption [1]. It is still debated whether hypercoagulability indicates an underlying atherosclerotic process or is cause of atherosclerosis and thrombosis [2]. Stimulation of sympathetic nervous system (SNS) increases blood clotting (by V, VIII, and Von Willebrand factors) and platelet activation with raised risk for atherothrombotic events [3-12]. The SNS regulates several homeostatic functions (e.g. cardiac, respiratory, digestion, urination, and sexual arousal) and induces physiological changes during the “fight-or-flight response”(also called the acute stress response), that is a physiological reaction occurring in response to a perceived harmful event, attack, or threat to survival [13].

During acute stress response, catecholamines (adrenaline and noradrenaline) facilitate immediate physical reactions associated with a preparation for violent muscular action and increased strength and speed in anticipation of fighting or running. These physiological changes include: increased blood flow to the muscles, raised blood pressure, heart rate, blood sugars, and fats, increased muscle tension, dilation of pupil, enhanced perspiration and increase the blood clotting function of the body speeds up [14-16] (Figure 1). 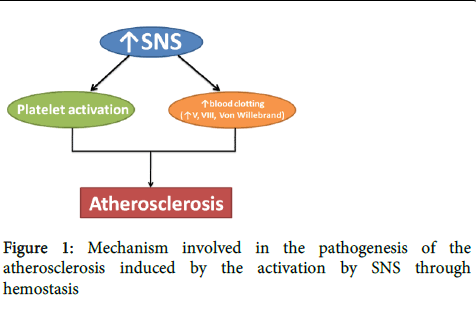 Figure 1: Mechanism involved in the pathogenesis of the atherosclerosis induced by the activation by SNS through hemostasis

Although hastened blood coagulation the impact of SNS activation on hemostasis is not still clearly understood.

Given the significance of increased hemostatic activity in atherosclerosis and the important role of the SNS in cardiovascular disease [17], SNS activation might contribute to arterial thrombus formation. Several studies have demonstrated that SNS activation induced procoagulant responses in patients with atherosclerotic plaques and endothelial dysfunction [18-24]. Adrenaline infusion induces platelet activity and it is higher in hypertensive individuals than in normotensive controls [25-27]. Moreover behavioral stressors, such as mental arithmetic an cold test, led to increase in fibrinogen [28] and platelet activity [29] as well as to impaired fibrinolysis [28,30] in hypertensive individuals compared with normotensive controls. In patients with heart failure, there is an higher platelet activity with acute mental stress than normal controls [31].

Chronic stimulation of the SNS and concomitant hypercoagulable changes could contribute to gradual fibrin deposition at sites of atherosclerotic lesions. Once hemodynamic stress with for instance emotional arousal has triggered rupture of an atherosclerotic plaque [32,33], hypercoagulability due to catecholamine spillover with both activation of the hypothalamic-pituitary-adrenal axis [34] and myocardial ischemia [35-36] may promote coronary thrombus growth. Also, hypercoagulable changes with morning surge in catecholamine levels due to both circadian variation in catecholamine activity and postural change may be related to increased morning frequencies of thrombotic vascular events [37-39].

Future studies on the effects of SNS function on hemostasis mechanisms may further help integrating arduously achieved biochemical and biological knowledge to a better understanding of the regulation of the SNS-hemostasis axis [40].

Copyright: © 2014 Pagano Gennaro et al. This is an open-access article distributed under the terms of the Creative Commons Attribution License, which permits unrestricted use, distribution, and reproduction in any medium, provided the original author and source are credited.