Understanding of soil hydraulic properties and characteristics are crucial for the solution of equations describing the water management under unsaturated soil conditions of the irrigated agriculture in arid regions. However, the accurate estimated of water flux and therefore water availability is of importance environmental issues. Water retention curves describe the relationship between the pressure head and the volumetric water content. Particle size distribution data have been widely used as a basis for estimating soil hydraulic properties and consequently irrigation water scheduling. Hydraulic conductivity of unsaturated soil is one of the most important soil properties controlling infiltration and surface runoff, as well as leaching of the applied agro-chemicals. Hydraulic conductivity depends strongly on soil texture, structure and therefore can vary widely space. Several methods have been developed to investigated and estimate, as well as simulate the soil hydraulic properties from more easily measured soil properties. Some of these methods were described by [1]. Soil moisture is an important factor across a range of environmental processes, including plant growth, soil biogeochemistry, land – atmosphere heat and water exchange [2-4]. Therefore timely and accurate measurements of soil moisture are highly described for on farm irrigation water management. However monitoring of soil moisture distribution uniformity under center pivot irrigation system is highly required for understanding and modeling irrigation systems and maximizing on farm irrigation water unit net return. The uniformity of water application under a center pivot is determined by setting out cans or rain gauges along the length of pivot, bringing the irrigation system up to proper operating pressure, and letting the system pass over them (Record the distance from the center of the pivot and the amount of water collected for each can or gauge. From this information, a coefficient of uniformity can be calculated. The coefficient of uniformity is usually expressed as a percentage [5].

Remote sensing approaches have primarily focused on microwave wavelength, where moisture exerts strong control over soil dielectric properties and where measurements are not impeded by clouds or darkness [6,7]. On the other hand, moisture influences the reflection of shortwave radiation from soil surfaces in the VNIR (400-1100 nm) and SWIR (1100-2500 nm) region of the spectrum (Skidmore et al., 1975). However, quantification of moisture using these wavelengths remains difficult because of significant variability from other soil chemical and physical properties, such as organic matter and mineralogy, as well as vegetation cover [8]. Khairallah et al. [9] investigated the relationship between soil moisture content and soil surface reflectance and indicated that it is feasible to estimate surface (0 to 7.6 cm) soil moisture from visible to near infrared reflectance. However, the main objective of this study was to monitor temporal and spatial changes, in the field water application uniformities along radial and circular lines from center-pivot systems using spray nozzles using soil reflectance as a soil proceeded from wet to dry states and to determine the dependence of these changes on wavelength. Romaguera et al. [10] stated that the volume of water consumed for its production is defined as crop Water Footprint (WF). However, the volume of irrigation applied calculated by mass water balance, and green and blue WF obtained from the green and blue evapotranspiration components. In addition, the combination of data brings several limitations with respect to discrepancies in spatial and temporal resolution and data availability could represent an innovative approach to irrigation mapping. With this point of view, Gutierrez et al. [11] used spectral reflectance indices to estimate the water status of plants in a rapid, non-destructive manner. Water spectral indices as normalized water index NWI were measured on wheat under a range of water-deficit conditions in field-based yield trials to establish their relationship with water relations parameters, as well as, available volumetric soil water (AVSW) to indicate soil water extraction pattern. Therefore, Droogers et al. [12] stated that the irrigation application amounts can be estimated reasonably accurately, providing data are available at an interval of 15 days or shorter and the accuracy of the signal is equal or higher 90%.

Table 1: Some physical properties of the soil at the experimental site.

Due to the variations in the manufacture of the electrical components, lamps, and light sensor, of the readings of this instrument must correct. To correct for these differences between instruments and to move the measurement closer to what happens to the light, measurement of light reflectance is given as the percentage or proportion of light (for each wavelength or color) that reflects from the soil. The display number measurements indicate how much light (of each color) has reflected from the soil, but how much light hit the soil to start with. One way to measure how much light hits the soil and how much is reflected, is to take reflectance measurements of a standard material. Good standards for this experiment are heavy white paper or white poster board, which reflect almost all of the light that hits them, about 85%.

To convert this reflectance proportion to a percentage, simply multiply by 100. Displayed numbers for white paper using different wave lengths are 646, 800, 790, and 836 for 470, 560, 600 and 700 Aº respectively. However, soil water uniformity distribution under center pivot irrigation system had been measured in order to evaluate the efficiency of the portable reflectance spectrometer in detecting water content of the surface layer of the soil within different times of soil depletion up to 96 hrs after shutdown of the irrigation events comparing with the reading of the standard calibration method. However, the investigated time had been selected according to the scheduling time of sprinkler irrigation systems, under arid conditions of Egypt. The observed calibration data and observed correlation equations had been represented in Figure 1 and Table 2. 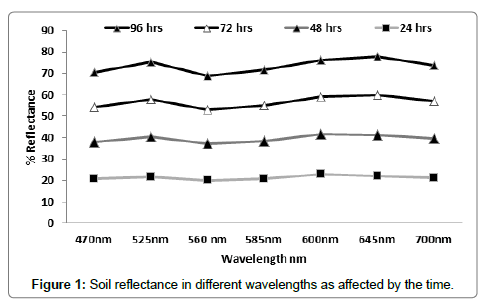 Figure 1: Soil reflectance in different wavelengths as affected by the time.

Table 2: The correlation coefficients (R2) and the linear equations for the relationship between the volumetric watercontent and the percent of soil-spectral reflectance.

ei is the error of the model.

Figure 2 represents the volumetric water content distribution under the center pivot irrigation system as affected by either time after soilmoisture stability time 24 h, 48, 72 and 96 hrs or the distance from the center pivot. Soil- moister contents in the middle distance point, 50 m, were highest compared to the nearest and farthest points; 0 and 100 m, from the center pivot tower. However, all wavelengths of reflectance increased with time progress. The familiar darkening of soil upon wetting is because of a change in the real part of the refractive index (n) of the immersion medium from air (n = 1) to water (n = 1.33) [14,15]. This decrease of the contrast between soil particles (n ~ 1.5) and their surrounding medium, resulting in an increase in the average degree of forward scattering and, thus, an increased probability of absorption before reemerging from the medium. Figure 2: Relationship between soil volumetric water content (O) and the % reflectance in different wavelengths under the center pivot irrigation system.

On the other hand, after 24h, the values of R2 decreased with decreasing the wavelength from 700 nm to 470 nm. The highest R2 values (0.6) were found between % reflectance at 700 nm and the soil moister content. This high to moderate correlation inversed to a very weak correlation which reflected on the R2 values under the other three times, 48, 72 and 96 hours. These results revealed that with decreasing the soil moister content the reflectance becomes independent from the moister and affected by other soil components. These results in agreement with those of Hillel [16] who mentioned that in visible wavelengths, the sole effect of water is in changing the relative refractivity at the soil particle surfaces.

Data analysis of the observed results 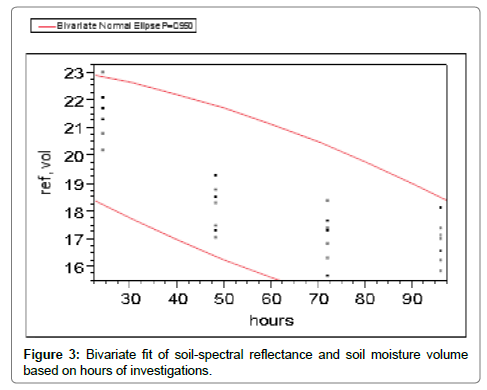 Figure 3: Bivariate fit of soil-spectral reflectance and soil moisture volume based on hours of investigations. 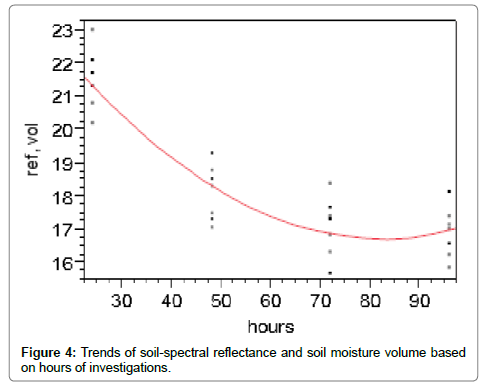 Figure 4: Trends of soil-spectral reflectance and soil moisture volume based on hours of investigations.

Table 3: Correlation analysis of the relationship between measured soil moisture content and soil-spectral reflectance based on hour of investigation.

Table 4: Analysis of the variance between measured soil moisture content and soil-spectral reflectance based on hour of investigation.

The correlation between predicted Volumetric Water Content with respect of hours and spectral response using polynomial second degree equation was quite acceptable with R2 of 0.83 (Table 5).

Copyright: © 2016 Arafa YE, et al. This is an open-access article distributed under the terms of the Creative Commons Attribution License, which permits unrestricted use, distribution, and reproduction in any medium, provided the original author and source are credited.
Top