The incidence of unexpected total fertilization failure in a conventional in vitro fertilization (IVF) cycle ranges from 5% to 20%. One strategy to avoid cycle cancellation is the re-injection of unfertilized oocytes by the so-called “rescue” intracytoplasmic sperm injection (ICSI). This paper aims to report the validity of performing a rescue ICSI after a total fertilization failure in IVF. On May 2017 a 39-year-old woman presented to our Center. After standard controlled ovarian stimulation, four oocytes were retrieved and inseminated by conventional IVF. No oocytes were fertilized 18 hours after insemination. After 3 hours a rescue ICSI was performed and after 18 hours three oocytes had extruded the second polar body and showed two pronuclei. Twenty-four hours later three embryos were developed and transferred to the uterus. A single, uneventful, full-term pregnancy resulted in the delivery of a healthy girl.

In conclusion, hereby we described a healthy childbirth after the transfer of embryos derived from 1-day-old oocytes of a 39-year-old woman. Although the success of the rescue ICSI is still a matter of debate, this case is a further successful pregnancy that proves the validity of the procedure as worth an attempt to give the best chance to the couple in that cycle, without necessarily modify the routine procedures of the laboratory.

Total fertilization failure (TFF) is frustrating and stressful for patients, particularly when semen is apparently normal. The incidence of TFF after conventional in vitro fertilization (IVF) has been reported to range from 5% to 20% [1]. For these patients there are two options. One possibility is the IVF cycle cancellation and to inject oocytes by intracytoplasmic sperm injection (ICSI) in the subsequent cycle, in an attempt to avoid the risk of failed fertilization using IVF insemination again [2]. The second alternative is to apply a rescue ICSI in the index cycle. Although the first rescue ICSI was described 20 years ago [3], the utility of performing such a procedure is still debated [4]. Opponents of rescue ICSI are mainly concerned about 1-day-old unfertilized oocytes aneuploidy that might be the result of the in vitro aging process [5], thus increasing the risk of chromosome aberrations in the embryos [6]. Studies have shown that chromosome abnormalities in human oocytes are closely related to maternal age [7], rather than to be traced back to rescue ICSI. Research on animal models reported that aging affects oolemma, zonapellucida, cortical granules, mitochondria, cytoskeleton, and meiotic spindle [5] as well as alterations in calcium oscillations during fertilization and epigenetic alterations [8]. Overall, these consequences may impair oocyte quality, causing low fertilization, blastocyst formation and pregnancy rates. Some strategies have been offered toimprove the outcomes of rescue ICSI. Rescue ICSI, performed as early as 6 hours after IVF insemination, resulted in more efficient than ICSI done one day after [9-13]. Performance of rescue ICSI can be improved by polarized light microscopy, allowing discriminating between unfertilized oocytes, showing one spindle, and those with two spindles, due to sperm entry [14]. Using a new fresh semen sample was also suggested [15]. Finally, a freeze-all approach in rescue ICSI, allowing synchronization between the development of transferred thawed rescue embryos and the endometrium, seems to overcome low pregnancy rates [16,17].

Early evaluation of oocyte fertilization or the above described strategies are certainly difficult to apply with respect to the daily routine in IVF laboratories. At the same time, the issue of late rescue ICSI is still debated. Therefore, it is important to keep recording clinical outcomes and follow-up of babies born after “conventional” rescue ICSI, without any particular change of the standard procedures. To the best of our knowledge, in literature, there has been the publication of 35 healthy babies (from 19 singletons, 5 twin and 2 triplet gestations) after the transfer of embryos of 1-day-old unfertilized oocytes, in which rescue ICSI was performed by using sperm prepared on the day of oocyte retrieval [15,18-22]. This case report describes further successful healthy childbirth after a transfer of three rescue ICSI embryos derived from 1-day-old oocytes.

A 39-year-old woman presented to our Center in May 2017 with a diagnosis of unexplained infertility and an age-appropriate hormone profile (circulating follicle-stimulating hormone (FSH)=9.2 μg/L and anti-müllerian hormone (AMH)=2.0 ng/ml) after a history of secondary infertility. In January 2017 the couple underwent one ICSI cycle that was cancelled due to TFF of the five injected oocytes. Following such a failure, the quality of the semen was improved by a combined treatment with myo-inositol, alpha-lipoic acid, folic acid and vitamins [23]. Moreover, mixed anti-globulin reaction (MAR test) for both IgA and IgG antibodies resulted negative. 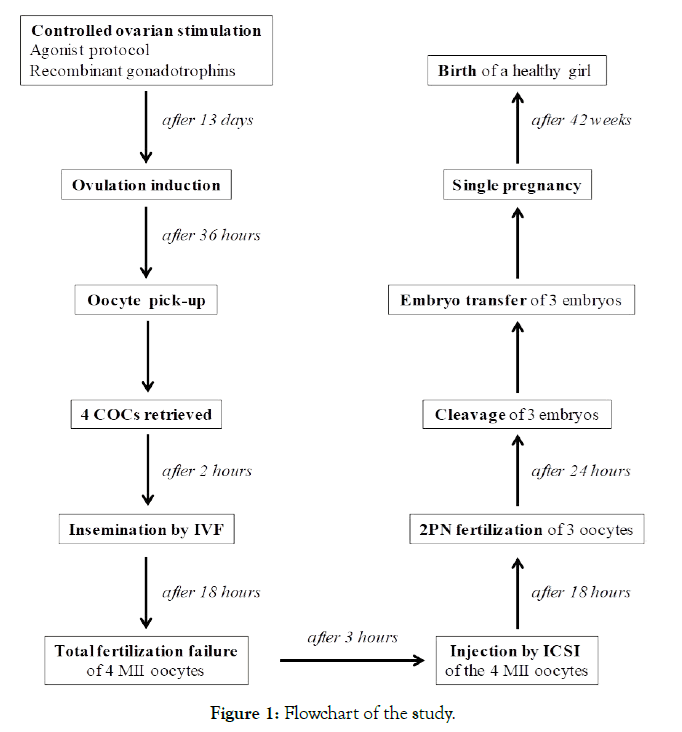 Figure 1. Flowchart of the study.

Demographic and stimulation data, embryological and clinical outcomes as well as neonatal data have been collected by Ferti Lab Manager Software (Pomezia, Italy).

During the last decade, ICSI has become the common practice in many clinics around the world when treating advanced maternalage patients with non-male infertility. Recently, a SWOT (strengths, weaknesses, opportunities, threats) analysis showed that demonstrating effectiveness of the widespread use of ICSI in patients without a formal diagnosis of male factor infertility is still lacking [25]. Similarly, a prospective randomized controlled clinical trial concluded that ICSI does not improve the reproductive outcomes of advanced-age patients undergoing IVF for non-male factor infertility [26]. In line with the above findings, since many years we routinely perform IVF in couples also with advanced maternal age, without a formal diagnosis of male factor infertility and no low fertilization rates in eventual previous IVF cycles. At our Center complete failed fertilization in IVF cycles is uncommon (in the period January 2011-December 2019 it occurred in 29/424, 7% of cases). This is in line with literature data according to the rate of TFF after conventional IVF using apparently normal sperm ranges from 5% to as high as 15%-20% [1]. In IVF cycles we have an average fertilization rate of 71% because, although in a few cases, poor or no fertilization occurs even in presence of normal sperm. In the case of TFF to attempt cycle rescue, we perform injection of unfertilized 1-day-old oocytes by ICSI, reaching a fertilization rate of 48% in such back-up treatments.

Despite the advanced maternal age, the present case had an acceptable chance of IVF success, taking into account patient’s good ovarian reserve according to serum AMH level, and the absence of a male factor. Thus, it was difficult to ascribe whether the failed fertilization could be secondary to either oocyte defects or unsuspected sperm dysfunction. Taking into account the estradiol level and the presence of 4 follicles with a diameter >13 mm at the time of ovulation induction, it is reasonable to assume that the harvested eggs were mature. Moreover, since the 1-day-old oocytes appeared as healthy MII oocytes, with homogenous, light color cytoplasm, absence of debris in the perivitelline space, and a regular zonapellucida (ZP) [27], none morphological sign could explain the failure of sperm penetration [28] or indicated a general oocyte dysfunction [29]. On the other hand, in IVF cumulus cells prevent oocytes’ accurate assessment before insemination. Thus, it was possible that the oocytes failed to fertilize in IVF because they were immature and reached the MII stage in the culture overnight, and could be therefore normally fertilized by rescue ICSI.

In addition, a reasonable explanation of fertilization failure is that apparently normal spermatozoa are unexpectedly unable to bind to ZP [30]. In this case we observed the presence of several spermatozoa attached to ZP, but not surplus spermatozoa in the perivitelline space. Reasonably, we assume that the actual failure occurred at the initial steps of the fertilization process. In this respect, IVF failure in normozoospermic men has been recently associated with altered seminal plasma proteins that modulate the process of sperm capacitation, hyaluronidase activity, acrosome reaction, and thus may negatively influence sperm function [31,32]. In accordance, rescue ICSI, assisting sperm entry into the oocytes by bypassing biological obstacles, resulted beneficial to avoid cycle cancellation.

One of the main criticism about the opportunity to perform rescue ICSI of 1-day-old oocytes concerns that aging of oocytes in culture can result in chromosomally abnormal oocytes and embryos, although this claim is not definitively proved, and delivery of healthy children has been reported [22]. Even though the perspective of a better outcome with an earlier rescue ICSI, one of the concerns when performing rescue ICSI the same day of the failed IVF is the possible delay in second polar body release, as the earliest indication of fertilization. Although this phenomenon is observed in 10% of the oocytes 6 hours after insemination, and two hours later all fertilized oocytes are expected to extrude the second polar body [33], if it occurs in all patient’s oocytes the risk of not identifying fertilized oocytes would be great. Moreover, in the case of fragmentation of the first polar body, correct identification of the second polar body may be difficult. Finally, the visualization of pronuclei may be problematic in case of delay in final oocyte maturation. Aware of these considerations, in order to minimize the risk of double insemination of oocytes, we traditionally perform rescue ICSI on unfertilized oocytes 19-21 hours after insemination.

Although some authors believe that late rescue ICSI should be avoided because of its low success rates and potential genetic risk [5], this case, together with other successful pregnancies [4], prove that rescue ICSI of 1-day-old oocytes should be offered to couples as a back-up option to potentially produce viable embryos which may lead to healthy babies. Actually, it is important to remember that helping infertile couples to conceive a healthy baby is the goal of assisted reproductive treatments. The alternative is the cancellation of the failed IVF cycle, but not all couples can perform another cycle. Although in government Centers the costs of treatments are publicly funded, cycle cancellation would add further emotional strain and frustration to an already stressful treatment. Moreover, it was evaluated that rescue ICSI implies a 25% reduction of the costs per live birth with respect to the cycle cancellation option [22].

We are aware that various strategies seem to improve rescue ICSI outcomes, although some of them are logistically inconsistent with the daily routine i.e., evaluating oocytes 8-10 hours postinsemination, or the unavailability of polarized light microscopy in most IVF Centers.

Moreover, it is notable that our patient was 39 years of age. Therefore, this case proves that unfertilized oocytes also from aged women can have developmental competency after rescue ICSI.

Hereby, we described a successful full-term pregnancy and healthy childbirth after the transfer of embryos derived from 1-day-old oocytes of a 39-year-old woman. Therefore, we believe that for clinical practice in the case of TFF, the rescue ICSI of 1-day-old oocytes may be an efficient attempt to give the best chance to the couple to become pregnant in that cycle, without necessarily modify the routine procedures of the laboratory.

We are grateful to Mrs. Laura Bacigalupo, Mr. Martino Borra, and Mrs.AntonellaSanti working as nurses at the UOS Physiopathology of Human Reproduction of IRCCS OspedalePoliclinico San Martino, Genova.

Copyright: © 2020 Massarotti C, et al. This is an open-access article distributed under the terms of the Creative Commons Attribution License, which permits unrestricted use, distribution, and reproduction in any medium, provided the original author and source are credited.