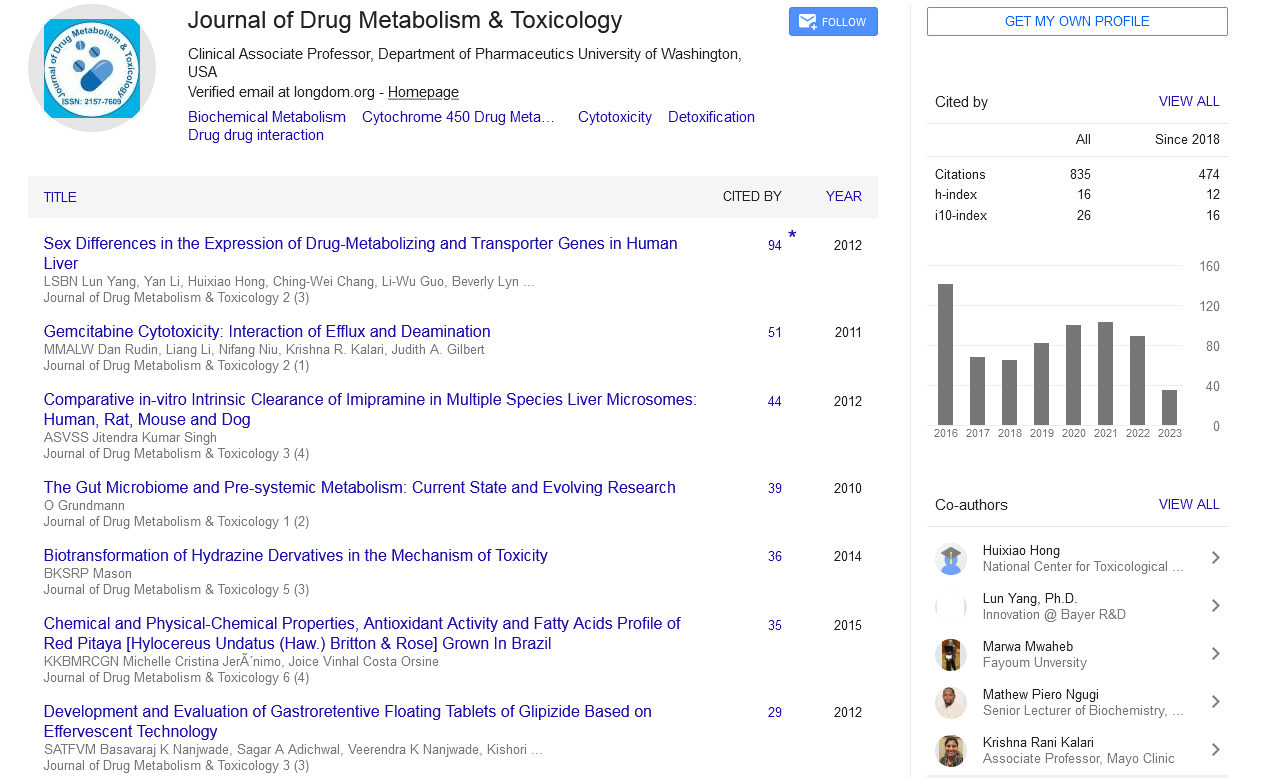 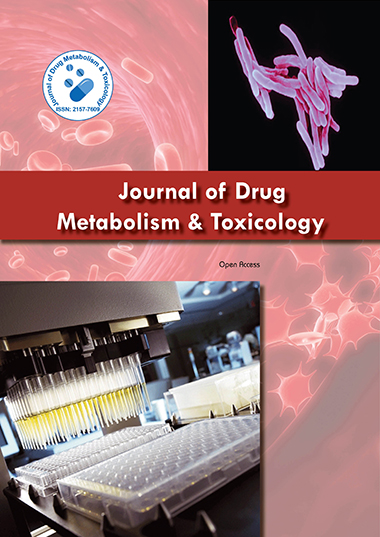 Objectives: Despite the potential health risks, Paracetamol is commonly misused for management of hangover among regular users of alcohol. Studies on the combined use of the two drugs are limited and controversial. The aim of this study was to evaluate the effects of the interaction of the two drugs on the biological parameters of a rat model.

Results: Alcohol induced a dose and time dependent gain on body weight, but when used in combination with paracetamol the effect was mixed. When used independently and combined, the drugs did not affect (p>0.05) the hematological profiles. For blood chemistry, the drugs caused a dose dependent elevation of liver enzymes, bilirubin, urea, reduced albumin levels and various degrees of liver and renal pathology.

Conclusion: In moderate doses, Paracetamol is safe but high doses and chronic use of alcohol causes hepatotoxicity. Individually, alcohol and Paracetamol have a low risk of renal damage but when used together the risk is increased. Thus, regular use of Paracetamol in management of alcohol induced hangover is discouraged as this increases the risk of liver and kidney diseases.

The lips or labium oris are two fleshy folds surrounds the orifice of the mouth. They are composed of skin, muscle and mucosa. Lip skin consisting of flat, scale-like cells in three to five cellular layers. The skin of the lips has no hair follicles, no sweat glands and no sebaceous glands. The mucous membrane of the lip is full of capillaries (tiny blood vessels) that are close to the translucent surface, giving it a reddish color. Lip skin composed of stratified squamous epithelium tissue, which only means that the cells are arranged in layers [1].

Autism has been one of the major diseases affecting children’s in today scenario [2]. Risperidone, an antipsychotic drug, is supposed to be effective in treating behavioural disturbances in children with autism spectrum disorder (ASD). At present, risperidone is administered orally or by injection. It is usually administered as one or two daily oral dose, for an overall dosage of 4-16 mg/day [3].

The low-dose risperidone maintenance therapy is required to control the ASD in children’s and long-term prophylactic treatment is needed to prevent relapses. Long-acting modified dosage forms of risperidone are going to be effective in patients and can help in addressing the problem of poor patient compliance [4]. The use of this drug in the lowest possible effective dosage is recommended for minimizing the risk of major side effects. Based on these hypotheses, a rate controlling bioflexi translabial drug delivery system was developed.

Zea mays belong to family poaceae. Seeds of Zea mays composed of carbohydrates, sugars, dietary fibers, fat, protein, tryptophan, lucine, lycine and vitamins. It is used as a diuretic, reducing stone formation in kidney and so many medicinal uses [5].

In this research work Risperidone selected as a molecule for designing a bio-flexi film using novel bio-stabilizer and compared with standard polymer. This can be overcome by minimizing the dose as well as side-effects of API molecule used for various routes. The bio-stabilizer was isolated from the seeds of Zea mays and characterized by IR, DSC, SEM analysis, NMR spectroscopy studies and cell-line toxicity studies. The risperidone loaded bioflexi films were developed by novel method using biopolymer as a bio-stabilizer. Further, formulations were comparatively evaluated for folding endurance, drug content, thickness of the film, in vitro drug release, in vitro permeation and stability studies. As on date the literature reveals that no attempt was made to deliver the risperidone moiety to brain via translabial route. In this research paper, the formulation and optimization of bio-flexi films of risperidone is addressed along with the performance characteristics of best formulation.

Risperidone (assigned purity, 99.8%) was a gift from Life care neuro Private Limited (Baddi, Himachal Pradesh, India). Zea mays were purchased from the market of Dehradun, Uttarakhand, India. All other chemicals and solvents were of analytical grade.

500 gm seeds of Zea mays was procured from the market and soaked overnight. The seed was converted into slurry with the help of grinder by adding 50 ml of distilled water .Then 150 ml of distilled water was added in slurry and mixed well and kept in refrigerator for 24 hrs. The slurry was centrifuged at 3000 rpm for a period of 15 minutes and the supernatant was removed from the sediment layer. The acetone was added in to supernatant of slurry in 1:1 ratio after optimization and kept for 24 hrs in refrigerator. Then sediment layer was separated from acetone and dried in vacuum desiccator for 14 hrs. The dried powder was purified by the hot dialysis method using an ORCHID scientific dialysis apparatus for complete removal of impurities like chlorides and sulphates. The procedure was optimized by repeating six times and the percentage yield was calculated. The purified bio-retardant was screened through 200 mesh and stored [6].

The interaction between the drug and polymers was determined by using the FTIR spectroscopy where infrared spectra of risperidone and biopolymer (1:1) were taken individually first and then compared with the spectra of the combinations. The scan range was from 4000 to 500 Cm−1 [7].

A polymeric solution (3% w/v) was prepared by dissolving Zea mays with risperidone (20% w/w of dry weight of polymer), dextrose as a plasticizer, and sween-80 as a permeation enhancer in methanol: water (1:1) as a solvent system. First, the solution was prepared with different ratios of polymeric blend without adding sween-80 as a permeation enhancer. The composition of prepared bioflexi film is given in Table 1.

Then again, the films were developed using the procedure mentioned above on adding one drop of sween-80 and stirred for 45 min on magnetic stirrer to accomplish homogeneous mixture. After mixing the drug and polymer, solution was allowed to stand for 15 min to remove air bubbles and the solution is poured in the Petri dish. The solvent was allowed to evaporate at 40°C for 24 hrs to achieve drug-polymer bioflexi film. After 24 h, the film was collected and stored in desiccators until further use (Table 2).

The bio-flexi were evaluated for uniformity of weight, folding endurance, drug content, thickness of the film, in vitro drug release, in vitro permeation study and stability studies.

Drug content determination: An accurately weighed portion of film was dissolved in 100 mL of methanol in which drug is soluble and then the solution was shaken continuously for 24 hrs in a mechanical shaker. Then, the whole solution was sonicated. After sonication, drug in solution was estimated spectro photo metrically by dilution [9].

In vitro release studies: It is needed to maintain greater drug concentrations at the lip skin than in the body. This is required to achieve a constant rate of permeation. The permeation study using Franz diffusion cell with a capacity of 35 mL carried out at 32°C ± 0.5°C. A section of film was cut and placed in donor compartment keeping backing membrane on the upper side. This whole assembly was kept on a magnetic stirrer and the solution was stirred continuously using a magnetic bead. Phosphate saline buffer of pH 7.4 with 0.5% sween-80 was used as a media for permeation studies. A similar set was run simultaneously without using the film at the donor compartment egg membrane as a control. The samples were withdrawn at different time intervals and replaced with equal amount of dissolution media and then analyzed using a UV spectrophotometer at 322 nm [12].

In vitro permeation studies: The in vitro permeation studies were carried out in a Franz diffusion cell with a capacity of 35 mL, using eggshell membrane. A section of eggshell membrane was cut and placed in the donor compartment, and the film was placed on the membrane. The holder, containing the egg membrane and the formulation, was placed on the receiver compartment of the cell containing phosphate saline buffer of pH 7.4 with 0.5% sween-80. The temperature of the cell was maintained at 32°C ± 5°C by circulating water jacket. This whole assembly was kept on a magnetic stirrer and the solution was stirred continuously using a magnetic bead. A similar set was run simultaneously without using the patch at the donor compartment as a skin control. The samples were withdrawn at different time intervals and replaced with equal amount of dissolution media. Samples were analyzed spectro photo metrically at 322 nm and the amount of drug permeated per cm2 of patch was calculated from the standard curve and plotted against time. The difference between the readings of drug skin permeation and skin control was used as the actual reading in each case [13].

Stability studies: Stability studies were conducted as per ICH Guidelines Q1B. Stability testing of pharmaceutical product is done to ensure the efficacy, safety and quality of active drug substance and dosage forms and shelf life or expiration period. Stability of the bio-flexi film was investigated for six months at ambient condition to monitor the change in appearance, physical characteristics and release behaviour. Bio-flexi film of Risperidone from same batch were kept under two different conditions (25°C ± 2°C, 60% ± 5% RH and 40°C ± 2°C, 75% ± 5% RH) [15].

Isolation of the biomaterial

The novel bio-retardant was isolated from by simplified economic process. The optimization of bio-stabilizer isolation process was repeated six times for and the %yield was calculated. During optimization the results obtained were reproducible with insignificant variation and can be adopted for scaling up in bulk manner. The %yield for biomaterial from seeds of Zea mays was found to be of 10%w/w ± 2%.

IR spectroscopy: The result of IR spectra of bio-retardant isolated from Zea mays showed revealed the presence of amides (1633 cm- 1), amines (3300 cm-1), and carboxylic acid (1320 cm-1). These functional groups are responsible for adhesion activity of the biostabilizer (Figure 1). 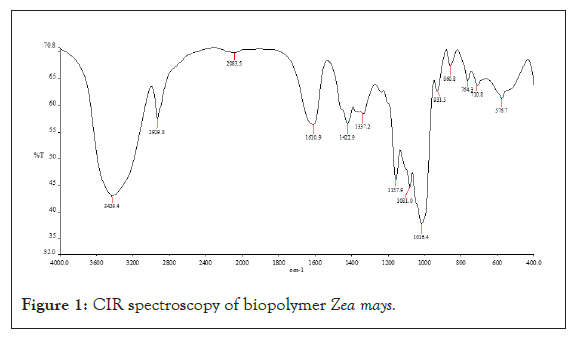 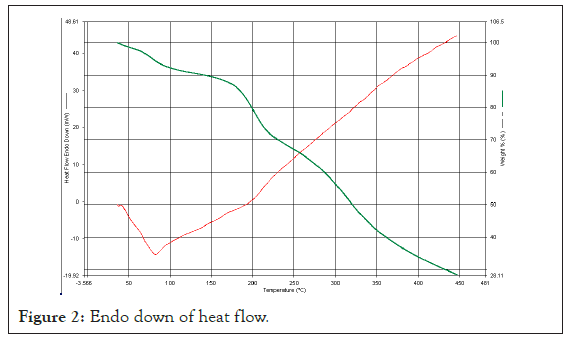 Figure 2: Endo down of heat flow.

Scanning Electron Microscopy (SEM): The topology of biostabilizer isolated from Zea mays observed irregular, smooth surface topology with 100 μm in size at 1,000 magnifications. This clearly indicates it is granular and polymeric in nature (Figure 3). Nuclear Magnetic Resonance (NMR): 1HNMR Spectra confirms the presence of carbohydrates residue within the bio-stabilizer extracted as shift of carbohydrate ring protons are 3-6 ppm and the spectra when compared reflects the peak at 3.4111 ppm (Figure 4). 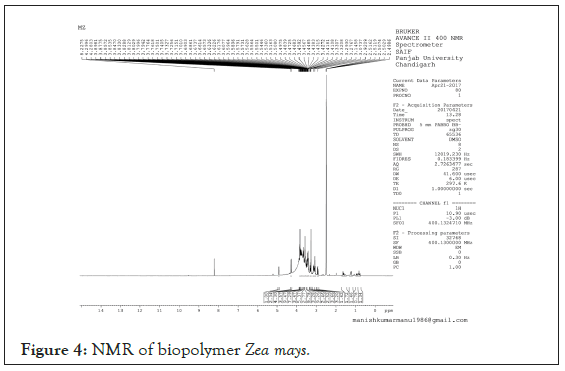 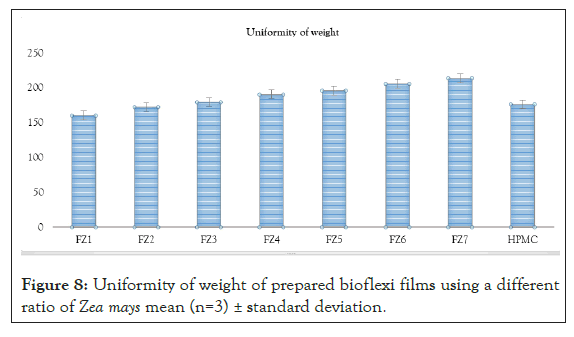 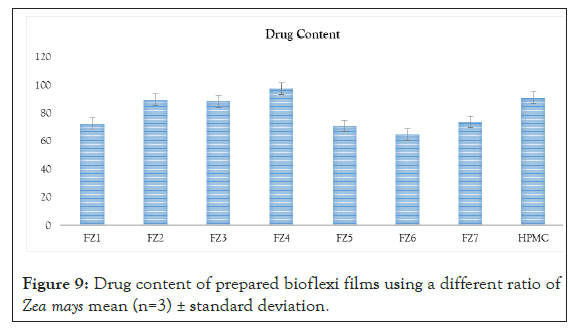 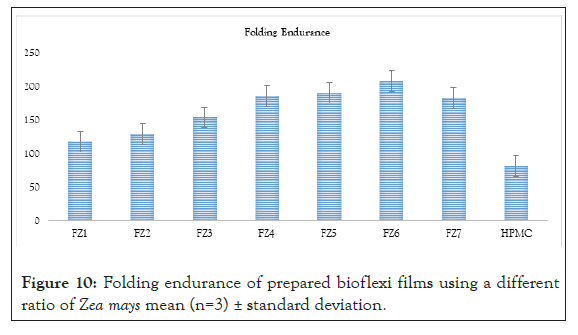 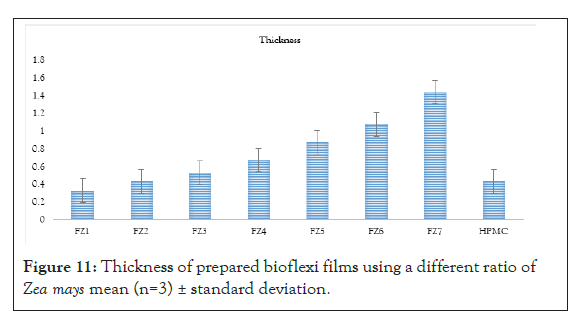 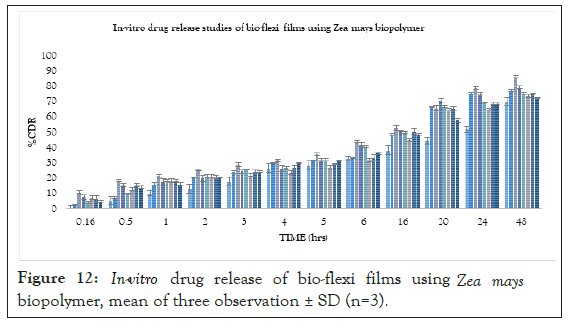 Where, from standard polymer, the FS4(4%) formulation was found to be the best formulation showing an R2 value of 0.9564, T50% of 25 hrs and T80% of 60 hrs respectively. According to the release kinetics the best fit model was Higuchi model and mechanism of release was non-Fickian mediated as the mechanism of drug release (Figures 13-16). 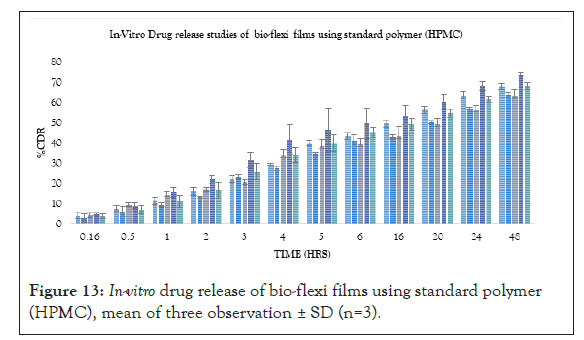 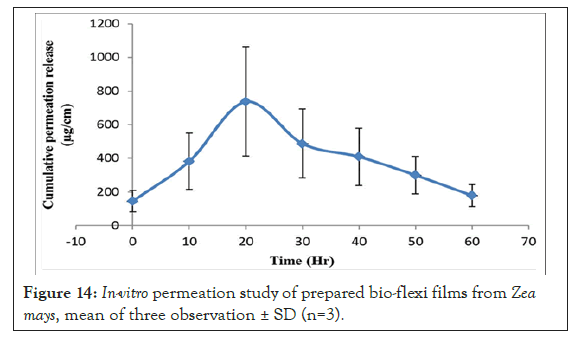 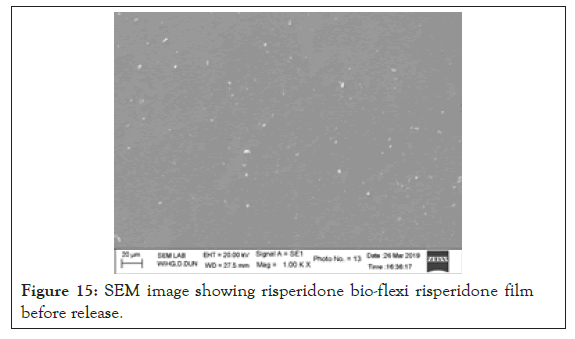 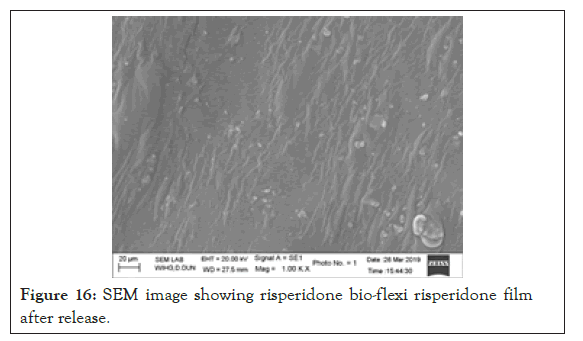 At the end of stability study, the formulated bio-flexi film showed little to no drug loss. The bio-flexi film also showed an insignificant difference for in vitro drug release. All optimized formulation showed satisfactory drug release and other properties during and at the end of the accelerated stability period. This indicates that there was no influence on the chemical and physical stability of the formulation during the test period (Figure 17). 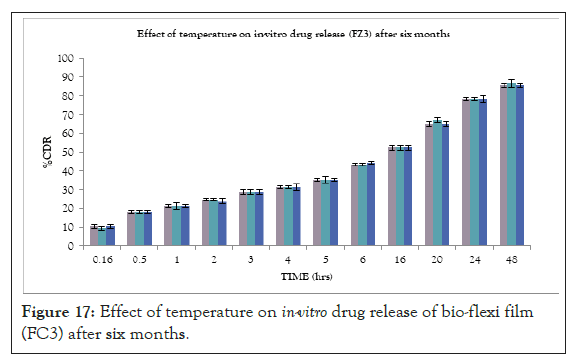 This biopolymer has the desired properties for safe use in biomedicine, Zea mays biopolymer as a bio-stabilizer and can be considered as promising material for the development of safe and effective drug delivery systems owing to their unique physicochemical characteristics. This biopolymer enhances the residence time of the system and consequently the bioavailability of the drug.

The isolated bio-stabilizer was non-toxic and biodegradable as it extracted from the natural edible sources and compatible with the translabial delivery for the treatment of psychosis. This is a novelistic approach significantly delivering the drug for prolonged period and the biopolymer was served as a promising excipient for delivering dosage forms Zea mays.

All authors have none to declare.

Copyright: © 2021 Singh B, et al. This is an open-access article distributed under the terms of the Creative Commons Attribution License, which permits unrestricted use, distribution, and reproduction in any medium, provided the original author and source are credited.