During our genetic research to find an association between genetic defects and idiopathic male infertility, we found amongst 200 patients studied, a rare balanced reciprocal translocation between the short arm of chromosome X (p22.2) and the long arm of chromosome 9 (q31) in two infertile brothers. Our finding was confirmed by Fluorescence in Situ Hybridization (FISH). Microdeletion of the long arm of the Y chromosome was done for both brothers, and no microdeletion was found. A conventional cytogenetic study was done to their mother, revealed the existence of the same translocation, indicating that the translocation found in both brothers is inherited totally from the mother. These findings show clearly the important role of X-autosome translocation in causing Azoospermia and male infertility in male carriers.

Infertility is a very common health problem, affecting approximately 15-20% of couples trying to conceive [1]. Male factor is assumed to be responsible in about 40–50% of the infertile couples [2-4]. Idiopathic male infertility accounts for more than 30% of all male infertility cases [1]. Among these cases, genetic analysis revealed a variety of causes, mostly chromosome aberrations or mutations in functional genes [5]. Investigation of these causes is a major step in diagnosis and management of infertile men, and is crucial to prevent passing genetic defects to offspring in future generations by in vitro fertilization procedures [6].

A relationship between structural chromosomal abnormalities and infertility has been reported among azoospermic men [7,8]. Reciprocal translocations between a sex chromosome and an autosome have been reported sporadically in context of scanning male infertility [9-11].

A 27 years old male presented to assisted reproduction unit at Orient Hospital with azoospermia case. His phenotype was normal, his physical examination for his genital organs and his previous medical history was negative. Upon questioning the patient we found that he was married three years ago, and has only one brother. The brother is 25 years old, with Azoospermia case as well. Also we found that his mother had three spontaneous miscarriages at the first trimester of pregnancy, after giving birth to a female daughter who lived for only three days and died as illustrated by family pedigree (Figure 1). We asked the proband patient to bring his mother and brother for medical examinations and further studies. Both the mother and the brother were phenotypically normal.

Figure 1: Family pedigree of the proband.

Conventional chromosome analysis was performed to the mother and her two sons on peripheral blood lymphocytes, by means of GTGbanding method, as described previously [13]. At least 30 well spread metaphases, were examined for the patient and his mother and brother.

All slides were examined using Nikon Eclipse E800 microscope, with the aid of special computer software (Cytovision) for analysis. Chromosome analysis of a maternal cousin was done to evaluate further family history.

Normal male genomic DNA and Non-Template DNA (NTC) were used with each set of samples as negative control and to detect contamination respectively. DNA extraction and mix preparation were performed by female technician, to avoid male genomic contamination. Unamplified STS was confirmed by additional two experiments. A written informed consent was signed by the patients and their mother before blood sampling. 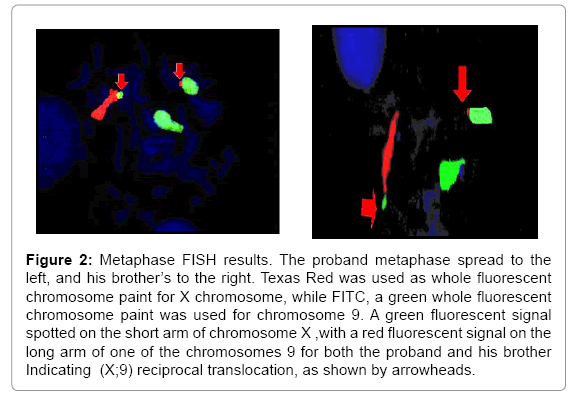 Figure 3: Karyotype result of the proband. Arrows point to the site of translocation on the aberrant chromosomes. Figure 4: Represents the brother karyotype result. Arrows point to the site of translocation on the aberrant chromosomes. Figure 5: The mother karyotype result. Arrows point to the site of translocation on the aberrant chromosomes. 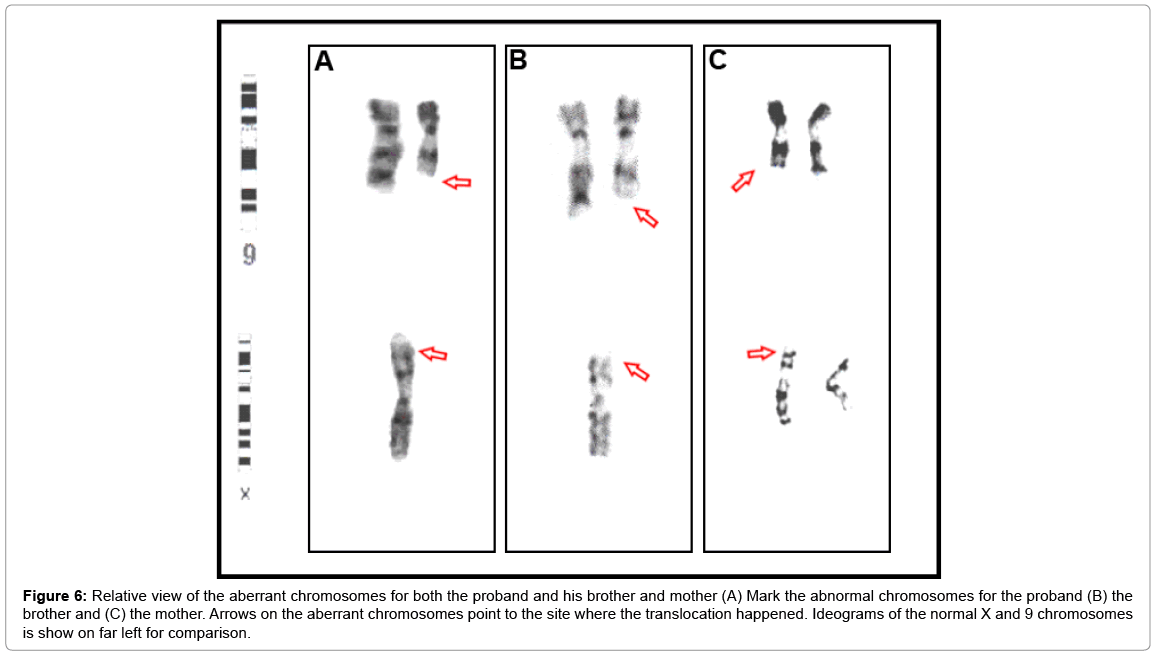 Molecular study didn’t show any evidence of microdeletions on the long arm of Y chromosome.

The phenotypic appearance of translocation cases normally depend on several factors including the nature of the translocation: X-autosomal, Y-autosomal, or X-Y chromosomal exchange, as well as the pattern of inheritance, segregation, and gene inactivation [17,18]. In addition reciprocal translocations between sex chromosomes and autosomes mostly are abnormal and appear to contribute significantly to primary infertility [10]. X-autosome translocations can affect fertility where chromosomal changes result in inactivation of genes governing reproduction [19]. In male carriers, azoospermia is the most common finding, although a few cases have been reported with severe oligozoospermia [20]. In our study both the proband and his brother have normal phenotype, although suffering from azoospermia, this seems quite common amongst balanced reciprocal translocations carriers [21]. Translocations involving a portion of the X chromosome have a profound impact on spermatogenesis, as indicated by the failure of most spermatocytes to enter into meiosis [22]. This may explains the testicular biopsy results of our proband patient, which showed Maturation Arrest (MA) in early stages of spermatogenesis in both testis.

Spermatogenesis generally is much more sensitive to meiotic disruption than oogenesis due to a number of meiotic cell cycle checkpoints [23]. Disturbance of chromosome pairing around the breakpoints was evident, as was non‐homologous pairing in some cells [24]. Unpaired regions of balanced chromosomal rearrangements tend to pair with any available unpaired region (like those of sex chromosomes) at pachytene, and this has been associated with meiotic arrest [25].

We did not observe any AZF microdeletions in the long arm of Y chromosome, in both the proband and his brother, indicating that their male infertility case does not involve the disturbance of the AZF region.

Female balanced X-autosome translocation carriers are clinically heterogeneous group of patients [26]. They can be classified into four broad phenotypic categories. Normal phenotype with a history of Recurrent Miscarriages (NRM)has some form of Gonadal Dysfunction (GD). Have a well-defined X- linked recessive or dominant disorder (XLD), or have congenital abnormalities and /or development delay [21]. In our present study the mother of our proband falls under the first category (NRM); since she has a normal phenotype with no clinically recognizable dysfunction and has a previous history of three spontaneous miscarriages. The sudden death of her female daughter could be due to the presence of severe chromosomal abnormalities which are unviable.

The rareness in this study comes from the fact that both male sons had inherited the same translocation from their mother. In order to reveal whether this rare translocation has been inherited and runs in the family, a chromosome analysis was performed to a maternal cousin (Figure 7). The later had normal karyotype, suggesting that the translocation had been appeared as a de novo event at one of the mother’s parents’ gonads. Finally, we strongly recommend the need for proper evaluation of all cases of male infertility includes taking a careful patient and family history, physical examination, chromosomal and molecular analysis.

Copyright: © 2014 Alhalabi M, et al. This is an open-access article distributed under the terms of the Creative Commons Attribution License, which permits unrestricted use, distribution, and reproduction in any medium, provided the original author and source are credited.