Methods: 60 parturients undergoing elective Cesarean delivery under combined spinal epidural anesthesia were enrolled and randomized into 3 groups. Bilateral TAP block was performed postoperatively using 15 ml solution on each side. Arm 1 received 0.5% bupivacaine, arm 2 received 0.25% bupivacaine and arm 3 received normal saline. All patients received epidural morphine after the umbilical cord was clamped. Pain and other parameters were assessed at 0 h, 3 h, 6 h, 24 h, and 48 h postoperatively. The primary outcome is the number of PCA boluses used by the patients postoperatively within 24 h. Appropriate statistical tests were used.

Conclusion: 0.5% and 0.25% bupivacaine TAP blocks were associated with reduced pain scores, decreased PCA requirements, and greater satisfaction than placebo. We conclude that 0.25% bupivacaine is ideal for use in TAP block as a part of multimodal analgesic regimen that includes neuraxial morphine in cesarean section patients.

Transversus Abdominis Plane (TAP) blocks have been used for postoperative analgesia following lower abdominal surgery since first described by Rafi [1] in 2000. Originally, TAP blocks were performed without visualization, using tactile sensation to locate the fascial plane between the internal oblique and transversus abdominis muscles, within the landmark known as the Triangle of Petit. It is now possible to perform these blocks with in-plane needle localization under ultrasound guidance, which allows real-time visualization of the anatomy and the approaching needle. The result is a low risk abdominal wall nerve block which may improve postoperative conditions including pain, nausea, ambulation, and overall patient satisfaction, and which may potentially allow for earlier discharge.

Cesarean delivery is the most commonly performed operation in the United States [2]. Current postoperative pain management regimens typically include a combination of neuraxial opioids, intravenous opioids, Non-steroidal Anti-Inflammatory Drugs (NSAIDs), and acetaminophen. While generally being well tolerated, NSAIDs and acetaminophen have a limited ability to treat postoperative pain in major abdominal surgeries. Neuraxial and IV opioids often provide more complete analgesia, but cause an array of uncomfortable side effects, including nausea, sedation, ileus, pruritus and respiratory depression [3]. One analgesic strategy to reduce the incidence of these side effects is to reduce opioid dosing while using a supplemental technique such as a TAP block.

Pain after a Cesarean delivery is both somatic (incisional, body wall) and visceral (uterine and other intraperitoneal structures). In the neuritis, opioids have proven particularly effective at reducing the visceral component of postoperative pain. Neuraxial local anesthetics are generally considered to be more effective at blocking somatic pain but do not allow for ambulation and often require more monitoring and staff involvement. The TAP block is a single-shot, low-risk alternative to neuraxial local anesthetics for post-cesarean somatic pain control. Pfannensteil incision usually involves dermatomes from T11 to L1; TAP block usually covers the dermatomes from T7 to L4 [4].

Studies have been done to determine the efficacy of TAP block as a part of multimodal regimen [5] and McDonnell and colleagues demonstrated that a TAP block reduces morphine requirement after abdominal surgery, including Cesarean delivery [6,7]. However, a literature search did not reveal any investigation assessing the efficacy of different concentrations of bupivacaine in TAP blocks.

The study was approved by the hospital Institutional Review Board and registered with the United States clinical registry. www.clinicaltrials.gov, ID # 367620. Informed consent was obtained from each study participant.

Sixty consecutive eligible parturients (i.e. ASA 2) undergoing Cesarean delivery at New York Methodist Hospital were selected for this study from April to August 2013. Risks including infection, bleeding, peritoneal perforation, organ perforation, and unintentional femoral nerve block were explained to the patients. The parturients were given handouts regarding the TAP block. Patients were excluded if there was a history of relevant drug allergy, patient refusal, history of opioid abuse, weight <60 kg, contraindication to neuraxial anesthesia, ASA physical status 3 or 4, placental disease, multiple gestation, or preeclampsia.

After informed consent was signed and inclusion/exclusion criteria were met, each patient was assigned a code number and was randomized via a computer generated randomization chart to one of the three arms.

Staff not directly involved with the block or data acquisition were un-blinded and prepared the medication. All staff providing direct care and the collection of data were blinded to the group assignment. The patients were randomized into 3 groups of 20 patients each. All received a TAP block with 15 ml of a study solution injected on each side (total 30 ml). Patients in Arm 1 received 0.5% bupivacaine, patients in arm 2 received 0.25% bupivacaine and patients in arm 3 received normal saline. Patients were not aware of which TAP block medication they received.

All patients received the same standardized treatment before and after the Cesarean delivery. Preoperatively patients received 30 cc of sodium citrate, 10 mg of oral metoclopramide and 300 mg of oral cimetidine. Patients received a combined spinal epidural anesthetic with 1.6 cc of hyperbaric 0.75% bupivacaine and 25 mcg of fentanyl injected intrathecally. Epidural lidocaine 2% was available for intraoperative pain. IV Ondansetron 4 mg was given for antiemetic prophylaxis and epidural morphine 3 mg was given after the umbilical cord was clamped. Postoperatively patients received IV acetaminophen 1 gm every 6 h and oral celecoxib 200 mg every 12 h for 48 h. They also received an intravenous morphine PCA for 48 h with the following settings: basal rate zero, bolus dose 1 mg, lockout time 10 min, maximum hourly dose 6 mg.

The primary outcome was the number of PCA boluses used by the patients within 24 h. The number of PCA boluses taken by the patient within 0 h, 3 h, 6 h, 24 h, and 48 h after the TAP block was reported. A graduated 100 mm visual analogue scale was used to subjectively assess the pain score at 0 h, 3 h, 6 h, 24 h, and 48 h. The scale is divided in millimeters with short lines, with long lines every 5 millimeters and longer lines for the tens with the number next to the line of tens to easily quantify the pain score.

The sample size was determined by considering an institutional statistics report that showed the mean number of PCA boluses used by patients after Cesarean delivery within 24 h was 18 (SD 12).

The randomization table (4 blocks of 15) was generated and the allocation assigned to cases accordingly, written in paper for each case and sealed in an opaque envelope with the case number on it. The envelopes were kept in a safe place, and viewed only by the unblinded investigator preparing the study drugs.

Statistical analysis was performed using STATA, version 13.1. The primary objective was to compare the analgesic effect of a TAP block using 0.5% bupivacaine, 0.25% bupivacaine or normal saline utilizing pain scores and the number of PCA boluses. It was assumed that the addition of the TAP block using 0.5% bupivacaine would reduce the mean use of PCA boluses to 9 (SD 6). We added the 0.25% bupivacaine arm to study the non-inferiority between the two concentrations of bupivacaine. The calculated sample size would then be 18 for each of three groups to prove the hypotheses with a type I error of 0.05 and a power of 80%. The sample size was further adjusted to 20 cases in each group for a total of 60 patients.

Sixty consecutive eligible parturients (i.e. ASA 2) undergoing Cesarean delivery at New York Methodist Hospital were selected for this study from April to August 2013. The trial ended in August 2013 as the adequate number of participants for the trial was reached.

Sixty subjects were enrolled in the study. All of them completed the study. There were no significant differences in age, gestation, parity, or number of previous Cesarean sections among the groups (Table 1). 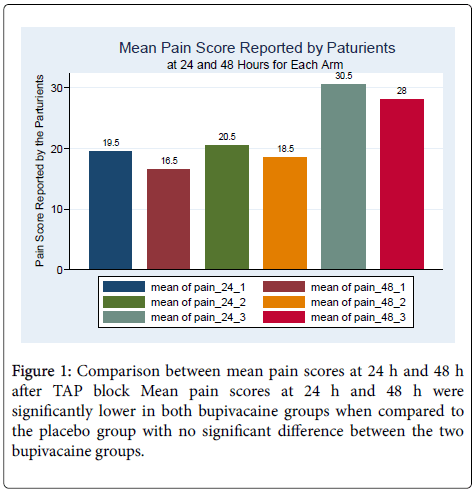 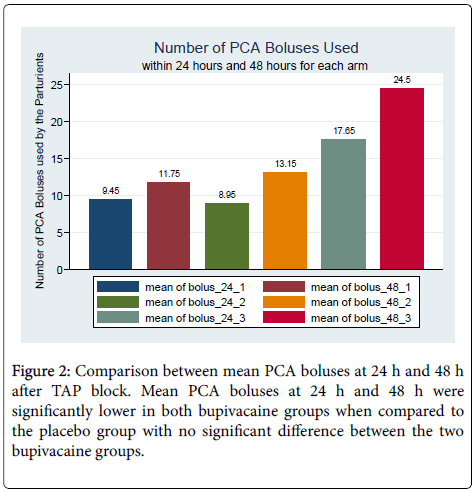 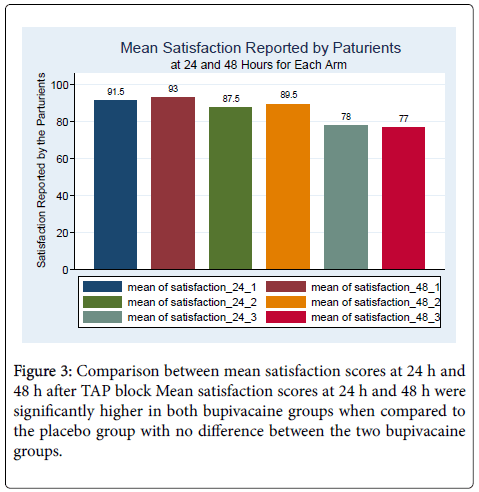 There was no significant difference noted among groups in the secondary measures such as nausea, pruritus, ability to ambulate, ability to tolerate food and the discharge readiness (at 48 h) of the patients.

There were no adverse events noted during the course of the study.

Cesarean delivery is one of the most commonly performed surgical procedures worldwide, with more than one million patients undergoing this procedure annually in the United States alone. There is considerable benefit in formulating an analgesic regimen that is safe and effective, with minimal side effects for the mother and her newborn. Regional anesthesia has been proven to provide reduced pain intensity, decreased incidence of analgesics side effects, and improved patient comfort level [9,10].

Our study demonstrated that the addition of TAP block to a multimodal post-Cesarean analgesic regimen results in improved analgesia and a reduction in opioid usage. Cesarean delivery patients are typically expected to recover quickly and start caring for their newborn baby. Unlike many other patients recovering from abdominal surgery, they do not have the luxury to rest extensively.

Many also want to minimize their systemic opioid intake so as to avoid transfer to the newborn in their breast milk. TAP block is clearly an effective way to enhance analgesia beyond that achieved with neuraxial opioids, while reducing systemic opioid requirements.

Overall patient satisfaction in the bupivacaine groups was greater than that in the placebo group. In this era of health care in which respecting patient autonomy is increasingly emphasized, patient satisfaction is becoming an important metric of clinical care. Hospitals and clinicians will be judged in part by the satisfaction of their patients. We demonstrated that TAP block is an effective way to improve satisfaction.

Our trial failed to show any advantage of TAP block over placebo in terms of nausea, which had been demonstrated in a previous trial6. This may be related to the use of epidural morphine in all of our study groups.

No randomized controlled trials have compared the efficacy of 0.5% and 0.25% bupivacaine in TAP blocks in cesarean delivery patients. Although there were some differences in the amount of opioid consumption and pain score, the differences between the two bupivacaine groups were not statistically or clinically significant. The recommended maximum dose of bupivacaine is 2.5-3 mg/kg as per the FDA11. For lower abdominal surgeries with a Pfannenstiel incision, 0.5% bupivacaine can be used so long as the toxic limit is not exceeded. However, for midline abdominal surgeries, where the volume for the TAP block needs to be greater in order to cover the lower thoracic segments, 0.25% bupivacaine may be preferred. Further trials might examine if there exists any difference between 0.5%, 0.25%, and 0.125% bupivacaine.

An initial hypothesis was that only patients who received a bupivacaine TAP block would meet the discharge readiness criteria at the end of 48 h. We were surprised that patients in all three study arms met the discharge readiness criteria at 48 h. This might be because the analgesic regimen used in all three groups included an aggressive analgesic regimen of IV acetaminophen q6 and celecoxib 200 mg q12 for 48 h, in addition to the epidural morphine and IV morphine PCA.

The TAP block should be particularly useful for patients who undergo emergency Cesarean delivery, requiring general anesthesia. Typically, these patients are given IV morphine PCA or other systemic opioids for pain control. TAP block in these patients will likely allow a significant reduction in opioid usage, with a reduction in opioid side effects, opioid transfer in the breast milk, and improved patient satisfaction.

In summary, our trial demonstrated the analgesic efficacy of ultrasound-guided TAP block in Cesarean delivery patients. Since there was no significant difference between 0.5% and 0.25% bupivacaine, 0.25% bupivacaine is the ideal choice of local anesthetic for use in the TAP block. This block has an opioid sparing effect, and improves patient satisfaction. TAP block may be considered as a part of multimodal analgesic regimen in all Cesarean delivery patients. Given appropriate training, it is easy to perform, provides reliable, long lasting analgesia, and improves patient satisfaction.

We would like to thank Dr. Adel Guirguis MD MS, for his help and support in the bio statistical analysis of our data and Mogana Jayakumar, medical student, for her assistance in recruitment of patients.

Copyright: © 2017 Balasubramaniam P, et al. This is an open-access article distributed under the terms of the Creative Commons Attribution License, which permits unrestricted use, distribution, and reproduction in any medium, provided the original author and source are credited.
Top
betsoobetasus girisdumanbetkralbet supertotobet girisbetmatik giris adresimariobetbetturkey giris bahiscom girisasyabahis girisasyabahis giris