Sebaceous hyperplasia is a benign proliferation of sebaceous glands located predominately on the face. These lesions can be a significant cosmetic concern in men and women, prompting patients to seek out methods of removal. Treatments in the past have been aimed at destroying these lesions with the use of cryotherapy, electrocauterization, curettage, surgical excision, and chemical ablation, all of which had substantial risk associated [1-3]. Significant adverse effects common with these procedures include pain, scarring, dyspigmentation, prolonged recovery time, and high rate of recurrence, thus limiting these modalities as appropriate treatment options. The risk of adverse effects has prompted the use of laser therapy. In 1997, Schönermark et al. first reported the use of PDL for the treatment of sebaceous hyperplasia [1]. They demonstrated that the PDL is a safe and effective treatment option to eliminate sebaceous hyperplasia, but accompanied by the risk of PDL-induced purpura [1]. This PDL-induced purpura is secondary to the high-fluence requirement needed to effectively eliminate the targeted sebaceous gland. We have employed a novel technique for the elimination of this PDL-induced purpura within 72 hours using our moderate-fluence PDL protocol. To date, there are no reports in the literature describing the use of pulsed-dye laser to rapidly eliminate the purpura that is directly caused by high-fluence pulsed-dye laser therapy.

A cohort of five patients (5 males; Fitzpatrick skin types II-III; 44-66 years) with multiple facial sebaceous hyperplasia (1-4 mm diameter) were treated with high-fluence PDL followed by treatment for the PDL-induced purpura after informed consent had been obtained. All five patients had hyperplastic sebaceous glands located on the face (malar cheeks, forehead, and periocular) (Figure 1). The patient was treated 24-hours later (after the initial PDL treatment for sebaceous hyperplasia) with a single pulse using a 595 nm PDL (VBeam® Perfecta, Candela Laser Corp, Wayland, MA) a 7- mm spot size, a fluence of 9.0 J/cm2, a 6 msec pulse width, and a dynamic cooling device duration of 30/20 (spray/delay). No specific aftercare instructions were recommended after each laser session.

Photographs were taken at baseline, after the first and second PDL treatment, and at final follow-up.

The lesions of all five patients responded immediately to the first treatment of sebaceous hyperplasia with development of significant purpura and erythema (Figure 2). After 24-hours, the PDL-induced purpura was subsequently treated with moderate-fluence PDL. The PDL-induced purpura was immediately reduced by 85% after session 2 with only residual erythema and minimal residual purpura (Figure 3). 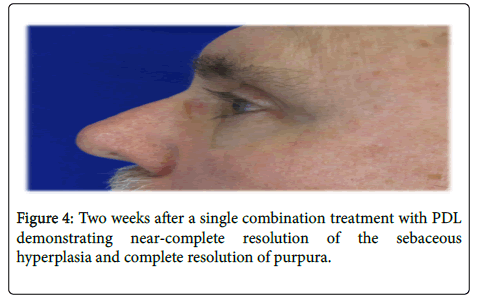 Historical treatment modalities for sebaceous hyperplasia, including cryotherapy, electrocauterization, curettage, surgical excision, and chemical ablation all have significant risk of scarring and dyspigmentation [1-3]. Laser therapy for sebaceous hyperplasia has been described in the literature previously and is an underutilized tool in dermatologist’s armamentarium [1-4].

In our study, we increased the fluence to 20 J/cm2, with the expectation that the significant energy would trigger further coagulation necrosis of the surrounding vasculature with the tradeoff of producing more post-PDL purpura. It was this purpura that prompted the use of an additional session of moderate-fluence PDL. For the treatment of sebaceous hyperplasia, a single high-fluence pulse using short pulse duration (msec) was chosen after considering the risk of nonspecific thermal injury to surrounding tissue beyond the selective photothermolysis of blood vessels. Although PDL is a safe and effective treatment option for sebaceous hyperplasia, the development of purpura is an expected occurrence. Purpura is often the limiting factor for the use of this treatment modality in clinical practice. In today’s modern society, most patients typically prefer non-invasive treatment options with minimal downtime, rendering post-PDL purpura as an unacceptable result. If left untreated, purpura typically resolves within 7-14 days and this is often unacceptable for many patients [6]. It is for this very reason that we developed a novel treatment protocol for the treatment of both sebaceous hyperplasia and post-PDL purpura with a combination of high and moderatefluence PDL, thus minimizing prolonged downtime in cosmetically sensitive patients. The treatment of purpura with vascular lasers is a common practice and has been thoroughly described in the literature over the years [6]. As mentioned above, the observed purpura arises as a result of the high-fluence PDL requirement needed to adequately and effectively heat the surrounding vasculature of the targeted sebaceous gland. We successfully eliminated 85% of the post-PDL purpura with a single moderate-fluence PDL treatment (9 J/cm2, 6 msec, and a 7 mm spot ). The adverse effects were limited to erythema, edema, and purpura, with only one patient developing a small blister. Although the incidence of adverse effects are relatively low in our study, the use of high-fluence PDL followed 24 hours later by moderate-fluence PDL may slightly increase the risk of developing tissue necrosis. Careful consideration must be used and the patient must be fully informed about the risk of tissue necrosis prior to subsequent treatment. Although we did not experience any significant adverse effects with our protocol settings, we cannot reliably predict the treatment response in every patient. All patients in our study were Fitzpatrick skin type II –III. None of these patients experienced any signs of dyspigmentation following treatment, but we strongly recommend against the use of high-fluence PDL in patients with Fitzpatrick skin type IV-VI due to the significant risk of hypopigmentation. Until now, a combination treatment protocol for both sebaceous hyperplasia and resulting post-PDL purpura has never been described. We are confident that this novel treatment protocol with PDL will offer clinicians a safe and effective treatment option with minimal downtime in cosmetically sensitive patients.

Treatment of sebaceous hyperplasia with PDL offers a safe and effective treatment modality in patients with Fitzpatrick skin type I-III, targeting the underlying vasculature associated with the sebaceous gland. The high-fluence and short pulse duration required to reduce the size of sebaceous hyperplasia often leads to the development of purpura. This post-PDL purpura is successfully treated with moderatefluence PDL 24-hours later. The PDL is thought to be effective in the treatment of purpura principally due to the abundance of free red blood cells containing the target chromophore, hemoglobin. Hemoglobin is easily destroyed with moderate-fluence PDL and rapidly cleared from the skin with no evidence of long-term sequelae. In the future, we believe that many other conditions requiring highfluence PDL that leads to purpura may also be treated with a subsequent lower-dose treatment to remove any laser induced purpura within 72 hours.

Copyright: © 2016 Graham PM, et al. This is an open-access article distributed under the terms of the Creative Commons Attribution License, which permits unrestricted use, distribution, and reproduction in any medium, provided the original author and source are credited.