Recent Techniques in A Orthodontic Treatment

Use Heart to beat Cardiovascular diseases

Background: Health in school children requires unique attention since they are the future goals in every country. Their disease prevalence and prevention should be updated for the betterment of the society.

Materials and Methods: A cross-sectional study was carried out in 6198 children in different areas of Mangalore city in age group 5–16 years. The dental caries status was assessed by Decayed, Missing, and Filled Teeth (DMFT)/dmft index using the World Health Organization criteria 1997. Collected data from each subject was statistically analyzed to know the prevalence of dental caries using two sample T test and Chi square test.

Conclusion: The present study revealed that caries is more prevalent among preschool children compared to other school going age groups.

In developing countries like India, a changing trend from traditional diet to more westernized diet has increased the level of sugar consumption that has eventuated a hike in dental caries among school children [1]. According to the Directorate General of Health Services and Ministry of Health & Family Welfare, Government of India, dental caries is becoming a leading concern of public health problem, with a prevalence as high as 60%-80% in children. The neglect of Indian population towards oral health is the prime reason for dental caries epidemic, even though it is investigated as a preventable disease. Poor oral health in children can affect growth and school attendance; can lead to medical complications of untreated disease and result in poor social outcomes [2].

The majority of the Indian population resides in rural areas and only less than 40% of children reside in urban areas. These children cannot avail dental facilities due to inaccessibility, financial constraints and stagnation of public dental health care services and therefore are most vulnerable to dental diseases [3]. Schools are credited to provide the most favorable environment to impart oral health education to children. According to World Health Organization, 12 years of age is considered as the global monitoring age, as most of the oral diseases can be perceived during this time span [4]. In recent scenario, a rapid decline has been manifested in prevalence of dental caries in developed countries. This is due to their constant monitoring and caries preventive programs governed among the school children [5]. At the global level, approximately 80% of children attend primary schools and 60% complete at least four years of education, with wide variations between countries and gender. In developing countries, more than 50% of children aged 7 to 14 years are in the school and less than 20% complete the first grade due to the abuse of child labor [6].

Proper guidance is essential for growing children for the healthy growth, perpetuation and hygiene of their teeth. School children are the future building blocks of the society, from this period onwards an effective molding should be given to each child about the importance of oral hygiene. During this span, the habits which are learnt, last for ages and have a vast influence in one’s life. So, it is in the age group between 5-15 years of age where children are distinctly amenable. Thus, schools have a role to implement an absolute framework to reach children and secure a substantial substructure for healthy life at an early age [7].

• To assess the dental caries experience among 5 to 16-year-old school children studying in various schools of Mangalore city.

• To compare the dental caries experience among children according to gender.

• To compare the dental caries experience among children according to age group.

A pilot study was conducted to determine the sample size, the total number of children within age range currently studying in the Mangalore city was taken and smallest possible sample was determined to be 6150 with 10% error. So, to overpower the error the total sample size was increased a skosh.

• Children with no other dental anomalies

• Children present on the day of examination

• Children with any systemic illness or under antibiotic treatment

The children were divided into 4 age groups.

All the oral examinations were organized at each school premises and all Infection control protocols were adopted. The recordings were carried out in the daylight and the child was made to sit in ordinary chair facing away from a direct sunlight. Type III examination was carried to collect the data i.e using mouth mirror and CPI probe (as illustrated by WHO). Community Periodontal Index (CPI) probes (ball point) are used in most epidemiological surveys since it helps in better visualization by removal of debris from the tooth [8]. The trained calibrated examiners carried out all the oral examinations and the clinical findings were recorded by an assistant. The assistant also had enrolled the children demographic variables such as age, sex and locality. Dental caries experience was assessed using DMFT Index (WHO 1997). The tooth was considered carious (D or decayed component) if there was visible evidence of cavity, including untreated dental caries. The missing (M component) included teeth with indications for extractions or teeth extracted due to caries. The filled (F component) included filled teeth. The total number of caries free children was also documented. Finally, the appropriate treatment for each child was advised by the examiners such as oral prophylaxis, restorations, extraction and others.

Data analysis were carried out by means of Rcommander 2.3-0. Descriptive statistics was done using frequency, mean and standard deviation. The inferential statistics was done using chi square test for comparing frequency of subjects with and without caries between different age groups and one sample t test was used for gender wise comparison of caries experience among school children. The level of significance was set at P<0.05.

One sample t test was used to compare the means; SD: Standard Deviation 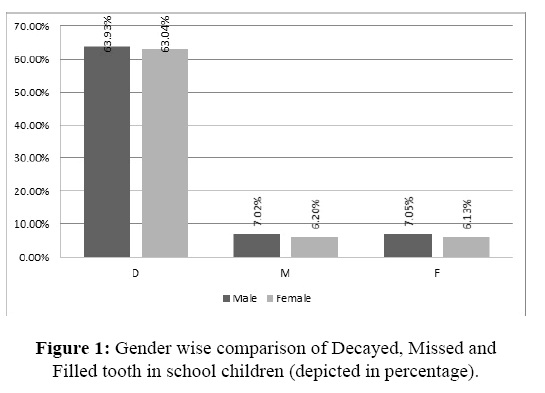 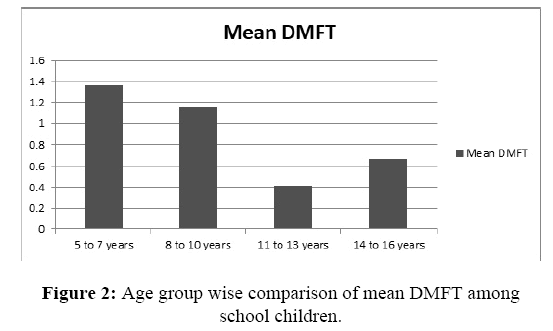 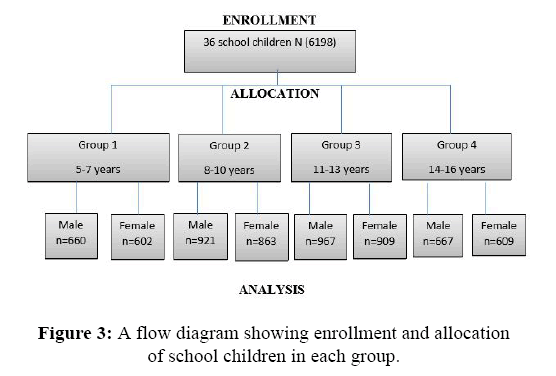 Figure 3: A flow diagram showing enrollment and allocation of school children in each group.

Chi square test was used to compare the frequencies in each age group. p value is significant at 0.05.

As known from centuries ago, dental caries has been rationalized as a multi factorial disease influenced by various aspects of intraoral and extra oral factors including age and sex. The present study was investigated among 5-16 year old and representative sample taken was 6198 children from 36 schools in Mangalore. The prevailing outcome from this investigation were ruled out as follows

• The caries experience (DMFT score) and individual components (D, M, and F) among 5-7 year old children were higher when compared with other groups. The lower content of calcium and morphological variations of deciduous dentition was one of the reasons for increased caries susceptibility among these group of children [9]. Limited attention of the parents of these children towards dental health might be another reason for increased dental caries in these age group.

• The least dental caries was among 14-16 years old age group. It can be due to the less length of exposure of permanent dentition in the oral environment and due to the increased awareness of the children regarding their oral health.

The children who are caries free in the current study is 36.48% and it is similar to the study conducted by Reddy et al. [3] and they reported 35.8% children are the caries free. Highest prevalence of dental fluorosis was seen in 12-24 year age group, it was explained in an investigation negotiated in Gujarat [20] and it can also be another reason for decrease in dental caries in school children of Mangalore because in this locality (north eastern region) fluoride content is higher areas where people using deep well water together with pipe water [21].

To sustain this improvement in the oral health of the children, we recommend further oral health promotion through well-structured oral health education program and preventive school dental health programs. Mobile dental clinic service can be utilized to implement necessary treatment procedures for those children in need. Awareness among students can also be generated by the school teachers as well as by the parents as they are the role models for them.

A considerable volume of population was considered for this study to earn maximum indisputable outcome. But there are some limitations in the present study such as factors that influence to cause dental caries as diet history, oral hygiene habits, socio economics status and frequency of brushing was not perpended in the study. Since it is a cross sectional study there was an inability to establish the relationship between various causal factors and dental caries.

According to the present data, there is an overall improvement in the dental caries experience among the school children of Mangalore city. The children of mixed dentition period showed more prevalent caries experience compared to the other age groups in the present study. Thus, children among this group should be focused more with preventive measures for future to decrease the burden caused by dental caries. The effect of dental fluorosis was quite low in present study (even if this was not recorded in the current study) which is similar to afore mentioned study [21]. Dental caries among school children was a prominent finding than dental fluorosis. Data from this study can be utilized as a tool for planning and implementing preventive as well as treatment programs to the school children of Mangalore city.

The authors would like to thank our colleagues Dr. Ambili Nanukuttan, Dr. Indu Nair and Dr. Dona Elizabeth, all the interns, heads of the schools, teachers and the participants for their valuable help and cooperation.

Copyright: Â© 2018 Aparna M, et al. This is an open-access article distributed under the terms of the Creative Commons Attribution License, which permits unrestricted use, distribution, and reproduction in any medium, provided the original author and source are credited.

Sources of funding : No funding.