In patellectomized patients, the change of extensor mechanism of the knee and the increase of antero-posterior laxity can enhance the risk of femorotibial arthrosis in non-arthrotic knees and worsen the mechanical conditions in preexcisting osteoarthritis. Several treatment options had been studies, with mixed clinical results. There is paucity of literature on unicondylar knee arthroplasty in post-patellectomy patients with isolated antero-medial knee arthritis. Research identified six case series (23 patients). The postoperative functional outcome was good to excellent in all reports except one, which described revision surgery of all three patients. After this review we conclude unicondylar knee arthroplasty may be a good treatment option in patellectomized patient with isolated antero-medial gonarthrosis.

Total patellectomy is a relative old treatment method that was used in case of complex patella fractures, patellar dislocations, infections, patellar tumors, chondromalacia patellae or patellafemoral arthritis. This procedure is nowadays rarely indicated, except for extreme cases in which the patella cannot be saved. One of the complications is an accelerated medial and/or lateral compartment arthrosis due the altered pull angle, which lead to increased tibiofemoral compressive forces [1-14].

Several treatment options for osteoarthritis in patellectomized patients had been studies, with mixed clinical results [15-18]. The number of studies on unicondylar knee arthroplasty in postpatellectomy patients with isolated medial compartment osteoarthritis is limited. Research identified six case series, including 23 cases with a follow up between 12 and 132 months [5-10]. Will unicondylar knee arthroplasty be a viable treatment option in patellectomized patients with antero-medial osteoarthritis?

The patella plays an essential role in the extensor mechanism of the knee. By displacing the quadriceps tendon anteriorly, the patella increases the quadriceps lever arm. This means the perpendicular distance between the center of rotation of the knee and the applied force is increased, reducing the force needed to be produced by the quadriceps muscle to extend the leg [1,3].

Secondarily, the patella contributes an important role in the antero-posterior stability of the knee. The knee is viewed as a four- bar linkage system: patellar tendon, quadriceps tendon, anterior cruciate ligament (ACL) and posterior cruciate ligament (PCL). Due the patella, the patellar tendon is positioned parallel to the PCL and the quadriceps tendon parallel to the ACL during flexion, preventing anterior translation of the femur on the tibia [7,17].

The effect of the total re-movement of the patella on the knee function is not negligible. There is a loss of mechanical advantage of the extensor mechanism. Because of reduced moment arm, the quadriceps has to generate a larger force (15% increase in contraction force) to extend the knee [11] (Figure 1). In 1971, Kaufer described a decrease of 30% in quadriceps efficiency in the terminal 60º of knee extension [1,12]. Sutton et al showed an average loss of strength of 50% [3]. Furthermore, the four-bar linkage system is disrupted, leading to a slightly decrease in antero-posterior stability [2]. Also hypertrophic bone formation in the trochlear groove was described because of the sliding of the fibrotic scar and the quadriceps tendon [5]. 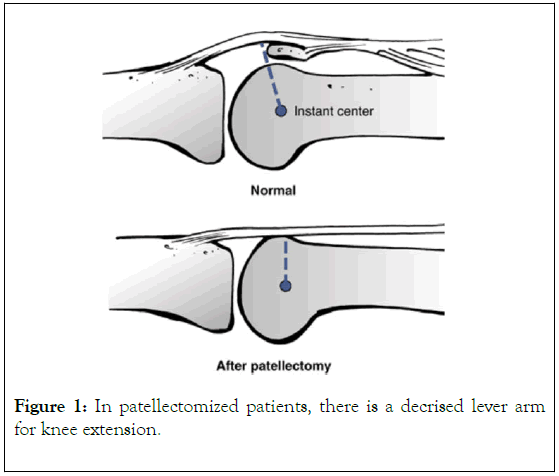 Figure 1. In patellectomized patients, there is a decrised lever arm for knee extension.

The change of extensor mechanism of the knee, with increased force and load on the femorotibial joint, and the increase of antero-posterior laxity can enhance the risk of femorotibial arthrosis in non-arthrotic knees and worsen the mechanical conditions in pre-excisting osteoarthritis in patellectomized patients [13,14].

The consequence is that a subset of the patellectomized patients will eventually requires a total knee arthroplasty (TKA). Several studies with varying types of TKA (CCK, CR, PS) are done in post-patellectomy patients. The postoperative clinical outcome is inferior to those with an intact patella, the arc of flexion is a little bit lower and there is a significant higher complication rate. The most described complications are instability, infection, delayed healing and stiff TKA [15,16].

As described above, the four-bar linkage system is disrupted in patellectomized patients, leading to an increased anteroposterior laxity. Unfortunately, no superiority was showed with posterior-stability (PS) or cruciate-retaining (CR) implants [17,18]. Previous surgery will be the reason of stiffness in postpatellectomy patients. Delayed healing and infection may seem to be related to the instability, but possible even more to the poor soft tissue coverage [15,16].

Will a unicondylar knee arthroplasty (UKA) be a viable treatment option if the patellectomized patient has an unicompartmental (isolated antero-medial) osteoarthritis? Will the little increase in antero-posterior instability be a contraindication for the placement of an UKA? The answer is no. With a functionally intact ACL, the absence of a patella will not be contraindicated. Preservation of the cruciate ligaments will retain an important portion of the four-bar linkage system. Furthermore the intact ACL might result in faster recovery and better postoperative function [5].

We performed a systematic search of electronic databases (PubMed, Medline (OVID), Trip database and Embase) and identified only six case series, including 23 cases with a follow up between 12 and 132 months (Table 1) [5-10].

Table 1: Cases described in the literature.

The first series of 15 cases for the use of the Guepar Lotus Knee prosthesis was published in 1976 by Insall et al. [10]. In 1987, Marmor described good to excellent postoperative results in two patellectomized patients who underwent a Marmor UKA (Smith and Nephew) [9]. On the other hand, Capra and Fehring reported in 1992 revision of all three Marmor prosthesis [8]. Pang et al. demonstrated good clinical results (no anterior knee pain or instability) and restored quadriceps strength after 5 years of follow-up.

In his case report, the ZUK (Zimmer) minimal invasive fixedbearing UKA was used [7]. In 2018, Kouk et al. showed that a significant pain relief and an improved knee function (IKDC of 65,69) can be achieved with the MAKOplasty robot-assisted UKA (Stryker) in a patient with severe antero-medial gonarthrosis following total patellectomy [6]. Last year, Brauns and Feyen published a case report for the placement of the Oxford UKA (Zimmer-Biomet) (Figure 2). At one year postoperative, the patient filled out an OKS of 47 (satisfactory joint function) [5]. Total patellectomy is in the modern orthopaedic surgery rarely indicated. The change of extensor mechanism of the knee and the slight increase in antero-posterior laxity can enlarge the risk of osteoarthritis in the patellectomized knee. Several treatment options, e.g. varying types of TKA, had been studies, with mixed clinical results. Instability is the most described postoperative complication in post-patellectomy patients who underwent total knee prosthesis.

In patellectomized patient with isolated antero-medial gonarthrosis and intact cruciate ligaments, a unicondylar knee arthroplasty may be a feasible treatment option. With retention of the ACL, the four-bar linkage system is better preserved. The placement of UKA also allows less soft tissue disruption, shorter hospital stay and faster rehabilitation when compared to TKA. Further well-designed studies with long follow-up durations are needed to confirm our conclusions.

Copyright: © 2020 Brauns J. This is an open-access article distributed under the terms of the Creative Commons Attribution License, which permits unrestricted use, distribution, and reproduction in any medium, provided the original author and source are credited.