Towards an HIV Vaccine Based on Immune Network Theory II

We have designed immunization protocols based on the co-section model to induce a broadening antigen antibody response against HIV1. As antigen were various antigen-antibody complexes used, including the monoclonal antibody 1F7 that is expressed on anti-HIV1 antibodies with different antigen specificities.

Rabbits were used to test this concept using. Antibodies that neutralized HIV-1 of the same strain as that of the gp120 used were detected, but they did not include broadly neutralizing antibodies (BnAbs). Immunization with gp120 in adjuvant induced antibodies binding to gp120, gp41, Nef and p24, a finding predicted by the immune network theory. Furthermore a complex of 1F7 and B12 induced antibodies against gp120 and gp41, demonstrating an antigen broadening response towards achieving the goal of inducing BnAbs through immunization.

In 1974 Jerne proposed that the immune system is organized as a network of interacting antibodies within a corresponding network of antibody-producing lymphocytes [1]. Subsequently Kohler demonstrated that the network-interaction of Ab and anti-Ab (idiotype and anti-idiotype) were symmetrical [2,3]. Richter expanded the model by suggesting that the network continues as a chain-reaction Ab1-Ab2-Ab3…..[4]. Hoffmann proposed that within the cloud of Ab’s related to an immune response mutually specific clones are stimulated, a process called co-selection [5]. This phenomenon was first observed by Oudin and Casenave showing sharing of idiotopes by antibodies with different specificity [6]. The monoclonal IgM 1F7 antibody recognizes an “idiotope” shared by anti-HIV1 and anti-HCV antibodies [7-9]. Thus, the 1F7 is a disease related Ab2 and has been designated as Ab2 delta [10]. This study was undertaken to 1) see if rabbits can be used to investigate the co-selection process and 2) if 1F7 can direct the response to HIV1 towards a broadly neutralizing antibodies response.

ELISAs were performed at the University of Kentucky Dept. of Microbiology lab, Lexington, KY, USA, and by ImmunoPrecise Antibodies Ltd., Victoria, BC, Canada.

Antibodies binding to HIV-1 antigens was tested by ELISA. ELISA was performed as previously described [13].

Plates were coated with HIV-1 rgp120-IIIB (gp120) or HIV-1 gp41 MN and blocked with % BSA. Rabbit serum starting at 1:5,000 and 1:10,000 were filled in microtiter plate wells, serially diluted, and incubated at room T overnight. The plates were then washed with PBS containing 0.05% Tween (gp120 coated) or 0.10% Tween (gp41 coated). Secondary goat anti-rabbit IgGHRP was added, and binding visualized by adding OPD substrate. Absorption was read I spectrophotometer at 490 nm.

To prove specific dual antigenicity in conjugates gp41-MPERpeptide- 1F7 were tested for binding to a) 1F7 goat-anti mouse IgM, and b) goat anti-gp41IgG-HRP.

Sera from bleedings of Day 42 of all the rabbits were tested for the presence of HIV –1 neutralizing antibodies by Celia Labranche of David Montefiori’s group at Duke University [14]. 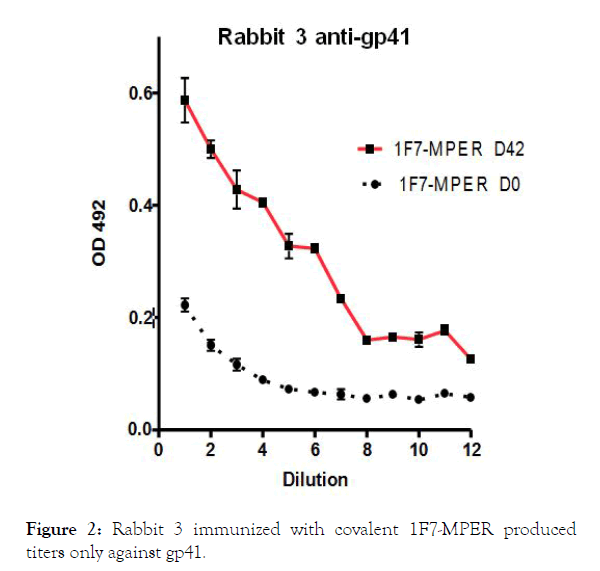 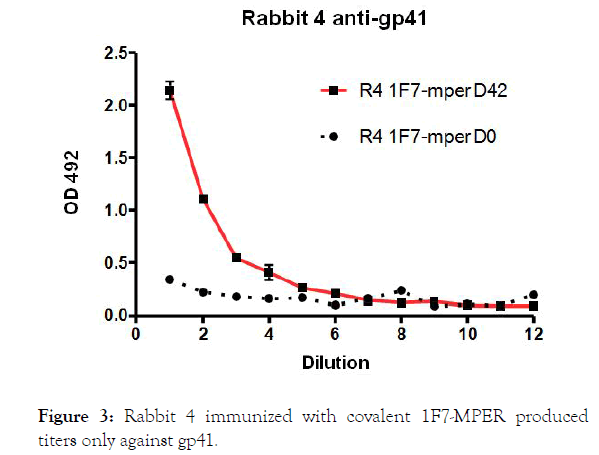 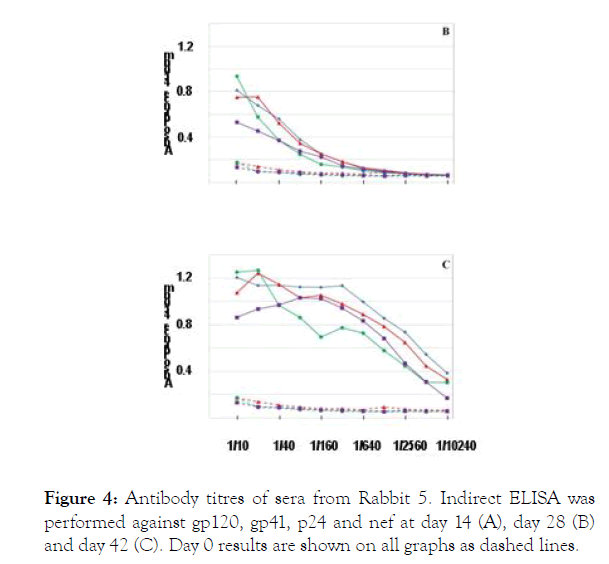 Figure 6. Rabbits 7 and 8 were immunized with 1F7 sham treated showed titers only against gp120. Figure 8. This figure is adapted from Figure 5 of Hoffmann, Muller, Kohler [5]. Here Ƙ1F7 is Ab2 and an HIV antigen is Ag. Ab1 (not shown) is the HIV-specific IgG in the serum of HIV positive persons used in the generation of Ab2. 1F7 is an antiidiotypic antibody Ab2. 1F7 stimulates Ab3 and the HIV antigen stimulates Ab1’. There is coselection of (a) Ab3 clones and (b) Ab1’ clones with (c) Ab4/Ab2’ clones, leading to the Ab4/Ab2’ clones becoming the strongest antigen in the system with-selection of anti-HIV1 epitopes.

Collectively, these data indicate that rabbits like other species produced antibodies against HIV1 antigens. However the response in rabbit 5, immunized with gp120 in CAF and CFA, was surprising since antibodies against different HIV1 antigens that were not used to immunized were recorded. Similar, rabbit 6 immunized with mix of tow monoclonal antibodies, 1F7 made in mice, designate as AB2delta [10] and the other B12 obtained from HIV1 infected individual, produced a response against the panel of HIV1 proteins.

These findings, while preliminary, indicate the existence of a B cell network in the HIV1 infection that is guided along the axis of the 1F7 [15].

The day 42 sera of all the rabbits were tested for the presence of neutralizing antibodies. The only rabbits to produce neutralizing antibodies were R1 and R2, as shown in Table 1. The sera were also tested for neutralization of four other pseudoviruses produced in 293T/17 cells, namely SHIV 1157ipEL p, SHIV-1157ipd3N4, SHIV-SF162P3 and SHIV-SF162P4, with uniformly negative results. Only rabbit 1and 2 immunized with covalent 1F-gp120 showed an ID50 neutralization titer against the corresponding gp120 virus.

Table 1: The ID50 values are the serum dilution at which relative luminescence values were reduced by 50% compared to virus control wells (no test sample).

The aim of this study was to demonstrate an immunological network based on the concept of symmetry [16]. Such networks exist in the response to HIV1, as described earlier [5], and we aimed to find whether rabbits can be used to probe networks of interaction B-cells, is based on the principle of symmetry [2,17]. A HIV1 specific network was predicted by the discovery of the 1F7 monoclonal antibody that binds with different HV1 proteins [8]. The sharing of idiotopes by different antibodies has been observed in several responses [6] as idiotpes are physically separated in the Ig structure, designated as network antigens [10]. The response in rabbits 5 and 6, indicated an epitope spreading. However, neutralization was not achieved, possibly by not sufficient titers or failure of targeting neutralization antigens. It is remarkable that the 1F7 in the complex with gp120 induced neutralization, while the response in rabbits to gp120 alone with adjuvant did not. This seems to support the notion of a physiological important network in HIV1 infection [18].

The ultimate goal in eradicating HIV1 infection is the development of universal vaccine that induces neutralizing immune responses against a spectrum of different clades and viral mutants. The immunization regimen used in this study may not be optimized to induce neutralizing antibodies. Future studies shall use a prime/boost regimen whereby the priming dose will include 1F7.

We thank Celia LaBranche in David Montefiori’s lab at Duke University for carrying out the neutralization assays. We thank Michael Russ for performing photo-affinity and chemical conjugations at the Dept. of Microbiology at the University of Kentucky.

ELISA of rabbit sera against gp120 and gp41 were described in material and methods (Elisa 1).

Copyright: Â© 2019 Hoffmann GW, et al. This is an open-access article distributed under the terms of the Creative Commons Attribution License, which permits unrestricted use, distribution, and reproduction in any medium, provided the original author and source are credited.