The use of GNPs for detecting and treating the cancer is a new and exciting field of research. The current methods of cancer diagnosis and treatment are costly and can be harmful to the body. GNPs, however, offer an inexpensive route to targeting the cancerous cells [1].

GNPs are particularly promising since they are relatively easy to be produced in various shapes and can be conjugated with peptides/ proteins for targeting to specific molecules [2]. In addition, GNPs undergo plasmon resonance when excited by light [3], whereby the gold electrons resonate in response to the incoming radiation, causing them to both absorbs and scatters light.

The small size of GNPs implies that they could get close to a biological target of interest. Metallic GNPs can resonate in response to a time-varying magnetic field, which has certain advantages related to the particle energy transfer [3-7].

The particle size-dependent distribution of GNPs by organ has been studied in vivo [8-11]. Orally administrated GNPs appeared in various organs in mice and the absorbance and distribution was inversely correlated with particle size [8]. The small size of GNPs results in physical and chemical properties that are very different from those of the same material in the bulk form. These properties include a large surface to volume ratio, enhanced or hindered particle aggregation depending on the type of surface modification, enhanced photoemission, high electrical and heat conductivity, and improved surface catalytic activity [12-16].

The GNPs levels in several rat organs are not documented and have not yet been identified. In the present study, an attempt has been made to characterize the GNPs levels in the liver, kidney, heart and lung organs following experimental GNPs and, if so, whether are related to the size of these NPs and the time of exposure.

The present study was carried out to investigate the particle-size and exposure duration of GNPs on several rat organs in an attempt to cover and understand the toxicity and their potential therapeutic and diagnostic use. There is little in vivo data available regarding the levels of GNPs as a diagnostic tool for bioaccumulation of GNPs in rat organs. To explore the potential role of GNPs in therapeutic and diagnostic applications, we evaluated the levels of different GNPs sizes for periods of 3 and 7 days following intraperitoneal administration in rat.

The rats were anesthetized by inhalation of 5% isoflurane until they exhibited relaxed muscular tonus. Liver, heart, kidney and lung organs were collected from each rat. All experiments were conducted in accordance with the guidelines approved by the King Saud University Local Animal Care and Use Committee.

Various rat organ samples were wet digested with nitric acid and converted into acidic digest solutions for analysis by AAS and ICP-MS methods. The organ was freeze dried in order to minimize loss of analytes and to facilitate subsequent sample preparation steps, and then homogenized to a fine powder by ball-milling in plastic containers. Organ samples were dried completely in a clean oven at 60–70°C. Each dried organ was digested to white ash using 30% hydrogen peroxide (Powell, OH) at 50–60°C followed by digestion with concentrated ultra-pure trace-metal free nitric acid (0.1 ml, GFS Chemicals). Approximately 0.20 to 0.25 g of powdered organ was weighed into a Teflon reaction vessel and 3 ml of HNO3 were added. The closed reaction vessel was heated in a 130°C oven until the digestion was completed. The samples were then diluted to a final volume of 20 ml with quartz distilled water and stored in 1 oz. polyethylene bottles for later analysis by the instrumental techniques.

AAS determines the presence and concentration of gold (μg/L) in the different organs of rats. The gold absorbed ultraviolet (UV) light when it was excited by heat. The AAS instrument looks for the gold by focusing a beam of UV light at a specific wavelength through a flame and into a detector. The sample of interest was aspirated into the flame. If the gold is present in the sample, it will absorb some of the light, thus reducing its intensity. The instrument measures the change in intensity. A computer data system converted the change in intensity into an absorbance. As the concentration goes up, the absorbance also goes up. A calibration curve was constructed by running standards of various concentrations (10, 15 and 20 PPM) on the AAS and the corresponding absorbance was observed. The samples were tested and measured against this curve. AAS measurements were carried out at the Research Center of King Saud University. The gold levels were measured using a Specter AA-220 series double-beam digital atomic absorption spectrophotometer. The concentration of gold in each organ sample was calculated by comparing the absorbance produced by the sample with that produced by a series of standards [17].

A PlasmaQuad-3 ICP-MS instrument (V.G Elemental, Cheshire, UK) was used to quantify gold in the digested organ samples. This instrument uses an 8000°C temperature radio frequency-generated argon plasma to atomize and ionize gold ions to singly charged mass ions and the mass-to-charge (m/z) ratio signals were used to quantify the elements. Bismuth (209Bi) 1 ng/mL, was added to all samples as an internal standard in order to correct errors due to instrument drifts during data acquisitions. The digested samples were diluted suitably using 1% nitric acid, aspirated and then nebulized using a quartz Meinhard micro-concentric type nebulizer into the argon plasma via a peristaltic pump with a flow rate of approximately 0.9–1.0 mL/min. Mass spectral acquisitions were carried out using pulse-counting scanning mode with the following instrumental parameters: mass range scanned 190–220 m/z with 19 channels per mass, three points per peak, and 10.24 ms dwell time on each isotopic mass. The instrument control, methods procedures, and the data system, including calculations and statistics were operated via a personal computer with Plasma Vision Software. Nitric acid (1%) blanks were run in between samples to correct the background levels [18].

Size and morphology of GNPs 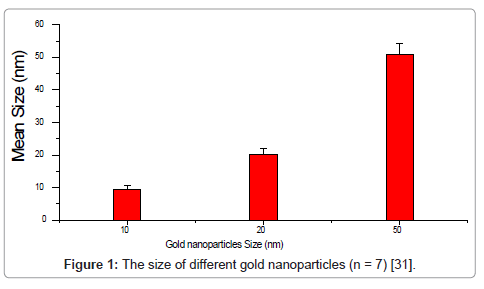 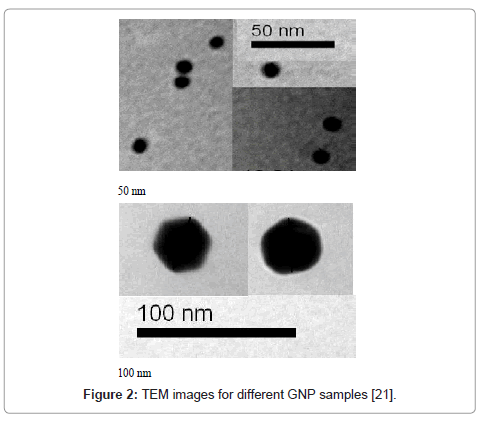 To determine accurate distribution of GNPs in rat several organs, we employed two different techniques to measure the gold levels in various organs, including liver, kidney, heart, and lungs. With both ICP-MS and AAS, the amounts of gold detected in each organ were different. After the intraperitoneal administration of 10 and 50 nm GNPs at the dose of 50 μl for 3 and 7 days, we found significant increase of gold levels in the several organs examined (Figures 1-4), suggesting that the administrated GNPs were absorbed into systemic circulation and distributed into organs.

GNPs-normal rat demonstrating normal GNPs levels as shown in Figures 1-4. In comparison with the control group, the alterations of GNPs levels were detected in the liver (Figure 1), heart (Figure 2), lung (Figure 3) and kidney (Figure 4) of GNPs treated rats. The GNPs levels significantly increased in all the examined organs with G1A, G1B, G2A and G2B compared with the control. 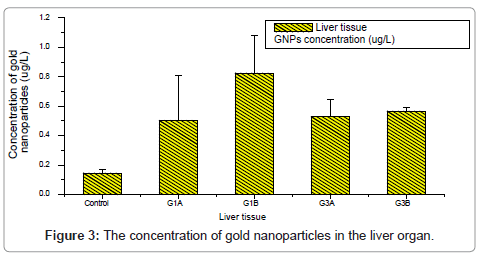 Figure 3: The concentration of gold nanoparticles in the liver organ. 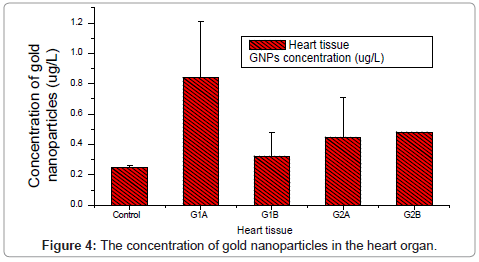 Figure 4: The concentration of gold nanoparticles in the heart organ. 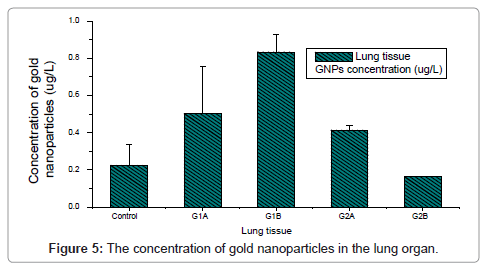 Figure 5: The concentration of gold nanoparticles in the lung organ. 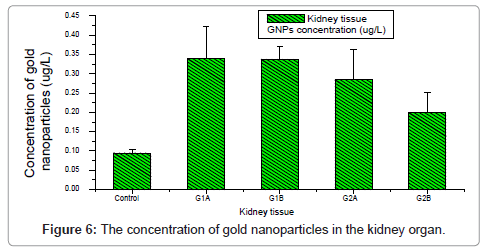 Figure 6: The concentration of gold nanoparticles in the kidney organ.

It became evident from these results that the alterations in GNPs levels were size-dependent with smaller ones induced the most toxicity effects and related with time exposure of GNPs as shown in Figures 1 and 3 (liver and lung organs).

The increase in GNPs levels might be an indication of injured hepatocytes due to GNPs toxicity that became unable to deal with the accumulated residues resulting from metabolic and structural disturbances caused by these NPs [22-25]. It has been reported that the gold levels in blood were not indicate significant difference after 8 days of administration of GNPs; while the bioaccumulation of GNPs in the brain was significantly increased in a dose-dependent manner with higher levels than the reported physiological levels in brain [26].

No significant differences were observed for any of the organs studied as compared with controls untreated animals. These observations indicate that extensive inflammation might not be induced in the mice after administration of gold nanoparticles, which is confirmed by the macroscopic morphological examination described later.

Cho et al. [27] have demonstrated that the organ gold concentration is time dependent after injection, and after intravenous injection of 13 nm GNPs, the gold was found in various organs just 3 day after injection. However, the blood gold levels not increased in proportional to the dose, indicating that GNPs are taken up and accumulate in organs.

In this study, the lowest percentage normalized increase of the smaller GNPs in the kidney organs compared with the liver and lung organs could be explained by the bigger size of the GNP s with respect to the glomerular pores that nearly measure 6 nm. So it is unlikely that NPs can pass through the glomerular filtration due to its size and negative electrostatic potential. The lowest percentage normalized increase of the larger GNPs compared with the smaller GNPs might be attributed to the highly excretion of GNPs via the hepatobiliary system into the feces. The bioaccumulation and toxicity induced by the GNPs are particle size, exposure duration and surface characteristics dependent.

The bioaccumulation of GNPs in the spleen and liver organs may be regulated by the reticulo-endothelial system involved in the uptake and metabolism of exogenous molecules and particles in these organs, and the NPs are taken up by kupffer cells in the liver and by macrophages in other place regardless of the particle size [28].

Hepatocytes exhibited cloudy swelling accompanied by leakage of lysosomal hydrolytic enzymes, which resulted in cytoplasmic degeneration and macromolecular crowding, and ballooning degeneration. These changes were more prominent with 10 nm size particles than with larger ones. This may be the result of disturbances in membrane function, leading to water and Na+ influx [23,24,27].

Mice exposed to GNPs showed no organ damage in any of the sections obtained from the kidney, liver, spleen, brain or lungs. Accumulation of GNPs in different organs did not induce toxicity as assessed by animal behavior, organ morphology, and histopathological examination [26].

The bioaccumulation of GNPs in the liver organ may be regulated by the reticuloendothelial system, which is part of the immune system involved in the uptake and metabolism of exogenous molecules and particles. In addition, GNPs are taken up by kupffer cells in the liver and by macrophages in other organs, regardless of the particle size [24,25,28].

It became evident from the results of this study that the alterations in GNPs levels were size-dependent with the smaller ones induced the most toxicity effects and related with the time exposure of GNPs (liver and lung organs). Our results might indicate that GNPs are mostly taken up and accumulate in organs, suggesting the toxic effects induced by the smaller GNPs.

These conclusions are further supported by histological investigation suggesting that the highest toxic effects were induced by the smaller GNPs and related to the time exposure of GNPs.

MAKA analyzed and data and wrote the final draft of the manuscript. The animal model used in this study was obtained from the Laboratory Animal Center (College of Pharmacy, King Saud University). MAKA conceived the study and design, and obtained the research grants that supported the study. The author has read and approved the final manuscript.

The author is very grateful to NPST. The National Science and Technology Innovation Plan (NSTIP) provided funding for this project through Research No. 08-ADV206-02 and Research No. 09-NAN670-02, College of Science, King Saud University, Saudi Arabia.

Copyright: © 2012 Abdel Halim MAK. This is an open-access article distributed under the terms of the Creative Commons Attribution License, which permits unrestricted use, distribution, and reproduction in any medium, provided the original author and source are credited.
Top