The Influence of Mobile Phone Addiction on Procrastination: A Moderated Mediating Model

The Influence of Mobile Phone Addiction on Procrastination: A Moderated Mediating Model

As technologies advances, mobile phones, especially smartphones become increasingly dispensable for young adults, it is particularly prevalent among universities students. But the tools negatively affect the users’ physical and mental health who spend more time on it, such as interpersonal communication problems poor sleep quality, and academic failure. The recent papers pointed out that a prominent association among mobile phone addiction, future time perspective, procrastination each other, but few authors investigated the underlying mechanism of above three variables. The study aimed to estimate the mediating role of future time perspective whether the mediator explored the relation of mobile phone addiction on delaying. At the same time, this paper tried to test the moderate effect of gender according to previous study.600 students from medical college in Weifang located in Shandong Province completed multiple scales, namely Mobile Phone Addiction Tendency Scale (MPATS). Future, Time Perspective Scale (FTPS), Arouse Procrastination Scale and Avoidant Procrastination Scale, respectively. The results follows were: (1) future time perspective partially mediated the relationship between mobile phone addiction and procrastination. The proportions of explanation for indirect effects were 20.32% and 24.70%, respectively. (2) Gender played a moderated role in the influence of independent variable on dependent variables. The regulated mediator model was fit and receivable, the mediated model is more suited to male, the addictive behavior profoundly related with procrastination in male groups than that of in female groups. Future directions for the investigation of the moderated mediation model in medical college students in Weifang and the limitations of the present study were discussed.

Mobile phone use is a chronic and complex trouble in modern society, according to a report from CNNIC, by the end of December 2017, there are 772 million cyber citizens in China, of which phone users up to 753 million, phone users account for 97.5%, increasing 2.4% than that in 2016, most highest proportion is students sample [1]. This reveals that people, especially the student groups, increasingly dependent on mobile phones, and also gradually change their communication behaviors, which overuse is detrimental to their social and psychological function, extraordinary cognitive bias and academic failure resulting from procrastination. There were papers suggested that young groups were easier to immerse them in excessive usage of phone to a large degree than older groups [2]. It is urgent to enforce strategies to reduce even eliminate the phenomenon so as to promote academic achievement by alleviating phone addiction and improve future time perspective.

The influence of mobile phone addiction on procrastination

Mobile phone addiction is a prevalent disorders among college students, despite divers-e conceptualizations, the paper interpreted mobile phone addiction as dependence that person overuse their phone out of control, Which contributed to intensive sense of attachment to phone that damage the physical, psychological and social function [3-6]. Procrastination was regarded as the habit of automation by Tuckman, who pointed out that was the tendency o-f which someone postpone or escape to undertake the due obligations, make decisions or e-xecute the tasks [7]. Some previous researches indicated that inappropriate usage for mobile phone can positively predict academic procrastination [8,9]. Another studies revealed that procrastination phenomenon was ubiquitous among universities students [10,11]. Furthermore, some studies also demonstrated that overuse of phone lead to mental health problems, for instance, depression stress anxiety and poor sleep quality can come into being along with the emergence of addiction behaviors [12,13], and authors also displayed the relationship of impulsive behaviors with social interaction, such as isolation academic failure and emotion issues [14]. All above factors enhanced students’ negative experience so as to cause stronger degree of procrastination. To conclude, on the basis of prior investigations, we attempted to confirm the first hypothesis: the influence of mobile phone addiction on procrastination among medical students.

The mediator of future time perspective

The moderate effect of gender

Though, prior papers manifested that mobile phone addiction affected procrastination, may be, and were not all students affected equally. In other words, there may be other hidden variables in the underlying mediated model, which exert a moderated effect. When the moderator was added into the mediated analysis, Whether the direct effect between mobile phone addiction and procrastination and indirect effect of mediator-future time perspective would be moderated by gender or not. It is the third hypothesis to be affirm.

Multiple anonymous, self-reported questionnaires were handed out the samples of 600 Chinese college students in Medical College in Weifang by cluster random sampling, reclaiming 590 samples and kicking out 18 invalid questionnaires, in total 572 samples, of which, 303 females and 269 males (freshmen:178; sophomore:118; junior:171; senior and above:105; urban:279; rural:293), who were very willing to join in the investigation and gave their true reaction to the contents taking on the three questionnaires within approximately 15 minutes, respectively. After study, every participator got a pen as the gift of our thanks.

Mobile Phone Addiction Tendency Scale (MPATS): We put to use a Chinese version of MPATS developed by Xiong J et al. Which learning from original version and its items [25,26]. The MPATS contained 16 items and students responded to each item from 1 (not at all suit to me) to 5 (mostly accord with me). The higher scores on the scale, the more powerful tendency on addiction behaviors. The scale had good internal consistency coefficient (α=0.83) and test-retest of that was 0.91, Cronbach’ α for the 4 subscales were 0.55-0.88 and their test-retest coefficient were 0.75-0.85. In this study, the Cronbach’ α was 0.876, the subscales of that were from 0.600 to 0.786. The reliability is trustworthy.

Future Time Perspective Scale (FTPS): The scale was designed by Chinese researcher, the Song QZ et al. [27], including 20 items and 5 factors: behavioral commitment, future efficacy, far goal orientation, future intention, and consciousness of purpose. The scale adapt Likert’s 4-piont scale score, from 1 (not at all conform to me) to 4 (very like me), Song proved it fitted Chinese university students very well. The reliability and validity were accepted in Chinese culture background. This research, the total Cronbach’ α was 0.869, of which, 4 subscales were 0.741,0.742,0.734,0.684, respectively, however, just the dimension of future image was 0.487, below 0.5.

Arousal Procrastination Scale (APS): The study employed Chinese revised version by Bao CJ et al. [28] from Lay’s original general procrastination questionnaire [29], which the Cronbach’s α was 0.82, nevertheless, the amended version was 0.803, the split half reliability coefficient was 0.797. In our study, the Cronbach’s α was 0.834. The scale embodied 20 items assessed by Likert’s 5-point scale score, from 1 (not at all like me) to 5 (mostly like me), of which, nine items were passive subjects, needing to convert calculate pattern. The scale was a proper tool to estimate college students’ procrastination in China. The scale was useful to examine college students’ procrastination.

Avoidant Procrastination Scale (APS): We used Chinese version by revised in 2007 [28], the original edition was devised by McCown et al. [30], which contained 15 items, six items were negative, needing to translate acquired scores into adverse scores. The scale was evaluated from 1 (not at all being accordant to me) to 5 (very proper to me). In Bao CJ et al. study, reliability and validity were all accepted (split half reliability coefficient was 0.795, Cronbach’s α=0.779). This research, reliability and validity were good, can be used to investigated Chinese students (Cronbach’s α=0.799; split half reliability coefficient was 0.810).

All data processing used SPSS version 24.0 and Amos24.0 version program to realize our goal. To avoid multicollinearity, we carried out data centralization processing. First, we estimated the association of variables each other with Pearson correlation coefficient by SPSS24.0 and performed descriptive analysis, then, Sobel-test was used in testing mediation effects, given the drawbacks [31,32] at same time, we also used the structural equation model to evaluate the moderating mediated effects by amos 24.0. Finally, mediation effects were certified by bootstrapping method with 2000 samples, and computer calculated the percentile confidence intervals and bias-corrected confidence intervals, but, this research, we applied the percentile confidence intervals as confirmed standard (CI).

Table 1: Descriptive statistics and bivariate correlations among all variables. 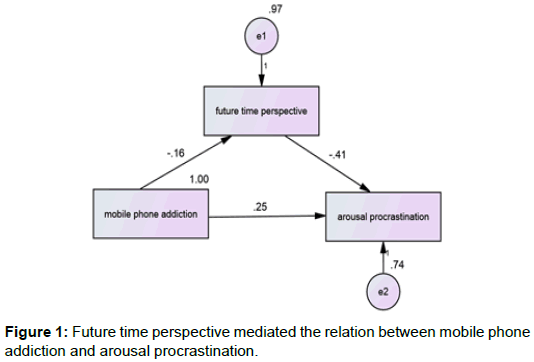 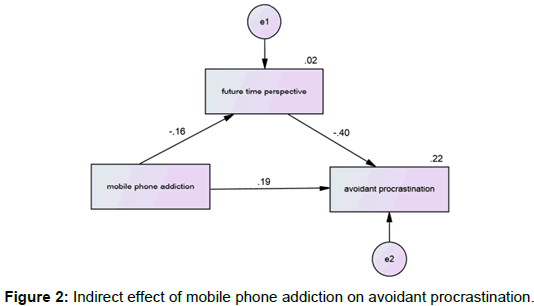 The moderating model of gender 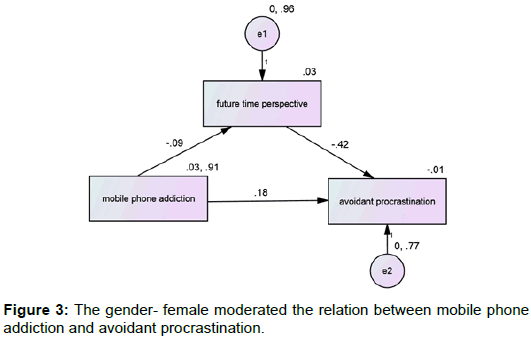 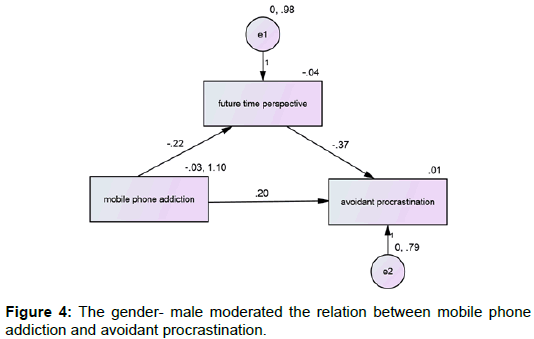 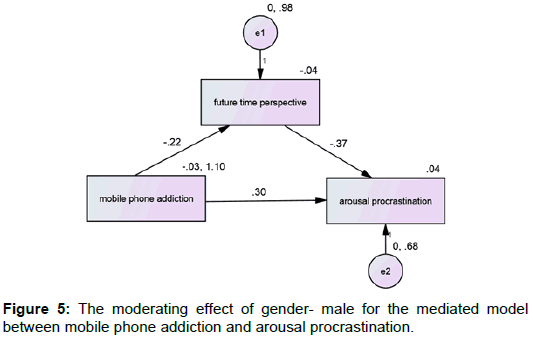 Figure 5: The moderating effect of gender- male for the mediated model between mobile phone addiction and arousal procrastination. 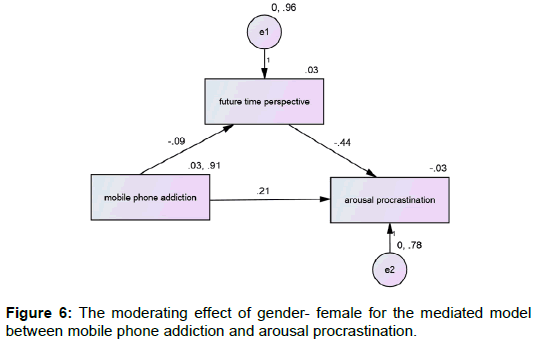 Figure 6: The moderating effect of gender- female for the mediated model between mobile phone addiction and arousal procrastination.

Given the unknown mechanism between mobile phone addiction and procrastination, we estimated the mediating impact of future time perspective, the study provided proof for hypothesis 2. The result manifested the mediating effects were significant and explained 20.32% and 24.70% of total effect, respectively, supporting hypothesis 2. The underlying mechanism was clear, we considered that future time perspective heighten students’ time perceived ability, stimulated their time cognitive system working well, which strengthened their sense of crisis, so they put phone aside or reduced spending time on phone and concentrated on other meaningful, valuable things, or using mobile phone to do something’s that benefiting physical and mental health, as time went by, they could manage self-behavior so that the procrastination decreased and eliminated gradually. All in all, the mediator made the link reduced between mobile phone addiction and procrastination. So it was urgent for university to develop time manage classes in order to guide students perform well in life and study, at same time, students were also conscious of the bad phenomenon of phone addiction resulting in procrastination, they spurred themselves to cultivate temporal awareness and form a good habit, paying more attention to academic performance, keeping away from phone addiction and procrastination.

To evaluate whether the mediating model exerted effects in equal measure among different groups or not, the article tested the moderating effects of gender. The result explained that mediated model played a bigger role in male groups rather than female groups, the higher phone addiction, the higher procrastination for male. We considered that girl-students worked harder than boy-students in medical college so as to make themselves becoming more competitive for seeking a good job in the future, because it was more difficult for female to be hired in Chinese employment environment if given the prospective marriage and family life, the female spend less time on phone than male, which supported hypothesis 3. Up to now, our three goals had realized and provided evidences for previous research gap. From what mention above, we should practice different contents for different gender groups to improve college students’ future time awareness and psychological resources so that reduced their addiction and procrastination behaviors.

Firstly, the dimension about future image of future time perspective had low-level reliability, which α=0.487, below 0.5, so that may affect results, and there were phenomenon of social expectations by self-reported scales, under the conditions, the participants may cater to researcher reflecting perfectly to the contents embraced in the questionnaires in order to build a good self-image. Secondly, sampling bias may lead to potential errors for results. Furthermore, a large samples and stratified random sampling should be put in practice so that increase the quality of investigation in the future. Finally, we just explored the one underlying mechanism of future time perspective to mediate the relation between phone addiction and procrastination, in the future; a experimental study should be carried out to affirm the mediating relationship and more another mediated variables need to test between independent variable and dependent variables.

We thanked all students in Medical College in Weifang, China for participating our investigation.

Li-Qin Liu designed and managed the study and wrote the manuscript. Gao- Min and Shu-Ting Yue collected and analysis data, Le-Sen Cheng modified the manuscript and collected data. All authors contributed to and approved the final manuscript.

This research did not receive any specific grant from funding agencies in the public, commercial, or not-for-profit sectors.

Copyright: © 2018 Liu LQ, et al. This is an open-access article distributed under the terms of the Creative Commons Attribution License, which permits unrestricted use, distribution, and reproduction in any medium, provided the original author and source are credited.
Top