There is a significant effect of the hydro confining pressure of the core holder on the flowing properties of the formation rocks. This effect is caused due to the mechanical elastic deformation of the core when carrying out laboratory studies of the waterproof and polymer compositions. Consequently, this deformation will cause changing in the permeability and voids storage capacity of the studied core samples. Therefore, under the laboratory conditions and when dealing with such studies on formation cores, it is necessary to consider the changes of permeability and voids storage capacity of these cores.

The main mechanical properties of formation rocks are the compressibility, elasticity and plasticity [1,2]. Formation core samples can be used in many different formation evaluations and in different measurement processes of the petro-physical parameters of these formations. These evaluations and measurements include the designing of oil field development, estimation of oil reserves, determining in the laboratory the coefficients of oil displacement, the study of water shutoff compositions and viscous polymer compositions, etc. The core samples are usually set forth in the collar of core holder, subjected to excessive external pressure that causes deformation in the core samples and change in the permeability and storage capacity of the voids.

The aim of the work was to study the compressibility of rock samples of various lithology and genesis as a result of their exposure to coreholder confining pressure and evaluating the changes in permeability and capacity of voids under the flow of reservoir water through the cores. The research carried out based on specific settings to study of the flow properties of cores samples. These settings include a constant volumetric flow rate (q=0.2 cm3/min) of formation water (density ρ=1.12 g/cm3 and dynamic viscosity μ=0,83 cp at temperature of 60ºC) through water-saturated core model with stepwise increasing of the confining pressure in the core holder. The confining pressure increased from 9.32 to 60.95 MPa, with an interval of 10.74 MPa.

At each stage of the study, stabilization in the pressure (differential pressure) of formation water flow has been achieved. Herewith, the volume of water passing through the core was between one to three volumes of the voids capacity of the core (composite model). When achieving the maximum (in the experiment) hydro confining pressure (60.95 MPa) and pumping the predetermined volume of fluid, the reverse process began. The reverse process represented pressure reduction at the same intervals. The study temperature was 60°C. According to Darcy law, when a fluid flows through porous media, a linear relationship between volumetric flow rate and hydraulic pressure gradient is established [6]. Darcy law is an empirical law and is typically used in the calculation modes of the development of oil and gas fields.

In the work and for the convenience of the interpretation of the research results, we have used the values of pressure gradient to calculate the permeability coefficients of water model (kw). For this purpose we used the formula of Darcy:

L is the length of the model, cm.

Graphical presentations for the relationship between water permeability of the cores and the applied pressure are shown in Figure 3. 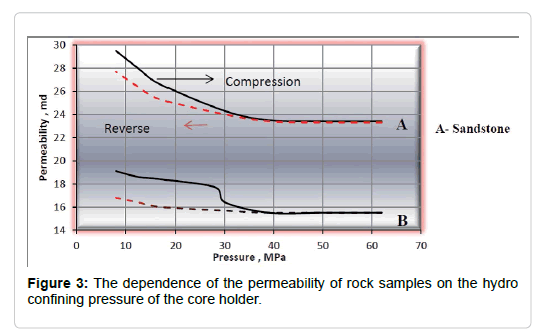 Figure 3: The dependence of the permeability of rock samples on the hydro confining pressure of the core holder.

Depending on the magnitudes of the applied pressure, rock matrix undergoes plastic or elastic changes. The study revealed that core samples of sandstone and carbonate rocks in different degrees respond to the applied external comprehensive compression (hydro confining pressure). The result of this respond is represented by the reduction in the permeability of the core models. As can be seen from Figure 3 (curves A and B), samples of carbonate rocks are less susceptible to the change, that caused by applied external pressure, rather than Sandstone samples. This is due to the different structures and compositions of the rocks. It is also noted that at high compression pressure (over 40 MPa for sandstone, and 32 MPa for carbonate rocks), rock compressibility is significantly smaller than the compressibility at low pressures (respective to the rock pressure). This is because the closer packing of grains species, as well as the compaction of cementing material occurs at relatively low pressure.

The sharp decline in the coefficient of permeability, for samples of carbonate rocks at pressures of 28-30 MPa during compression (Figure 3) curve B, is apparently due to closure of micro cracks [7].

In the reverse process of stepwise reduction in the hydro confining pressure, there is a deformation delay, due to the applied pressure, of the core sample, i.e., the phenomenon of mechanical hysteresis.

In order to exclude the “overflows” of fluid between the collar walls and the surface of core samples, hydro confining pressure of core holder must exceed the discharge pressure of the flow liquid with not less than range of 3.0-3.5 MPa. This range in modern flow units is maintained automatically. When carrying out laboratory studies of flow models with water proofing compositions, that intended to enhance oil recovery, will lead to a significant increase in the discharge pressure, and hence the need to maintain high hydro confining pressure of the core holder. The changes in the permeability and voids capacity of core samples (during their deformation) will significantly affect the injection pressure of these compositions. Also significant pressures are possible when testing the strength (pressure “breakthrough”) of the created hydro-screen.

It is shown that as a result of the “necessary” increase in hydro confining pressure of core holder (to the maximum in the experiment) significantly reduced the permeability of the investigated core samples: 18.8% for the samples of carbonate and 21% for sandstones. Thus, the pressure required to break-through the waterproof screen, at the laboratory conditions, is always overestimated and thus contributes unavoidable error in the accuracy when processing of the research results. The introduction of the correction gives a more accurate characterization of the discharge pressure and breakthrough pressure of the hydro screen of waterproofing compositions.

In this work, the example of the core samples of carbonate and sandstone rocks shows the influence of external hydro confining pressure of core holder on the flow properties of these samples. This influence is expressed as a change in the capacity of the voids and the coefficient of permeability and, respectively, change in the pressure of the liquid injected through the core.

Thus, in investigating water waterproof compositions and polymeric compositions, gels, etc. and when working with high hydro confining pressure (using laboratory equipment for evaluating the flow properties of the core sample), it is necessary to consider the decrease in the permeability of the core sample. This reduction in the permeability is due to the mechanical elastic deformation and the consequent further increase of the discharge pressure during the flow of fluid through the core sample.

Copyright: ©2018 Sudad Al-Obaidi H, et al. This is an open-access article distributed under the terms of the Creative Commons Attribution License, which permits unrestricted use, distribution, and reproduction in any medium, provided the original author and source are credited.
Top