Introduction: Malaria, a disease caused by protozoan parasites of the genus Plasmodium. Despite the premunition, some adults still experience the severe form of malaria. The study hereby aims to investigate the involvement of Th1 cytokines profile in the resistance to severe malaria in endemic areas. Patients and methods: It was a prospective study with an analytical focus on a 3-year period from July 30, 2015 to February 23, 2018. The study covered 150 patients, 50 patients suffering from simple malaria, 50 others hospitalized for the severe form and 50 witnesses. All the analyzes were performed within the Immunology Laboratory of the University Hospital of Cocody. Results: It is clear that, the average level of antibody according to the clinical status is meaningless, and Th1 cytokine levels (TNFα, INFγ, IL-12) are highest in severe malaria compared to simple malaria and witnesses. Moreover, there is no correlation between the average level of Th1 cytokines and the average rates of antibodies. Conclusion: Severe adult malaria in endemic areas is associated with cellular immunity and this is not dependent of the premunition and acquisition of IgG antibodies.

Malaria, a disease caused by protozoan parasites of the genus Plasmodium. Only P. falciparum is the most formidable and deadly [1]. Sub-Saharan Africa bears a disproportionate share of the global burden of infection.

According to the latest WHO estimates released in December 2016, there were 212 million cases of malaria in 2015 and 429,000 death [2]. In the world, especially in Africa, children under 5 are at risk of developing severe and complicated forms of the disease [3] due to the lack of premunition. In Ivory Coast, malaria is hyperendemic and is transmitted throughout the year with an upsurge during the rainy seasons. Its morbidity is 42.28% for a mortality of 15.29% in children under 5 [4]. The slow and progressive acquisition of premunition is coupled with that of protective IgG class antibodies during reinfections [5,6]. Passive immunity transfer experiments have revealed the central role of IgG immunoglobulins in the mechanisms of protection against psalmody infection [5,6].

In endemic areas, the long period of establishment of this premunition would explain the resistance of adults against severe forms of malaria. However, according to unpublished findings in Ivory Coast, about 2% of apparently immunocompetent adults would make severe forms of malaria infection. This could be explained either by the hypothesis of individual HLA-dependent susceptibility, or, to the role of cellular immune response that we explore in this study. That role of cellular responses, although demonstrated in the control of experimental malaria infection, is not well-informed about the impact of age [7]. However, it is known that, adults are more resistant to infection with Plasmodium berghei than young rats [8]. Authors showed how this susceptibility to Plasmodium berghei infection is associated with TCD4+ CD25+ and IL-10 cells in the young rat, whereas resistance in adults is associated with high levels of cytotoxic TCD8, NK [8]. In the same line, studies on the dendritic cell have demonstrated how Th2 profile induced by dentitric profile CD4 is associated with susceptibility to Plasmodium berghei infection in the young rat, whereas resistance is related to Th1 profile induced by CD4+ cells in adults [9].

Thus, if the role of the immune profile associated with animal resistance (rat or mouse) has been well demonstrated, in humans, we know few. The aim of our study is to evaluate, in human, how cellular immunity through Th1 profile could be related to resistance in living in malaria endemic area.

The study covered 150 people aged from 16 to 65 living in malariaendemic areas divided into 3 groups: 50 patients with simple malaria, 50 with severe malaria according to WHO definition criteria [10]. 50 uninfected witnessed with a thick negative drop without clinical signs of malaria and other pathologies. They were selected respectively in the medical services of Abobo (eastern neighbourhood of Abidjan) in the emergency services of CHU de Cocody (southern neighbourhood of Abidjan) and the National Blood Transfusion Center of Abidjan, after their consent.

All the patients have received a venous blood sample for the determination of Plasmodium IgG, Th1 cytokines for blood smear and thick blood smear in order to determine the parasite species and parasite density.

The cytokines were dosed at Immunology Laboratory of Medical Sciences of Abidjan by Elisa Sandwich under the different references of cytokines, TNFɚ reference (BE55001), INFγ reference (BE45201), IL-12 reference (BE45621). The controls were diluted to half and the concentration read from the calibration curve was multiplied by the dilution factor. For each cytokine the dosage of the sample was made in triplicate in the titration plates and the average was calculated for each sample and expressed in Pg/ml.

The dosage of IgG antibody was carried out by chemiluminescence in each duplicate serum and the average was calculated and expressed in μg/ml.

The wording of data was carried out with Microsoft Excel® software. The statistical analysis of these data was carried out with the software Epi Info® 2008 (version 3.5.1) allowed to compare the rate of Ac and Th1 cytokines during the evolutionary steps of the disease (severe, simple, witnesses) thank to the non-parametric tests of Mann Whitney and Kruskcal Wallis. Th1 cytokine level has been correlated with anti- Plasmodium antibodies thank to Spearman rank test.

In the severe form, the average rate of anti-Plasmodium IgG is not statistically higher in the simple form than in the asymptomatic carrier (Figure 1). 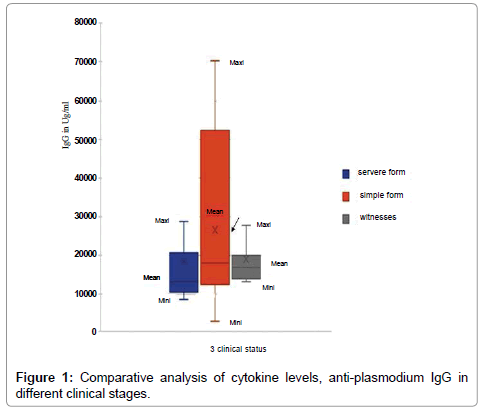 However, the Th1 cytokines (TNFα, INFγ, IL-12) in Figure 2 have statistically higher average rates in the severe form of malaria than in both healthy carrier and simple form (p <0.05). 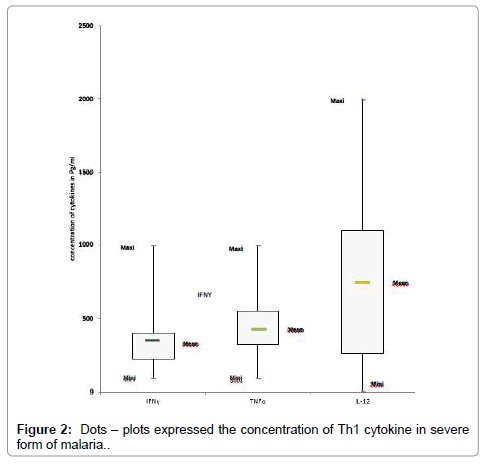 Figure 2 shows the average level of cytokine (pg/ml) on the ordinate and clinical status on abscissa. The dot-plots express the distribution of average rates of cytokine of patients in each clinical group.

• Blue dot-plot expressed the mean of INFy concentration with maximum and minimum.

• Green dot-plot expressed the mean of TNFɚ concentration with maximum and minimum.

Figure 3 shows the evolution of the 3 cytokines (A: TNFɚ, B: INFy, C: IL-12) levels in Pg/ml as a function of anti-Plasmodium IgG average level in μg/ml. Figure 3: Correlation between cytokines concentration and IgG anti-Plasmodium falciparum during the evolution of infection

• Dysplayed correlation between the concentration of IgG anti- Plasmodium falciparum and the mean of TNFɚ ( R2=0.0139)

• Dysplayed correlation between the concentration of IgG anti- Plasmodium falciparum and the mean of INFy. ( R2=0.0123)

• Dysplayed correlation between the concentration of IgG anti- Plasmodium falciparum and the mean of IL-12. ( R2=0.0086)

The understanding of mechanisms that try to explain resistance or susceptibility to the severe form of malaria is not an easy task. It is recognized from the observations that, the adult is more resistant to infection because of the premunition [5]. In animals, these observations provide evidence.

In fact, the studies of Esther Adam and al showed that susceptibility to Plasmodium berghei infection is associated in young rats with high levels of TCD4, CD25 + cells and cytokine IL-10 whereas adult resistance is associated with a high level of cytotoxic CD8 + and NK cells [8].

Dassé’s work also shows how the OX62CD4 + dendritic cell direct cellular immune responses to the resistance of adult rats to Plasmodium berghei infection [9]. TCD8 + cells are able to cause the elimination of host-infected cells by redundant mechanisms in which INFy and TNF are identified as cytokines playing an important role during malaria infection [11]. This resistance in mice is dependent on signals related to the early production of INFy, IL-12, and TNFα [12,13] in humans.

A robust INF response is associated with lower susceptibility to infection [14,15], even though reported in both humans and mice, that excessive INF production can lead to immunopathology inducing severe complications [16]. In our series, high levels of TNFα associated with severe malaria (427Pg/ml) are found, whereas in the simple form this cytokine has low levels. These results are in line with the study on malaria and the human immune system which states that, with regard to pathogenicity, TNFα levels are positively correlated with both the severity of the disease and the fever due to malaria [17,18].

Thus, polymorphism of a single nucleolus in the promotion region of TNFα in position -308 is associated with high TNFα production and increased risk of developing or not developing Plasmodium falciparum cerebral malaria [19,20]. These data could explain these high levels of TNFα in the severe form. Like TNFα, pupil levels of INFy (350.60Pg/ ml) are associated with severe malaria. These results confirmed by previous studies show the participation of these cytokines in the immunopathological mechanism leading to serious complications [21].

Both cytokines are of the Th1 profile. They are without the induction of IL-12 secreted by the dendritic cell.

The average level of IL-12 raised in our study confirms these data that are challenged by studies in severe malaria and IL-12 [22-24]. The premunition (humoral immunity) is known to be associated with severe malaria resistance in adults living in endemic areas [25]. Cellular immunity, as reported by experimental evidence, is associated with resistance [8]. In our series, the correlation between the markers of both immunity profiles is not revealed during the clinical stage of the infection (Figure 3). That could be explained by the action of suppressive immunity through IL-10, which secretion is increased during humoral defenses [26]. This cytokine carries out its suppressive action on Th1 responses.

On the contrary, the animal model, where it is easy to correlate the immune profile to susceptibility or resistance, in humans, many reasons including the evolution of the plasmodial strain from an individual to another. The immune response face to that evolution of the parasite, the states of co-morbidity in patient subjected to the environment does not allow superimposing the animal model in these cases, without having previously mastered the influence of those factors.

In humans, demonstrating the impact of the immune profile on the course of infection could help to strengthen the means of preventing malaria infection by possible manipulation of immune responses.

We appreciate the contribution of Immunology-Hematology department of CHU Cocody-Abidjan, the Centre National de Transfusion Sanguine-Abidjan- Côte d’Ivoire. We would like to thank Professors Sombo Mambo François, Alioune Dieye, Romuald Dasse and the head of the General Hospital of Abobo and the Emergency department of CHU Cocody for their contribution to the different stages of this study.

The work was supported by TCHAD Ministry of Health.

The authors do not have any conflict of interest.

Copyright: ÃƒÂƒÃ‚ÂƒÃƒÂ‚Ã‚Â‚ÃƒÂƒÃ‚Â‚ÃƒÂ‚Ã‚Â© 2018 AgnÃƒÂƒÃ‚ÂƒÃƒÂ‚Ã‚ÂƒÃƒÂƒÃ‚Â‚ÃƒÂ‚Ã‚Â¨s TD, et al. This is an open-access article distributed under the terms of the Creative Commons Attribution License, which permits unrestricted use, distribution, and reproduction in any medium, provided the original author and source are credited.
Top