Objective: To determine the prevalence of tetanus in women of childbearing age and to find out associated factors.

Patients and Methods: Prospective study for descriptive and analytical purposes of tetanus cases in women of reproductive age registered in the Infectious Diseases Department at the Brazzaville University Hospital between January 1st, 2018 and July 31st, 2019.

Conclusion: The situation of tetanus in women of childbearing age is worrying at the University Hospital of Brazzaville with a high prevalence despite the existence of a vaccine. It is therefore important to prevent this disease by systematizing tetanus vaccination within this target population group.

Tetanus in women of reproductive age keeps raising a real public health problem in sub-Saharan Africa despite the existence of an effective vaccine [1,2]. If the prevalence of this condition decreases in newborns and children through routine vaccination, in women-young adults, the vaccination schedule according to national vaccination programs is almost nonexistent [1]. The absence of tetanus immunity in women of childbearing age later exposes the future neonate to neonatal tetanus. In Congo, few studies have addressed the issue of tetanus and to our knowledge; this is a first study on this condition covering Congolese women aged between 15 and 49 years at Brazzaville CHU.

The objective of this study was to determine the prevalence of tetanus in a population of women of childbearing age and to investigate associated factors. The results and conclusions will be subject to recommendations for the Congo Expanded Program on Immunization and other health structures carrying out the vaccination activity. This is to reduce the morbidity and mortality associated with this condition.

This was a prospective descriptive and analytical study of tetanus cases in women of reproductive age, registered in the Infectious Diseases Department at Brazzaville CHU during the period going from January 2018 to July 2019, that is, 19 months of study. This survey included women aged between 15 and 49 years, hospitalized during the study period, regardless of their immune status with respect to HIV and diagnosed with tetanus. Epidemiological variables (age, occupation, marital status, place of residence, level of education, socio-economic level, gestation and vaccination status with respect to tetanus), clinical (the reason for consultation time, consultation score, Dakar score of 1975, portal of entry, generalized or localized nature of tetanus on admission), therapeutic (antibiotic therapy, Serotherapy and route of administration, trimming of entry way) and progressive (hospital stay, cure, death and cause of death) were studied.

• Women of childbearing age: woman between 15 and 49 years old.

• The definition of tetanus is essentially clinical in front of trismus, contractures and paroxysm. 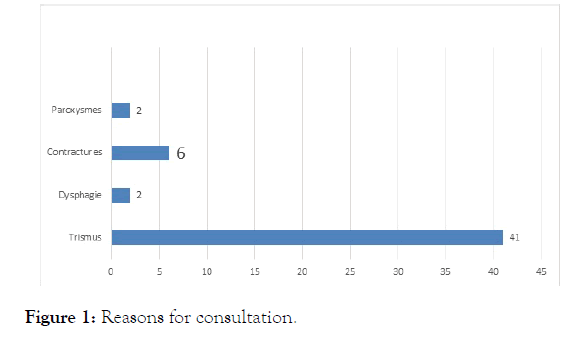 The results obtained during the present study are only fragmentary, taking into account the study period and especially the under-notification of the cases since some parents consult the traditional healers for religious reasons and beliefs related to the signs manifested by patients [3]. The difficulty encountered is also the lack of certain information in patient files together with the lack of accurate information related to the disease. However, this present work has shed light on the epidemiological situation of this vaccine-preventable disease in a sexually active population.

The tetanus of the woman of reproductive age raises a real problem of public health in Congo with a high frequency. The immunization schedule issued by the National Program for Expanded Immunization (EPI) does not include this category of population. Most SVEs in the African region countries do not include women of childbearing age [4]. The prevalence of TFAP is high at Brazzaville University Hospital. That of tetanus in all categories combined rose from 2.8% in 2008 to 5.27% in 2013 in the same department of Infectious Diseases [5,6]. The prevalence of TFAP, however, is lower than that observed in Dakar, Senegal and elsewhere [4,7]. Socio-cultural habits largely justify the differences observed in the authors. In Africa, tetanus remains a disease of the young due to the inadequacies of the expanded programs of vaccination in these countries which do not include this category of population. In the West, it is adults and senior citizens who are affected by the loss of vaccine immunity [8]. The low socio-economic level is typical of tetanus in sub-Saharan Africa as reported by several authors [3,6,7]. Women of childbearing age in this study were immunocompromised by HIV type 1 to a significant extent. Tetanus-VHI co-infection is no longer a new fact since it has been identified in Togo and in the Infectious Diseases Department of Brazzaville University Hospital [9,10]. In fact, HIV infection causes immunological disorders responsible for a weak T cell response and an alteration of the humoral immunity; what causes to patients: an abnormal primary and secondary antibody response, thus decreasing the effectiveness of vaccination [1,11]. The majority of FAPs had a doubtful or almost no vaccination status and in significant proportions they did not have children. These results are similar to those obtained in Dakar, Senegal, where more than three quarters of the women concerned were single without children [4]. In this country, as in Congo, the weaknesses of SVEs are known. The woman whose age is between 15 and 49 years old escapes the vaccination calendar. In addition, they are not routinely recoverable during prenatal consultations since they are singles without children. The intensification of national vaccination campaigns including this category of population, the systematisation of school and student vaccination should improve the epidemiological situation of this vaccinepreventable disease [4]. The long consultation times observed among FAPs in this series are similar to those observed in Dakar and Abidjan [4,7]. In these countries, ignorance about tetanus, socio-cultural beliefs coupled with poverty largely justify the late use of health structures for adequate care [4,6,7]. The diagnosis of tetanus is essentially clinical and was made in patients with trismus predominantly found in 80.4% of cases. The other reasons for consultation were the contractures and paroxysms already found in previous series in the same Service [5,6]. The ischemic and necrotic character of the portal of entry, which had not been achieved in more than half of the cases, and the obstetrical entry portal justify the generalization of tetanus to admission as reported by several authors [3,4,12]. Tegumentary and intramuscular entry gates were predominant and had a statistically significant influence on the death occurrence in 17 patients as well as a score between 2 and 3. These data are similar to those obtained in the same service in 2008 and 2013 [5,6]. In Dakar, poor prognostic factors during TFAP were an intramuscular or non-recovered entryway and a MOLLARET stage III at admission [4]. The long durations of hospitalization found in this series are almost similar to those obtained by other African authors [4,6,7]. However, they vary according to the evolution of the cases. They are very often due to the ischemic and necrotic characters of the portal of entry causing the continuous germination of the spores on the one hand and the financial difficulties to take care of the patient by parents with a low socio-economic level on the other hand than the virulence of the bacteria. This study found a high lethality at 33% but lower than that obtained in the general population (45.7%) in the same Service in 2013 [6]. However, the lethality of the TFAP at Brazzaville University Hospital with 33.3% is slightly higher than that obtained in Dakar, Senegal for the same category of population (28.4%). The factors of poor prognosis were the same.

The situation of the TFAP remains worrying at CHU of Brazzaville in relation to the prevalence which directly influences the risks of occurrence of neonatal tetanus in these pregnancies but also because of a high lethality. It therefore seems urgent to revise the EPI vaccination calendar by including women of childbearing age, systematizing tetanus vaccination in schools and students, or by multiplying immunization campaigns in the general population in order to significantly reduce the morbidity-mortality related to this condition.

Copyright: Â© 2019 Ibara O, et al. This is an open-access article distributed under the terms of the Creative Commons Attribution License, which permits unrestricted use, distribution, and reproduction in any medium, provided the original author and source are credited.