Kamal A Salih*
Faculty of Science and Science Education, Department of Biology, University of Sulaimani, Iraq

Background: Fungi have surrounded us and have affected our life, when changed or getting out from control it should be treated and when change to multi drug resistant it is difficult to treat by antibiotics so we can use plant extracts to produce valuable protection against infection. Objective: In this study, we used agar well diffusion method to investigate the effect of antifungal drug of plant extracts on Candida albicans. Methods: Candida albicans was isolated from oral cavity of Sulaimani Emergency hospital patients. The isolates consisted C. albicans (n=15). The microorganisms were divided into four groups in a factorial design: control, FGE with blackseed, FGE without black seed, black seed without FGE and antibiotic (Fluconazole). The minimum inhibitory concentration of FGE was calculated by using a gradient of concentrations and observing their inhibitory effects on C. albicans. Results: Fresh garlic extract (FGE extract) displayed evident inhibition against Candida albicans by producing more inhibition zone (p<0.05), Black seed extract (BL extract) showed no inhibitory effect on C. albicans at 10% concentration. However, synergism of BI with FGE have shown significant effects on it (P<0.05) and fluconazole had little effect on Candida albicans. Conclusion: The result suggests that FGE can improve the antibiotic sensitivity and BI don’t effect on C. albicans.

Fungi are eukaryotic organism that includes unicellular (like yeast) or very complex multicellular (like filamentous) microorganism, don’t have chlorophyll A (mean non-photosynthetic-heterotrophic). have rigid cell walls which contain chitin-chitosan, and they have relationships with animals, some of them symbiotic, commensals or parasite in/on animals which cause infection (like Candida albicans ), Candida is a type of yeast that is the reason for a number of undesirable symptoms, this yeast may be only those gut flora, an assembly of microorganisms that live-in mouth also digestive system [1]. The point when the C. albicans populace begin getting crazy for control eventually periods for stress alternately after a course from claiming antibiotics, this equalization is lost, the states for Candida have the ability to extend quickly until they control an expansive bit about your gut what's more infiltrating through under those circulation’s system also discharging its poisonous repercussions all around for muscles, too.

For a long time, human try to produce antifungal (An antifungal executor may be a medication regardless that specifically dispenses with contagious pathogens starting with a host with insignificant poisonous quality of the host) to kill parasite fungi, for example antifungal Fluconazole [2].

Fluconazole (F) will be used to treat contagious infections, including yeast infections of the vagina, mouth, throat (tube heading adrift from mouth of the stomach), abdomen (the area above the waist), lungs, blood, and furthermore other organs. Fluconazole may be likewise utilized will treat meningitis (infection of the membranes coating this cerebrum and spine) initiated by parasite. Fluconazole will be over a class from claiming antifungals known as triazoles. It meets expectations by abating this development from claiming growths that result in spoiling.

Other medically antifungal treatment can use plant like natural antifungal which may have greater effect than it, mostly focused on garlic, black seed and both together.

Fresh garlic extract (FGE) has been utilized as both sustenance and drug for a long time. It has been found that garlic helps prevent a number of infections. Some advanced investigations affirm that garlic has definite anti-microbial properties Also may be powerful against totally range bacteria, growths also infections. For addition, the antimicrobial exercises from claiming garlic need aid interfaced of the vicinity of a few bioactive mixes [3].

Too many years, black seeds (BI) have been utilized to their recuperating and also medicinal properties. Recently, specialists and researchers need aid to start to remember those stunning wellbeing profits of black seeds. Black seeds are the seeds of a plant called ‘Nigella Sativa’ that initially originate starting in Egypt. Numerous nations in Middle East used black seeds ‘the seeds from claiming favouring that might mend large portions diseases.

Too many years, black seeds have been utilized concerning illustration an incredible antibacterial, anti-inflammatory, antifungal, antiviral, cell reinforcement and antispasmodic. Black seeds might additionally make an incredible cure to icy Furthermore would Consume Eventually those figure fast at made over little dosages [4].

Fluconazole has more effect on Candida albicans or extract plant like garlic and black seed, synergistic of FGE and BI have more effect together or use separately on Candida.

The aim of the current project was to investigate the effect of Fluconazole on Candida albicans , throughout using fresh garlic extract and black seed.

To reach our aim, we want to experiment the effect of plant extract and antifungal to C. albicans by using agar-well diffusion.

Candida albicans was isolated from oral cavity of Sulaimani Emergency hospital patients. After taking a swab from their throat, the swab was subsequently used to grow the fungus on Sabaroud Dextrose Agar Plates. The plates were then brought back to the lab and incubated at 37°C for 48 hrs. Another culture of C. albicans was kindly provided by Dr. Haider Mussa from advanced microbiology lab. A subculture was then prepared for later use [6].

Fresh garlic was peeled off, and 100 g was weighed and mixed up with 200 mL distilled water then it was crushed using a juicer. The resulting paste was then centrifuged at 3000 rpm for 30 minutes. The supernatant was then filtered by a clean gauze. Later, the weight of the precipitate along with the unfiltered garlic fibres were weighed and subtracted from the original weight of the peeled garlic bulb. Thus, the final concentration of Fresh Aqueous Garlic Extract was calculated. In this experiment, we obtained 60% FGE (w/v) and used it as a stock solution to prepare other concentrations like 40%, 30%, 20%, 10%, 5%, 3%, 1%, and 0.5% (w/v).

10% black seed oil extract was prepared the same as the above procedure. However, there were some changes in the preparation process, the solvent used here was Ethanol, and this was to obtain oil extract from the black seeds. The mixture was then subjected to air drying in an incubator at 37°C for 72 hrs. Then, the dried product was used to prepare 10% Black seed extract in distilled water [7].

The minimum inhibitory concentration of FGE was calculated by using a gradient of concentrations and observe their inhibitory effects on C. albicans . It was noted that FGE at 10% completely inhibits the fungal growth. However, concentrations below 10% only partially inhibited the fungal growth. Thus, 10% FGE was the MIC. Due to time and resource availability constraints, we could not perform the same procedure for Black seeds and we hypothesized that 10% of black seed would show some inhibitory effects on C. albicans similar to FGE.

In this experiment, data analysis has been used for each action at least four times using Microsoft excel 2013. to compare the groups "one way anova" is used, but to compare "antifungal and plant extract" main effective t. test is used. P values of 0.05 were significant.

The antifungal defenselessness of C. albicans , FGE with BI and FGE without BI and BI without FGE and F is summarized to Figure 1. The ranking is FGE Figure 1A: Show the activity of FGE without black seed, FGE with black seed, Black seed without FGE and Fluconazole on C. albicans . 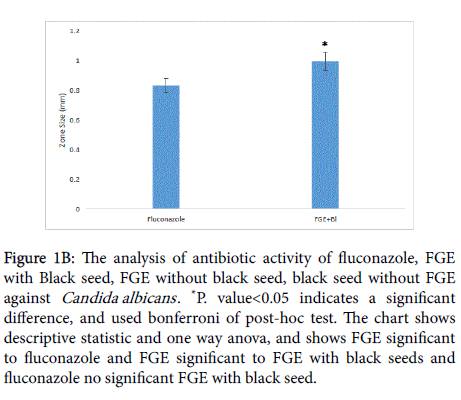 In this experiment, we discovered that FGE shows restraint properties against C. albicans . A standout amongst the way exacerbating garlic will be ajoene, and turned out antifungal that has been indicated to make successful against a number contagious strains. Ajoene will be structured from a compound named allicin also a chemical named allinase. At these two common mixes come into contact (by chopping this garlic, pulverizing it or by other means), they manifestation an antibacterial agonization named allicin, which after that combines to structure ajoene. However, allicin is rapidly oxidized, unstable and volatile, mean allicin rapidly breakdown after raw garlic is cracked. So it means garlic extract has more activity than an equal amount of allicin. In spite of the fact that this has turned out antifungal properties, those correct system toward which this happens is not reasonable. Concerning illustration with different antifungals, researchers suspect that it works by disrupting the cells walls of the C. albicans yeast cells.

By comparing to other papers like we got few zones than that paper because we used different way to extract plant, and bzhy santare bioscience we use agar well method. However, they use disk diffusion method to investigate the antimicrobial activities of fresh garlic extract, in that paper just FGE was used but we used FGE and black seeds for plant extraction, we didn’t mix fluconazole with FGE, however, we mix FGE with Black seeds and compared to fluconazole.

Fluconazole has few effect on Candida albicans and can inhibit growth of it by working in cytochrome and ergosterole of C. albicans , fluconazole has common side effects on humans like (headache, nausea, rash, diarrhea, stomach ache) and has rare side effects like; it may cause some unpredictable side effects including (dizziness, baldness). Candida albicans can make resistant to antibiotic and by mixing FGE and Fluconazole we get more yield of zone mean fluconazole with FGE have more effect on Candida than without FGE (Figure 2). 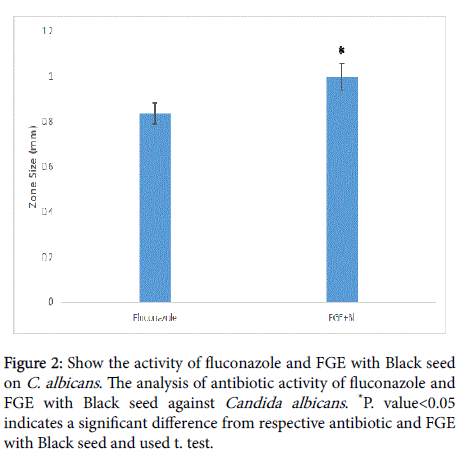 We use different type for extracting plant like for black seeds we use ethanol after drying BI and for garlic we used juice’s garlic, because that we get those data and have many ways to extract from plant and may better than the way we have used like maceration, percolation, soxhlet extraction and many ways which get different results for same sample.

In this experiment we may have done some errors in the steps, like; for FGE (choosing old or new of garlic, the way and quality of filtration for garlic, contamination of garlic by other microorganism, do pure culture for garlic or not), for black seeds (choosing old or new of black seed and should not damage, the calculating of percentage of ethanol when extracted), for fluconazole (the dating of expire of fluconazole), and should all steps do by aseptic technique.

Copyright: © 2016 Salih KA. This is an open-access article distributed under the terms of the Creative Commons Attribution License, which permits unrestricted use, distribution, and reproduction in any medium, provided the original author and source are credited.
Top