Introduction: Lung metastases are the second leading cause of lung resection, constituting 30-40% of all surgeries performed in the field of Thoracic Surgery. Resection of pulmonary metastases is an open issue that generates various controversies. Depending on the functional respiratory capacity of the pulmonary metastatic patient, may come to consider multiple surgeries in the same patient, as many as the patient is able to tolerate by his or her respiratory reserve.

Goal: Study of the results from surgical resection of pulmonary metastases in general and in particular those of colorectal origin. Patients and methods: Descriptive and observational retrospective study of 85 patients with pulmonary metastases who underwent surgery at our centre from January 2003 to December 2007.

Results: Surgery was performed in 85 patients, 56 males (66%) and 29 women (34%) with a mean
age of 55.14 years (range 22-82 years). The PMCRC (Pulmonary Metastases from Colorectal Cancer)
correspond to 30 patients, meaning a 35% of all resected metastases. Next in frequency were the lung
metastases of osteosarcoma, 16 (19%). And really close, metastases of soft tissue sarcoma, 11 (13%).
The average overall survival from PM (Pulmonary Metastases) of colorectal origin was 36.64 months (range 18.58 to 54.70 months). If we break down the overall survival at one and three years, we get a probability of survival of 96% compared to 62%.

Conclusions: Although surgery cannot change the biological essence of the metastatic process, complete resection of pulmonary metastases in appropriated selected patients, can provide a significant increase in survival or even a complete and permanent remission of the tumor.

Pulmonary metastatic disease is a condition increasingly prevalent. This is understandable due to the whole circulatory volume flows through the lungs for their proper oxygenation, being the risk of hematogenous lung metastases (most common route of spread) really high.

Except for the primary lung malignancies, which are spread to either lung, the most common tumors affecting the pulmonary parenchyma are breast cancer, gastrointestinal tumors, kidney cancer, melanomas, sarcomas, hematological (lymphomas and leukemia’s), germ cell tumors and rarely other cancers, among which are those of the ovary and thyroid.

In most cases, the control of the lung metastasis is dependent on the systemic treatment of the primary tumor. At present, there is a considerable experience in surgical resection of lung metastases. These resections are based on two objectives: the healing of disease or increased disease-free interval.

If we look historically, the surgical treatment of pulmonary metastases took place long time ago. In 1898, Gerulanos [1] , reviewing the literature, found 38 published cases of tumors from the chest wall treated surgically, in which there was direct invasion of the lung parenchyma. Five of these were removed, the oldest of which was published in 1855. The first case of lung metastases (nodules remote from the primary tumor) was published in 1882 by Weinlechner [2]; this lung metastasis resection was performed as part of a chest wall resection surgery due to sarcoma.

In the following years, other cases were published showing the will of curative intent in metastatic stage of the disease. In 1926, Divis performed the first resection as a separate procedure. But not until 1971, was published the first scientific experience with clearly and defined methodological criteria, relating specifically to pulmonary metastases from osteogenic sarcoma.

According to the international consensus, the indication for surgery is set if the following requirements are met: controlled or controllable primary disease; no metastases to another level or already resected and with good response; no other treatment should provide comparable or better results, acceptable lung function; surgical risk acceptable; and resectability of all visible lesions on CT / PET and bronchoscopy.

Thus, the surgical approach must meet three objectives: be the least aggressive as possible, enable the manual exploration-palpation of the lung and injuries, and finally get resection of all metastases. The most important surgical approaches are: median sternotomy, very effective in bilateral lesions but with severe disadvantages in access of posterior located lesions and lesions located at the left lower lobe; posterolateral thoracotomy in two times, via clamshell with or without transverse sternotomy, and posterolateral thoracotomy when it is only one hemithorax.

Bilateral thoracotomy or median sternotomy are accepted surgical approaches for bilateral pulmonary metastases. The video assisted thoracoscopy (VATS) does not allow optimal intraoperative identification of all pulmonary metastases, so this approach is not considered routinely; only in cases previously agreed and selected, this type of approach may be indicated for resection of lung metastases. Currently, there are few studies that analyze and compare the effectiveness of video surgery versus standard thoracotomy in the treatment of pulmonary metastases. Some authors recommend VATS as a diagnostic tool for metastases, especially in situations of diagnostic doubt. Others, are supporters of this approach only in situations of resection of metastatic carcinoma, never in sarcomas. An event currently under discussion is the formalization of the use of VATS for pulmonary nodules less than 3 cm and peripheral location.

The goals of surgery force us to the removal of all metastases with maximum preservation of functioning parenchyma. Therefore, the most common surgical technique is wedge excision (economic resection), also called, atypical segmentectomy; versus lobectomy (much less frequent and economical) or pneumonectomy (not economic at all and exceptional).

Thus, lung metastases are the 2nd cause of pulmonary resection, constituting 30-40% of all surgeries performed in the field of Thoracic Surgery. Resection of pulmonary M1 is an issue still open, generator of various controversies.

Depending on the residual respiratory function of the pulmonary metastatic patient, may come to consider multiple surgeries in the same patient, as many as the patient is able to tolerate, depending on their respiratory reserve. Finally, it should not be forgotten that the presence of a single pulmonary nodule in patients with a history of previous malignancies, can pose difficulties to distinguish between M1 vs. lung primary tumour, and consequently consider lung resections “at full” when they could be not necessary.

The proper oncologic resection of pulmonary metastases has shown to be associated with longer survival of patients; being surgery in some cases curative. As conditions and resection techniques have evolved, the morbidity of such surgery has declined to be able to provide improved survival for patients, with a tolerable morbidity and mortality. Finally, the contribution of systemic chemotherapeutic oncologic treatments with proven efficacy, has an impact on the overall effectiveness of the surgery, thanks to the encompassed multidisciplinary treatment.

The aim of this paper is to study the results of surgical resection of pulmonary metastases in general and in particular those of colorectal origin.

This is a descriptive retrospective and observational study, of patients with pulmonary metastases surgically treated in our centre over a period of five years (January 2003-December 2007).

There were in total 85 patients; for identification we used the service computerized database. In addition, we conducted a review of survival by corroborating the last control of the patient, finalizing in the period of June 2009.

Facilitating the number of cases and percentages for categorical and ordinal variables. Their percentages were expressed graphically by bar graph and / or sectors. In case of quantitative variables, they were described using the average value with its standard deviation. For the age variable, it was expressed graphically using box plot (boxplot). Chi square test or Fisher exact test, were used for comparison of qualitative variables.

85 patients were included into the study, who had undergone lung resection at our institution for metastasis from various types of tumours. 56 (66%) were male and 29 (34%) women. The mean age was 55.14 ± 15.3 years (22-82). Thus, we can show the distribution of the different lung metastases according to the location of the primary neoplasy (Figure 1). 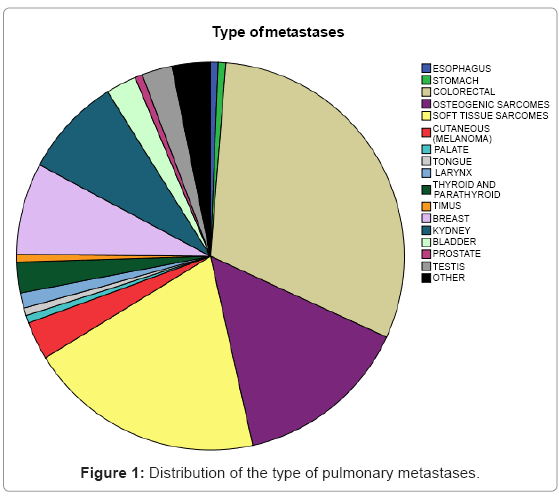 Figure 1: Distribution of the type of pulmonary metastases.

We note that metastases of colorectal cancer correspond to 30 patients, meaning 35% of all resected metastases. Next in frequency, we find lung metastases of osteosarcoma with 16 cases (19%). And very closely, the metastases of soft tissue sarcoma, with 11 cases (13%).

Regarding the presence of extrapulmonary metastases, we note the absence in most cases, finding only 12 cases (40%). 8 cases (27%) were liver metastases, of which 6 (20%) were diagnosed and treated prior to the diagnosis of PM, and 2 (7%) synchronous. In the course of the disease, other types of extrapulmonary metastasis are observed but less frequently, 3 patients (10%) in brain, 2 patients (7%) in the ovary, a case (3%) in adrenal gland, and a case (3% ) in spermatic cord and testis.

A total of 30 surgical interventions for lung metastases of colorectal origin were performed and carried out all of them by posterolateral approach. 19 (63%) were atypical resections (wedge / wedge), 5 (17%) lobectomies, 4 (13%) pneumonectomies and 2 (7%) in block resections. 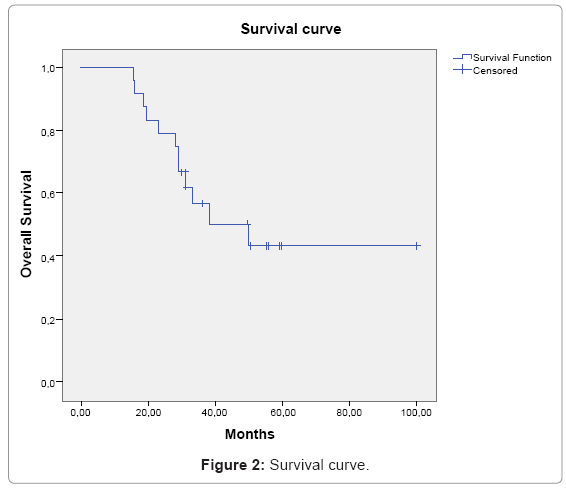 We have wanted to review our experience with pulmonary metastasectomy and its results, given the importance of this issue in our current environment.

In the present study we found that the colorectal carcinoma as the most frequent, being 35% of our patients, similar to what happens in most studies [3]. Colorectal carcinoma is the third most common cancer and second leading cause of death by cancer in developed countries. Approximately 10% of patients with this diagnosis develop pulmonary metastases, while only 2-4% of them have lung metastases as the only location of recurrence [4].

Surgical resection of pulmonary metastases is considered a standard procedure, with a relatively low morbidity and mortality (0.5% -1.5%) [5], usually related to the amount of resected parenchyma.

We observed that pulmonary metastases are usually asymptomatic and bilateral, which is consistent with other papers, given the unusual tracheobronchial or mediastinic impairment [6]. Some authors recommend preoperative fiber optic bronchoscopy or mediastinoscopy, if central involvement is suspected or if the pulmonary metastases are adjacent to tumors that tend to the endobronchial involvement, such as breast cancer, colon or kidney [6]. However, others recommend performing this procedure as a routine [6,7]. In our center, in contrast to primary lung cancer, it is not performed routinely, only in certain cases with suspected endobronchial involvement and bilaterality of the metastasis.

Regarding the choice of the approach, it must meet three requirements: be the less aggressive as possible; enable, in most cases, the manual palpation and allow the removal of all metastasis [5]. In our center, posterolateral thoracotomy is used as a route of choice, being unique in the unilateral metastases, and sequential in the bilateral. Other studies [8] considered technique of choice as the median sternotomy in the presence of bilateral metastases, and posterolateral thoracotomy for metastasis with unilateral location.

Role of videothoracoscopy [1,9] is discussed in the treatment of unilateral metastases. Many of the works that discourage it, were performed by early generation devices. It is worth emphasizing the study of McComarck et al. [8], which detected 56% of previously undiagnosed metastases. We believe that these criteria should be reviewed after the emergence of new generation CT scans, especially fine cut helical CT scan [10,11], that allows better characterization of the presence and location of the lesions.

Finally, commenting the review by Pfannschmidt et al. [12], in which the type of approach was not a prognostic factor. From the point of view of the type of resection and as we have seen in our series, the wedge resection is still the most common. This is due to metastases which is usually peripheral because of the higher irrigation of this area. There is evidence that major procedures like lobectomy or pneumonectomy do not improve the results [13].

Not to forget the existence of extrapulmonary metastases that confer a worse prognosis; considering concomitant resection of liver metastases [14], reports large survival benefit, something observed in 8 cases in our series.

During the last 20 years there were published reports on several retrospective series of patients with pulmonary metastases from colorectal cancer. The overall survival of 5 years was described ranging between 21 and 56% [4,9,15,16], probably due to the heterogeneity of the selection criteria and the variability in the multimodal treatment done. In our series, we obtained a median overall survival of lung metastases from colorectal origin of 31.23 months, which is in the middle range of what is described in the published series (19-41 months) [9,15-17], and a median survival of 36.64 months.

We conclude that although surgery cannot change the biological essence of the metastatic process, a complete resection of pulmonary metastases in selected patients, can provide a significant increase in survival.

Copyright: © 2012 Claramunt NP, et al. This is an open-access article distributed under the terms of the Creative Commons Attribution License, which permits unrestricted use, distribution, and reproduction in any medium, provided the original author and source are credited.