A detailed study to propose new design support systems for underground mine was carried out in this paper. The depth was increased to develop the production in accordance with the vein.The cut and fill mining method was selected for this mine in line with the geometry of vein, topographic specifications, and annual production rates.Excavationsize, distance between stope and decline, depth, and the impact of fault governedthe induced stresses. Different depths in multiple excavations were analyzed in this study especially on decline area. The rock properties of investigated areawere defined from the field and laboratory test for each rock type. Support systems for the decline were designed based on the suggestions of the Rock Mass Rating (RMR) system and the Q system for rock mass classification. Induced stress on different levels were calculated to define Stress Reduction Factor (SRF) and applied to predict the support system by Q system. New method namely Hybrid Numerical Empirical Model was developed to support requirement analysis in cut and fill mining method. The support system requirement influenced by depth. The shotcrete will be thicker and rock bolt space more closely as increasing the depth.

Kirsch, was the first publisher for the induced stresses distributions of a circular tunnel [1].Hoek and Brown, developedanadditional tool that can be predicting the induced stresses distributions [2]. The impact of induced stresses on stope stability was applied to Mathews empirical stability graph method [3,4]. Rock massclassification, Qsystem is proposed for predicting underground support system [5,6]. The effects of induced stresses are determined by comparing the maximum tangential stresses (σθ) to the intact uniaxial compressive strength (σc) in a similar manner to the Mathews’ method. Wattimena, 2003 applied the Mathews’methodon block caving mines in Australia and proposed a Hybrid NumericalEmpirical Model (HNEM) to predict induced stresses and to calculate the Q system for estimating support requirement on undercut and production levels [7].

The field site for this study is Cibaliungunderground gold minewhichlocated in the western part of Java Island, Indonesia (Figure 1). The resource is estimated to be approximately 1.5 million wmt gold with grade is estimatedto be 9.8 ppm.The type of ore is vein with low sulphidation.Geological mapping and geotechnical description were conducted in the field. 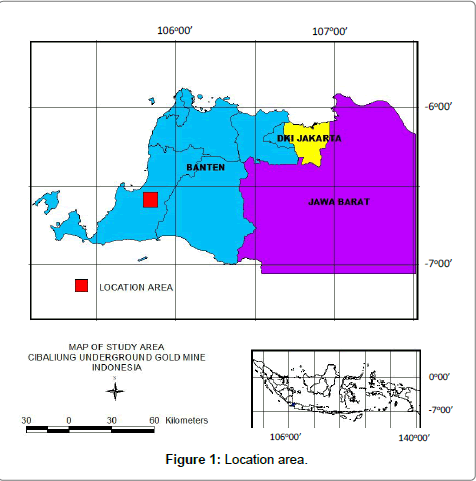 The host rock of Cibaliung deposit is in Honje Formation consists of andesite, basaltic andesite volcanic and volcanic breccia intercalated with tuffaceous sediment [8]. Andesite rock types, consists of andesite, andesite breccia, polymictic and monomictic breccia. Those host rocks are altered by chlorite-adularia and smectite-illite. The type of ore is a vein with low sulphidation epithermal deposit dominated by quartz vein. This vein follows the Cibaliung fault within NNW-striking/ENEdipping, with two shoot target Cikoneng and Cibitung ore shoot. The Cikoneng ore geometry is 250 m length, 2-10 m width and 200 m depth, whereas Cibitung shoot geometry is 150 m length, 2-15 m width and 300 m depth with dip of ore is 80o. Some minor faults occur throughout the hanging wall excavation with strike NE-SW dip 75°. Angel of this fault with axis of tunnel is 21°.The geology of Cibaliung can be seen in Figure 2 [9]. The rock mass rating (RMR) system [10,11] and the Qsystem developed by the Norwegian Geotechnical Institute [5] were used to classify rock masses. The physical and mechanical properties of the rocks were investigated based on rock mass classifications from the field and laboratory studies on intact rock samples.

In this study, RMR and Q-system classifications were applied rock mass characterization. Some parameters were determined for RMR, includes uniaxial compressive strength (UCS), Rock Quality Designation (RQD), discontinuity spacing, discontinuity conditions, and groundwater conditions. The results of this study are shown in Table 2 to Table 4 for RMR.RQD, number of joint sets (Jn), joint surface roughness (Jr), joint weathering and alteration (Ja), joint water reduction factor (Jw), and stress reduction factor (SRF) are parameters for Q to quantify rock mass. RMR rating can be determined from the classification proposed by Bieniawski, [10]. Meanwhile, the Q value of a rock mass can be calculated by the equation given below, as determined in the classification proposed by Barton et al. [5].

Table 2: The rock mass classification of breccia smectite (hanging wall) based on the RMR.

Table 3: The rock mass classification of breccia chlorite (footwall) based on the RMR.

Table 4: The rock mass classification of quartz vein (stope) based on the RMR.

Design of support systems was carried out by considering the in situ stress, stress around the openings, and evaluation of failure conditions. In situ stress was calculated from equation (2) for different levels within each geological formation.

g = acceleration due to gravity (m/s2)

Hoek and Brown, proposed equations to calculate tangential stress around the roof and the wall of the openings on equation (3) and equation (4), respectively. The constants A and B are taken as 3.2 and 2.3 for a horseshoe-shaped gallery [2].

Since the influence of multiple excavations could not be predicted by the above mentioned equations, numerical modeling analysis is a proposed as a solution. Therefore Phase2® software is useful to predict induced stress on two dimensions. 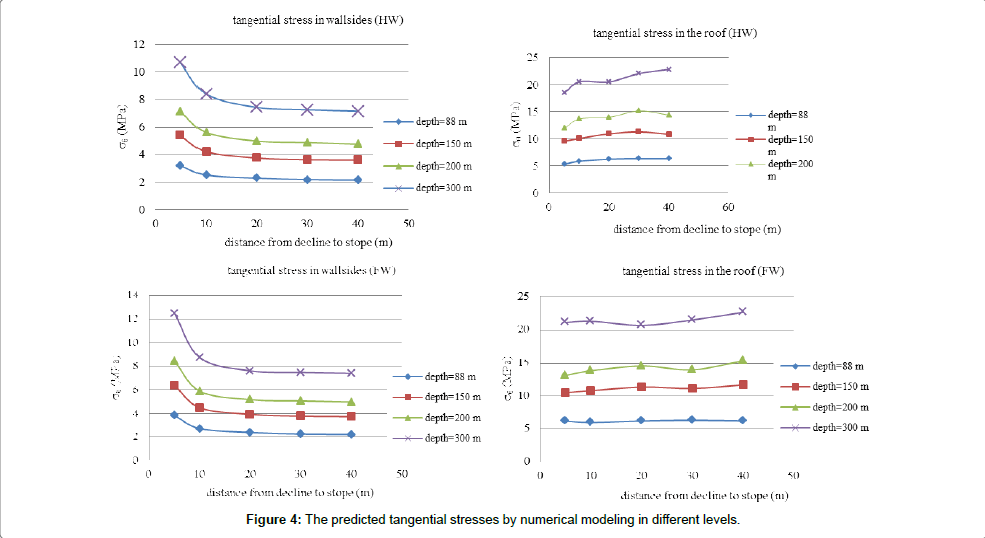 Table 7: The value of ratio σc/σθ for calculating rock burst.

Based on the relation between intact rock and tangential stress, the damage potential in the roof is higher than that in the wall sides. Given the condition in the hanging wall,a rock damage will be more likely to occur in the hanging wall when comparedwith the footwall excavations. The results suggest that there will be minor rock spalling when the activities below 300 m depth in the wall sides on hanging wall. However, low to moderate rock spalling will take place in the roof when the mine activities occurs under 150-200 m depth. At the depth lower than 300 m, high rock spalling is predicted to occur and necessitating a heavy support. Although the condition on the footwall was observed to be relative stable, low rock spalling could occur at the depth below 300 m.

Bieniawski, proposed guidelines for excavation and support of 10 m span rock tunnels in accordance with the RMR system. The current support system in Cibaliung underground gold mine determined by using RMR. The support systems of individual openings were designed according to the surrounding rock mass characteristic. The equations proposed by Barton et al. [12] and Unal [13], which includes rock mass classifications, excavation width, span excavation, and material rock density was used to determine the splitset number and shotcrete thickness to support requirements [13].The results from equation 5 to equation 8 are shown in Table 8 and Table 9.

In 2003, Wattimena, etalhasproposed a Hybrid Numerical-Empirical model to predict the support requirements in block caving mining method [7]. This model is the combination of numerical modeling and empirical analysis to design the support requirements. From numerical modeling, induced stress on complex design of mine method can be predicted, and the result is applied to the empirical Q system to design support system. To calculate the Q values as equation (1), induced stress is important as parameter for SRF. To describe SRF, Barton et al. [5] and Grimstad and Barton [6] proposed the relation between tangential induced stress and intact rock uniaxial strength [5,6]. Table 10 shows the classification of SRF, and the ratios between tangential stress and intact rock uniaxial strengthare given in Table 11.

By using Q system to design the underground support, the influence of induced stress on differentlevels can be predicted. Based on SRF values, we can obtain minimum and maximum range of SRF as input to calculate the Q values. Based on the values of ratio between tangential stress and intact rock strength, the research area could be classified into four classes of SRF. The classification of the SRF is given in Table 12. To determine Q values, other factorsas seen in Table 13 should be considered as well. The results of Q values are shown in Table 13.When the SRF classification of Barton et al. [5] and Grimstad and Barton [6] was applied, the range of Q values are 0.01 –2.04 and 0.02 – 3.06 (extremely poor to poor). Meanwhile, the Q values on footwall are higher than that on the hanging wall. The Q values are between 2.20–4.40 and 3.58 – 7.15 which mean poor to fair. Based on Table 13, it can be seen that the lowest Q values based on calculation using equation (1) is located on the roof. Therefore the roof condition will be considered to analyze the support requirements.

The Qvalue is then used to predict the supportsystem requirement. Two additional parameters should be considered in using the Q system for predicting the support systemfor an underground excavation are Excavation Support Ratio (ESR) and equivalent dimension.

ESR values are taken as 1.60 for permanent decline, ramp, and shaft that are expected to serve for the whole production life of mine. The height of the hanging wall and the footwall declines are 4.8 m. The value of De is 3 m when the ESR for permanent decline.The support system can be determined by plotting the De values against Q that was proposed by Barton et al. [5]. The sample of the support requirement estimationis given in Figure 5.

For the footwall decline, the Q values are higher than that on the hanging wall decline. Similar with the hanging wall decline, the highest tangential stresses occur in the roof. The stress was observed to increase with increasing depth. For example, when the activities took place at depth ≤ 200 m, the Q value is estimated to be in the range of 4.40-7.15 and classified under faircategory. The proposed support system requiresbolt length 1.7 m with space 1.6 m. and shotcreteis not necessary. When the activities increase up to 300 m, the support system includes shotcrete 4-5 cm, bolt length 1.7 m and bolt space 1.8 m. Detail predicted supports are given in Table 14.

Based on Qsystem, which is analysed by using Hybrid Numerical Empirical Model the requirement of rock bolts length aresame for all rock mass classifications that are 1.7 m. Recommendedsupport system by Q classification influenced by depth. The shotcrete will be thicker and rock bolt space more closely as increasing the depth. When the activities at 88 m depth, the support system requires shotcrete 4 – 5 cm thickness and bolt spacing 1.8 m.Meanwhile, the shotcrete is 12 – 15 cm thickness and bolt spacing is 1.0 m are required for depth up to 300 m. From this study the advantage to calculate support requirements using SRF is influence of induced on different levels could be predicted.

The authors would like to acknowledge PT. CibaliungSumberdaya management for the opportunity to conduct our research and great appreciate to SusenoKramadibrata for the support to use facility in Geomechanics Laboratory, Department of Mining Engineering ITB. The first author also would like to thank to DIKTI Indonesia to support the scholarship.

Copyright: © 2014 Purwanto, et al. This is an open-access article distributed under the terms of the Creative Commons Attribution License, which permits unrestricted use, distribution, and reproduction in any medium, provided the original author and source are credited.
Top