Spinal shrinkage is a creep which is caused by sustained compressive spinal loading. The shrinkage is a decrease of the discs’ thickness and the spinal column’s length. It is thought that the shrinkage is linked to the bulging of annulus fibrosus in diameter as well as a fluid loss from the intervertebral disc (IVD) in lumbar [1-4] in parallel with an increased and/or abnormal loading on other spinal tissues, such as facet joints [5-8]. It is suggested that the test of spinal shrinkage could result in an effective predictor of spinal load [5,9]. Therefore, its measurement is one of key factors in determining the risk of the development of low back pain (LBP) [10]. LBP is commonly seen and with a high impact in society [6,11-14].

It is advocated [9,15-20] that the spinal shrinkage can be tested by a precision stadiometer to find changes in stature, in standing and/or sitting postures [17,20,21]. It is commonly established that results of stature height measurement are reliable and also valid. Results from these studies in stadiometer have shown that it can be used for the load condition evaluation of lumbar spine. Until now, investigators have been studying the stature variation. Understanding how the relevant variables can influence the stature change may provide insights into the underlying the mechanism of LBP and the injury risk to the lumbar region.

Previous studies showed that the stature is not constant, but varies throughout the 24-h period, or termed as circadian variation [22,23]. It has been well accepted that the spinal shrinkage could be elicited by dynamical loading in sports activities, such as running [24] jumping [15] or by static spinal loading [4,25]. It is also shown that the spinal shrinkage could be affected by body mass [25], or a pregnant condition for women [9] but probably not by age [26].

In a specific investigation, [27] found that head posture, such as keeping the posture of looking down or up during prolonged sitting will have an effect on the spinal shrinkage. Thus, the loading posture such as front or back loading as commonly seen during baby keeping or package holding on shoulder, may also have an effect on the stature change. However, so far as we known, there has been no investigation regarding effects of the posture of shoulder loading.

Twenty two subjects including five females and seventeen males were recruited from the University population to take part in the study approved by local ethical committee. Before participating in the study, the subject should read and sign a consent form. Demographic characteristic (age, weight, height and BMI) was collected by a questionnaire to screen for inclusion and exclusion criteria. The corresponding value (mean (standard deviation (SD)) [minimummaximum]) was 24 (1) [23-26] years, 65 (6) [56-80] kg, 172 (5) [165- 182] cm, 22 (1) [19-24] kg/m2, respectively. Included criteria were that the participant had no current complaints of back pain. Exclusion criteria were included with spine pathology, spine surgery history, visual problem, pregnancy, obesity (BMI >= 30), current low back pain and consultation of physicians because of low back pain in the last year.

Stature shrinkage was quantified through a precision stadiometer as described in a publication [4]. The customized stadiometer consisted of a wooden frame which was tilted 15 degree backwards to the vertical line. An adjustable support was used for cervical, lumbar spine and lower extremities to keep a comfortable as well as a repeatable resting position [4,28,29]. During the measurements, the participants were required to stand with knee straight, to put the feet comfortably to evenly distribute the body weight and to lean back against posture supports. The arms were hanging straight on the body side. Unnecessary movements of the head were controlled through a soft cushion under the head together with a lateral wooden guide [29]. Through maintaining the eyesight at the mark 6 m away horizontally [4] head’s vertical and horizontal alignment was reached.

After the participant was located on the stadiometer in bare feet, then a head platform was moved downward until full contact was reached to the top of the head. The investigator moved the platform downward after the subject exhaled completely. He/she contacted the cranial aspect of the participant’s head where the stadiometer reading was recorded as the stature height. Each participant was measured in the morning from 8 am to 12 noon in order to eliminate the circadian characteristic of stature shrinkage [30,31].

At the beginning of the first stature measurement, participants were reclined in supine as Fowler’s position [33] for 10 min to unload the spine from the previous activity during the period of time from getting up to the laboratory. This position could be used as a normalization of spine height [17,18,28]. As suggested by [34] each participant stood statically for 90 sec before the measurement of stature shrinkage. After the participant was recorded as an initial position (normalized as 0) on the stadiometer, he/she was then required to have a spinal shrinkage procedure through static standing for 10 min with a load of about 20% bodyweight [4] by handing dumbbells over each shoulder evenly in two test sessions in a separate day. The subject was asked to choose one of two loading postures: front loading (FL) (Figure 1) or back loading (BL) (Figure 2) randomly in each test session. After releasing the load, the subjects were required to stand statically for another 90 sec. Then the shrinkage was measured again in the same method. Figure 1: A subject during the shrinkage period in front loading (FL). Figure 2: A subject during the shrinkage period in back loading (BL).

After finishing one test session with one loading posture, the subject was required to repeat again to finish the other test session on a separate day.

Spinal shrinkages from different gender in this study were pooled together during statistical analysis. One-way ANOVA was utilized to test the effect of loading posture. The alpha level was selected ≤ 0.05. 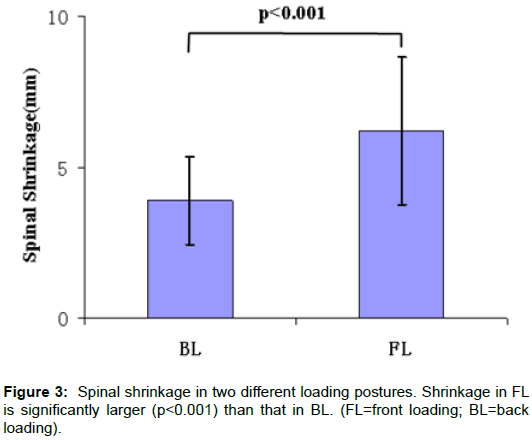 The results of the study point out that the loading posture has a significant effect on spinal shrinkage. The shrinkage created by front loading is significantly larger than that by back loading.

After 10 min standing, significant shrinkage (more than 3 mm) was found in stature with a shoulder load of 20% body weight in both back and front loading postures. It may indicate that there is a bulging of the annulus fibrosus in diameter, and/or a loss of fluid from IVD [1-4]. Furthermore, there might be a load increase on other spinal tissues, such as facet joints [4-8,29].

By comparison, under the condition of the same weight of external compressive load, the spinal shrinkage elicited by FL is significantly larger than that by BL as we hypothesize. The real mechanism for the different shrinkage is unknown in this study. However, one possible explanation may be the moment direction by shoulder loading. Just like the head with the eye looking down, the load in front posture may elicit a forward moment. In order to maintain a balance for the forward moment, the posterior ligament (and/or) muscles on lumbar spine will elicit extra force. Then, the shrinkage caused by a compressive loading together with the additional force elicited by the forward moment may make the total shrinkage larger [27]. The load in back posture, however, may cause a backward moment which makes the trunk produce a “hyperextension” effect [35]. The shrinkage caused by a compressive loading together with the elongation elicited by hyperextension may make the total shrinkage less [35]. Considering the structure of the trunk cross section in lumbar spine, in fact, the backwards moment could elicit less additional force on the lumbar spine because of short distance between the point of the back shoulder load and the position of discs in BL by comparison with the distance in FL.

There exist some limitations which may have some influence on the generality of the results. First, the loading time with 10 min seemed a little bit shorter than that in ergonomics activities, such as taking a knapsack, or carrying a baby, etc. Second, only 20% body weight was utilized as the shoulder load. However, 10% or 30% body weight would also be found in real situation, which may elicit a different result. Third, the sample was mixed with different gender. Rodacki et al. [9] pointed out a pregnant factor for female in spinal shrinkage. However, the influence of the gender in this study may be less since the pregnant women was excluded in this study. Future studies can have several levels for the “duration” variable, e.g., 10, 15, and 20 min. Then the ANOVA model needs to be enhanced by adding a new independent variable called “duration” and use multi-way ANOVA for analysis. In the same time, electromyography activation in posterior lumbar muscles [36] can be investigated to test the hypothesis of larger force in order to balance the greater forward moment caused by the shoulder load in FL condition.

In summary, the statistical results showed that the load posture has a significant effect on spinal shrinkage during 10 min loading. A front load, with a significant larger shrinkage, could be more likely to develop LBP than a back load during prolonged compressive loading.

Copyright: Â© 2018 Sun H, et al. This is an open-access article distributed under the terms of the Creative Commons Attribution License, which permits unrestricted use, distribution, and reproduction in any medium, provided the original author and source are credited.
Top