The atmospheric ground level water vapors (GLV) were collected during 2008-10 on daily basis by condensation method in Indo-Gangetic plains at sites: Roorkee (Uttarakhand) and Sagar (Madhya Pradesh). The two sites are located a few hundred kilometers away along the southwest monsoon track. Isotopic composition of GLV collected at both the sites is compared and it is found that the two isotopic spectra grossly correlate at most part of the spectrum indicating that although rainout process take place locally, its effect on the atmospheric water vapors can be observed over long distances. This opens up possibility of monsoon prediction through monitoring of atmospheric water vapor.

The southwest monsoon originating from Indian Ocean due to low pressure area caused over the northern and central Indian subcontinent brings large amount of moisture on the Indian sub-continent during the period mid June to September. Due to the complexity of the phenomenon, sufficient accuracy in onset of monsoon, its dynamics on the continent and the timing of its withdrawal is not well understood. As a result of systematic depletion in air moisture heavy isotopes composition with the onward movement of air moisture it is possible to track its movement using the isotopic signatures of water molecules.

In India, monsoon winds travels more than 2000 km from east coast to Northwest Himalayas and the movement of monsoon front on the isotope composition of precipitation was investigated [1-3]. These studies although characterized isotopes in precipitation but, did not provide any details on isotopes in air moisture. Since, precipitation is an event based phenomenon and that too mainly during monsoon; the results of these works could not be used for modelling and prediction.

Observation of stable isotope variation of atmospheric water vapour, which is not same in all regions, has an important significance to indicate the moisture origins and its transport. Using the isotopic signatures of water molecules, it is possible to track the movement of air moisture and an understanding of atmospheric ground level vapour and its isotopic composition is important to observe the monsoon dynamics and climate change studies [4]. It has been reported that the two principal sources of vapour influx, namely, the Arabian Sea (AS) and the Bay of Bengal (BOB) impart the characteristic isotopic signal to precipitation during both the summer and the winter monsoon seasons [5,6] and the same has been validated for summer monsoon also known as South-West (SW) monsoon in Indo-gangetic plains through wind trajectory and water vapour data [7]. However, the tracing of water molecules through their annual hydrological cycle and identifying the vapour and water sources and their temporal evolution in response to changes in meteorological and geographical controls can be achieved through investigating stable-isotopic composition of oxygen (18O), and hydrogen (2H or D) isotopes [8].

Stable isotope analysis plays a crucial role in integrating regional-tocontinental water cycles. The isotope ratios are affected primarily by the fractionation occurring at phase changes-principally in the transition during surface evaporation or in-cloud condensation. Therefore, stable water isotope ratio measurements can be used as a diagnostic tracer to investigate hydrological cycles over many scales. 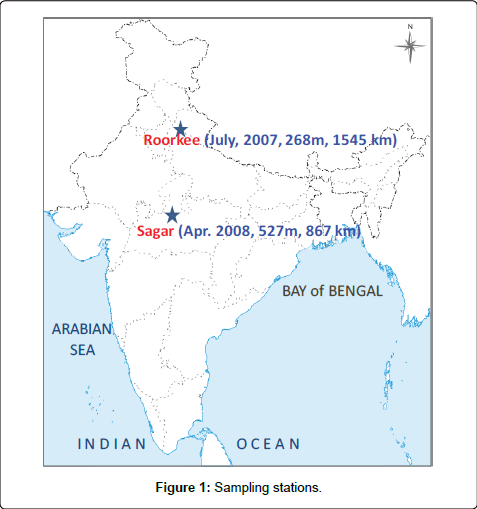 The normal rainfall of Roorkee is 1156.4 mm per annum and 86% of the annual rainfall is recorded during southwest monsoon period (June to September). The monthly average maximum temperature of the study area is recorded in the range of 20.4 (January)-39.2°C (May) and monthly average minimum temperature in the range of 6.1(January)-24.9°C (July) and average relative humidity 78%.

The normal annual rainfall of Sagar is 1234.8 mm and about 90% of the annual rainfall takes place during the southwest monsoon period (June to September). January is the coldest months with the temperature falling as low as 11.6°C and maximum up to 24.5°C. During the month of May, temperature may go up to 40.7°C (maximum).

The condensed air moisture samples for isotopic analyses were collected on daily basis at Roorkee, Uttarakhand and Sagar, Madhya Pradesh by condensation method [9]. In this method, the air moisture sample is collected using the conical condensation device (Figure 2). The samples are collected at same time at both the stations and the date, time, temperature and relative humidity are recorded using thermohygrometer [9]. Data concerning daily meteorological variables, including surface air temperature (minimum temperature, maximum temperature and mean temperature) and relative humidity was also recorded at both the stations. The moisture influx increases by 69% at Roorkee and 61% at Sagar with the onset of monsoon and reaches to approximately 24 g/m3 at Roorkee and 22 g/m3 at Sagar in the month of July and continues till September and thereafter reduces to approximately 10 g/m3 at Roorkee and 9 g/m3 at Sagar during winters. This seasonal change of moisture cycle continues annually with the time spectrum. The absolute humidity increases during the monsoon season at both the places. The difference between the moisture content between the winter and monsoon is the about 58% at Roorkee and Sagar of total influx. This corresponds to the total influx of 14g/m3 of moisture due to SW monsoon.

The rainfall ranged from 0.31 to 660.3 mm at Roorkee with 92% occurring during monsoon (June to September) and at Sagar it ranged from 6.04 to 497.3 mm with 93% occurring during June to October. As evident from Figure 4 that during monsoon period, the absolute humidity also found to increase by approximately 42% at Roorkee and 22% at Sagar as compared to the winter months (December-January). In order to identify the source component of the air moisture, atmospheric vapours were analysed for stable isotopes. Isotopic composition of atmospheric water vapors collected on daily basis at sites Roorkee and Sagar, which are located a few hundred kilometers away (677 km aerial distance) along the monsoon track, are compared. The two isotopic spectra grossly correlate at most part of the spectrum. This clearly indicates that although rainout process take place locally, its effect on the atmospheric water vapors can be observed over long distances and this opens up possibility of monsoon prediction through monitoring of atmospheric water vapour.

The isotopic composition of air moisture with time spectrum for the period 2008-10 indicates troughs during monsoon period and crests during the remaining season (Figure 5). The periods of influx of moisture during monsoon period (June to September) is associated with depleted isotopic composition of vapour at both the stations and the average depletion of approximately 87% in δ18O & 146% in δD at Roorkee and approximately 323% in δ18O and 241% in δD at Sagar is found. The more depletion in the isotopic values of Sagar is due to the highly enriched isotopic values (δ18O=0.74‰; δD=-2.91‰) of atmospheric vapour originating from recycling of the vapour from local sources during April. As the monsoon advances, the associated isotopically depleted moisture moves along with it. Ultimately, with the withdrawal of monsoon from the Indian sub-continent the isotopically depleted vapour also gets withdrawn from the sub-continent. In the post monsoon, the evaporation of precipitated vapour from the moist surface leads to progressive enrichment till the onset of next monsoon or regional influx of moist air through Western Disturbances etc.

The concentration of these vapours increases in the atmosphere till the onset of next monsoon. The period between the end of monsoon to onset of the next monsoon indicated by the width of the crests. The intense monsoon is indicated by steep and longer width troughs. The troughs in isotopic trends appear almost at same time at both the stations (Figures 5 and 6). The dates of onset and withdrawal of monsoon at Roorkee and Sagar during 2008-10 is shown in Figure 7.

Figure 7: Dates of (a) monsoon onset and (b) withdrawal at Roorkee and Sagar during 2008-10 (source:http://www.imd.gov.in/section/nhac/dynamic/Monsoon_ frame.htm).

The atmospheric water vapours received during SW monsoon period are always depleted as compared to the vapours received during non-monsoon period. The extent of depletion in isotopic composition of moisture and period over this depletion continues is directly linked with monsoon strength (intensity, episodes and duration), therefore, isotopes may be used to track movement of monsoon vapours and regional influx of moist vapour. The present observations taken for a period from 2008 to 2010 indicate increasing monsoon strength in the Roorkee, the reason for which requires further investigations.

The work was carried out under the project “National Programme on Isotope Fingerprinting of Waters of India” and authors are thankful to DST-SERC (Funded by DST vide IR/54/ESF/05-2004 dated July17, 2007) for sponsoring the study. Authors thank the Director, National Institute of Hydrology for his support and encouragement.

Copyright: © 2013 Krishan G, et al. This is an open-access article distributed under the terms of the Creative Commons Attribution License, which permits unrestricted use, distribution, and reproduction in any medium, provided the original author and source are credited.
Top