The synovial plica of the knee joint is considered as a remnant of the septum which existed in the patellofemoral joint during fetal life [1].

Medial suprapatellar synovial plica is known as a ‘shelf ’ [1-3]. “Shelf ” refers to the medial alar fold extending and ascending the medial joint wall towards the suprapatellar synovial plica, showing a shelf-like appearance [1-3]. It is arthroscopically classified into 4 types [4] and was noted in 50% to 70% of Japanese and 20% to 45% of Americans and Europeans [3,5-8]. Syndrome from a pathological medial patella plica is called as Shelf syndrome. Shelf syndrome occurs when the shelf impinges into the patellofemoral joint or is extended from the medial femoral condyle secondary to pressure. Impingement of the shelf is not necessarily diagnosed as shelf syndrome and consideration of the differential diagnoses is required [9].

Pain is the primary complaint in the medial patella. The pain is increased with repetitive activities, such as running, jumping or ascending and descending of stairs. The pathophysiology of the plica syndrome is not clearly defined. Generally when there is inflammation associated with edema and thickening, the plica can become relatively inelastic and symptomatic as it impinges into patellafemoral joint. This phenomenon causes secondary mechanical synovitis and erosion about the margins of the condyle.

The diagnosis of plica syndrome can be made from the history alone and is supported by the physical examination. In some cases, plicae are seen clearly on MR imaging. However, MR imaging does not show the presence of a plica in all cases.

It occurs mainly in younger persons (particularly athletes) and rarely in the elderly.

We report three elderly patients with a medial synovial plica causing severe pain and locked knees. Impingement of the shelf is not necessarily a shelf syndrome, but should be considered in the differential diagnosis if there is pain. Our patients had no symptoms in their early or middle life, but developed severe pain and a locked knee when they were elderly [10]. The difference between shelf syndrome in elderly patients and that in younger patients is that the former involves osteospur formation, which is a degenerative change in the patellofemoral joint, and degeneration and tearing of the shelf margin. In their early or middle life, they have had the plica in their knee joint and no symptom (Figures 1 and 2). 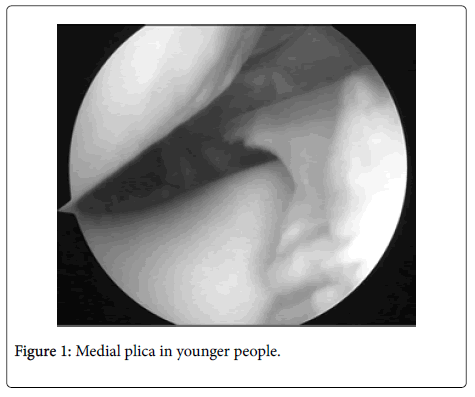 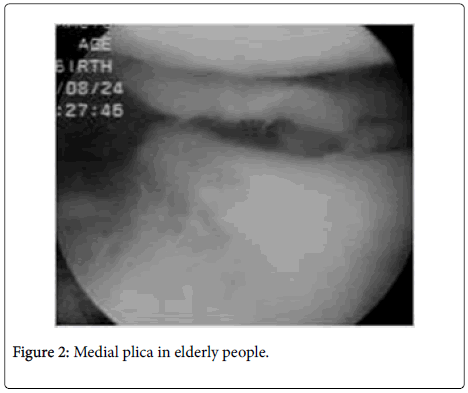 With increase of the age, Osteospur and degenerative cartilage around the plica appear and cause the symptom.

The diagnosis of shelf syndrome in elderly patients is so difficult. Because elder patients have degenerative changes in their menisci and cartilage. Indeed we considered our patients’ symptom was caused by meniscal injury or osteoarthritis.

As for the pathogenic mechanism, the possible causes of shelf syndrome in younger patients are decreased flexibility and retractility of the shelf, the attachment of the infrapatellar fat pad, and enhanced irritability of the joint capsule. In elderly patients, the severe pain and locked knee are caused by a torn shelf (which is initially asymptomatic and categorised as type-C) and leads to decreased retractility owing to degeneration or transformation into a type-D shelf secondary to osteospur formation causing impingement.

Although shelf syndrome is rare in elderly people, it should be suspected whenever severe pain and a locked knee are present.

Copyright: © 2016 Mine T. This is an open-access article distributed under the terms of the Creative Commons Attribution License, which permits unrestricted use, distribution, and reproduction in any medium, provided the original author and source are credited.
Top