A 56-yearold man was bitten in his right hand by a free running Belgian Shepherd dog while training for a marathon. His wife, a nurse, disinfected the wound immediately with hydrogen peroxide. Initially, the patient was feeling well. Three days later, he was seen by his general practitioner because of general indisposition. After receiving the laboratory results, revealing a severe infection, the patient was immediately admitted to hospital. After admission to hospital the patient developed fever, muscle pain and nausea without vomiting. Dyspnoea occurred and an early antibiotic therapy with ceftriaxone and metronidazole was administered. Five days after the dog bite, the patient was transferred to Cardiac Intensive Care Unit (CICU) of the University Hospital of Heidelberg because of acute cardiac decompensating with suspicion of endocarditis of the mitral valve and acute kidney and liver failure.

On admission to CICU, the actual medical condition as well as the past medical history, social history and behavioural history were evaluated. The patient was fully examined. Several clinical tests were performed during the course of his intensive care treatment: Extensive laboratory (clinical chemistry, haematology and clotting including ROTEM® analysis), several blood cultures, 12 lead electrocardiogram (ECG) and chest X-rays. In addition, he received transthoracic and transoesophageal echocardiography for suspicion of endocarditis of the mitral valve, abdominal sonography because of acute renal and liver failure, vascular doppler studies to clarify peripheral perfusion, magnet resonance imaging (MRI) of the left hand and computer tomography (CT) of the abdomen and pelvis for exclusion of infectious focus.

On presentation, the patient reported discrete arterial hypertension, no other former diseases, no allergies, no previous medication. He worked as a warehouse logistic. No specific family diseases were known. Occasionally he was drinking small amounts of alcohol. He stopped smoking four years before this admission (40 pack years).

On examination, he was in moderate distress, reduced general but good nutritional condition. Temperature was 36.3°C, blood pressure 120/80 mmHg, pulse 77 beats per minute, respiratory rate 28 breaths per minute and oxygen saturation 98% using 8 l oxygen with face masc. Heart sounds were normal. There was vesicular breathing, no crackling sounds. Abdomen was soft and not distended, with normal bowel sounds and without guarding or rebound. Liver and spleen were not palpable. No peripheral oedemas were found. Plan punctual wounds and diffuse, purple, blanching livedo extended over his legs and feet (Figure 1). Some skin mottling occurred on his thorax. 12 lead ECG showed sinus rhythm at a rate of 77 beats per minute, PQ 206 ms, QRS 85 ms, QTc 373 ms, atrioventricular block I°, no ST segment elevation, no signs of ischemia. 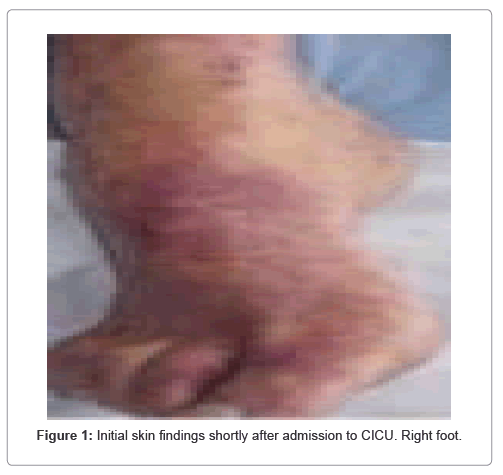 Over the course of a few hours, the patient’s condition rapidly deteriorated and displayed a clinically septic picture with multiple organ failure. The day after admission the antibiotic therapy was escalated to clindamycin and imipeneme. X-ray of the chest showed slight opacities, no significant pulmonal venous congestion, as well as minimal pleural effusion on the left side and basal atelectasis on both sides (Figure 2). There was no evidence of pneumonia or pneumothorax. A vascath was correctly inserted with projection on cavoatrial transition. 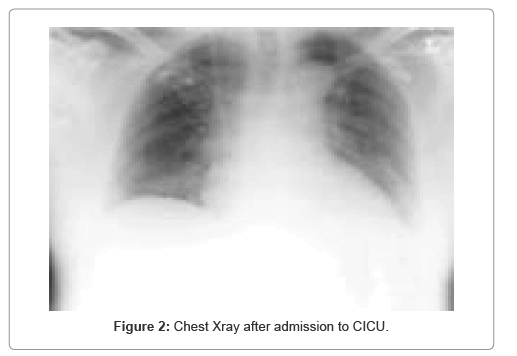 Initial transthoracic echocardiography revealed a global moderately impaired left ventricular (LV) function with hyperkinesia of all wall segments (ejection fraction 40%) and a moderately impaired right ventricular function. Vena cava inferior was full with limited variability. Left and right atrium and right ventricle were dilated. There was no pericardial effusion. However, a filamentous, echogenic, floating structure (1 cm) at the chorda of the anterior mitral lealflet (AML) was detected (differential diagnosis little vegetation or thickened chorda). The mitral valve was thickened with small mitral regurgitation. The systolic pulmonary arterial pressure was slightly elevated (35 mmHg). In subsequent transoesophageal echocardiography no intracardial thrombus was detected. No vegetations were displayed. Aorta ascendens, arch and descendens were inconspicuous.

The exanthema was a blanching, diffuse but symmetric purple livedo with ecchymosis and progressed to involve thorax and abdomen, arms and parts of the face but with strong focus on legs and feet. Initially, there were multiple scratch marks on the body. Mucous membranes in the mouth appeared increasingly dark. However, no bullae, target lesions, crepitus or exudate occurred. Livid discolouration of both feet with strongest pain was interpreted as septic micro embolisms. Doppler imaging of lower extremities arteries showed a strong three vessel supply with a triphasic flow. On upper extremities, tri-and biphasic flow was displayed. In total no evidence of macrovascular circulatory disorder could be detected. Diagnostic findings were compatible with septic micro embolism. The patient was treated with prostacyclin and intravenous low dose heparin by continuous infusion. Metamizole and oxycodon as well as sumatriptan were administered because of increasing pain. Omeprazole was given for ulcus prophylaxis.

MRI of the left hand was performed and revealed oedema of the soft parts of the musculature and fat tissue but gave no evidence for phlegmon, necrotizing fasciitis, or involvement of tendon sheaths, involvement of bone marrow, or any abscess. Accidentally, a ganglion cyst of the Os Scaphoideum was diagnosed.

Abdominal ultrasound showed mild enlargement of the liver (craniocaudal 16 cm), but homogenous parenchyma, no cholestasis, no thrombosis of liver vein, but little surrounding fluid. The spleen appeared normal. There was no larger pleural effusion. No urinary stasis was detected, but there was a reduced renal perfusion. Urine analysis showed eumorph micro haematuria. Rapidly, anuria with hyperkalemia occurred. After initial conservative treatment with furosemide as continuous infusion, intermitting venovenous haemodialysis was required few hours after admission and subsequently daily for 24 days.

CT scan of abdomen and pelvis with intravenous administration of contrast agent confirmed reduced renal perfusion and reduced medulla-cortex differentiation. There was a reduced contrast in spleen. All abdominal vessels were open up to segmental arteries and there was no focal infarction of organs.

In the sets of blood culture performed before administration of antibiotics the diagnosis of sepsis due to Capnocytophaga canimorsus was confirmed.

Therapy continued with antibiotics and prostacyclin as well as intravenous low dose heparin for four weeks after admission. Due to the fulminant DIC, ROTEM® analysis and substitution of platelets and fresh frozen plasma were necessary. Discrete improvement of perfusion in lower extremities was achieved. Markers of infection were decreasing. Echocardiography during the course of treatment at CICU reported an improving LV function. Frequent evaluation of vascular surgery service found no urgent indication for amputation, a daily wound dressing with cutimed sorbact, prophylaxis of talipes equinus and physiotherapy were performed. An improvement of wounds especially at dorsum was achieved. However, three weeks after admission necrotic wounds on both feet occurred, but toe movement was still possible. At left heel a superficial ulceration was diagnosed. Pulses of A. tibialis posterior and A. dorsalis pedis were still palpable on both feet. After exploration of the feet by the plastic surgery department, a primarily conservative therapy in order to preserve as much tissue as possible and finally an amputation with plastic cover was planned. Moreover, with continuous furosemide infusion diuresis and renal function were improving. Three weeks after the dog bite no more haemodialysis was necessary (Figure 3) and liver parameters normalized. To achieve further renal re-compensation, the patient was discharged to the Department of Nephrology four weeks after admission. 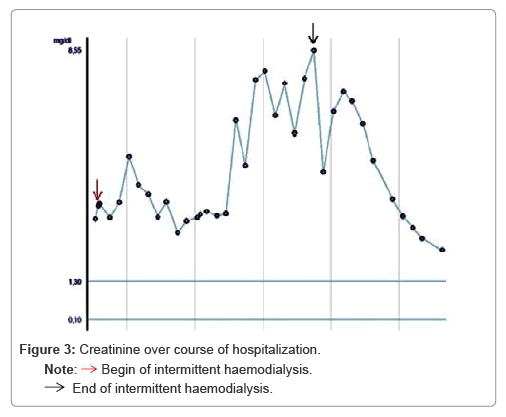 Figure 3: Creatinine over course of hospitalization.

The patient was finally discharged home from hospital in a clinically stable condition and with declining CRP as well as further improving renal function 41 days after dog bite and five weeks after hospital admission. Antibiotic therapy with clindamycin was continued orally. Low molecular heparin was administered once daily s.c. for thrombosis prophylaxis. Subsequently, an amputation of both lower limbs at the plastic surgery centre three weeks after discharge, followed by rehabilitation, was scheduled.

A severe systemic infection of the patient was assumed at hospital admission. As a similar case with sepsis after dog bite with evidence for Capnocytophaga canimorsus was treated formerly at CICU, one day after admission cardiologist, nephrologist and microbiologist performed an interdisciplinary evaluation with careful anamnesis and suspected sepsis due to Capnocytophaga canimorsus as the most likely diagnosis [1-3]. Therefore, antibiotic therapy was switched to clindamycin and imipeneme the day after admission [4]. Nevertheless, blood cultures at CICU were all negative and intensive care therapy of sepsis, acute kidney failure, coagulopathy and pain was conducted without distinct diagnosis. Finally, information of the external hospital was obtained: In the sets of blood cultures that were performed before the administration of antibiotics the diagnosis of sepsis due to Capnocytophaga canimorsus was confirmed.

In the subsequent therapy, interdisciplinary intensive care treatment continued, also involving vascular and plastic surgery departments. It can be reasoned that early escalation of antibiotic therapy advantageously influenced septic progression. In addition, fulminant DIC, monitored by ROTEM®, was treated by consequent administration of platelets and fresh frozen plasma. Due to septic micro embolisms, an administration of prostacyclin and intravenous low dose heparin by continuous infusion were essential, too. Fortunately, a clinical stable condition was achieved and the patient could even be discharged home before re-admission in the plastic surgery department for subsequent double-sided lower limb amputation. Based on our duplex evaluation a macrovascular disease like peripheral artery disease (PAD) could be excluded. In fact, this case of both sided lower limb amputation due to septic ischemia caused by Capnocytophaga canimorsus is the first case described in literature.

For clinicians, it is important to be aware of this rare but potentially lethal disease Capnocytophaga canimorsus as a commensal bacterium of dogs and cats saliva is associated with a lethality rate of 30% [5]. In case of any patient presenting with general symptoms after a dog bite, calculated antibiotic therapy should be started early after obtaining blood cultures (e.g. penicillin G or amoxicillin/clavulanic acid) [6,7]. Because of the possible occurrence of a fulminant DIC, a close monitoring of coagulation (e.g. ROTEM® analysis) is necessary. Moreover, a close interdisciplinary collaboration is essential and even after clinical stabilization and successful therapy, possible late complications have to be kept in mind.

To draw a conclusion, after dog bite a sepsis due to Capnocytophaga canimorsus has to be considered as differential diagnosis even in immune competent individuals and microbiological diagnostic should be started immediately after hospital admission.

The results presented in this paper have not been published previously in whole or part.

Copyright: © 2018 Grossekettler L, et al. This is an open-access article distributed under the terms of the Creative Commons Attribution License, which permits unrestricted use, distribution, and reproduction in any medium, provided the original author and source are credited.