An intensive field investigation on the application of sediment budget analysis for sustainable shoreline protection and management was carried out at the updrift and downdrift shoreline adjoining Qua-Iboe River estuary, south-east coast of Nigeria. The study employed variations in beach volumes within a 500m-littoral cell of sediment compartment, based on daily beach profile surveys, measured over a neap-spring tidal cycle at the shoreline, as the fundamental tool for the analysis. A comparative analysis of the results of short- term beach profile morphologic changes at the shoreline depicted the updrift beach as the sediment source and the downdrift counterpart as the sink. A sediment budget deficit of 1498 m3 per day with an annual sediment budget of 546770 m3 estimated for beach nourishment, due to erosion traced to storm surge incident at the shoreline in 2011, and was recorded at the updrift beach. However, result of the downdrift shoreline which revealed a budget surplus of 11190 m3 per day with an annual budget estimate of 4084350m3 was attributed to massive deposit of sediment at the beach. The estimated volumes of sediment in this report were calculated based on a new sediment budget equation: -[( [ ΣA(1,2,…)]/n –[ ΣE(1,2,…) ]/n) - (Rv x L)]t=Residual. One of the benefits of the new equation is the inclusion of sustainability factor (Rv x L) for efficient and sustainable shoreline protection and management.

Sediment budget is a veritable tool in engineering design of shoreline protection and sustainable management of shoreline. It enhances and enables analysis, description, and comprehension of different sediment inputs (sources), outputs (sinks), transport pathways and magnitude along the coasts [1,2]. The knowledge and understanding of sediment budget analysis is essential to sustainable management of shoreline erosion especially along Nigeria coastline which is under the threats of retreat due to sea level rise and climate change. It is also used to predict morphological change in any particular coastline over time [1,2]. It provides a basis for evaluation of shoreline morphologic changes depending on the degree of balance between erosion and accretion within a littoral cell [3,4]. The difference between the sediment sources and sinks in each cell, for the entire budget, must equal the rate of change in volume occurring within that region [5-7]. The boundary of sediment budgets is determined by the establishment of calculation or littoral cells which are sometimes defined by geologic features or coastal structures and as well by hydrodynamic characteristics of the area [5,8]. However, Rosati et al. [1,2] equation, among others, was found useful to this investigation which is expressed as follows:

All the terms are expressed consistently as volume or as a volumetric change rate. “Qsource and Qsink are the sources and sinks to the control volume, respectively; ΔV is the net change in volume within the cell; and P and R are the amounts (volume or volume rate) of material placed in and removed from the cell respectively. The Residual represents the degree to which the cell is balanced [2]. This paper is developed from the research findings of my Master of Science Degree Dissertation, Institute of Natural Resources, Environment and sustainable Development, University of Port Harcourt. It is aimed at analyzing sediment budget in relation to shoreline offset development and its management implications in the coastal zone.

Tropical sandy shoreline adjoining Qua-Iboe River estuary is located in Ibeno Local Government Area of Akwa Ibom State, South- East coast of Nigeria. The specific study sites are the eastern Ibeno and western (Okorutip) ocean shoreline adjoining the estuary (Figure 1). The shoreline is exposed to semi-diurnal tides with tidal range of 2-4 m and south westerly waves with amplitude less than 20 cm associated with south-westerly wind conditions which vary annually from calm (November-February) through transitional (February-April) and storm ( May-October) [9]. Modal wave period close to the shore are 8-12 s [10]. Current pattern in the estuary is ebb dominated. Maximum flood and ebb velocities are in the range of 22-33 cm/s (north) and 113-160cm/s(south) respectively. Long-shore current velocities along the ocean shoreline ranged 50-125 cm/s east with periodic reversals to the west at the downdrift beach contiguous to the estuary mouth due to changes in tidal stage [11] The shoreline represents an exposed section of the abandoned beach ridges laterally bounded by mangrove swamps of the lower Deltaic plain of Holocene age. It is underlain by Sombreiro- Warri Deltaic Plain sand of late Pleistocene [12] and Sheet-84 of 1962 [13]. The beach is texturally homogeneous with predominantly well to very well sort much fined grained sand [14]. The study covered a period of nine days from September 28, to October 6, 2013. The area was divided into updrift and downdrift shoreline morphologic compartments adjoined to Qua-Iboe estuary respectively (Figure 2). Littoral cell was demarcated along the beach at 500 m away from the estuary mouth at both updrift and downdrift compartments of the ocean shoreline. Six monitoring stations for hydrodynamic processes were established and geo-referenced with GPS: one station, each at the either sides of the estuarine shoreline at 100m away from the estuary mouth; and two stations, each at 200 m and 500 m locations along the downdrift and updrift ocean shoreline from the estuary mouth respectively (Figure 1). At each monitoring station along the ocean shoreline, five geomorphic beach segments were delineated thus: backshore, berm, and upper, mid- and lower foreshore. Beach profiles were made at each station daily over a neapspring tidal phase. Linear beach profile measurements were converted to beach volumetric change within a one-metre wide transect. The beach sedimentation patterns are considered below under updrift and downdrift volumetric change, shoreline morphology and orientation.

i. At station 1 which was closer to the estuary, the net sedimentation pattern fluctuated between 0.72 m3 and -9.6 m3, and the net volumetric change between neap and spring tide was -8.88 m3 (Figure 3). 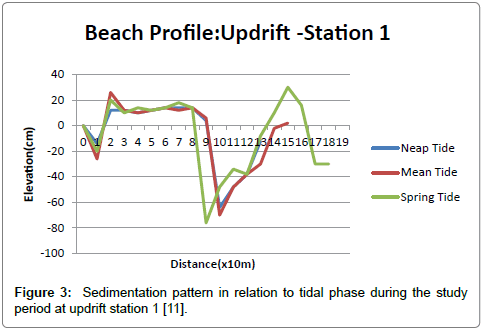 Figure 3: Sedimentation pattern in relation to tidal phase during the study period at updrift station 1 [11].

ii. The beach sedimentation values at station 2 away from the estuary computed between neap and spring tide were 4.2 m3 and -0.3 m3. A net value of 3.9 m3 was recorded (Figure 4). 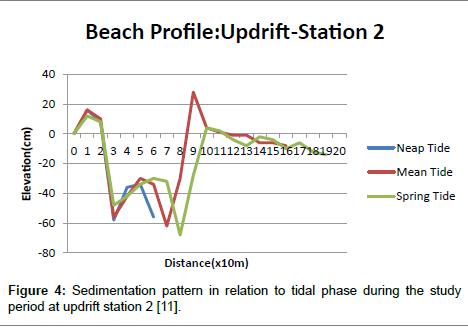 Figure 4: Sedimentation pattern in relation to tidal phase during the study period at updrift station 2 [11].

i. The sedimentation pattern at station 1 fluctuated between 39m3 and -8.28 m3. A net volumetric change of 21.72 m3 was recorded between neap and spring tide (Figure 5). 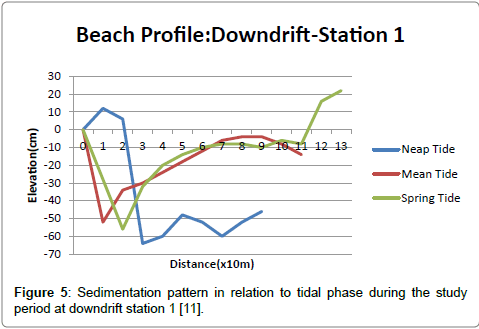 Figure 5: Sedimentation pattern in relation to tidal phase during the study period at downdrift station 1 [11].

ii. Station 2 was characterized by accretion as indicated by sedimentation values of 30 m3 and -10 m3. A net beach volumetric change of 20 m3 was recorded (Figure 6). 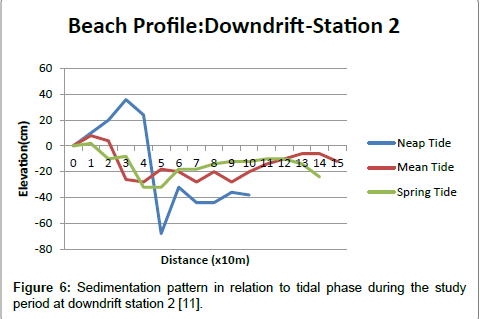 Figure 6: Sedimentation pattern in relation to tidal phase during the study period at downdrift station 2 [11].

• In considering the two stations, the total volumetric change of 40.72 m3 was recorded at the downdrift shoreline stations which indicate sediment accretion.

The quantitative estimate of sediment gains and losses at the littoral cells (Figure 2) and compartments can be determined using sediment base analysis system equation which runs on Windows 95,98 and NT platform [1].

Where ΣQsource - represents accretion and ΣQsink - represents erosion, Rv- stands for the rate of volumetric change, L- represents the length of littoral cell while t- represents the budget period. The preceding negative sign is a factor which determines the quantity of sediment that can be removed from or placed into the littoral cell. But Rv x L in equation (8) is the sustainability factor which is denoted as Qs. In a sediment budget deficit, the factor- Qs provides a measurable volume of sediment required as a control to the actual sediment volume needed for beach nourishment within a littoral cell. Whereas, in a budget surplus, Qs provides a maximum volume of sediment which can be removed from a littoral cell without upsetting the natural potential of the beach to regain it morpho-dynamic balance in favour of accretion. Therefore equation (8) can equally be written as:

Moreover, equation ( 9) can be further expanded as it is applied in this budget analysis thus:

The rate of volumetric change per day (Rv) is given as:

Therefore, the rate of volumetric change (Rv) per 1m transect (sublittoral cell) at the beach per day =-0.356 m3/day

Hence, the rate of volumetric change within 500m littoral cell (L) is given as:

ΣQsink for 500 m littoral cell per day is given as:

ΣQsource for 500m littoral cell is given as:

Therefore sediment budget estimate for sediment supply to offset the rate of erosion at the littoral cell per a year is given as:

The rate of volumetric change per day(Rv) is given as:

Where: n=number of days

Therefore, the rate of volumetric change (Rv) per 1m transect (sublittoral cell) at the beach per day = 2.98 m3/day

Hence, the rate of volumetric change within 500 m littoral cell (L) is given as:

ΣQsink for 500m littoral cell per day is given as:

ΣQsource for 500 m littoral cell is given as:

The volume of sediment which can be removed from the beach without erosion per day is 11190 m3 .

Hence, the volume of sediment which can be removed from the littoral cell for a year is 4084350 m3.

It is therefore instructive by the above analysis that the updrift shoreline is threatened by severe erosion and would require much fund to design and establish a control system unlike the downdrift counterpart which has a sediment budget surplus.

The knowledge of sediment budget analysis was noted as an indispensable tool for a successful design and implementation of coastal defence structure and management. It was also found, despite the uncertainties associated with field measurements, as a dependable source of information in decision making for shoreline protection and management by coastal zone managers and coastal engineers. Besides, the new sediment budget equation was easy and simple to work with using beach profile data.

Copyright: © 2014 Udo-Akuaibit SP. This is an open-access article distributed under the terms of the Creative Commons Attribution License, which permits unrestricted use, distribution, and reproduction in any medium, provided the original author and source are credited.
Top