Regenerative Surgery in the Management of the Leg Ulcers

Regenerative Surgery in the Management of the Leg Ulcers

The causes of non-healing leg ulcers are multi-factorial, and include both systemic and local factors. The beginning of advanced dressings or the negative pressure wound therapy and compression therapy, certainly improved clinical outcomes. In this paper, we showed the efficacy of autologous micro-grafts to improve wound healing of leg ulcers of different etiology. These micro-grafts are obtained through a disposable medical device and are constituted by viable progenitor cells and growth factors deriving from autologous tissue which was disaggregated. A total of 7 different leg ulcers from 5 patients were analyzed, and after the treatment with autologous micro-grafts, in all lesions it was observed an enhancement of wound healing process after the first week that lasted up to one month from micro-grafts injection. Furthermore, for all the lesions, the patients reported a pain disappearance. In conclusion, these preliminary results showed that leg ulcers previously treated with routinary approach with no results, when treated with autologous micro-grafts quickly improve their dwound healing in addition to reduction and/or disappearance of pain.

The leg ulcers are a difficult battle-field for the regenerative medicine, due to several and different factors suggested as responsible of “hard to heal” leg ulcers, including the role of biofilms produced by pathogenic bacteria, aging and exhaustion of the tissue reparative capacity [1,2]. From a clinical point of view, the introduction of advanced devices and procedures such as compression therapy, have certainly improved results and increased rates of clinical outcome. On the other hand, scientific studies have emphasized the role of both extracellular matrix (ECM) in the early stages of tissue repair and growth factors involved in the different phases of tissue reparation [3-6]. Also the biomaterials clinical spreading, used to cover large areas of skin, has allowed to focus on the problems of large implantation of autologous skin grafts, consisting essentially of scarring and contraction of the skin resulting in functional impairment [7,8]. Cultured autologous keratinocytes were also proposed as a new treatment, but the long production time and the damages occurring during transfer operations from the production site bring a significant percentage of wound healing complications [9,10]. In addition, the long waiting times before graft implant expose the patient to increasing risk of ulcer infections. In the last years, it has been proposed the use of dermal substitutes by the application of a double-layer structure of collagen and silicone, exerting the role of temporary epidermis and several studies have been reported that a resumption and acceleration of the repair can be enhanced adding topically growth factors, such as those that can be found in the autologous platelet gel [11-13].

In alternative, the use of mesenchymal stem cells (MSCs) has been proposed, on the basis of their multi-lineage differentiation and immunomodulatory properties. In fact, these cells can differentiate into specific-tissue cells to repair a damaged area or exert a therapeutic effect through paracrine actions [14,15]. Recently, it has been developed a new CE-certified medical device called Rigeneracons (Human Brain Wave, Italy) that allows to obtain in a few minutes, in a standard surgery room, autologous micro-grafts of 50 microns mean size in order, claiming to maximize their biological activity minimizing cell death which classically accompanies each graft from donor graft area collection to the grafting into the recipient bed. This disposable device is just a mechanical biological disruptor able to disaggregate small pieces of human connective tissues using a grid provided by hexagonal blades and filtering cells and components of extracellular matrix. This method should allow to enhance the presence of viable and sterile progenitor cells inside the micro-grafts, able to be used for tissue repair, as recently reported in previous works [16-18].

On the basis of these evidences, the aim of this study was to treat seven leg ulcers caused by different factors using the micro-grafts obtained by Rigenera protocol. All these ulcers were previously treated with routinary approach but the therapy failed to reach an optimal outcome for the patients.

Five patients affecting by leg ulcers of different etiology for a total of 7 ulcers were selected and their characteristics are indicated in the Table 1. All patients signed the informed consent. After medical history, a vascular evaluation was performed and in 2 patients affected by vasculitis was also performed a skin biopsy. In all the patients a debridement by ultrasound device was performed to remove the damaged tissue. After this, a small sample of skin was collected in a not-damaged area of the patient by punch of 0.3 mm to generate micrografts (Figure 1A), the epithelium removed and remaining connected tissue inserted into the Rigeneracons device adding 1.5 ml of sterile saline solution. After 2 minutes activation of the device, the suspension composed by autologous micro-grafts was collected (Figure 1B) and injected directly into the side edges of the ulcer (Figure 1C) and used to wet a scaffold of bovine collagen (Figure 1D), which was applied directly on the lesion (Figure 1E) (Figure 1).

We selected 5 patients of different age affecting by different etiological lesion for a total of 7 lesions which were treated with Rigenera protocol, as indicated in the subjects and method section.

Table 1: Characteristics of the patients and type of ulcers treated with Rigenera protocol. Figure 1: Collection and application of autologous micro-grafts on leg ulcers.

At the end of the first procedure, a layer of zinc oxide cream was applied at the edge of the ulcer to prevent the onset of maceration in the periwound skin (Figure 1F). Finally, the lesion was covered by an Aghydrofiber dressing to prevent border infection and a multilayer and multi-composite bandage was applied. The dressing was changed every week for a month. From second dressing change no more zinc oxide was used, because of decreased exudation (Table 1).

For each ulcer, wound area was calculated at day 0 and after 1, 2 and 4 weeks of treatment using a ruler and multiplying the greatest length for the perpendicular greatest width.

A questionnaire and a visual analog scale (VAS) were administered to assess the amount of pain felt after the micro-grafts application. The pain VAS is in fact a self-completed by the respondent which is asked to place a line perpendicular to the VAS line at the point representing its pain intensity. The number indicated by the respondent on the scale is recorded and the scores range from 0-10, where 0 indicates pain absence and 10 a severe pain [16].

In the Figure 2, are reported some representative results of leg ulcers management using Rigenera protocol. After one week, an increase of exudation was observed in 6 lesions at the first dressing change (Figure 2A). No inflammation signs were observed in the skin around the wound. A thick fibrin layer was observed in 4 lesions. At second dressing change, exudation was decreased and a fibrin layer was observed in all ulcers (Figure 2B). Buttons of granulation tissue were also observed after three weeks (Figure 2C), and after four weeks was evidenced a new tissue covered with skin in the area around the lesion (Figure 2D). A similar result was also observed for diabetic ulcer after one month using this innovative approach (Figures 2E and 2F) and also in this case no infection signs were observed (Figure 2). Furthermore, after application of these micro-grafts combined with a bovine collagen, in all 7 lesions was reported a sudden pain disappearance (Figure 3A), while no significant size modifications were observed (Figure 3). 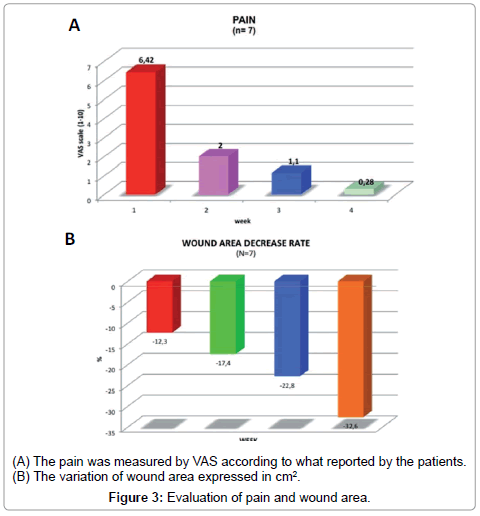 The results of this study showed that autologous micro-grafts obtained by Rigenera protocol were able to jump-start the process of tissue repair as indicated by improving of different not responding leg ulcers, already after one week from micro-grafts injection. In previous studies the same protocol was used to improve the wound healing of postoperative or post traumatic wounds or hypertrophic scars [17-19], as well as in the field of hair transplantation promoting both hair restoration and healing of micro-wounds caused by intervention [20]. In all the 7 cases the patients reported the disappearance of pain within a few hours from the injection, although no analgesic substances were administrated during the follow up. On the other hand, an increasing exudation was observed after the first application, probably related to the granulation effect in the ulcer site of several cells and growth factors deriving from starting tissue used for micro-grafts generation. This event can be explained by recent in vitro studies reporting that tissues disaggregated with Rigenera protocol provide viable micrografts composed of mesenchymal stem cells, known to retain a high regenerative potential [14].

It has been established that eighty percent of chronic wounds localized on lower leg are the result of chronic venous insufficiency, and in 5-10 percent of these has an arterial etiology, whereas the rest are mainly neuropathic ulcers. Chronic wounds significantly decrease the quality of life of the patients and require continuous topical treatment, causing immobility and pain in a high percentage of cases. Furthermore, it has been proved that chronic wounds account for the large proportion of costs in the health care system. Moreover, the management of chronic wounds reaches a total of 2-4 percent of the health budget in western countries [21,22]. In this context, could be extremely useful to investigate and test new clinical approaches in the management of leg ulcers. The medical device described in this study could represent a tool for this purpose, being a biological mechanical disruptor able to produce in a few minutes’ autologous micro-grafts containing viable progenitor cells, which can be easily injected in the lesions alone or combined with biological scaffolds to ameliorate the wound healing process.

Clinical indications for Rigenera protocol were also evidenced in other clinical fields including dentistry where human autologous micrografts, originated from dental pulp, were used for bone regeneration in atrophic maxilla and periodontal tissue generation [23,24].

Taken together, these preliminary results seem to be encouraging for the use of autologous connective micro-grafts in the treatment of leg ulcer, although further experiments and clinical cases should be investigated to better unveil the wound healing mechanisms mediated by this innovative clinical approach.

Copyright: © 2016 Trovato L, et al. This is an open-access article distributed under the terms of the Creative Commons Attribution License, which permits unrestricted use, distribution, and reproduction in any medium, provided the original author and source are credited.
Top