Guar harvesting, besides being a tiring task, involves a number of health hazards. Pods of the guar plant become very hard after drying and prick into the hands of the worker while cutting. The field experiment was conducted on 10 women respondents in CCSHAU farms harvesting guar in the forenoon for one hour with the existing and improved method. In the existing method, the main problems faced while harvesting of guar was irritation (ms=4.0), hands smeared with dust (ms=4.0) and injury in hands (ms=3.5). To overcome the problem, an improved method was used for guar harvesting that consisted of use of safety hand gloves and improved serrated sickle. Three types of safety gloves were tested and the best gloves were further selected for ergonomic evaluation. Effect of gloves in relieving them from hazards revealed that some of the health hazards were completely removed viz cuts in hands, hands smeared with dust and swelling in hands (100%). There was 28.8 percent reduction in RPE while cutting guar using improved sickle with gloves. Improved methods resulted in a decrease in musculoskeletal problems. Maximum reduction in pain was observed in the palm with a combination of an improved sickle with gloves (40.5) followed by in fingers (35.9%). Overall discomfort score was 9.2 which reduced to 6.7 with safety gloves. And, it also increased the area covered (3.0%). Therefore, propagation of appropriate technology is the need of the hour as preventive measures which would be helpful in reducing the drudgery and increasing the efficiency.

Cluster bean, popularly known as guar, is a multipurpose arid leguminous crop grown for seed, green fodder, vegetable and green manuring in dry habitats of Haryana. It has also attained a status of commercial crop as its seeds are used as high quality animal feed. Traditionally, uses of guar include human consumption, cattle feed, religious practices and soil improvement. Besides, it also has medicinal importance viz. plant leaves help in curing night blindness, guar seeds act as a chemotherapeutic agent against small box, boiled guar seeds act as poultice for enlarged liver and swelling due to broken bones. Despite the fact that guar has high medicinal value, but its harvesting involves a number of health hazards. Hence, cutting of guar is a cumbersome task that calls for the increased drudgery of the user and reduced work efficiency.

In Haryana, harvesting of guar (Cluster beans) is generally done manually by men and women both, when the crop is more or less dried. Usually the cutting of guar is done by grasping 3-4 stems of guar plants from the bottom with left hand and right hand is used for cutting the bunch applying sufficient force. The plants as well as the pods of the guar are quite hard that generally prick into the user’s left hand causing injury and pain. Simultaneously, the right hand also gets severely tired by applying number of strokes using existing sickle for cutting this bunch of stems. Moreover, the dust collected on the plants sticks to their hands that worsen the effect. They get itching in their whole body particularly the hands that make the worker much uncomfortable especially as the day temperature rises. Although these work related hazards are ignored by the users, yet consistently affect their health as well as efficiency. But they keep on doing the activity using some local alternatives techniques to cover their hands which, no doubt, protect them partially but affect their work output to a greater extent.

Hence, there is a need to have the appropriate protection measures in the form of improved tools to perform this activity. Safety hand gloves can be an alternate technology, to protect them from work related health hazards in cutting of guar. Moreover, the existing sickle is also not work-efficient which if replaced with improved serrated sickle, could enhance the safety and efficiency of the worker.

Therefore, in light of the above, a study was conducted to assess the occupational health hazards of farm women in guar harvesting and impact of the protection measures with the following objectives:

To assess the occupational health hazards of farm women in guar harvesting and preventive measures used.

To determine the physiological and biomechanical stress of farm women in guar harvesting.

To evaluate the effectiveness/impact of improved tools in harvesting of guar.

The field experiment was conducted on 10 women respondents in CCSHAU farms harvesting guar in the forenoon for one hour with existing and improved method. Improved method consisted of use of safety hand gloves and improved serrated sickle. The protective gloves are made of hosiery fabric of cotton/blend, rubber, rexene and with combination of materials (Figure 1). Following parameters were studied for conducting the experiment. Under this section, problems in various body parts were studied and also various indigenous protective measures used were listed and effect of measures on output of the activity was calculated.

Heart rate is an indicator of cardiac stress due to physical workload. HR was recorded using polar heart rate monitor. From the average value of HR, energy expenditure, total cardiac cost of work (TCCW) and physiological cost of work (PCW) was calculated with the help of formulae as given below:-

Grip dynamometer was used to measure grip strength at rest (Sr) and after the work (Sw) separately for both the hands. Grip fatigue was calculated as under:

Musculo- skeletal discomfort: A human body map was used to identify incidences of musculo-skeletal problems in different parts of the body [1] on a five point scale ranging from very severe pain (5) to very mild pain (1).

Table 1: Physical characteristics of the respondents.

Physical characteristics in Table 1 depicted that mean age of the women was 35 years having height and weight of about 156 cm and 45 kg, respectively with Pulse rate of 78 bpm. Regarding blood pressure, mean pressure derived from systolic and diastolic blood pressure was 84.3 mm HG which was lower than the normal values. Aerobic capacity was found to be 30.5 ml/kg min exhibiting that respondents were having high average health. Body mass index was observed as 18.5 falling in the category of low weight normal. Cent percent respondents had ectomorph type of body showing thin and lean body. Regarding physical fitness index, two-fifth of the respondents were having high average and good physical fitness (40.0%, each) followed by average physical fitness (20%).

Main problems faced by women while harvesting of guar were irritation (ms=4.0), hands smeared with dust (ms=4.0), injury in hands (ms=3.5). The other problems were rashes (ms=1.9) and insect bite. These problems were mainly due to spikes of the dried guar and dust covered on the plant. The workers are affected through direct dermal contact with guar plants during harvesting. Irritation in the body, headache, injury and swelling in hands and fatigue characterises it. They want to get rid of this situation as soon as possible. These symptoms are self-limited and relieved without medication. However, they take some indigenous preventive measures to protect themselves from these problems. They use full-sleeved shirt to avoid the direct contact with their body. At the end of the day after reaching home they apply mustard oil on their whole body and take bath to avoid irritation. This soothes their body to some extent but not up to the satisfactory level (Table 2).

Moreover, one half of the respondents (5) try to cover their hands also to protect themselves from these problems. Out of which, respondents were using small bag made out of old trousers’ leg (2), muslin cloth (2) and old socks (1) in left hand. This is because they mainly get their left hand injured while grasping dried plants together before cutting them. One was using muslin cloth bag in right hand also. After using indigenous preventive techniques, area covered was reduced (1.3%). It may be due to reason that grip strength was reduced using the loosely fitted and inappropriate hand cover, consequently affecting their output and efficiency. At the end of the day after reaching home they also apply mustard oil on their whole body and take bath to avoid irritation. This soothes their body to some extent but not up to the satisfactory level. It reveals that the preventive measures taken at their level were not sufficient to give them enough protection (Table 3).

Hence, efforts were made to give them appropriate technology to protect the workers from these health hazards and discomfort. For the purpose, three types of gloves viz cotton hosiery, synthetic rubber and PVC with hosiery cotton blend on the other side were given in the field for trial and evaluation. After use their observations revealed that cotton hosiery as well as rubber gloves were not found suitable for guar cutting. Cotton hosiery gloves got entangled into spikes of plant creating hindrance in cutting and rubber gloves were torn from inside of the palm leading to entering of plant dust into the hands. Both of these gloves were not comfortable to use because of perspiration. After use of PVC gloves with hosiery cotton blend smearing of plant dust on hands, irritation, injury and swelling in hands, and rashes were prevented. Moreover, one side of the glove is made of material which has air permeability to avoid the hands from sweating. The gloves are useful in harvesting of above crops as they protect the hands of the worker from getting any work related hazards. Hence PVC gloves were taken for further feasibility study.

After identifying the best safety gloves, there was need to use the improved sickle which is helpful in reducing the grip fatigue of right hand and increasing the efficiency. Hence combination of PVC gloves with improved sickle was finally selected as the preventive measures.

The changes in these problems were observed with the use of gloves. As sickle expedite the cutting of guar but did not relieve them of health hazards. With the use of safety gloves, some of the health hazards were completely removed viz cuts in hands, hand smeared with dust and swelling in hands (100%). The other problems that reduced to some extent were irritation (50.0%), rashes (29.6%), numbness (25.0%) and insect bite (9.0%) (Figure 2).

Physiological parameters: Average working heart rate in existing method was 118 bpm which reduced to 116 bpm and 114 bpm with the use of safety gloves and safety gloves with improved sickle both respectively (Table 4). Maximum reduction in average working heart rate was found with the combination of improved sickle with gloves (3.4%) (Figure 3). Similarly energy expenditure was 10 kj/min in existing condition which reduced to 9.7 kj/min and 9.4 kg/min, respectively with all above said technologies. 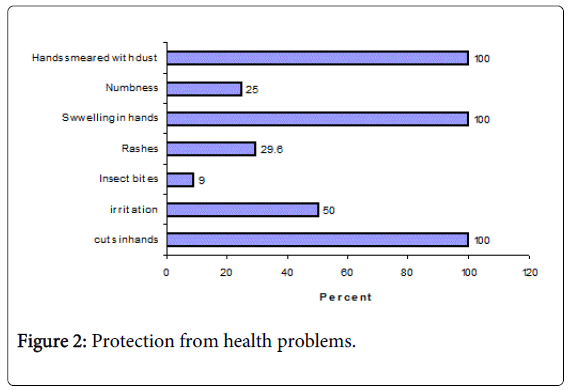 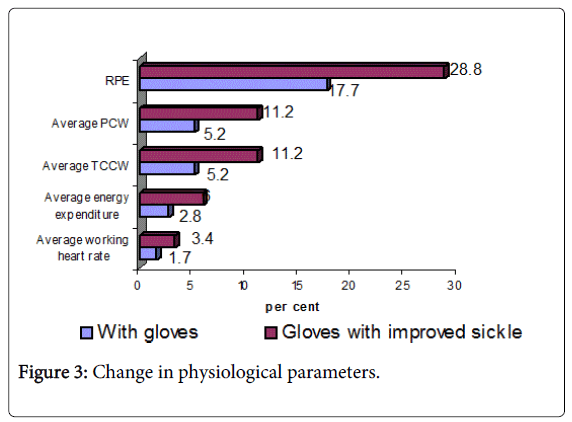 With safety gloves reduction was 5.2 per cent. Average RPE in existing method was 4.5 which reduced to 3.7 and 3.2 with gloves and gloves with sickle respectively. There was 28.8 per cent reduction in RPE while cutting guar using improved sickle with gloves.

Table 5: Grip Strength of the respondents and change in grip strength with improved methods.

Mean age of woman was 35 years having height and weight about 156 cm and 45 kg respectively. Aerobic capacity was 30.5 ml/kg min exhibiting high average physical health of the respondents. Main health hazards during harvesting guar were hands smeared with dust (ms=4.0), irritation (ms=4.0) and cuts in hands (3.5). Average working heart rate and energy expenditure in guar cutting was 118 bpm and 10 kj/min respectively. The overall discomfort score (ODS) was 9.2 at 10-point ODS scale. Various musculo-skeletal problems were observed in different body parts viz., lower back (4.6) upper arm (4.0), lower arm (4.0) and ankle (4.0). They use some indigenous preventive measures to protect themselves from these problems which were effective to some extent. Improved tools (sickle and gloves) reduced discomfort score by 35.8 per cent and also the health hazards. Perceived exertion was lessened by 20.8%. Grip fatigue was decreased for the left (87.1%) and right hands (38.4%), consequently, increased the area covered (3.0%). Hence, there is a need to disseminate the improved technology as it would decrease the drudgery and increase the efficiency in guar harvesting.

Copyright: © 2015 Gandhi S. This is an open-access article distributed under the terms of the Creative Commons Attribution License, which permits unrestricted use, distribution, and reproduction in any medium, provided the original author and source are credited.
Top