Background: Multimedia systems are of considerable benefit to the current age of information technology, being beneficial for teaching purposes. Valid and reliable tools are required to assess the effectiveness of such systems. The current study aimed to evaluate psychometric properties of the Persian version of a widely held multimedia usability measurement questionnaire.

Methods and findings: The study followed a descriptive-analytical design, in which American Association of Orthopedic Surgeons (AAOS) methodology was firstly consulted to translate the original version into Persian. Content and Face Validity assessments were carried out through Lawshe’s method. Construct validity was evaluated applying Exploratory and Confirmatory Factorial Analyses (EFA & CFA). Reliability was evaluated via Test-Retest methodology. A number of 357 medical university students and 10 survey instrument normalization experts were randomly invited for participation.

In measuring stability Pearson coefficient was calculated for all sub-scales as (Attractiveness: 0.598; Control: 0.534; Efficiency: 0.715; Helpfulness: 0.662; Learnability: 0.698; Excitement: 0.692). In Face Validity, Content Validity Index and Ratio were of acceptable value for all 48 questionnaire items as 0.88 and 0.94 correspondingly. Face Validity was also proved acceptable in all dimensions. Intra-Class Correlation Coefficient was calculated as 0.447 for Reliability.

Conclusions: Results show that measuring the Usability of Multi-Media Software questionnaire is valid and reliable in Persian, and has the potential to be employed in measuring software usability in Persian speaking society.

In the current world of technology, knowledge and information are vastly expanded through multimedia systems. That's why this type of marketing in the world is rapidly developing. The use of multimedia in education is also beneficial [1].

Software production is an extensive domain in computer science that requires expertise and knowledge. Due to its nature, his area of proficiency generally requires lower amounts of capital investment, bringing considerable added value [2,3]. Nowadays in business world, poor software design affects customer satisfaction in marketing competition and can influence the pace of work and duty, give the users have less control over their work [4]. Usability is the level of success that has been considered for interactive systems and products [5-7].

According to the International Organization for Standardization (ISO) (1998) 9241-11, Ergonomic requirements for office work with visual display terminals (VDTs Visual Display Terminal), usability can be defined as: "effectiveness, efficiency and satisfaction, with which specified users achieve specified goals in particular environments to achieve specified goals with effectiveness, efficiency and satisfaction in a specified context of use" [8-12].

Usability evaluation methods determine the problems, and are critical in ensuring quality. Usability relates to all aspects of a product such as hardware, software, visual symbols, messages, instructions, available resources and training. Each product used by human can be considered in terms of usability evaluation, such as software programs, authoring tools, and equipment and information goods [13-15].

Lack of attention to usability and it's rules would likely result in a need for system redesign, wasted user and designer energy and resources [16]. The usability is one of the most important aspects of software products. However, in practice not much attention is being paid to this issue. Because usually the knowledge, tools or time are not suitable for testing usability [17].

Due to the importance of usability, it is important to develop its measurement tools. Variety of questionnaires have widely been used to evaluate usability of interactive systems [11,18,19]. The main advantage of such methods compared to other methods is that they provide feedback from users’ point of view. In addition, questionnaires are usually quick and affordable to score and administer. A large amount of data can be collected in this way and data can be used as a reliable source to check whether the usability targets have been met or not [20,21].

Measuring the Usability of Multi-Media Software (MUMMS) questionnaire was developed in response to the rapidly changing patterns and technology of computing. MUMMS questionnaire, is an exact test and validated questionnaire to measure quality of software, based on users’ perspective. This questionnaire has 50 questions and 6 subscales "learnability", "helpfulness", "efficiency", "control", "excitement" and "attractiveness", that was designed in accordance with peoples’ overall mentality [22].

The aim of this study was to evaluate the validity and reliability of the Persian version of MUMMS questionnaire.

The study followed a descriptive-analytical framework, and intended to psychometrically evaluate the Persian version of the MUMMS questionnaire. This questionnaire consists of 2 explanatory statements, and 48 test items, with answers ranging from "strongly agree", "agree", through "Undecided", "disagree" and "strongly disagree", systematically assessing 6 subscales including "learnability", "helpfulness", "efficiency", "control", "excitement" and "attractiveness", each of which containing 8 items.

The translation process followed the AAOS guideline recommendations [23,24]. For the initial conversion into Persian, the questionnaire was translated by two bilingual individuals (one was also a usability expert) whose first language was Persian. Then two bilingual individual whose first language was English did the reverse translation, all working independently. Finally, after completion of translation process, a panel of experts familiar with the instrument made a comparison between original version and reversely translated version [25].

To evaluate the content validity of questionnaire Lawshe’s model was used. A group of experts recruited and they were asked to rate their agreements on any question in 4 aspects of judgment (necessity, relevance, clarity and simplicity of all questions). A number of 10 experts with academic and practical experience in ergonomics and software engineering formed the Content Validity evaluation panel [26,27]. Content Validity Index and Ratio were calculated, based on expert panel judgments on every single item of the questionnaire [28-30]. After content confirmation, questionnaire’s Face Validity was also tested by 40 university students, following the same pattern of judgment [31]. Construct Validity was assessed through Exploratory and Confirmatory Factor Analyses, based on 240 respondent questionnaire completions. For Reliability, Test-Test was implemented and Pearson Correlation Coefficient and Intra-class Correlation Coefficient were calculated.

With regard to Construct Validity, the results of both EFA and CFA were presented for the MUMMS questionnaire. In this evaluation KMO (Kaiser-Meyer-Olkin Measure) measures of sampling accuracy were 0.63. The scree plot supported the uni-dimensionality of the MUMMS (Figure 1). Total variance explained of the scale was 77.23%. 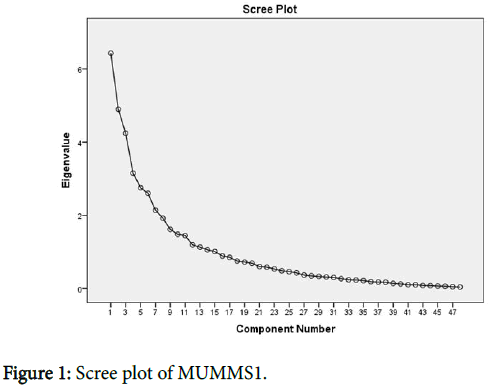 In Confirmatory Factor Analysis, questions related to the six dimensions of attractiveness, control, efficiency, learnability, helpfulness and excitement. Each one containing 8 questions. Raw data were processed into AMOS software and analysed. The CFA model showed sensibly good fit indices. Chi-square<0.001, (Chi-square)/ df=1.4., GFA (Group Factor Analysis)=0.94, CFI (Comparative Fit Index)=0.83, and NFI (Normed Fit Index) =0.81. Therefore the model fit was confirmed by the indices there was a good support for the one factor structure of the MUMMS.

Usability studies are of great importance, both for product designers and customers. However, few have been conducted in Persian interfaces. Lack of valid and reliable tools in Iran has raised concerns in Persian community to measure users attitudes about usability issues [33]. Information about usability methods show that clearly questionnaire one of the important method in usability studies [33,34]. So designing and development a questionnaire, for all researchers, including researchers in the field of ergonomics is of particular importance Usability evaluation of software based on questionnaire has caused measuring of this equipment expands [11].

Validation of a questionnaire in a new context new society is costly and consuming. However, questionnaire are the best method for selfreport that should be considered. Questionnaire cause the information to be collected in one way [23].

One of the most important features that should always be considered when choosing a tool and focusing on it is emphasized by the experts, easy translation and optimal quality of the version provided in the target language [35]. This means that these experts always try to select and use words, phrases and sentences which avoids as much as possible ambiguous, intangible, non-transparent, and multiple meanings and this way facilitate the translation and equivalence of the text of the instrument into another language.

The responsiveness scale in Content Validity Instrument in this study was Lawshe’s 4 scales. That's the amount of people's approval for the subject in four areas, the amount of necessity, relevance, clarity and simplicity was measured on a Likert scale of four options.

The other Actions included in this study were to improve the validity of the questionnaire Selection of Entry Indicators for the study Such as the use of computer science professionals, ergonomics, and occupational health with an ergonomic orientation. In this study was used one of the most reliable methods of content validity, Content Validity Ratio (CVR) and Content Validity Index (CVI).

In this study, factor analysis was performed which is a six-factor model with a number of 48 items to measure the usability of multimedia software it has a good fit And so, 48 items of questionnaire are on the same path [37].

To sum up, items for the Persian version of questionnaire were evaluated in terms of clarity, simplicity and understand ability, the suitability of the translation, suitable for the Persian community, and finely benefit for usability evaluation. Due to lack of valid and reliable tools, MUMMS questionnaire can be useful to measure the usability of multi-media software; in order to secure in this field. It should be noted that this questionnaire is not the only tool for measuring usability.

The authors would like to acknowledge all participants taking part in this study.

There is no conflict of interest to be declared regarding aspects of this study.

Copyright: © 2018 Moshtaghi S, et al. This is an open-access article distributed under the terms of the Creative Commons Attribution License, which permits unrestricted use, distribution, and reproduction in any medium, provided the original author and source are credited.
Top