Psychological Effect on Railway Industry Workers: A Cause of Stress

Psychological Effect on Railway Industry Workers: A Cause of Stress

Shift work is not new to Indian Industry. Shift work pattern was introduced in textile and jute mills, and coal mines right from the beginning of those industries. Shift work involves working outside the normal daylight hours. Shift workers might work in the evening, in the middle of the night, overtime or extra-long workdays. They also might work regular days at one time or another. Many shift workers “rotate” around the clock, which involves changing work times from day to evening or day to night. The purposive and random sampling design was used. Forty respondents were selected for descriptive and experimental data. The descriptive data was collected through interview schedule. The experimental data was gathered for different physiological parameters and psychological parameters. The results reveal significant difference in psychological parameters of letter cancellation test and fatigue severity scale denoted stress and fatigue due to rotational job demand.

As many urban economies are developing into 24-hour societies it is becoming popular amongst shift workers to compress their working hours. Alternating day, night and afternoon shifts are common in industrial work, mines, hospitals, as well as food, health, and transportation services. Shift work is also common in workplaces where technical processes cannot be interrupted without affecting the product and/or where expensive equipment is used more profitably when in constant operation. The body’s various Circadian Rhythms are “reset” every 24 hours by environmental cues, such as light and darkness. For example, body temperature increases with daylight and decreases at night. The human body is meant to be active during daytime hours, while during nighttime hours it is meant to sleep which allows it to recover and replace energy. Working at night and sleeping during the day is opposite to the body’s “biological” clocks and what the body naturally wants to do. This may make sleeping difficult; it may also mean that the body cannot recover as quickly from physical and mental exertions/demands.

Employees’ lives beyond work can be greatly influenced by rosters. The more shift work (particularly night work) and extended working hours that people are exposed to per day, per week and so on, the greater the effect on the quality of off-duty periods. To survive and remain healthy, the human body has to keep a balance between different processes within the organism. This regulation involves many systems that interact on various levels [1], and we have evolved intricate processes to keep the different systems within certain boundaries. These are so called, “homeostatic systems” (homeostasis referring to “balance” or steady state) are vital and allows the individual to retain a physiological and behavioral stability despite environmental fluctuations [2].

Humans and animals have precise and persistent rhythms in many behavioral, physiological, metabolic, cellular, and molecular parameters that, although influenced by the environment, are generated by an internal clock [3]. This clock runs, even in the absence of external time cues such as light, with a period of approximately 24 hours, and has thus been named the “circadian clock” (circadian=around a day) [4]. It is the reliable alterations of day and night of the earth that most living organisms, e.g. animals, plants and even bacteria, have adjusted their behavior and physiology function [5-7]. Rotating shift work has well-known harmful effects on human health and well-being. It disturbs sleep, wakefulness, eating patterns, social life and in the long run, often results in gastrointestinal diseases. However, studying health problems in workers is difficult. If possible, workers will change jobs if they think the work is making them ill. A shift worker might change to a day job for that reason. This is called the “healthy worker” or the “survivor” effect.

The purpose of combining ergonomics with railway industry workers is to reduce occupational health hazards of the workers. Railway is an important industry where large numbers of human resources are involved in rotational task.

Considering the above facts, the investigation entitled “Psychological Effect on Railway Industry Workers: A Cause of Stress” was planned with the following objectives:

1. To find physiological effect of work.

2. To suggest possible guidelines to reduce the work load and increase work efficiency of rotational workers.

A research design is the arrangement of conditions for collection and analysis of data with the aims to combine relevance to the research purpose with economy in procedure.

Experimental and descriptive research design were planned in order to achieve the objective of study.

In experimental research design certain variables are carefully controlled or manipulated and focus is on relationship among the variables.

Experimental and descriptive research design were planned in order to achieve the objective of study. Total sample sizes were 40 selected on random sample basis. Under descriptive research design pre-coded interview schedule was used for the present study for collection of data, related to shift work pattern and health related problems. For collection of experimental data various Psychological tests were performed to ascertain effects of stress and fatigue on a morning evening basis.

The Fatigue Severity Scale (FSS) is a method of evaluating the impact of fatigue. The FSS questionnaire contains nine statements that rate the severity of fatigue symptoms. It reflects the condition during the past week and the extent to which people agree or disagree. The scoring was done on the basis of the total scores of the person. If the total score was less than 36 then it suggests that they may not be suffering from fatigue. A total score of 36 or more suggests that they may suffer from fatigue.

The Letter Cancellation Test sheet consisted of a random block of alphabets (A-Z).The respondents were asked to cancel out total number of vowels alphabet at a given time period of 30 seconds and write their responses in the space provided.

The test was performed on a morning-evening basis and the scores obtained by the respondents were as follows:

• The average score for the LCT in the morning was obtained to be 23.43.

• The average score for the same in the evening was calculated to be 20.18.

• A significant difference of 3.25 found to be in scores from morning to evening (Figure 2). 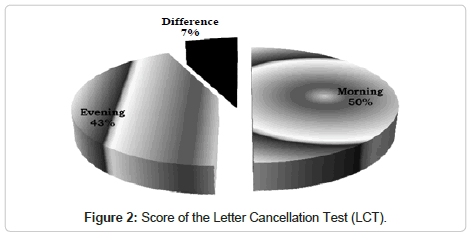 After an exhaustive review of the possible shift work management techniques, a manual entitled Shift Workers Guide for shift workers was prepared which included an introduction of what is shift work, types of shift scheduled, why shift work is hazardous, coping strategies of shift work etc. Keeping in mind the general view, to suggest possible guidelines to reduce the work load and increase work efficiency of rotational workers. People who work shifts face many problems that others do not recognize. The difficulties stem from the change in eating, sleeping, and working patterns. The best solution to the problems of shift work would be to eliminate it but this is not often a practical possibility. Shift work is likely to continue to be a reality for a large percentage of rotational shift workers. There are two basic levels where improvements can be made: The organizational level - primarily through the design of shift schedules, education and better facilities. The individual level–helping workers to get better sleep, a healthier diet, and the reduction of stress. The manual was developed for shift workers/rotational workers which is both practicable and applicable for all the shift workers of the reservation counter. An overwhelming response was given for booklet by the sample population.

Citation: © 2012 Singh D, et al. This is an open-access article distributed under the terms of the Creative Commons Attribution License, which permits unrestricted use, distribution, and reproduction in any medium, provided the original author and source are credited.

Copyright: © 2012 Singh D, et al. This is an open-access article distributed under the terms of the Creative Commons Attribution License, which permits unrestricted use, distribution, and reproduction in any medium, provided the original author and source are credited.
Top