Prevalence of Anemia and its Association with Kidney Function in Pre- Dialysis CKD Patients in Nepal: A Cross-Sectional Study

Prevalence of Anemia and its Association with Kidney Function in Pre- Dialysis CKD Patients in Nepal: A Cross-Sectional Study

Chronic kidney disease is an increasing worldwide threat to public health issue, and it is estimated to be 10.6% prevalent [1] in Nepalese population. Anemia is predictive of complication from CKD, [2-4], and is the result of several factors including decreased erythropoiesis due to inadequate erythropoietin (EPO) production from the kidneys, iron, B12 and folate deficiency due to nutritional insufficiency or increased blood loss, inflammation and accumulation of uremic toxins [5-9]. Untreated anemia is responsible for cognitive impartment, sleep disturbance, CKD progression, cardiovascular co-morbidities and significant mortality, increased health care cost, and decreased quality of life [9-12]. On the other hand correction of anemia has been shown to improve cardiac function [13], cognitive function [14] and quality of life [15,16]. Despite these benefits, the identification of anemia in Nepalese CKD population, especially on pre-dialysis, is lacking. Therefore, the present study aimed to investigate the prevalence of anemia in patients with CKD not on dialysis, and further to determine its association with kidney function.

This cross-sectional study was conducted at Kathmandu medical college and teaching hospital from 2015 to 2016.

The study sample comprised total 140 patients that satisfied the inclusion criteria. All adults aged 18 years or above and have had a serum creatinine value between 1.5 mg/dL and 6.0 mg/dL for females or between 2.0 mg/dL and 6.0 mg/dL for males within the past 12 months, and the patients who were stable for 3 months preceding study entry were eligible for the study. Patients undergoing dialysis, received treatment with epoetin alfa (including clinical study of epoetin alfa or any investigational forms of erythropoietic therapy), received iron supplementation, or received cytotoxic drug therapy within the past 3 months were excluded from the study. Patients were also excluded if they had a known diagnosis of human immunodeficiency virus, vitamin B12 or folate deficiency, hemolytic anemia, active gastrointestinal bleeding, or current treatment with drugs known to be nephrotoxic (i.e. aminoglycosides).

CKD was classified into five stages defined by the GFR and/or evidence of kidney damage, as recommended by the National Kidney Foundation (Table 1) [18].

Table 1: Classification of stage of CKD.

Anemia was defined as serum hemoglobin levels ≤ 12 g/dL in women and ≤ 13 g/dL in men, as recommended by KDIGO clinical practice guideline for anemia in chronic kidney disease [19].

Criteria for severity of anemia

Table 4: Patient profile according to presence of anemia. 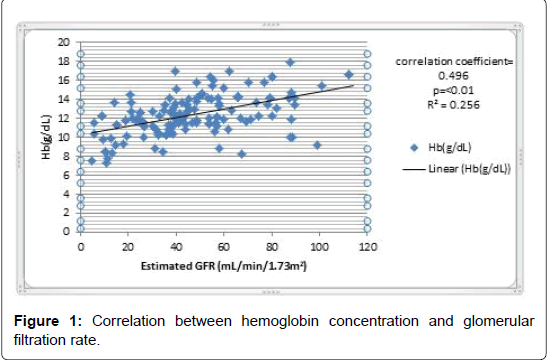 This cross-sectional study evaluated the prevalence of anemia in adults with chronic kidney disease. The available literatures indicate a wide variation in prevalence of anemia in CKD patients across the nation. In this study anemia was estimated to be present in 53.57% in any stage of CKD, and the result is somewhat lower than the previous study, 58.5% by Aleix Cases-Amenos [4] and 75.8% by Salman M et al. [21]. Similarly, a higher prevalence of anemia (64.9%; defined as hemoglobin 13 g/dL for men, and 12 g/dL for women) was observed in US nursing home residents aged 64 with CKD stages 3-5 [22].

However, a lower prevalence seen in earlier study reported by McClellan et al. [23] where (47.7%) of patients had hemoglobin ≤ 12 g/ dL and 8.9% of patients had hemoglobin ≤ 10 g/d) [4,24]. Similarly, In the MERENA observational multicentre study in Spanish cohort [25], with stages 3 and 4 CKD Patients, anemia prevalence was somewhat lower than our study (51.3% vs 53.57%). These wide variations might be explained by the differences in the inclusion and exclusion criteria of the study, the prevalence of the advanced stages of CKD, and some form of treatment provided in earlier studies.

Our study demonstrated that the prevalence of anemia was gradually increased as the CKD advanced, which corresponds well with the results of earlier studies [4,24]. As far as severity of anemia concerned, majority of the patients in this study was mild anemia followed by severe anemia. However, the prevalence of severity of anemia in this study was inconsistent with earlier: Salman [21] reported that most of the pateints had mild followed by moderate, whereas Reza et al. showed that most of the predialysis patients had moderate anemia followed by mild anemia [26]. We observed that the percentage of severe anemia in the last stage of CKD significantly increased, reflecting that the prevalence of anemia increase with declining renal function.

Available literatures [4,21] reported a varying hemoglobin level (10.9 ± 2.4-12.6 ± 1.6) in CKD patients. In our study population, mean Hb level was 12.37 ± 2.12. Similar to the findings of previous studies [4,21], our study showed a significant positive correlation between eGFR and Hb, and the tendency for hemoglobin level appeared to be decreased as the CKD advanced.

Iron stores evaluated in this study revealed that transferrin saturation and ferritin level was important predictors for anemia in pre-dialysis patients, and we noted that the TSAT (%) and ferritin level significantly declined as the kidney function deteriorate, which is in agreement with the results of earlier study [4].

Our study indicated that a substantial number of patients with CKD had anemia, and that the prevalence and severity of anemia increased with the worsening of kidney function. The study highlighted a positive correlation between GFR and Hb. The study provides an understanding of the profile of anemia and unveils that the CKD Patients, particularly at advanced disease, are at great risk for anemia. Thus, an earlier identification and effective management of anemia in pre-dialysis CKD patients seems crucial so as to prevent from the possible cardiovascular complication, and improve the clinical outcome.

We thank Nephrology unit, Department of Medicine Kathmandu Medical College Teaching Hospital and the patients involved in the study for their generous support during the study.

Copyright: © 2018 Adhikary LP, et al. This is an open-access article distributed under the terms of the Creative Commons Attribution License, which permits unrestricted use, distribution, and reproduction in any medium, provided the original author and source are credited.