The Kanawa uranium occurrence is situated along a northerly fault zone at Gubrunde horst, underlain by migmatitesgneiss, syntectonic S-type granites and minor volcanic rock. The sheared zoned is highly altered. The alteration products are sericite, chlorite, and hematite. The uranium occurrences are epigentic derived by remobilization from the host rock to the sheared zones, probably through metasomatic process where feldspars has been replaced by U-Fe-Mg in an oxidized conditions, the mineralizing fluids may be sourced from the numerous volcanic bodies around the area. The host rock showed enrichment of uranium>5, could serve as the potential source of the mineralization. The mineralized mylonite is a product of the granitic host. The Fe-Mg-Ca-P-Sr-Zr-V-Co-U may reflect mineralization fluid composition.

Uranium is a mobile element, generally been classified as a lithophilic element which tends to accumulates at the later stage of magma crystallization. It may oxidize to hexavalent state as the complex uranyl (UO2+2), which permits extensive into two phases, the volatile and fluid phase. The mobility of uranium makes it difficult in search for economic deposits. Shallow accumulate of surface occurrence may portray false existence of buried deposits. The understanding of the fundamental geologic and geochemical processes that concentrate uranium and likely environment in which the ore occur is paramount important in the search for uranium in granitoids and associated rocks.

The uranium occurrences of Gubrunde horst have been worked for three decades but reasonable prospects have not yet been identified. There is a controversy on the rock hosting the uranium occurrences, for example Funtua et al. pointed out that the mineralized portion is altered/brecciated ryholite while according to Suh and Dada, identified such mineralized portion as reddish hematitic silica, a product of deformed granites [1-3]. This paper discusses the alteration patterns, uranium mineralization and the host rock characterization using the new data on mineralogy and geochemistry of the host rocks and mineralized zone.

The Kanawa uranium mineralization is located at Gubrunde Horst, Gubrunde Horst is a major structure in the Hawal massif which is believed to be a product of Lower Cretaceous block faulting between two series of NE-SW strike border faults which is bounded to the north and west by basalts of Biu and Cretaceous sediment respectively [1,3,4]. The horst is underlain by migmatites, granite gneiss, mafic and intermediate plutonic rocks syntectonic equigranular and porphyritic granites (Figure 1). The oldest rock units in the region are the migmatites and granite-gneiss with emplacement ages ranges between 680-620 Ma and 620-590 Ma, respectively [1,5]. Mesozoic- Tertiary magmatism have recorded giving rise to alkaline rhylolites and transitional alkaline basalts [4,6]. These volcanic rocks forms part of the Burashika biomodal volcanic Group [4]. Sixteen (16) rock samples were selected for thin section and where cut in a plane normal to the mylonitic foliation. The slides were studied at the petrology laboratory of the Department of Geology, University of Ibadan. A total of thirty (30) samples were selected and analyzed using the ICP-MS method for the analysis. The samples were analyzed for major, minor, and rare earth elements (REE) at ACME Laboratories, Vancouver, Canada. Aggressive fusion techniques employing lithium metaborate/tetraborate fusion was chosen for the analyses, precision for major elements is better than 2% and for trace elements is better than 5%. The migmatite gneiss portrays banding of felsic and mafic minerals alignment. The felsic minerals are mainly quartz and plagioclase while the mafic are hornblende and biotite which shows evidence of deformation, where the biotite is stretched enclosing the ellipsoidal plagioclase. Mineral associations are polycrystalline ribbon quartz, minor K-feldspars, augen plagioclase porhyroblast, development of myrmekites at grain boundaries is observed. Hornblende with biotite flakes makes up the mafic band containing small amount of euhedral inclusion of accessory minerals (Figure 3a). Table 1: Modal composition of the rock units in Wuyo-Gubrunde area.

The uranium occurrences is been hosted at the centre of nearly northerly trending sheared zone. This sheared zone is within the porphyritic granites which may have been derived from the precursor rocks and showed progressive increase in the intensity of deformation from the external limit (E-W) of the shear zones to the center. The mylonites contain stretched orthoclase and quartz porphyroblasts while the ellipsoid plagioclase are usually fragmented. The quartz grains portray stretched ribbon like features displaying undoluse extinction with sub-grains occurring as aggregate. The alteration observed moving E-S along N-S shear zone are kaolinization, silicification and hematization.

There are several volcanic plugs in the study area; it contains olivines, labrodorite laths, augite and iron oxides. The olivines are slightly serpentinised, with corona (Figure 3d).

The alteration of feldspars may produce free ions such as Si4+, Al3+, K+, and Na+ that can be easily remobilized together with the uranium. Evidence from the geochemical data, the inconsistency on the enrichment and depletion of alkalis, silica and iron oxide reflects remobilization of these elements. The mineralized mylonite is very poor in alkalis (<1), silica (<52), higher in Fe2O3=18%, Al2O3=15%, P2O5=2.4%, uranium mineralization is associated with desilification and ferruginization. The Ishikawa (alteration index) AI, where elements gained during chlorite and sericite alteration (MgO+K2O) over the elements loss and gain (Na2O+CaO+MgO+K2O) was used as reference in this study (Table 2) [9]. The chlorite-carbonate-pyrite index (CCPI), Mg-Fe chlorite altered is typically developed where hydrothermal temperatures and water/rock ratios are at their highest level. Mg-Fe chlorite development commonly replaces plagioclase, K-feldspars which have been observed at mineralized portion on the thin section the dominant minerals is reddish iron oxide mineral (hematite) leading to the loss of alkalis which is observed by its low alkalis value of Na2O (0.09-2.7 wt%) and K2O (0.03-4.18 wt%) as shown in Figure 4. The migmatites, basalt and ferruginised mylonite falls within the truncated triangular field (carbonate-sericite ± chlorite), where the AI varies from 3-52 and CCPI from 54-99.8. The porphyritic granites and silicified mylonites shows pervasive alteration typically exhibits AI>85 and 19 Figure 5: Alteration box plot of Kanawa alteration zones [9]; (a) and (b) showing the degree of alteration; Trends of AI with (c) Na2O and (d) K2O.

Two types of granites is been recognized by Chappell and White, each related to a particular orogenic belt [10]. I-type granite which is compositionally expanded while the S-type granite are compositionally restricted. Both granites have distinctive petrochemical characteristics which reflect the differences in the sources of magma. The I-type granites are derived from basic igneous source by remelting of deep seated igneous material or the mantle, while the S-type granite are derived from melting of meta sedimentary source materials. The distinguishing mineralogical, petrochemical and field relationship of different sources as proposed by Chapell and White are compared with those of Wuyo-Gubrunde granitoids in Table 4 [10]. Such comparison showed that the granitoids shows that they are of S-type characteristics and support the model of its derivation by partial melting of meta sedimentary rocks in the crust.

Table 4: Chappell and white I and S-type granite characteristics compared with the Wuyo-Gubrunde granitoids [10].

Th/U ratio values of plutonic rocks ranges 4-6 reflects loss of uranium into the late-stage fluids, Th/U ratio is higher in porphyritic granites 7, the migmatites 5, aplite and basalt 5, 4 in silicified granites lowest in the mineralized zone 0.31. The oxidation of uranium is associated with loss in thorium which is clearly observed in this study, the mineralized portion is enriched with Fe2O3=18% and poor in Th=4.2 ppm.

The mineralized granitoids are S-type granites (Table 4) implying derived by remelting of pre-existing crustal material at a near depth of 20-30 km [11]. Remobilization of uranium from the surrounding host rock could be the likely source, U and Rb behave incompatibly in granitic melts; the kanawa uranium mineralization displays enrichment of U with loss in Rb (Figure 6) evidence of remobilization, magmatic sourced uranium on the hand shows positive correlation of Rb and U (Table 5) [12]. The variations in REE total values of the rocks (123-649 ppm) most of the samples have lower value compared to the total abundances of acid and intermediate rocks (220-350 ppm) [13], suggest original magmatic signatures have been lost due to alteration/ remobilizations.

Table 5: Summary of principal similarities between the RÖssing and Kanawa uranium mineralization. 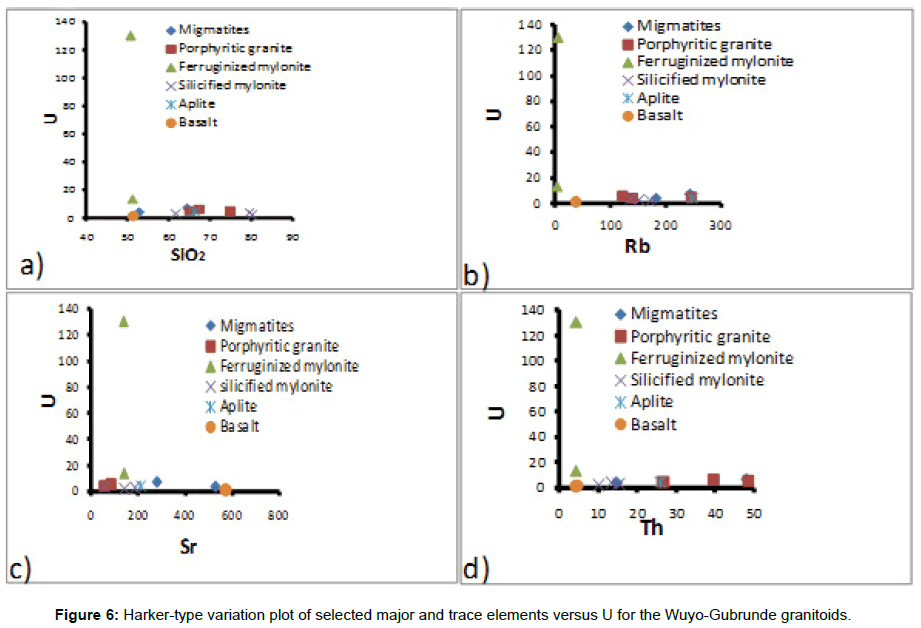 Figure 6: Harker-type variation plot of selected major and trace elements versus U for the Wuyo-Gubrunde granitoids.

Constraints on the Genesis of the Rock Hosting Wuyo- Gubrunde Uranium

The mineralized portion is situated in the sheared/altered zone trending northerly, dipping almost vertical, bounded side by side by the porphyritic granite. It is fine grained, reddish tectonite. This host rock is been earlier reported as rhyolite [1], which is later argued to be a deformational product of the granites under oxidizing condition [3]. The plot of Wuyo-Gubrunde granitoids on Rb-Ba-Sr plot, most of the samples cluster in the field of normal-anormalous granites (Figure 7), the ferruginised granite that is mineralized fall in the field of granodiorites and quartz-diorites. Anomalous granite indicates that the rocks have suffered from metasomatism as a result of shearing, anoumalous granites may also shift in the field of granodiorite and quartz-diorite as a result of low Rb content, in this case the mineralized altered granite is depleted in Rb (3.4-5.2 ppm) may reflects Rb fractionation during metasomatism. On the TAS plot for volcanic rocks [14], most of the samples cluster in the field of dacite to rhyolites (Figure 7), but the mineralised altered ganite falls in the field of basalt due to low silica content (50.83-51.28 wt%), hence it is not rhyolitic. The granitoids can be classified by using normative An-Ab-Or teneray diagram of O’Connor [15]. All the granitoids fall in the field of granites except the ferruginised mylonite which shifts to the field of granodiorites. A detailed field, petrographic and alteration studies of Kanawa area coupled with geochemistry of the host rock and uranium occurrences. Based on our results we characterize our study area:

1. The Kanawa granitoids are S-type granites, suggesting from partial melting of crustal materials.

2. The sheared zoned is highly altered. The alteration products are sericite, chlorite and hematite.

3. The uranium occurrences are epigentic derived by remobilization from the host rock to the sheared zones, probably through metasomatic process where feldspars have been replaced by U-Fe-Mg in an oxidized condition, the mineralizing fluids may be sourced from the numerous volcanic bodies around the area.

4. The mineralized mylonite is a product of the granitic host. The pathfinder elements of Kanawa uranium occurrences are U-Fe- Mg-Ca-P-Sr-Zr-V-Co.

Copyright: © 2017 Bute SI. This is an open-access article distributed under the terms of the Creative Commons Attribution License, which permits unrestricted use, distribution, and reproduction in any medium, provided the original author and source are credited.
Top