A stream’s sediment load is typically deposited, eroded, and redeposited many times in a stream channel, especially during climatic variations such as flooding. During this process of deposition, erosion and redeposition the chemistry of stream sediments changes. Understanding the past environmental conditions under which these sediments have been subjected to are of great significance to geologist interested in exploring for mineral and petroleum resources. Paleo Environmental studies conducted on 17 stream sediment samples in parts of Awe-Obi area using chemical index of alteration (CIA) and chemical index of weathering (CIW) revealed that the area is intense to extremely weathered with calculated values between 67 and 99. The mineralogical index of alteration (MIA) was studied to evaluate the degree of mineralogical weathering. The calculated values revealed that Awe-Obi is intermediate, intense-extremely weathered. Index of compositional variability (ICV) was used in this study as measure of sediment maturity. The calculated ICV values showed all the samples as immature except sample SSB8 which has a value of 0.765515. Paleo-Oxygenation condition of the study area was conducted using Ni/Co ratio. This revealed that all the samples were deposited in an oxygenated condition.

Stream sediments are composites of rock and soil material eroded upstream in a catchment area. A stream’s sediment load is typically deposited, eroded, and redeposited many times in a stream channel, especially during climatic variations such as flooding. During this process of deposition, erosion and redeposition the chemistry of stream sediments changes. Understanding the past environmental conditions under which these sediments have been subjected to are of great significance to geologist interested in exploring for mineral and petroleum resources. Various geochemical proxies have been proposed to estimate the intensity of chemical weathering in continents.

Geochemical weathering proxies make use of the changes of bulk rock geochemical composition caused by chemical alteration. A very simple proxy is the Ruxton Ratio R [1] given by the SiO2/Al2O3 ratio. The ratio assumes that Al2O3 remains immobile during weathering so that changes in R reflect silica loss as a proxy for total element loss. Although Ruxton Ratio may be useful when weathering profiles on rocks of felsic and intermediate composition are considered, it was found to be poorly correlated to the actual weathering grade of a silicate rock [2]. As in hydrolytical weathering, i.e. the transformation of feldspar to clay minerals and the coincident mobility of the main cations is a major process of chemical, Parker [3] considered it more useful to mirror changes in Na+, K+, Ca2+ and Mg2+ and created a weathering index (WIP, Weathering Index of Parker). Although, WIP is considered the most appropriate for application to weathering profiles on heterogeneous and homogeneous parent rock, some implicit assumptions rendered the index limited in application. The WIP implicitly assumes that all Ca2+ in a silicate rock is contained in silicate minerals. More problematic still is the lack of consideration of a relatively immobile reference phase like Al2O3 in the formula which would help to monitor relative changes of composition of the relevant mineral components. The disadvantages of the WIP are overcome in the Chemical Index of Alteration (CIA) using whole rock geochemical data of major element oxides [4]. It represents a ratio of predominantly immobile Al2O3 to the mobile cations Na+, K+ and Ca2+ given as oxides.

The area of study falls within the Middle Benue Trough and stratigraphically it is composed of continental and marine sediments, represented by sandstone, shale and the limestone of the Asu River Group [5,6]. The succession upward is the Awe formation which consists of transitional sandstone, shale, siltstone and limestone and the fluviatile sandstone of the Keana Formation. Major lead-zinc-baryte mineralization is associated with the mineralized hydrothermal vein that is a consequence of the tectonic rifting that led to the emplacement of the Benue Trough which was in part controlled by transcurrent fault activity [7]. These faultings are thought to have been responsible for creating pathways through which hydrothermal veins of possibly magmatic origin [8] or remobilized meteoric waters enriched in Pb, Zn and Na percolated. Two sets of fractures were recognized in the Keana Azara area, the former of which are associated with the Pb- Zn mineralization while the later was associated with the baryte mineralization [5].

A total of Seventeen (17) samples were collected in the study area (parts of Awe-Obi North-Central Nigeria) (Figure 1). The samples collected were laid out in pre-numbered evaporating dishes to dry and then placed in low temperature oven and maintained at 105°C for 12 hours. Each sample was disaggregated and homogenized by the use of agate pestle and mortar [9]. A 100 mesh screen was used. This is because in environmental research with the purpose of assessment of total elemental concentration, it is necessary to use a broader screen value compared to that needed in mineral exploration [10]. The homogenized samples were passed through 100 mesh nylon screen. This helped extract metals from the <100 mesh fractions which is considered highly adsorptive fraction. The nylon screen was used to avoid contamination. The samples were digested by the use of aqua regia based on standard methods described in Fletcher (1981) [9]. 0.5 g of the screened samples were weighed out and placed in 20 ml beaker. 10 ml of aqua regia was added and stirred and was gently boiled on hot plate to a volume of 25 ml. 10 ml of deionized water was added and gently boiled to the volume of 5 ml. This was kept to cool and there after filtered into 50 ml measuring cylinder. Beaker and filter paper were washed into the cylinder to a level of 12.5 ml. Deionized water was added to make up to 25 ml. The samples were analyzed for major and trace elements using the Inductive Couples Plasma Optical Emission Spectrometer (ICPMS) technique in Acme Laboratory Ltd Vancouver, Canada. 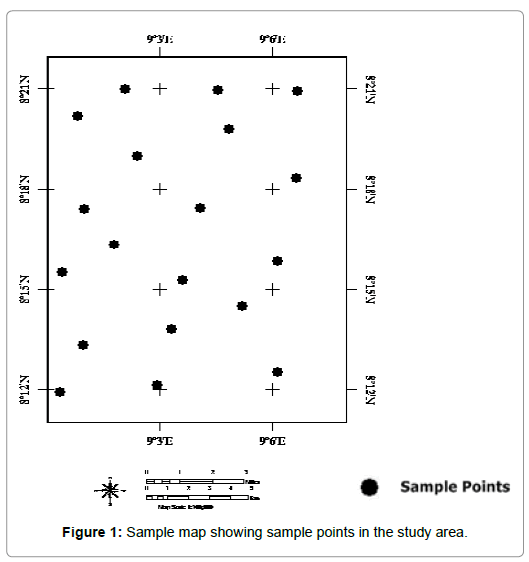 Chemical index of alteration (CIA) was proposed by Nesbitt and Young [4] as a measure of the role played by chemical weathering in the production of clastic sediments. CIA is calculated using this equation: CIA=(Al2O3/Al2O3+CaO*+Na2O+K2O) × 100. (Where CaO* is calcium in silicates). CaO* was corrected using the formula (CaO*=CaO-P2O5 × 10/3). From this formula, if the resultant CaO* value is less than Na2O, CaO* is assumed to be equal to CaO.

The above equation yields CIA values between 50 and 60 for incipient weathering, between 60 and 80 for intense weathering and more than 80 for extreme weathering. CIA for different samples within the study area is given in Table 1 (Figure 2). 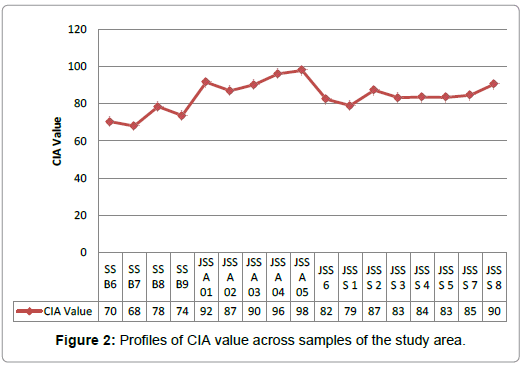 Figure 2: Profiles of CIA value across samples of the study area. Figure 3: Profiles of CIW value across samples of the study area.

Because CIA ranges from 50-100 and cannot be directly applied for normative calculations, thus it is necessary to calculate the mineralogical index of alteration given by the formula. 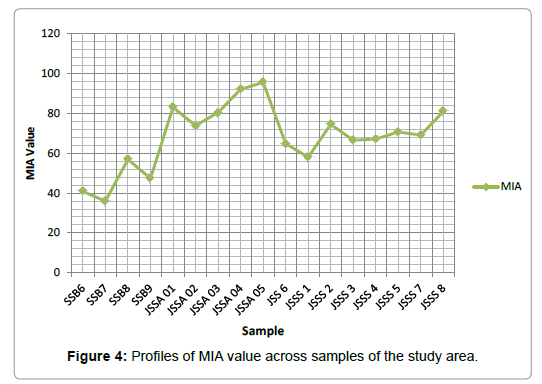 Figure 4: Profiles of MIA value across samples of the study area.

Because minerals show resistance to weathering, index of compositional variability can be used as a measure of sediment maturity. This index measures the abundance of alumina relative to other major cations in a rock or mineral. ICV for sediments was calculated using the formula:

This formula excludes silicates so as to eliminate the problem of quartz dilution. Using this formular, ICV>1 indicates immature sediments, while ICV values <1 indicates matured sediments. Calculated ICV values for samples are presented on Table 4 (Figure 5). 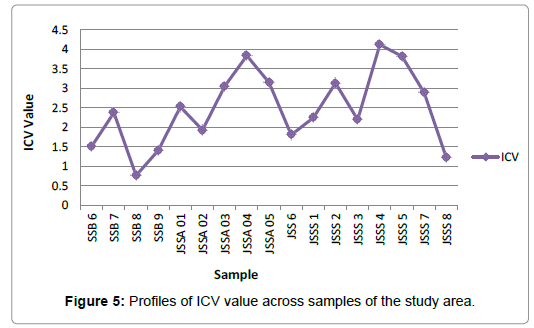 Figure 5: Profiles of ICV value across samples of the study area.

Table 5: Ni/Co ratio for samples in parts of Awe-Obi area.

The Chemical Index of Alteration (CIA) [4] is the most widely applied and most indicative of the available weathering indices. From this study, one can conclude that the sediments from the study area have been subjected to varying degree of weathering and were deposited in an oxidizing environment. Furthermore, the ICV values for sediments in the study area suggest most sediments are immature. The high CIA, CIW and MIA values are indications that the sediments have been subjected to severe alteration under humid climatic condition.

Copyright: © 2015 Gajere JN, et al. This is an open-access article distributed under the terms of the Creative Commons Attribution License, which permits unrestricted use, distribution, and reproduction in any medium, provided the original author and source are credited.
Top