Oral Ingestion of Cannabis in a 19 Months Old Infant

According to the World Health Organization (WHO), 2.5 percent of the world population, use cannabis, making it the world's most widely cultivated, trafficked, and abused illicit substance. In children, acute marijuana intoxication mainly occurs after exploratory ingestion of marijuana intended for adult use. Intentional exposure of children to cannabis depends on the child age either by caretakers Intentionally exposing them to its smoke by inhalation, or direct cannabis inhalation and use by the kids themselves especially adolescent population.
After exposures, children may display simple sleepiness to depressed mental status and In large overdoses even respiratory depression can happen making the patients in need of invasive ventilation support.
We are reporting a case of a 19 months old boy presenting with acute decrease level of consciousness, and slow improvement of his mental depression over 24 hours following oral cannabis intoxication.

Substance abuse is a significant problem worldwide affecting the health of the individuals and has a negative impact on their relationship with society creating an economic burden on the government. There are limited studies regarding substance abuse in Saudi Arabia and its side effects as most of the cases remain un-reported [1].

The most common substance abused was tobacco followed by amphetamines, Cannabis usage was found more common in adolescents than adults and it has physical and psychological symptoms. The presence of psychotic symptoms among drug users varied depending on the severity of its abuse. In general substance abuse was more common in young males due to peer pressure, which was found as the main causative factor.

The clinical manifestations of acute cannabis intoxication vary according to age. Neurologic abnormalities are more prominent in children and it can present in variable presentation from ataxia to the extent of prolonged coma, which can be life threatening [2].

We are reporting a case of a 19 months old boy presenting with acute decrease level of consciousness, and slow improvement of his mental depression over 24 hours following oral cannabis intoxication. Physicians should consider toxic ingestion in their differential diagnosis when children presented with clear toxidrome or sudden neurological impairments.

A 19 months old boy healthy, brought by his parent to our Pediatric ED with history of acute decrease level of consciousness last 3 hours before ER presentation. According to the family 3 hrs ago the patientwas fine asymptomatic then the mother started to notice that he is sleepy although it was not his sleeping time.

When she tried to wake him up for his dinner she found that he is unresponsive with clear decrease level of consciousness so the patient was rushed to our ED and pushed to rescues area.

Quickly the Airway was check and it was patent, patient connected to the monitor on supportive oxygen, no signs of bleeding or trauma and GCS was 10/15 with pin point pupils.

Full History and examination was taken. Both parents are medical staff highly educate, mother mentioned that he was fine until last 3 hours when she started to notice the sleepiness, the father mentioned before the change in his level of activity he saw him eating birds stool in the garden and he cleaned him. The father was not sure if it was the cause of his symptoms but he mentioned it.

There was No History of Trauma, Respiratory symptoms, Gastrointestinal or Genitourinary symptoms, Abnormal movements or seizure attacks, skin rash, contact with sick Patients. All the systemic review was negative.

On Examination: The patient was sleepy, not in distress no signs of trauma, Febrile but not septic looking, Clear moist skin with redness all over the body but no skin rash, No meningeal signs (Table 1).

Table 1: Statistics of the patient.

VBG and random glucose checked unremarkable. Blood and urine investigations sent all unremarkable. Urine toxicology screening ordered pending at that time. CT done to roll out CNS causes and it was unremarkable.

At that point we were strongly thinking of toxicology causes especially after ordering the Toxicology screen and noticing the change of the father behavior and history. Thinking of mixed picture of ingestion we decided to give Naloxone, directly we witnessed dramatic improvement of the patient GCS from 10/15 to clear 13/15 and the patient started to wake up crying still not back to his normal mental status but there is an improvement. Toxicology team involved at this point and they suggested to give another dose of Naloxone and add to it Flumazenil. Even with the improvement we noticed the Toxicology team agreed with us it is not the typical presentation of opioid ingestion and we should look for others. Family updated with the current status of the patient and the father disclaimed that he was with the child when he orally exposed to Cannabis ingesting it orally. The father and his brother are cannabis users, they were high in a private area of the family house when the child came in and took the cannabis piece and eat it. We asked about other drugs presenting in the area, the father denied that and he stated that he was afraid of the mother reaction or to be exposed to legal authorities. Urine toxicology came back positive for cannabis. Pediatric intensive care team admitted the patient for observation and supportive management,Child protection Services was involved too (Figure 1). 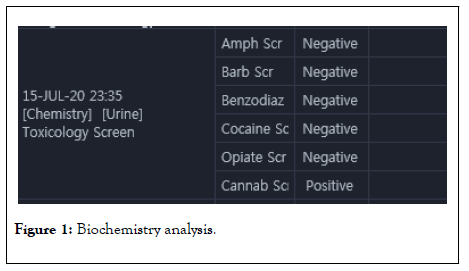 During the admission the neurovitals of patient monitored, patient stayed in admission for 5 days 3 days of them were in PICU with slow improvement in his mental depression. No invasive ventilation used, no medications given, only observation and supportive management applied. During admission level of consciousness improved but slowly no complications occurred and the patient was discharged home clinically and vitally stable going back to his full level of consciousness and usual health status with closed monitoring and follow up by the child protection team.

Children aged one to four years of age are especially at risk for accidental poisoning due to exploratory ingestion. With cannabis’s growing popularity, its modes of delivery have evolved to include vaping, dabbing, topical applications, and oral ingestion through baked goods and candies. Oral ingestion puts children particularly at risk of acute intoxication due to the appealing nature of edibles and its easy consumption [3]. In our case report the patient was exposed to the cannabis through oral route, eating it in his raw form.

Although in the Kingdom of Saudi Arabia the use of cannabis is prohibited, yet we face cases presenting to the Pediatric ED with cannabis intoxication, unfortunately we don’t have official data on them but in the united states for example, In addition to increased emergency room visits, from 2005 to 2011, the call volume at Poison Control Centers for pediatric marijuana exposures had increased by 30.3% in the states where marijuana has been decriminalized as compared to a steady rate in states that have not adopted marijuana decriminalization legislation [4].

The cannabis plant contains more than 421 chemicals of which 61 are cannabinoids. Among the known listed compounds, delta 9-tetrahydrocannabinol (9-THC) is considered as the most psychoactive component contributing to the behavioral toxicity of cannabis [5].

In comparison to smoking and inhalation, after oral ingestion systemic absorption is relatively slow resulting in maximum 9- THC plasma concentration within 1-2 hours which could be delayed by few hours in certain cases(5). like in our patients the symptoms started after 3 hours from ingestion. Much higher concentration of 11-OH THC was produced after ingestion than inhalation. Following assimilation via the blood, 9-THC rapidly penetrates in to fat tissues and highly vascularized tissues including brain and muscle resulting in rapid decrease in plasma concentration. This tissue distribution is followed by slow redistribution of it from the deep fat deposits back into the blood stream [5].

Regarding the side effects from oral exposure, Oral absorption has more variability and lower bioavailability. The acute effects of ingested cannabis may last for several hours, depending on concentration, formulation of the product, and gastrointestinal motility, vascularity, and blood flow. THC has a fast initial halflife (6 minutes) and a longer terminal half-life (22 hours) [6]. In our patient the effect lasted around 26 hrs, yet kept under observation for total of 5 days.

Treatment consists of supportive measures including intravenous fluid hydration. Deep comas may require airway support for obstruction and ventilation. At least 6 hours of observation has been recommended; however, some cases have symptoms persisting beyond 24 hours. Lack of an initial ingestion history is common, and specific history of therapeutic and recreational drugs for all recent caregivers should be sought. Histories must include assessment of child protection issues in such cases of poisonings. To date, there have not been any reported cases of pediatric deaths from cannabis edibles [7].

In the case of our Patient, Toxicology and PICU team involved, when the patient started to more stabilize he was transferred to a regular ward with close monitoring, Child protection team and official authorities involved.

Copyright: © 2020 Alomari MS, et al. This is an open-access article distributed under the terms of the Creative Commons Attribution License, which permits unrestricted use, distribution, and reproduction in any medium, provided the original author and source are credited.