NASA EOS Aqua satellite AMSR-E data were used for snow variation study in Northern Hemisphere (NH) from 2007 to 2011 for January, April, July and October months with 500 m elevation difference. Monitoring of the seasonal snow cover with different elevation is important for several purposes such as climatology, hydrometeorology, water use and control and hydrology, including flood forecasting and food production.

The objective of this study was to analyze the seasonal snow type and snow cover changes on the NH and its relations with different elevation. Such information is urgently need for the satellite precipitation community to better delineate snow covered regions to minimize the impact of falsely classifying raining areas from snow on the ground [1,2]. This type of research work is also useful to improve the quality of future NASA satellite data [3]. This paper describes an approach to assemble a consistent 5-year record of seasonal snow covered area of NH. There are, however, very limited data that can be used to corroborate our findings (satellite data, secondary data or otherwise), making extensive quantitative validation of the snow estimates extremely challenging [4].

The methodology involves conversion of NASA EOS Aqua satellite AMSR-E SWE data into 6 snow classes, computation of NDSI, determination of the boundary between snow classes from spectral response data and threshold slicing of the image data [5]. Accuracy assessment of AMSR-E snow products was accomplished using Geographic Information System (GIS) techniques. There are many techniques available for detecting and recording differences, such as image differencing, ratios and correlation [6,7]. However, the simple detection of change is rarely sufficient in itself: information is generally required about the initial and final snow cover analysis as described by [8]

Furthermore, detection of image differences may be confused with problems in penology and cropping and such problems may be exacerbated by limited image availability, poor quality in temperate zones and difficulties in calibrating poor images [9]. Post-classification comparisons of derived, thematic maps go beyond simple change detection because they attempt to quantify the different types of change [10]. Their degree of success depends upon the reliability of the maps that have been made by image classification. Broadly speaking, both large scale changes such as very low snow class, and small scale changes like extreme snow, might be mapped reasonably easily [11,12].

The Advanced Microwave Scanning Radiometer - Earth Observing System (AMSR-E) is a twelve-channel, six-frequency, passivemicrowave radiometer system. It measures horizontally and vertically polarized brightness temperatures at 6.9, 10.7, 18.7, 23.8, 36.5 and 89.0 GHz. Spatial resolutions of the individual measurements varies from 5.4 km at 89 GHz to 56 km at 6.9 GHz. AMSR-E improves upon past microwave radiometers. The monthly level-3 AMSR-E snow water equivalent (SWE) data AE MoSno (AMSR-E/Aqua monthly L3 Global Snow Water Equivalent EASE-Grids) in Northern Hemisphere were obtained from the NSIDC NASA website [13-15]. These data are stored in Hierarchical Data Format–Earth Observing System (HDF–EOS) format and contain SWE data and quality assurance flags mapped to 25 km Equal-Area Scalable Earth Grids (EASE-Grids). Actual SWE values are scaled down by a factor of 2 for storing in the HDF-EOS file, resulting in a stored data range of 0-240. Users must multiply the SWE values in the file by a factor of 2 to scale the snow depth data up to the correct range of 0-480 mm. Finally Shuttle Radar Topography Mission (SRTM) data of approximately 90 m resolution were downloaded from the website and used to prepare the digital elevation map (DEM) [16].

Unsupervised classification was performed here using 0 to 255 gray levels and digital topographic maps. All AMSR-E monthly SWE images were transformed into ESRI grid format files with Lambert Azimuthal equal area projection and the grid was re-sampled by binary approach [17,18]. The end gray levels from 240 to 255 of AMSR-E data indicates a snow free surface (or land surface), off-earth, land or snow impossible, ice sheet, water and data missing, respectively. In terms of snow depth each gray level need to multiply by factor 2 so this data show snow depth from 0 to 480 mm [19,20].

Snow cover classification was computed from 2007 to 2011 for the months of January, April, July and October (Figure 1). Separate analyses were done for 500 m elevation ranges. The snow was classified into six main classes based on SWE values: Very low snow, low snow, medium snow, high snow, very high snow and extreme snow and land which was covered by snow in winter but not in other seasons was classified as “No Snow” class (Figure 2). The coldest month has all six snow type classes due to snow pack growth whereas the summer months only contain residual snow at the highest elevations. Sharp season-to-season differences were noted. The final results show the greatest snow cover extent in January whereas total snow in April is 60%, July 3% and in October near to 25% (Table 1). In terms of inter-seasonal variations during the study period, the minimum (1.53 million km2) snow cover extent was observed in July 2008 and the maximum (60.0 km2) in January 2010 (Figure 2). In terms of elevation, in January snow covered area represent more than 70% of surfaces with altitudes in between 0 to 2000m, and in summer more than 70% for altitudes higher than 5000m and it`s totally constant at altitude from 7000 m and above (Figure 3 and Table 2).

Table 1: Snow classes and snow cover area in million km2 for January, April, July and October months from 2007 to 2011. 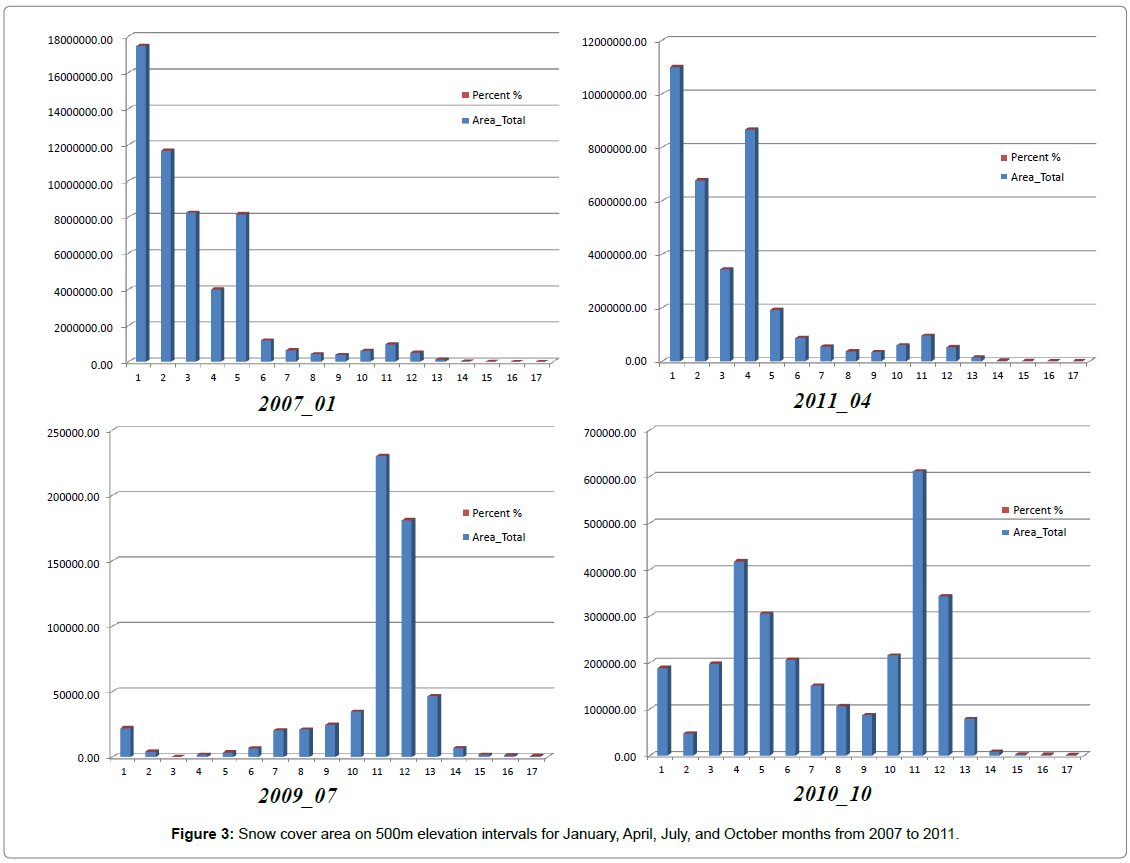 The seasonal snow cover extent changes from 2007 to 2011 were successfully monitored by NASA EOS Aqua satellite AMSR-E data. Finally, this study shows how NASA EOS Aqua satellite AMSR-E data can be useful for the long-term observation of the intra and inter-annual variability of snow packs in rather inaccessible regions and providing useful information on a critical component of the hydrological cycle, where the network of meteorological stations is deficient.

Copyright: © 2014 Boori MS, et al. This is an open-access article distributed under the terms of the Creative Commons Attribution License, which permits unrestricted use, distribution, and reproduction in any medium, provided the original author and source are credited.
Top