Background: Musculoskeletal disorders (MSDs) are a major cause of occupational disability worldwide and impose a considerable burden on the individual, society and industry in terms of absenteeism and cost of treatment.
Objective: The purpose of this paper is to determine the prevalence and predictive factors of MSDs and associated disability among bank workers in Ghana. Methods: The 12-month period-prevalence of self-reported MSDs was studied among 230 bank workers in Kumasi, Ghana. The cross-sectional survey used a previously validated self-administered questionnaire that included the Nordic musculoskeletal questionnaire (NMQ) and the 12-item general health questionnaire (GHQ12).
Results: Most (83.5%) of the workers suffered at least one MSD resulting in 15.7% disability rate. The most common reported symptoms were lower back pain (64.8%), upper back pain (61.7%), neck pain (47.4%) and shoulder pain (37.4%). Two multi factor-predictor logistic models fitted to the data showed that female sex, longer job duration and high GHQ12 score were significant predictors of MSDs while high GHQ12 score, sedentary lifestyle and alcohol drinking were significant predictors of MSD-associated disability.
Conclusions: Attitudinal change, treatment and interventional programs may reduce the incidence of this common occupational injury.

Musculoskeletal disorders (MSDs) are a wide range of inflammatory and degenerative conditions of the locomotors apparatus, including peripheral nerves and supporting blood vessels with consequent pain and discomfort [1-3]. MSDs affect all persons regardless of age and sex, and are prevalent across a wide range of industries and jobs [4-7]. Data show that musculoskeletal disorders account for between 42% and 58% of all work-related illnesses [8] and are the most frequent cause of all health-related absences from work [9-11]. Thus, MSDs cause not only individual suffering but also pose considerable financial costs to the individual, industry and society at large extent. Approximately 93% of the cost is caused by absenteeism from work in some cases [12]. According to Hutubessy et al. [13] the total costs estimates vary from 0.28 to 1.7% of the Gross National Product in the Netherlands.

In the literature a myriad of factors of have been associated with the development of MSDs. These include awkward posture, manual handling, heavy lifting, strenuous task and repetitive actions [14,15]. Demographics, workload and psychosocial factors are also known to play important roles in the development and progression of these disorders [16,17]. The modernization in offices has led to the introduction of information technology (IT) tools in the workplace. More people are using visual display terminals (VDT) and related equipment to complete their work. Computer usage has been linked to increased risk of musculoskeletal disorders [3,18-21]. In the banking sector, workers are involved in long periods of static work, awkward posture and repetitive computer activities. Thus, the work tasks of bank workers predispose them to MSDs. Earlier studies have reported high prevalence of MSDs among bank office workers, with a prevalence ranging between 60% [22] and 80% [23]. The high prevalence of MSDs among bank workers suggests they are a significant risk group for MSDs.

Studies conducted in the past decade have shown that the prevalence, etiology and risk factors of MSDs vary among individuals in different professions, environment and geographical location. To date, there is no data regarding this important occupational injury among office workers in Ghana. The negative impact of MSDs on the quality of life justifies choosing this subject to study. The primary objective of this study, therefore, is to examine the prevalence of MSDs and the associated disability among bank office workers in Ghana and to identify the risk factors.

A cross-sectional study was conducted among 400 workers in 30 banks, conveniently selected from among the major banks in the Kumasi Metropolis of Ghana. The participants were recruited by a quota sampling techniques based on the staff strength of each bank with fewer participants coming from banks with lower staff strength. Eligibility criteria for participants were as follows: having worked for at least one year in the current job and not having or had no underlying disorder or accidents affecting the musculoskeletal system. A detailed self-designed three-part questionnaire was administered to each consented study participant. Part one of the questionnaire collected data on participants’ personal information (age, sex, gender, marital status, smoking/alcohol history, work tenure and physical activity. Part two assessed the occurrence of MSDs using the short version of Standardized Nordic Musculoskeletal Questionnaire [24], whereby participants were asked whether they have or had troubles in the indicated areas, and whether they suffered any disabling effect (so called MSD-associated disability) or absenteeism from work as a result of the trouble during the preceding 12 months. Part three assessed a participant’s psychological well-being using a modified Goldberg’s 12- item general health questionnaire (GHQ12). The questionnaire had a good internal consistency (Cronbach’s α=0.81). The data was entered and analyzed with SPSS version 17. Statistical analyses were considered significant if p ≤ 0.05. Univariate predictors of MSDs and associated disability were determined in a two-step analysis. First, categorical variables were dichotomized and analyzed with logistic regression. Secondly, continuous data were analyzed with t-test. Predictive equations were developed using multiple logistic regression analysis.

Demographic of characteristics of the study population

Two hundred and forty-one out of the 400 questionnaires were returned yielding a response rate of 60.3%. After excluding incomplete questionnaires and respondents who did not meet the eligibility criteria, the final response rate was 57.5% (i.e. 230 respondents). The low response was due to lack of time as explained by non participants. table 1 presents the demographic characteristics for the 230 bank workers in the study. Their mean age and job tenure were 30.6 ± 5.4 years and 4.0 ± 3.2 years respectively. Females and males accounted for 51.7% and 48.3% of the population respectively. More than half (63.0%) of the workers were married and the remaining 37.0% were single. Alcohol consumption was reported by 19% and smoking by none (0.0%). All workers attained above secondary education. The mean GHQ12 score was ‘normal’ (10.7 ± 5.8) and only 0.9% were psychologically distressed (moderate to severe). Most (66.1%) of the workers were physically inactive and sedentary. 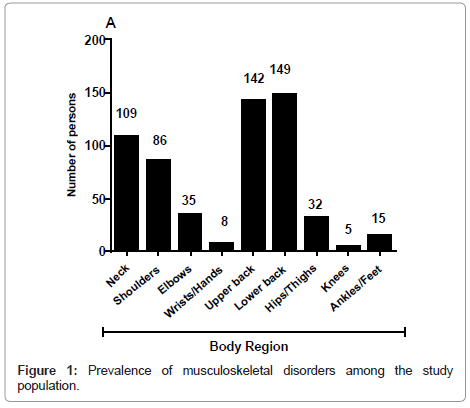 Figure 1: Prevalence of musculoskeletal disorders among the study population. 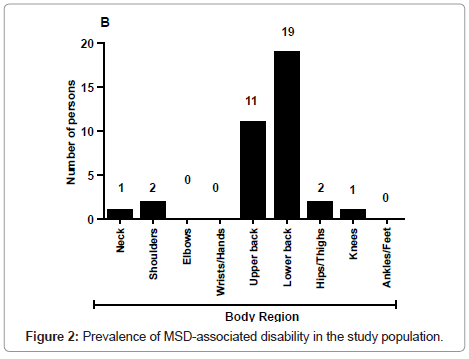 Figure 2: Prevalence of MSD-associated disability in the study population.

People at work face a variety of hazards owing to several factors including adverse ergonomic conditions, physical and psychosocial factors. The present study assessed the prevalence of MSDs among a cross section of bank workers in the Kumasi Metropolis of Ghana. Our findings showed that 83.5% of bank workers suffered at least one episode of MSD during the past 12 months, indicating MSDs are common among bank workers. The disability rate was 15.7%. Using the same questionnaire, Akrouf et al. [23] reported a slightly lower prevalence of 80% and a higher disability rate of 42% among bank office workers in Kuwait. Our study showed that lower back pain (64.8%) upper back (61.7%) and neck (47.4%) were the common symptoms indicating MSDs were defects resulting from prolonged posture. The less affected body parts were the knee (2.2%), wrist (3.0%) and ankle/ foot (6.5%). The pattern of distribution of pain in different body parts was similar to those found in other studies with the back, neck and shoulder regions being most commonly affected [3,23]. However, the prevalence of wrist/hand pains in the present study was very low compared with the high prevalence reported in certain occupations in which video display terminals (VDU) are used [3,18-21,25]. Subjects in the present study were drawn from various departments in the banks and it is likely many of these workers were not frequent VDT users, hence the low incidence wrist/hand pain.

Male bank workers were less likely to report musculoskeletal symptoms than females. A previous study on bank office workers reported similar gender differences. The possible explanation for this gender differences in the prevalence of MSDs could be attributed to differences in occupational exposure among men and women [26] and sex differences in biological and anthropometric measurements [27].

In this study, psychological distress was positively associated with MSDs. An association between musculoskeletal disorders and psychosocial factors has been previously suggested among bank office workers [21]. The exact mechanism through which psychosocial stress factors at work relate to MSDs is not known. However, it well recognized that high mental and psychological stress may increase muscle tension and decrease micro pauses in muscle activity. This may lead to muscle fatigue, even in cases of low loads due to continuous firing of low threshold motor units, which are triggered not only by low level physical loading but also by mental loading [28]. The central nervous system response to job stress may amplify painful sensations resulting in a higher prevalence of MSDs [29].

The present study revealed that more musculoskeletal symptoms were likely to be reported in individuals with more years of work in the bank. An association between MSDs and longer job tenure has been reported by other researchers [30]. We found evidence of positive associations between disability and lifestyle factors (sedentary life and alcohol drinking) and psychological distress. These factors may have exacerbated pre-existing musculoskeletal pains resulting in chronic MSD and the resultant disability or absenteeism. Sedentary activity has been associated with higher prevalence rates of low back symptoms and sick leave [31]. Physical exercise has been shown to be an effective preventive intervention for neck and shoulder pains [32]. Thus, exercise is essential for bank workers in the prevention and treatment of musculoskeletal disorders, stress and to decrease the existing MSDs pains. The high prevalence of MSDs in this population may be ameliorated by ergonomic design of workstation and VDTs. Training of the workers in ergonomic principles and proper working postures would also be helpful.

Our cross sectional study was only able to account for the contribution of a few risk factors of MSDs. A number of confounding factors such as physical workload, job satisfaction and psychological issues were not explored. According to Eltayeb et al. [33], risk factors of musculoskeletal complaints in computer workers consist of a mixture of physical and psychosocial characteristics. There is the need for a cross-sectional study with a large sample size and subsequent longitudinal studies to provide evidence in support of our study results.

In conclusion, this study identified some risk factors of MSDs and disability among bank workers in Ghana. Two logistic models of predictive factors are proposed. According to the first model, high GHQ12 score and long job tenure were positively related to MSDs. Given the same job tenure and GHQ12 score, females were more likely to suffer MSDs than males.

The second model shows that given the same GHQ12 score, a sedentary worker who drinks alcohol was more likely to suffer disability due to MSDs than the physically active worker who does not drink alcohol.

The elimination of these risk factors through attitudinal change, treatment and other interventional programmes may reduce the high prevalence of MSDs in this population.

We would like to thank the management and staff of the various banks in Kumasi for granting us the opportunity to conduct this study.

Copyright: © 2012 Abledu JK, et al. This is an open-access article distributed under the terms of the Creative Commons Attribution License, which permits unrestricted use, distribution, and reproduction in any medium, provided the original author and source are credited.
Top