Snowmelt runoff is a significant water resource in the western United States. However this resource is extremely sensitive to changes in the local or regional climate. In this paper the potential changes in snowmelt runoff volume in response to changes in the local climate for the Animas River basin, Colorado were studied. A set of statistically downscaled general circulation model scenarios encompassing generally warmer and drier future climates were used to drive the Snowmelt Runoff Model (SRM) to investigate how snowmelt season basinwide runoff would respond to these conditions. Results suggest a shift in the timing and size of the snowmelt relative to historical measurements, with increases in April-May runoff volume offset by decreases in June-July runoff. The success of the SRM in modeling these climate change impacts could provide valuable data for water resource planners of similar snowmelt dominated river basins across the western United States.

The process of snowmelt is crucial in controlling the streamflow response of any mountain watershed dominated by snowfall in the winter months. As much as 75-80% of annual streamflow across the western United States (US) originates from this snowmelt source [1-3]. Historical studies across this region have recorded multiple instances of warming air temperatures and declines in the ratio of snow-to-rain precipitation during the winter snowpack or spring snowmelt months for these watersheds leading to earlier snowmelt runoff in the snowmelt season [2,4-7]. The Snow Water Equivalent (SWE) of many of these western US watershed snowpacks has also exhibited a downward trend since the mid-twentieth century [3,8-9]. With an increase in evidence suggesting that these mountain watersheds are currently undergoing significant snowmelt regime changes in response to a warming climate, research has shifted towards modeling and forecasting potential future impacts of climate change on these systems [10-13]. The Snowmelt Runoff Model (SRM), in particular, has been used in over 100 river basin studies where snowmelt is a major factor in runoff [14]. This semi-distributed model uses the degree-day or temperature index method to calculate and calibrate daily snowmelt runoff volume, and includes a total of six parameters:

where Q is the average daily runoff, and are the runoff coefficients for snowmelt and rain respectively, a is the degree day coefficient which equates to snowmelt depth, T is the number of degree days, ΔT is the adjustment to the air temperature lapse rate, S is the ratio of snow cover area to total basin area, P is the total precipitation that contributes to runoff based on a critical temperature threshold, A is the area of the basin, k is the recession coefficient equating to the decline of runoff following snowmelt or rainfall, and n indicates the number of days in the model run sequence. Historical snowmelt and resultant streamflow may be simulated in the SRM, while a climate change scenario function further allows the forecasting of future snowmelt runoff and streamflow response for multiple river basins [15,16]. With historical analysis of snowmelt dominated river basins suggesting that warming temperatures are leading to a shift in the timing of streamflow in the snowmelt season, this paper will analyze how snowmelt and the resulting runoff volume may change in response to changes in the local climate for a typical small snowmelt dominated basin, the Animas River Basin at Durango, Colorado in the western US (Figure 1). The SRM requires daily historical climate data for one year to first calibrate the model, but may then be forced using seasonal climate projections spread across each day of the snowpack and snowmelt seasons. In order to calculate the snow cover depletion within the basin during the snowmelt period, the National Snow and Ice Data Center (NSIDC) provided Moderate Resolution Imaging Spectroradiometer (MODIS) snow cover imagery covering the basin at are solution of 500 m for a historical normal year (a year on record with minimal departures from average monthly temperature and precipitation levels) (Figure 2). The 2003 water year was chosen for calibration purposes as this year had the closest climatological match, in terms of basinwide air temperature and precipitation, with the historical mean values taken from 1950-2007. Following this, daily climate station mean temperature for the snowpack and snowmelt season months (Dec-Mar and Apr- Jul) and total precipitation for the snowpack season months, available from the National Climate Data Center (NCDC) for the same historical year, provided the initial input data for the SRM. Three climate stations provided the necessary basinwide coverage which divided the basin up into three different elevation zones. A further benefit of the SRM is that climate stations outside of the basin may be used through extrapolation of their measurements by elevation, as in this case (Table 1 and Figure 3). Calibration of the SRM took place by adjusting each of the model parameters until the modeled streamflow output fit the historical normal year output, based on the daily streamflow at the Durango stream gauge located at the basin outlet for the 2003 water year. The most crucial parameters requiring calibration included the runoff and recession coefficients, estimated by first calculating the ratio of daily precipitation to streamflow for the runoff coefficient, and then the streamflow from day n compared to day n+1 respectively for the recession coefficient. The extent of the snowpack at each time step estimated the rainfall contributing area parameter which assumed that all rainfall falling on the snowpack would add to the snowmelt runoff. Comparing the daily loss of SWE with daily air temperature at the Red Mountain Pass Snowpack Telemetry (SNOTEL) gauge provided initial estimations of the degree-day coefficient. Adjustments of these parameters then took place as necessary in order to account for over or under-prediction of snowmelt runoff during initial SRM runs. The lapse rate and critical temperature constants were initially left at their default settings of 0.65°C/100 m and 0°C respectively, while a 14 hour time lag provided the initial lag time based on the historical streamflow at Durango. Martinec and Rango [17] further provided a range of parameter values for subsequent calibration and adjustment. The SRM was calibrated using the Nash-Sutcliff (R2) and percentage difference (DV) values for determining model fit with the historical data: Figure 3: Climate stations and elevation zones used in the SRM.

Where is the measure of model efficiency, is the observed daily runoff, is the simulated daily runoff, Q’i is the mean daily runoff for the simulated time period, n is the total number of daily runoff values, simulated runoff, is the percentage difference between the observed and is the simulated runoff volume is the observed runoff volume, and future climate change scenarios of temperature and precipitation were applied from two gridded General Circulation Model (GCM) projections that had been downscaled to the Animas River Basin. These projections included the Climate Community System Model version 3 (CCSM3) and the Max Planck Institute for Meteorology version 5 model (ECHAM5) along with three Intergovernmental Panel on Climate Change (IPCC) greenhouse gas emissions scenarios A2 (high), A1B (medium) and B1 (low) (Table 2) [18]. The snowmelt runoff projections to 2050 and 2080 based on these downscaled GCM scenarios were then compared to the historical normal snowmelt runoff determined in the calibration process. 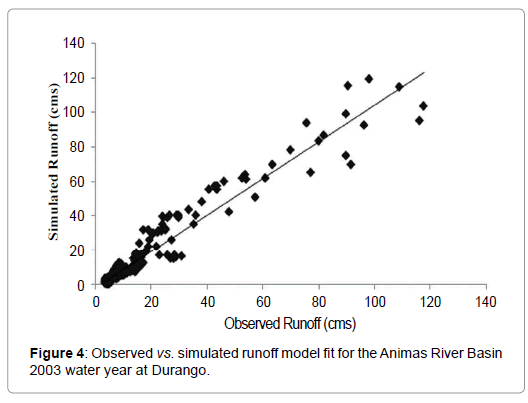 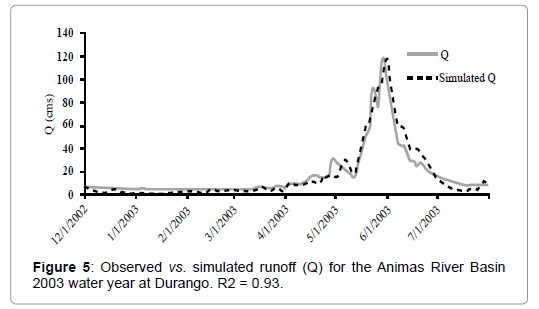 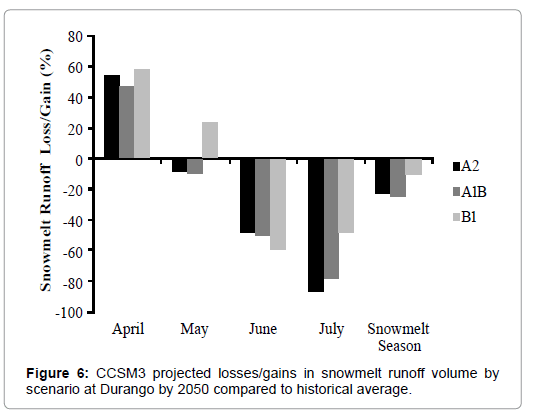 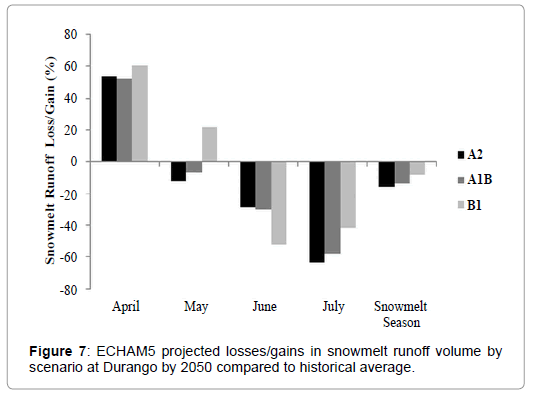 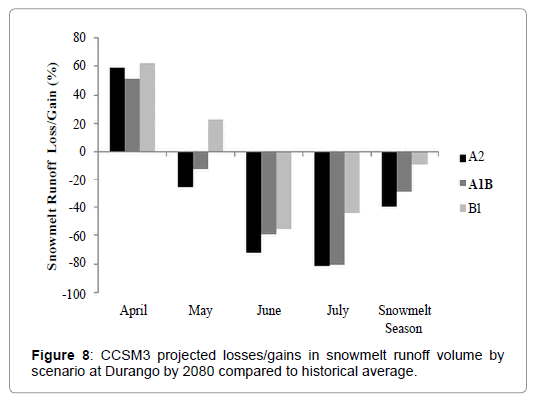 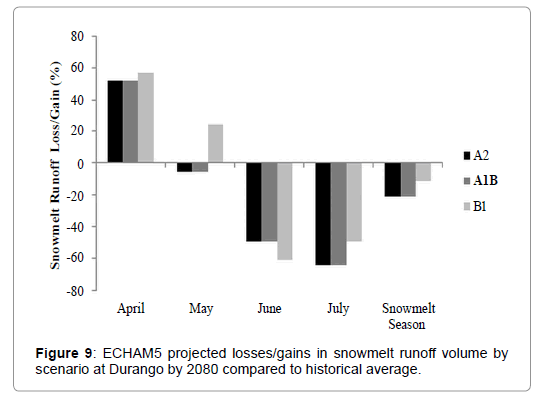 Using the snowmelt runoff model, SRM, it may be concluded that projected climate changes have the potential to drastically alter the timing and volume of basinwide snowmelt runoff over the course of the century. Regardless of scenario, warming temperatures and decreasing levels of precipitation will cause the snowmelt runoff to shift to earlier in the snowmelt season and reduce in volume overall. As air temperatures increase across the snowpack and snowmelt seasons, less precipitation falls as snow to be stored in the snowpack. This reduced snowpack then begins to melt earlier causing a shift in melt water production to earlier in the season from the historical late May to early June period forwards to April. The severity of these changes depends largely on the severity of the climate change scenario. Snowmelt runoff models coupled to GCMs have the potential to provide the best tools for monitoring and projecting the hydrological impacts of basinwide climate change for snowmelt dominated catchments. However, choosing the right tools for such an undertaking will be crucial in planning for future changes, and great care will need to be taken based on the availability of the data and the physical characteristics of each catchment in question. The SRM model has the ability to project changes in snowmelt runoff for basins of varying sizes, but may only be applied to basins that have the necessary historical physical data: climate data in the form of air temperature, precipitation and SWE; hydrological data in the form of streamflow and snowpack cover data in the form of basinwide satellite imagery. With the wider availability of these types of data for many snowmelt dominated catchments, especially across the western US, snowmelt runoff models like SRM may play a significant role in water resources management and planning towards climate change over the next few decades.

Copyright: © 2013 Andrew Day C. This is an open-access article distributed under the terms of the Creative Commons Attribution License, which permits unrestricted use, distribution, and reproduction in any medium, provided the original author and source are credited.
Top