Methods: We included a cohort of patients with diagnosis of early RA of less than 2 years of disease duration who not respond to MTX monotherapy, according to medical judgment, and added step-up combination with LEF. Data were collected every 3 months, including sociodemographic characteristics, functional status, disease activity and treatment. The primary outcome was the time to remission with the combined therapy, defined according to disease activity index of 28 joints (DAS28). Combination treatment failure was defined as not achieving remission. Time of outcome was assessed from date of the start of MTX plus LEF combination to date of remission or last follow-up. The Kaplan-Meier product limit method was used to estimate the probability of each outcome.

Results: A total of 106 patients were included. The median disease duration was 4 (IQR 2-8) months. Median followup was 34 ± 18 months (300 patients-year). Mean age was 50 ± 12 years and 83% were female. At the time of LEF addition, 95 (90%) of patients were not in remission. During follow-up, 47 (50%) achieved clinical remission at a median time of 8 months. The rest of the patients failed to achieve remission. The overall probability of remission per patients-months of follow-up was 0.49. Twenty seven out of 47 patients (58%) were still in remission at the last follow up visit (median follow-up after first remission=19 months).

Conclusion: In early RA patients with non-response to MTX monotherapy, the addition of LEF allowed to achieve remission in 50% of patients, at a median time of 8 months. Six out of ten of these patients were still in remission after almost 2 years of follow-up.

Rheumatoid Arthritis (RA) is a chronic rheumatic disease of unknown etiology. It is characterized by polyarticular and symmetric inflammation of small and large joints, which may be accompanied by systemic compromise. It affects from 0.2% to 2% of the caucasian population and having a maximum incidence between the fourth and fifth decade of life, it is the age group with the highest labor or productive capacity that is the most affected. The relation woman:man is 2-3:1[1].

When starting a treatment, it is extensively studied, that the objective of our intervention must be to achieve the remission of the disease or the low activity of it (treat to target). This tool must be complemented with strict control through validated activity indexes, and the treatment must be scaled in those that require it to achieve remission [2-13].

Methotrexate (MTX) should always be considered the first therapeutic option in patients who do not have contraindications for its administration. Multiple studies have shown that approximately 50% of patients who start MTX achieve control of the disease [2,14-17].

With the advent of biological therapies we have managed to give therapeutic options to many patients who did not respond to conventional therapies, but even so there is a significant number of patients who cannot access them or cannot receive them. In this context, before failure to MTX, another synthetic DMAR (Step-Up) such as Leflunomide (LEF) can be added [18-20].

Early diagnosis and treatment play a key role in the evolution of the disease [21]. Although the ACR20 response in patients with early RA and failure to monotherapy with MTX initiating Step- Up with LEF, is approximately 60%, there is a lack of evidence of the percentage of patients achieving remission by DAS28 with this combination [3,17].

In Argentina, many rheumatologists choose the first option to combine MTX with LEF. The LEF is an isoxazolic derivative. A pro-drug that after its administration is metabolized in the intestinal wall and in the first hepatic step to its active metabolite: malononitrilamida, also called A771726. The standard dose is 20 mg/day [3]. The combination therapy with MTX was not associated with a greater increase in transaminases, being the same safe and well tolerated [4,5].

The strategy of Step-up with LEF is studied in the established RA but it is not considered an option to be evaluated in controlled and randomized clinical trials. Its usefulness is not defined for early RA and there are no studies that evaluate the likelihood of remission with the combination. Given this situation we do propose the following objectives: to estimate the probability of clinical remission by performing Step-up with LEF in patients with early RA who are not responders to initial monotherapy with MTX and to estimate the time to achieve remission.

An observational and descriptive study of series of consecutive cases was carried out. Patients older than 18 years were included, belonging to the cohort of patients of the Argentine Consortium of Early Arthritis (CONAART) with a diagnosis of RA. The symptoms should last less than 2 years, and should have a lack of response to monotherapy with MTX according to medical criteria. Finally, they should have started additive treatment with LEF.

We excluded patients presenting concomitantly other connective tissue diseases according to clinical history (SLE, scleroderma, MCTD, among others) [6,7]. Evaluation and data collection was performed every 3 months, and included the following variables:

• Remission of the disease: evaluated by disease activity index of 28 joints (DAS28), which was defined as DAS28<2.6.

• Lack of response was defined as not achieving remission.

• Time to achieve remission was assessed from the date of the start of the combination of MTX plus LEF until the date of referral or last control.

For the descriptive analysis, the continuous variables were expressed as mean and standard deviation (SD), or median and interquartile range (RIQ) according to distribution and sample size. The categorical variables were expressed as a percentage. To assess the time to reach remission and the proportion of patients who achieved remission, Kaplan Meier survival curves were used. To analyze the presence of differences in the baseline characteristics of the patients who achieved remission versus those who did not, Cox regression analysis was used. The level of statistical significance will be set at alpha 0.05.

Table 1: Basal characteristics of the population.

Table 2: Basal characteristics of patients at the beginning of combination.

After 8 months of combined treatment, 47 of the 95 patients included (50%) were in clinical remission (Figure 1). The rest of the patients did not achieve remission. In a sub-analysis in which there were evaluated if there were differences in the baseline characteristics (at the time of initiating the combination) between the group of patients that reached remission and the group that did not reach it, no statistically significant differences were found (Table 3). The general probability of remission by patient-months of follow-up was 0.49. Twenty-seven of the 47 patients (58%) were in remission at the last follow-up visit; the median follow-up after the remission was reached was 20 months (RIC 3-29). 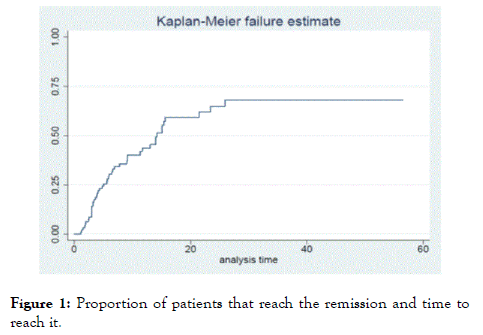 Figure 1. Proportion of patients that reach the remission and time to reach it.

Table 3: Basal differences between those who achieved the remission and those who continued in activiti with the combination.

The Step-Up with LEF in patients with RA is a valid strategy to scale up treatment in non-responders to MTX, but the evidence we have is scarce [20,22-24]. The few randomized clinical trials (RCTs) that analyzed it, do not use strict response measures such as referral by DAS28; they also do not have patients with early RA as a study population. Kremer et al. Published a randomized, double-blind, placebo-controlled study in which 263 patients with established RA non-responders to MTX were evaluated by randomization into two groups: MTX+LEF vs. MTX+Placebo. The objective was to evaluate the ARC20 response at 24 weeks and found that 46.2% and 19.5% reached it, respectively [17]. Subsequently, the same team performed an open extension of this study, which followed 90 patients with the combination up to 48 weeks, obtaining an ACR20 response in 52.2% of the patients [16]. Other studies of lower level of evidence, such as that of the team of SS Lee et al., which aimed to analyze the percentage of patients who achieved the ACR20 response. They evaluated, through a series of cases, 65 patients with established RA and MTX failure to which LEF was added. After 24 weeks, they reported that 71.6% of patients reached the target [15]. In the same way and with the same objective, John Londono et al. Published another series of similar cases that included 88 patients and obtained an ACR20 improvement in 76% of the cases [14].

The level of evidence is lower for studies that used more stringent response measures than ACR20, and those that reported remission results for DAS28 did so as a secondary analysis of their studies. T. Antony et al., in a clinical study, open, uncontrolled, aimed at the EULAR response to combination treatments. Of 84 patients with established RA included, 11 added LEF and reported that 90% had an EULAR response and 10% achieved remission [7]. Similarly, Pedro Iván Santos et al., In a cohort of 307 patients with established RA, set out to evaluate the effect of combined treatment through the DAS28 activity index. Of the patients included, only 40 received an LEF additive, who presented a median of DAS28 of 4.3 (4.1-5) in the baseline assessment and after 6 months of combined treatment reported a median decrease in DAS28 of 1.6 points (0.9-2.3), reaching a median of DAS28 for this group at 6 months of 2.8 points (2.3-3.4). The rest of the patients received combination with sulfasalazine or hydroxychloroquine, which obtained a similar response to the LEF group [19]. Regarding the evaluation of this therapeutic strategy in early RA, Grigorios T. Sakellariou et al published a retrospective study in 2011 evaluating 15 patients with early RA to whom LEF was added; they proposed to study the response by DAS28 in the presence or absence of factors of poor prognosis. They conclude that in the presence of factors of poor prognosis, the response to the combination is lower [18].

We are currently facing the absence of studies that aim to evaluate remission by DAS28 with the Step-Up therapeutic strategy with LEF in patients with early RA.

Trying to respond to this situation we have carried out our study, which although it has limitations and low level of evidence, is a work in which 95 patients with early RA were included, which were followed every 3 months with validated activity indexes, and with which we set out to evaluate what we all look for when starting treatment in these patients: Remission of the disease. After the analysis of the data, we observed that 50% of the patients not responding to MTX to which LEF was added achieved remission by DAS28, this in an average time of 8 months. These data support the results obtained by other researchers, suggesting that the Step-Up strategy with LEF is a therapeutic option that should be taken into account in patients with early RA. On the other hand, we observed that six out of ten of these patients were in remission at almost 2 years of follow-up, which means that with this combination it is possible to obtain prolonged remission over time. The main limitations of this study are:1) it is an observational study, 2) no control group, 3) The decision to add LEF was not made by preestablished criteria and 4) MTX failure (dose, route of administration and time) was by medical criteria.

In the early RA cohort studied, the clinical probability of remission of patients with a lack of response to MTX to whom LEF was added was 50%, and the mean time to reach remission was 8 months. On the other hand, we observed that six out of ten of these patients maintained remission at almost 2 years of follow-up. The use of conventional DMARDs remains the main therapeutic strategy for the treatment of early rheumatoid arthritis. Given the lack of efficacy with monotherapy (MTX or LEF), the combination of these results to be an effective and safe strategy to achieve the control of the disease, being able to obtain the remission of the disease in a large percentage of patients.

Copyright: ÃÂ© 2019 Carlevaris L, et al. This is an open-access article distributed under the terms of the Creative Commons Attribution License, which permits unrestricted use, distribution, and reproduction in any medium, provided the original author and source are credited.