Context: Circumcision holds a unique place in daily practice of urology. Heat cautery device is most common local technique used we found it can cause meatal stenosis and its sequels.

Aim: To determine the incidence, presenting symptoms of meatal stenosis and its relation to local traditional neonatal circumcision techniques among our children.

Settings and Design: This retrospectively study.

Newborn circumcision holds a unique place in daily practice of urology. Circumcision is primarily performed by non-urologists. It is traditionally undertaken as a mark of religious importance or for perceived health benefits such as improved penile hygiene or reduced risk of infection [1,2].

Circumcision, like other surgical procedures, has intraoperative and postoperative complications with rate varying from 1 to 15% [3,4].

The published literature has been shown that the daily practice of newborn circumcision in our culture as following, traditional circumciser or nurse performed the majority (70%) of circumcisions and 81% were done outside hospitals.

Concerning the circumcision techniques used in our study include only bone cutting (guillotine style) with using heat cautery or surgical knives to cut the prepuce while, other methods like (Mogen clamp) or device (Plastic rings) have not been used in our practice [5].

Heat cautery device is most common local technique used for non-therapeutic neonatal circumcision in our culture as it is a simple, low cost, easy to learn and perform and can be used to cutting prepuce and as hemostatic tool.

Heat cautery device is traditionally named Kawai, which is a modified instrument locally manufactured with a sharp metallic filament at its end converting electric energy to heat the filament so that it is used as a cutting diathermy (Figure 1) [5]. 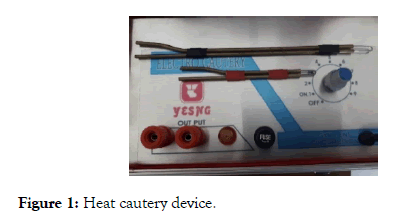 Meatal stenosis (MS) is a one of late and potential complications of male circumcision that occurs in 5-20% of boys circumcised during infancy or childhood [6,7].

Meatal stenosis is a narrowing of external urethral meatus which anatomically defined as a meatus diameter less than 5Fr and visually defined as distortion of meatus shape and location from oval shape, extends from apex of glans downward to frenulum to narrow pin point shape, situated at apex of glans penis, which are currently accepted diagnostic tools Figure 2 [8,9]. 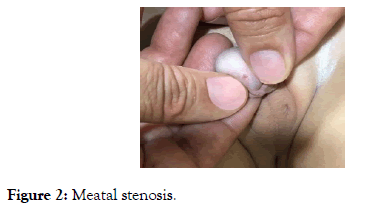 The cardinal symptoms of MS are narrow high velocity stream, penile pain at initiation of micturition, which can masked in diaper, and boys often presented after toilet training, However MS can be asymptomatic.

Up to our best knowledge ,this is first publish study focusing on meatal stenosis as a remote complication among our children following ritual neonatal circumcision ,sharing our observations with others regarding prevalence, clinical presentations of MS and its relation to traditional techniques of circumcision used in our culture.

After obtaining approval statement from local ethical committee of our hospital. A retrospective study was conducted over period of two year from June 2015 to June 2017, on children visited outpatient clinic of pediatric surgery for urology problems or other complains (hydrocele, inguinal hernia, gastro intestinal disease ,etc ) accompanied by their parents.

Of 213 consecutive children involved 150 (70.4%) had been circumcised during infancy period. Outside medical institutions using local traditional techniques and met our exclusion criteria (history of urethral surgery or instrumentations, congenital anomalies of urogenital tract, circumcision cases done for medical reasons, circumcision done three months before examination , parents not remember method and place of circumcision and history or diagnosed cases of dysfunctional elimination syndrome) were recruited in the study.

The children were examined carefully with focusing on genital region, done by treating physician, and the criteria for diagnosis of MS were based on visual inspection of pinpoint shape meatus and inability to pass a 5-Fr feeding tube into urethral meatus.

Analysis of data was carried out using the Statistical Packages for Social Sciences- version 25 (IBM Corporation). The significance of difference of different percentages were tested using Pearson Chi-square test (2-test) with application of Yate's correction or Fisher Exact test whenever applicable.

The incidence of MS which was significantly higher (P=0.037) among group of patients circumcised with heat cautery n:54 (43.9%) in comparison with group circumcised with other method n: 6 (22.2%).

Forty-six child (76.7%) were symptomatic and 14 child (23.3%) are not reported symptoms and diagnosis of MS had made incidentally during physical examination for unrelated pathology. The symptoms and ultrasound findings outlined in Table 1.

Blood urea and serum creatinine were elevated in two patients and within normal range for rest of subjects.

Dipstick urinalysis shown microscopic haematuria in 5 (8.3%) patients, pyuria in 9 (15%) and bacteriuria in 4 (6.6%) patients, where their urine culture revealed growth of E.coli.

Voiding cystourethrogram (VCUG) was performed in 4 patients (4/6) in whom ultrasound showed bilateral hydronephrosis and bladder wall thickening but no vesicoureteral reflux, 2 patients their families were refused to do VCUG.

Meatoplasty were done for all children and 53 (46 symptomatic and 7 asymptomatic). Parents’ consent had taken as we believed that MS can be associated with late complications (bladder wall thickness, obstructive uropathy, recurrent UTI, etc).

Meatoplasty done under general anesthesia was performed as day case surgery and children were followed up for 12 months. Post -operative visits were done at 1,3,6 and 12 months. Both parents and children satisfied with urine flow, symptoms relief and no recurrent cases of MS documented.

The published literatures showed a wide range in incidence of MS following neonatal circumcision, which can range from 0.9% to 23% and may be higher in areas where circumcision performed outside health institutes by unqualified persons using local techniques for circumcision [3,11,12]. A recent population – based epidemiological study from Denmark 1977-2013 has been provide evidence that risk of MS is increased at least six – fold after non-therapeutic circumcision with 95% confidence interval particularly in boys less than 10 year-old [7].

In contrary a Meta -analysis study published by Morris et al. containing data on MS following circumcision at any age and long-term follow up window was not considered in his systemic review, concluded that risk of MS less than 1% after circumcision was low [13].

Meatal stenosis following neonatal circumcision has not addressed well in our clinical practice. As parents not get attention to urination of their children and most of time physician treated symptoms of MS (UTI, enuresis and dysuria) and not focusing on shape of meatal orifice and caliber of urine flow.

In our study, the incidence of meatal stenosis was 40 % (no.60) and significantly higher among the group circumcised using heating cautery device (P=0.037), as it can cause an uncontrolled vascular and tissue damages resulting in various degree of burns, edema, ischemic damage to penile tissue and lately meatal stenosis and scar formation around glans penis.

In contrary Makhlouf et al. studied (n.518 boys) was stated safety of using heating cautery for circumcision, the drawbacks of their study was mean age for circumcision was 3.31 ± 2.33 years and no long term follow up [14].

The relationship of heat cautery and MS has explained by the effect of heating on tissue, heat cautery increases the potential for more tissue reaction and results in electrical injury to frenular artery that may predispose to MS.

The chemical and mechanical traumas may be not responsible for MS post neonatal circumcision as it is absent in boys with hooded prepuce [15,16].

Meatal stenosis has varied presenting symptoms in published literatures, 23.4% (n.14/60) of our studied group diagnosis of meatal stenosis was done incidentally in agreement with Joudi et.al. As they reported asymptomatic meatal stenosis following neonatal circumcision in more than fifth of their patients (n. 27/132), high lights the importance of long-term follow up genital examination in all children who had circumcised during neonatal period [9].

Narrow -upward deflection of urinary stream and dysuria are most common presenting symptoms in our patients in agreement with others [10,17].

Two patients had febrile UTI with obstructive- uropathy (bilateral Hydroureteronephrosis and distended bladder) as their meatal stenosis were missed at initial visit. Therefore, we need to stress on meatal examination.

In our study, ultrasound findings (Hydronephrosis, bladder wall thickening) were found in 18 (30%) patients. Ultrasound revealed resolving the hydronephrosis and hydroureter in 5/7 patients. While, bladder wall thickening doesn’t resolve in short term, this attributed to the late presentation of MS (1-13 year) post neonatal circumcision and long time before parents seeking medical care both factors can lead to prolonged time till resolution of urinary tract changes.

On follow up visits, the elevated renal indices and urinalysis normalized within one month after operation.

Patient history, physical examination, and witnessed voiding all can be used as determiner of treatment success. Uroflowmetry might add objective parameters for the assessment; however, it is unnecessary since it does not change the management [19].

Limitations in this study were the retrospective design of the study and a small number of control group was including.

In conclusions, meatal stenosis is a late complication of nontherapeutic neonatal Circumcision. A narrow- upward urine deflection is a common symptom of MS. obstructive uropathy was an occasional manifestation of MS. It is significantly higher among children circumcised using heating cautery. We advise to use heat cautery cautiously and to inform parents about longterm association between heat cautery device and MS.

Copyright: © 2020 Abid A. This is an open-access article distributed under the terms of the Creative Commons Attribution License, which permits unrestricted use, distribution, and reproduction in any medium, provided the original author and source are credited.