Peritoneal adhesions prevalence after major abdominal procedures has been evaluated at 63%-97% [2]. Postsurgical adhesions have four major negative impacts on health care outcomes. First, adhesions cause significant morbidity, including intestinal obstruction, infertility and pelvic pain. Second, adhesions are associated with multiple surgical complications. Third, these complications lead to greater surgical workload and utilization of hospital and other health care resources. Fourth, all these negative impacts result in significant economic burden to society [3,4]. Diabetes mellitus (DM) is one of the most common metabolic disorders in the world. The diabetes-associated healing impairment is characterized by a decreased inflammatory response, amount of fibrin, collagen synthesis, tensile strength, angiogenesis, and altered production of cytokines [5-7]. Many studies showed that high glucose concentration inhibits wound healing process associated with prolonged inflammatory phase, defected angiogenesis and diminished fibroblast proliferation [8-10]. Allium sativum (Garlic), of the Liliaceae, has been used as both a nutrient and in folk medicine for centuries. The antibacterial, anti-inflammatory, antithrombotic, fibrin lytic, antioxidant, and wound-healing properties of garlic have been well-documented in previous studies [11,12]. The bioactive components of garlic are mainly responsible for the healing properties [13]. The claimed health benefits of chemical constituents present in garlic that treat various disorders have been investigated in both in animals and humans [12]. It has been reported that the major action of garlic is attributed to its sulfur-containing compounds [14].

Diabetes was induced in rats of three study groups using alloxan (Sigma). Rats were left fasting for 18 hours with free access to water. A single dose of 120 mg alloxan/kg/BW was dissolved in normal saline and administered intraperitoneally to lightly anesthetized rats (with ether). The extent of diabetic induction was monitored after 24 h, based on blood sugar levels using a glucometer and strips (Roche Diagnostics GmbH, Mannheim, Germany). The animals were considered to have diabetes if blood glucose was >280 mg/dl for 2 consecutive days. At regular time intervals, blood samples were withdrawn from the tail vein. The blood glucose was measured and animals were considered diabetics if blood glucose was >280 mg/dl for 2 consecutive days [15].

Surgical operations were performed for all forty rats of groups C, D, E and F under maximal aseptic conditions and under the effect of light anesthesia [15]. Animals were secured to the operative table with average room temperature (23-25°C) in a supine position and the animal’s abdomen was scrubbed with polyvinyl iodine.

A 3.5 cm surgical incision was made and the cecum was exteriorized and the serosa of the cecum was rubbed with a gauze sponge until punctuate hemorrhage occurred. Thereafter, the cecum was placed in its abdominal location and a 1 cm2 right-side parietal peritoneum incision was made on the anterior abdominal wall and was sutured by four stitches using vicryl 4-0 [14]. At the end of the procedure the abdomen was closed in double layer in a continuous method (muscle and peritoneum with 3/0 catgut sutures, and skin with 3/0 silk sutures [15]. All operative groups received post-operative wound care, housing in separate cages, feeding, cleaning, and antibiotics in their drinking water (0.1% amoxicillin and 0.015% enrofloxacine) for five days.

Data of all groups were studied using the statistical program of social science version 12 (SPSS Inc., Chicago, IL, USA). Differences between experimental groups were tested using ANOVA and chi square tests. The statistical significance of the data was determined by P value (P<0.05 was considered significant).

Table 2: Scales for macroscopically evaluations of adhesion formation based on Canbaz’s scoring method. Adhesions were macroscopically according to their extent and tenacity.

The injured terminal ileum and cecal walls with fibrous adhesions were excised to confirm adhesion formation. The specimens were fixed in 70% alcohol, dehydrated and embedded in paraffin wax. Sections were cut at a thickness of 4-5 μm and stained with haematoxylin and eosin (H&E), or Masson trichrome (MT). Immunohistochemical processing was performed using monoclonal mouse anti-vimentin and anti-podoplanin (D2-40) antibodies. The expression of immunohistochemical parameters ware classified by two independent blinded observers, using a semi-quantitative immunoreactivity score (IRS). The extent of staining was scored as 0 (0-5%), 1 (5-30%), 2 (30-80%) and 3 (80-100%), indicating the percentage of positively stained cells of the area in the section. 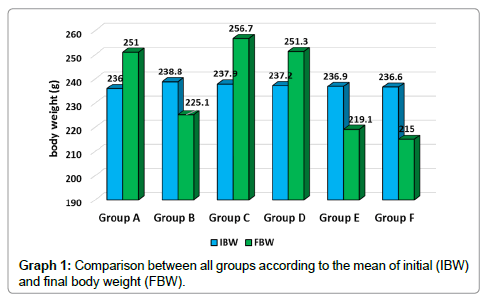 Graph 1: Comparison between all groups according to the mean of initial (IBW) and final body weight (FBW).

Results are given in Graph 2 and Figure 1. 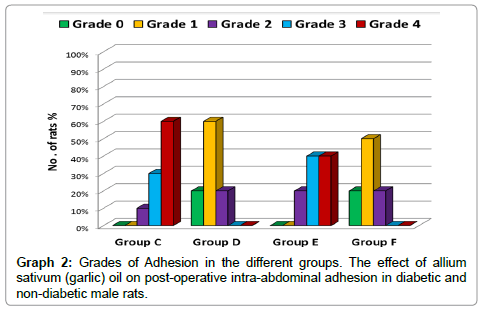 Graph 2: Grades of Adhesion in the different groups. The effect of allium sativum (garlic) oil on post-operative intra-abdominal adhesion in diabetic and non-diabetic male rats. In control groups (A and B), 100% of the rats had no adhesions. Group C showed the most severe adhesions in all variables, followed by group E without significant statistical difference. Gross appearance of adhesions in groups D and F indicates formation of different degrees of filmy, transparent, avascular fibrous adhesions which extend to adjacent organs.

Moderate infiltration of inflammatory cells, Figure 2 accompanied by vascular proliferation (VP) in the fibrous structure without formation of foreign body giant cells were observed in biopsies of group E compared with those of Group C (Figure 3). The garlic treated groups D and F exhibited positive immunoreactions (Figure 4) to D2-40 antibodies within the cells of the mesothelium. No significant increase in D2-40 positive cells was seen in the saline treated groups C and E (Figure 5d) compared to control groups A and B (Figure 5b). On the other hand, garlic treated diabetic rats showed significant increase in D2-40 expression compared to diabetic rats treated with normal saline (Figure 5f). Cells stained with vimentin as a marker of its mesenchyme origin were statistically significant with higher expression in adhesion areas of the saline-treated groups C and E (Figure 5c) compared with the garlictreated groups D and F (P<0.001) (Figure 5e).

The detection of mesothelium cells as an indicator for reperitonealisation showed no difference between the D2-40 staining values of group C and group E, but the difference between group D and F was statistically significant (p<0.001). 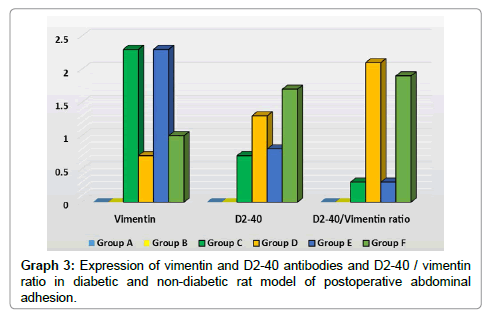 The present study examined the effect of intraperitoneal administration of 5 ml/kg/BW garlic oil in preventing postsurgical adhesion in a rat model. After intervention we noted significant reduction of body weight in diabetes induced groups. This finding was expected as weight loss is one of the cardinal manifestations of diabetes, especially if it is untreated. Intraperitoneal route was more effective in reducing postoperative adhesions compared with oral routes in most of previous studies [17-20]. Possible advantages of intraperitoneal route include formation of a barrier between peritoneal surfaces and a direct effect on the local inflammatory process [20,21]. The adhesion induction rat model used in this study was proved to be very successful in terms of inducing a maximum inflammatory response and dense adhesion induction [22].

Saline solution has been evaluated for its ability to prevent peritoneal adhesion in several studies, but the results were controversial. Some studies have reported that saline solution prevents peritoneal adhesion by lowering the inflammatory response and removing fibrin, while, other studies did not show any reduction of adhesion severity with saline solution [17,18,23,24]. The present study revealed a statistically significant higher degree of adhesion in saline-treated animals than in garlic oil-treated groups.

Maximum adhesion formation in the form of multiple multinucleated giant cells and foreign body granulation tissue reaction occurred at the site of surgery and mainly around the vicryl suture knots. This is in line with Elkins et al., who found that the densest adhesion and most severe inflammatory reaction occurred around the surgical knots [25].

Garlic oil applied to surgical regions caused least fibrosis, lesser amount of inflammatory cell infiltration and no vascular proliferation in compared to the normal saline-treated non-diabetic groups. The decrease in inflammatory cell infiltrate can be taken as an index of garlic anti-inflammatory effect. The decreased fibroblast migration is assumed to lead to better wound closure, less fibrosis, and a lesser amount of scar tissue [27].

The anti-inflammatory properties of garlic and its components have been reported in many other studies [12,28]. Garlic exerts anti-inflammatory effects by inhibiting oxidative stress-induced activation of nuclear factor kappa-B (NF-kB) which is the major factor involved in the expression of pro-inflammatory enzymes such as (nitric oxide species) NOS and cyclooxygenase-II [12]. Garlic oil also inhibits production of T-helper cells and inflammatory cytokines [29]. Diallyl thiosulfate (a component of garlic oil) increases corticosteroid levels and thereby acts as an anti-inflammatory and immunomodulation agent [12,29,30].

The present study also revealed that the reduction in adhesion scores (inflammatory cell infiltrate, neovascularization and fibrosis) was significantly greater in non-diabetic groups compared to the diabetic groups.

Oviedo-Socarrás et al. reported similar results, and concluded that the diabetic environment greatly altered the healing response in most of the analyzed parameters [31].

The current study indicated that garlic oil might alter the local repair process. Enhanced accumulation of inflammatory and mesenchyme cells in the saline-treated groups almost disappeared in garlic oil treated groups. This resulted in improving ratio of mesothelium cells to vimentin expression and indicate enhancement of reperitonealisation with a reduced mesenchyme infiltrate.

The preventive effect of garlic oil may be due to the anti-inflammatory effects of its component or to its barrier effect. The garlic oiltreated non-diabetic group showed lower, but insignificant effects compared to those of garlic oil-treated diabetic group which were improved regarding histological parameters. The net effect may not be linked only to the anti-inflammatory effects of garlic oil but, it is likely to be related to many other mechanisms. However, the following three mechanisms could be involved in exhibiting this effect:

(1) An increased healing process due to its antimicrobial, anti-inflammatory and immunomodulation effects.

(3) The inhibition of the inflammatory process resulting from the reduction in leukocyte adhesion and proinflammatory cytokines.

The current study revealed that garlic oil is effective in reducing postoperative adhesions in both non-diabetic and diabetic rats, but there was a limited effect on the non-diabetic group regarding histological parameters compared to the diabetic group. Further experimental researches are needed particularly to test the best anti-adhesive dose of garlic oil and the possible mechanism in diabetics.

Copyright: © 2016 Ali SN, et al. This is an open-access article distributed under the terms of the Creative Commons Attribution License, which permits unrestricted use, distribution, and reproduction in any medium, provided the original author and source are credited.
Top