International Conference on Neuroscience and Psychiatry

Conclusion: Bipolar patients have complete early emotional recognition, and their emotional abnormalities exist in the late evaluation of emotional stimuli, mainly occurring in the frontal and parietal areas.

• There is no difference in the average amplitude of P300 across the three groups – BD, SZ, and HC; BD triggers a larger amplitude of late positive potential (LPP) than the other two groups.

• BD has higher valence and arousal on neutral stimuli than the other two groups.

Two psychiatrists divided subjects into two groups of 26 people each according to their DSM-IV diagnosis, as shown in Table 1. All subjects are right-handed and have no neurological disease, persistent loss of consciousness, or major illness. The healthy subjects have no history of head injury, family history, no alcohol or drug dependence, and no disorders. Written informed consents were signed on the day of the experiment. Emotional symptoms were tested in the BD group: mania symptoms were assessed using the Young Mania Rating Scale and depression severity was assessed using the Hamilton Depression Rating Scale (HAMD). Seven subjects (five in the BD group, one in the SZ group, and one in the normal group) were excluded from offline analysis as they had significant selection biases in behavioral data.

A Passive Viewing Paradigm was adopted as the experimental paradigm and presented in E-prime 2.0. Thirty face photos (angry/happy/neutral) and 30 emotional pictures (unpleasant/ happy/neutral) were displayed and repeated once. A total of 360 trials were conducted. The experiment consisted of four blocks, and the ABBA design was used to exclude the order effect. After each block, the rest time was determined by the subject, with a maximum pause of 2 minutes. The experimental flow is shown in Figure 1. After the EEG test, subjects were asked to rate their levels of valence and arousal for the emotional stimuli. According to Visual analog scales (VAS), the subjects used the mouse to select the percentage level (leftmost 100, middle 50, rightmost 0) indicated on a horizontal bar. Prior to the experiment, 10 trials were conducted to confirm participants’ understanding of the process and the experiment then commenced [8]. 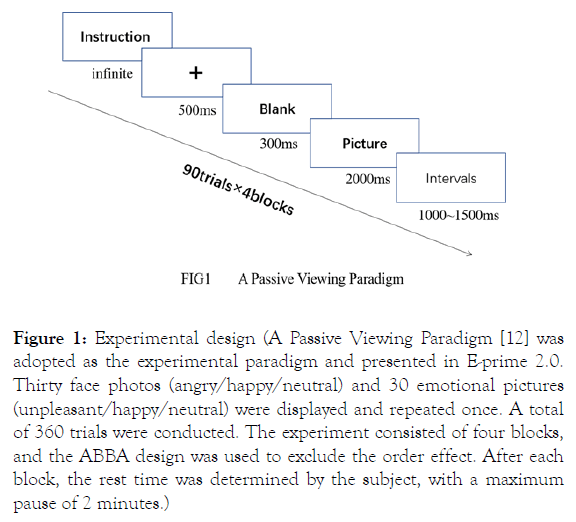 Figure 1: Experimental design (A Passive Viewing Paradigm [12] was adopted as the experimental paradigm and presented in E-prime 2.0. Thirty face photos (angry/happy/neutral) and 30 emotional pictures (unpleasant/happy/neutral) were displayed and repeated once. A total of 360 trials were conducted. The experiment consisted of four blocks, and the ABBA design was used to exclude the order effect. After each block, the rest time was determined by the subject, with a maximum pause of 2 minutes.)

The experiment was conducted in a comfortable room with hospital lighting and soundproofing. The distance between the screen and the eyes of the subject was 1m, and the stimuli were presented in the center of the screen.

In the passive viewing paradigm, the EEG is acquired by a 64- channel EEGOTM EE-211 amplifier, a 64-channel Ag/AgCl electrode cap, and the EEGOTM system of the ANT Neuro BV (Enschede, The Netherlands). The electrode impedance was less than 5kΩ; the A/D Rate was 1000Hz; the reference electrodes were GND and CPz; eye electricity was not recorded. In the offline analysis, the average of M1, M2 was used as a reference point. The filtering standard was 0.1~30Hz, 24 slope [dB/oct]. Software-specific algorithms were used to correct ocular artifacts. The default artifact removal was ±100μV, and the total number of trials of subjects exceeded 80%. A segment of data from -200 to 2000ms was selected. In accordance with previous studies [9-11], Fz, Cz, Pz, CP1, CP2, PO3, and PO4 were selected to measure the average amplitude and latency of ERP for the study of LPP. The time window was 400~1000ms. For all analyses, a Greenhouse-Geisser correction was applied to p values where appropriate.

As seen from the total average map (Figure 2), significant P300 and LPP were induced in certain parts of the brain in both groups. Significant slow wave (LPP) peaks caused by different groups of subjects were significantly different between approximately 400 ms and approximately 1000 ms. Figure 2: ERPs for all four conditions (the blue line is Negative, the green line is positive, the red line is neutral).

No other effects of interest were significant.

The most important finding of this study is that in the frontal and parietal areas, the mean amplitude of the LPP induced by BD patients was greater than that of normal and schizoid patients, and there was no difference in the mean amplitude of P300. Thus, our hypothesis is validated. The P300 volatility is related to the allocation of attentional resources [6,12,13]. The results indicate that the attentional resource allocation of the BD group was good and the emotional perception might be complete. However, related studies have found that BD patients with episodes had reduced P300 amplitude under negative stimulation. Since this contradicts our experimental results, further verification is required. In addition, in the valence rating, when viewing face images, the BD’s valence score was higher than those of the control groups. This result is consistent with the LPP volatility results but does not match the P300 volatility results. The results of this behavior are in line with the rating results of Degabriele [14], which found that the BD group had higher positive valence and arousal ratings on neutral stimuli. It should be noted, however, that compared with the normal group, the BD’s higher scores were not only on a single neutral stimulus but on all face images, which may be related to patients ’ emotional state. Therefore, we believe that bipolar patients have a certain degree of emotional processing disorders, which are characterized by sustained attention and processing of emotional stimuli and increasing LPP amplitude at late stage.

This study found that all three groups demonstrated similar LPP amplitude, but there was a difference in terms of the frontal and parietal areas. The BD group induced a larger LPP amplitude, perhaps because the initial emotional perception involved the occipital lobe, and the late emotional processing brain areas are mainly subcortical or cortical-marginal systems. Moratti, Saugar, and Strange also ascended to the parietal and frontal cortex, and believed that to be the basis for the production and maintenance of LPP [14]. However, other studies have traced LPP production and maintenance back to the visual attention area in the back of the brain [15].

In addition, we found that with both positive and neutral stimuli, the BD’s P300 latency was later than the normal group, while there was no significant difference in the LPP latency between the BD and normal subjects. The study believes that the classified stimuli increased the latency of the P300, which is the time required for the P300 latency to depend on classified stimuli. Therefore, the prolongation of the BD’s P300 latency may be related to the greater attention paid by BD patients to the stimulation. There was no difference in LPP latency between BD and normal patients. The LPP demonstrated high and low sensitivity to the arousal of stimuli, indicating the similarity of the arousal between the BD and normal groups. However, the results of behavioral arousal ratings do not support this.

The comparison of the average amplitudes of P300 and LPP demonstrate that there was no difference in the P300 amplitude between groups but the LPP differed across groups. The LPP represents the persistence of late emotional processing of attention, meaning that LPP can better reflect emotional processing disorders than P300.

In this study, no hemispherical lateralization effect was observed in either the average amplitude or peak latency of the LPP. Previous studies [15] suggest that lateralization is related to emotional valence, where the left brain is more sensitive to positive stimuli and the right brain to negative stimuli. Other studies, such as a study of phobia [16], have also suggested that lateralization is generally associated with individual differences in gender, disease, etc. However, the lateralization effect has not been reported consistently, and this is still the case in the passive viewing paradigm, so the hemispheric effect should be reported cautiously. For example, one study by Horan et al. [12] reported that normal people had higher LPP in the left brain than in the right regarding the stimulation of valence, but the lateralization effect was not found for the LPP amplitude of schizoid patients. Similar findings have also been mentioned in Cunningham [17]. These results match the neuropsychological model of processing positive emotion with approach motivation, but whether it is approach or avoidance motivation for negative stimuli remains controversial [18,19]. For instance, recent studies have demonstrated that anger is an approach motivation with more stimulation in the frontal cortex in the left hemisphere than in the right hemisphere. However, the hemispheric effect was not found in the LPP in this study. The lateralization may be related to motivation. It may indicate that the stimulation was not sufficiently strong in the passive viewing paradigm and thus led to the subject ’ s strong approach or avoidance motivation. Further study of the hemisphere lateralization effect is still required.

Emotional stimuli are commonly used to trigger LPP. Many studies have demonstrated that emotional stimuli and neutral stimuli can induce different LPP. For example, positive and negative stimuli usually trigger larger LPP waves in a sequence task that presents positive-neutral-negative stimuli. In previous research, Cacioppo et al. found that emotional stimuli can increase the amplitude of LPP and can arouse the organism if the strength is sufficiently strong, as neutral images do not have this effect. Later studies have continued to confirm that positive and negative pictures as well as words can cause large LPP amplitudes compared with neutral pictures and words [19].

This study has a number of limitations. First, it used different diagnostic criteria and different measurement standards for the stabilization phase and episodes, which might inevitably affect the screening of subjects. Moreover, this study only investigated the emotion paradigm of BD subjects during manic episodes (highly-emotional group) to explore the mechanism of late emotional processing. Future research can conduct a comparative study of multiple emotional states of BD patients, such as patients that are highly-emotional, depressed, and in remission [3]. Additionally, considering that the use of psychotropic drugs may lead to cognitive dysfunction, it is necessary to control or monitor the use of test drugs in the experiment in future studies, as Degabriele [14] mentioned that it was important to monitor the effects or influence of psychotropic drugs.

The following conclusions can be drawn from the above discussion:

(1) BD patients have emotional processing disorders, which are characterized by sustained attention and processing of emotional stimuli and increasing LPP amplitude of the frontal and parietal areas.

(2) The volatility of P300 does not differ from normal people, meaning that early emotional processing of BD patients is complete.

This research is financially supported by funds from the zhejiang provincial natural science foundation of China (Code: LY15H090017). The funder has no influence over the design, data collection, analysis or publication of this study.

Availability of Data and Materials Section

The datasets used and/or analysed during the current study are available from the corresponding author on reasonable request.

Copyright: © 2019 Zhou Q, et al. This is an open-access article distributed under the terms of the Creative Commons Attribution License, which permits unrestricted use, distribution, and reproduction in any medium, provided the original author and source are credited.

Sources of funding : This research is financially supported by funds from the zhejiang provincial natural science foundation of China (Code: LY15H090017). The funder has no influence over the design, data collection, analysis or publication of this study.