Langerhans Cell Histiocytosis Presenting with Central Diabetes Insipidus in an Adult: A Case Report with a Discussion on Differential Diagnosis, Diagnostic Work up and Treatment

Langerhans Cell Histiocytosis Presenting with Central Diabetes Insipidus in an Adult: A Case Report with a Discussion on Differential Diagnosis, Diagnostic Work up and Treatment

Langerhans Cell Histiocytosis (LCH) is rare in adults; the condition affects 1-2 patients per million annually in the general population. Diabetes Insipidus (DI) is a common manifestation of Langerhans Cell Histiocytosis (LCH) although its reported frequency varies in different series. The pathogenesis of the condition is not precisely understood. Infiltration of the hypothalamic-pituitary axis by Langerhans-like cells has been reported in 50% of autopsied patients. Central Diabetes Insipidus (CDI) can be familial, idiopathic or secondary and is a disorder characterised by polyuria, polydipsia and formation of hypotonic urine.

Langerhans Cell Histiocytosis (LCH) is rare in adults; the condition affects 1-2 patients per million annually in the general population [1]. Diabetes Insipidus (DI) is a common manifestation of Langerhans cell histiocytosis (LCH) although its reported frequency varies in different series. The pathogenesis of the condition is not precisely understood. Infiltration of the hypothalamic-pituitary axis by Langerhans-like cells has been reported in 50% of autopsied patients [2]. Central Diabetes Insipidus (CDI) can be familial, idiopathic or secondary and is a disorder characterised by polyuria, polydipsia and formation of hypotonic urine. This results from an inability to synthesize or secrete vasopressin in the neuro-hypophyseal system. Secondary CDI, which is the most common form of this disorder, is caused by infection, trauma, tumours, and infiltrative disease among other processes [3]. We report a case of an adult male who presented with polyuria, polydipsia, nocturia and headache and was confirmed to have CDI after a water deprivation test. Magnetic Resonance Imaging (MRI) of the pituitary gland was suspicious of a primary infundibular lesion with thickening and enhancement. Due to complaints of arm and hand weakness with jaw pain, an x-ray of the mandible showed near complete destruction of the right mandible. This prompted a Positron Emission Tomography-Computed Tomography (PET-CT), which showed destructive and metabolically active lesions in the mandible and scapula. A biopsy of the lesions confirmed Langerhans Cell Histiocytosis.

A 46 years old male who was a self-employed project manager with a background history of hypertension and asthma for which he was taking irbesartan and clenil inhaler respectively. He was a non-smoker who rarely consumed alcohol. He was referred to the Endocrine service with a 3 weeks’ history of polyuria, polydipsia, nocturia and occasional headaches. On initial screening, diabetes mellitus and hypercalcemia were excluded with a normal HbA1c and Serum Adjusted Calcium level respectively. His serum sodium level was 144 mmol/L (135-144) with a serum osmolality of 300 mOsm/Kg (275-295). A diagnosis of Diabetes Insipidus was suspected. Subsequently a water deprivation test was arranged, which revealed a serum osmolality 313 mOsm/Kg with a urine osmolality 172 mOsm/Kg (300-900) at the start of the test. This was followed by 6 hours of polyuria with a Urine Output (UOP) in the range of 200-400 ml/hour and recorded weight loss of 3 kilograms (Kg). Following administration of 2 microgram intramuscular desmopressin (DDAVP), the urine osmolality increased to 573 mOsm/Kg and the Urine Output (UOP) fell below 100 ml/ hour. The results of this test were discussed at the departmental Endocrinology results meeting and it was unanimously concluded that this is in partial CDI. The patient was commenced on oral DDAVP 100 micrograms twice daily which resulted improvement in the urinary frequency and resolution of the nocturia. To elicit a cause for CDI, a MRI scan of the pituitary gland was arranged, which revealed thickening and enhancement of the entire infundibulum extending into the upper surface of the pituitary gland. These appearances were thought to be of a primary infundibular lesion (Figure 1a and 1b). The differential diagnosis at this point was between neurosarcoidosis, hypophysitis, lymphoma and metastases (less likely). Apart from evidence of secondary hypogonadism, anterior pituitary hormone profile was unremarkable. Results are summarized in Table 1.

A short synacthen test revealed cortisol T0 364 nmol/L and T30 849 nmol/L. This was a normal response; as following synacthen administration the cortisol level increased more than 190 nmol/L to a level above 540 nmol/L. Computed Tomography (CT) of the thorax, abdomen and pelvis was done to look for evidence of lymphoproliferative disease, visceral malignancy and sarcoid granulomas however the results were entirely normal. Figure 2 is a CT image from the thorax showing absence of mediastinal lymphadenopathy. Figure 2: Contrast-enhanced CT thorax in axial view. There is no evidence of lymphadenopathy.

In a routine clinic follow up review the patient mentioned 2 months history of left arm and hand weakness together with right-sided jaw pain. This had been worsening gradually and was at a stage where this discomfort was affecting the quality of life. Clinical examination revealed left upper limb power to be reduced to 3/5 with brisk reflexes and extensor plantar response bilaterally. XR orthopantomogram was arranged and the patient was referred to the neurology clinic. The XR orthopantomogram, to our surprise, revealed significant destruction of the right mandible shown in Figure 3. Figure 3: An XR orthopantomogram depicts the destruction of the right mandible.

A PET-CT was arranged which revealed destructive and metabolically active lesions in the mandible and left scapula shown in Figures 4a and 4b. 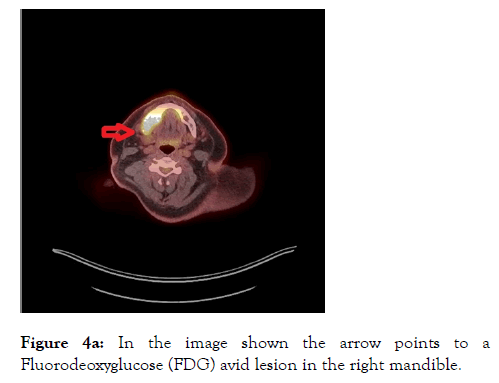 Figure 4a: In the image shown the arrow points to a Fluorodeoxyglucose (FDG) avid lesion in the right mandible.

Figure 4b: In the image shown, the arrow points to a Fluorodeoxyglucose (FDG) avid lesion in the left scapula.

At this stage, Langerhans cell histiocytosis and Erdheim-Chester disease were considered as a potential explanation of this presentation. Biopsy of the mandible, unexpectedly, revealed histology consistent with malignant melanoma. The patient underwent right-sided selective neck dissection, subtotal mandibulectomy and reconstruction with a fibular flap under maxillofacial surgery. The intraoperative samples were sent for histology which was again reported as metastatic melanoma. At this stage, after discussion at the skin multidisciplinary meeting, a second opinion was sought on the histological samples and this time it was felt that this is not keeping with malignant melanoma. Immunohistochemistry showed CD1a positive cells and the patient was diagnosed with LCH. He was then referred to medical oncology for chemotherapy and from an endocrinology standpoint; his symptoms were well controlled on oral DDAVP at the dose of 200 mcg at 6 am, 50 mcg at 2 pm and 200 mcg at 10 pm.

LCH is more common in children, with a peak age at presentation of up to 3 years. The incidence is 3-5 cases per million per year [4]. Adult LCH is uncommon and rare with a prevalence of 1-2 cases per million. LCH in adults can develop at any age, but the mean age at diagnosis is 33 years [5]. The Hypothalamic Pituitary System (HPS) is involved in 5%-50% of childhood cases of LCH and 14% of adult patients with LCH. CDI is the most common manifestation of endocrine dysfunction and usually develops within a year after the diagnosis of LCH [6]. CDI can also be the first presenting symptom of LCH [6,7] as was the case with our patient.

Diabetes Insipidus (DI) is a syndrome characterized by the excretion of abnormally large volumes of dilute urine. In conditions where patients are consuming fluids to thirst, the 24- hour urine volume exceeds 50 mL/kg body weight, whereas the specific gravity and osmolality are less than 1.01 and 300 mOsm/kg of water, respectively [8]. Hyperglycaemia, hypercalcaemia and hypokalaemia should be excluded as a cause of polyuria. When a case of DI is suspected, the initial step involves the confirmation of the presence of hypotonic polyuria, which is the hallmark of DI. Once hypotonic polyuria is established, the next step is to identify the type of polyuriapolydipsia disorder (Central DI versus Nephrogenic DI versus Primary polydipsia). This can be determined through a water deprivation test. Baseline urine osmolality of <300 mOsm/Kg and an increase in urine osmolality by >50% from baseline following DDAVP administration confirms CDI [9]. Once CDI is confirmed, it is prudent to explore the cause. CDI typically occurs due to reduced synthesis or release of Arginine Vasopressin (AVP) from the HPS and can happen due to a variety of reasons which include pituitary surgery, craniopharyngioma, infiltrative infundibular lesions, traumatic brain injury, subarachnoid haemorrhage, congenital hypothalamic-pituitary defects, autoimmune disorders, and Wolfram syndrome. MRI of the hypothalamic-pituitary region is a very useful step in the investigation of patients with CDI. Not only because the hyperintense signal generated by a normal neurohypophysis on T1-weighted images is absent in this condition, but also because the precise images that it reveals of the median eminence, infundibulum and anterior pituitary have provided a great deal of clarity with regards to the various causes of this condition. Before the widely adopted use of MRI pituitary in patients with CDI, in many instances, no abnormality of the hypothalamic-pituitary region could be detected by CT scanning, and most cases were therefore labelled as idiopathic. In other instances, the presence of tumours, infiltrative process (histiocytosis and sarcoidosis), infectious pathology and autoimmune disease, gave rise to other more precise diagnoses [10]. Structurally, infundibular enlargement is the most commonly seen hypothalamic-pituitary abnormality in LCH and was always associated with DI. This has been described by numerous studies in the past [11-13]. The MRI pituitary gland features in the case described here in the context of LCH are consistent with those noted in prior studies. Some other hypothalamic-pituitary abnormalities that can be seen include pituitary enlargement, partial or empty sella and hypothalamic involvement [10]. Treatment of CDI involves administration of DDAVP. If the patient is unable to take the oral preparation then subcutaneous, intravenous, intramuscular and intranasal routes can be used to administer DDAVP. Treatment should be tailored to symptoms and patients should be counselled to limit fluid intake to a minimum, 1 hour before and up to 8 hours after desmopressin administration. Electrolyte levels, in particular sodium, should be monitored periodically until levels stabilise and patients are established on DDAVP therapy. Common side effects include hyponatremia (in the case of DDAVP therapy without restricting fluid intake) and nausea [14].

CDI can be caused by several conditions and therefore these cases should be approached with a broad differential diagnosis in mind and a systematic approach is then required to delineate the cause. LCH is commonly seen in children and adolescents, however, as this case highlights it can be seen in adults. LCH is a rare and probably underdiagnosed disease with a broad disease spectrum. Due to the infiltration of the hypothalamic-pituitary axis, CDI can be the first manifestation, even before LCH is diagnosed. Therefore, LCH should be considered in the diagnostic workup of CDI.

Copyright: © 2021 Shah N, et al . This is an open-access article distributed under the terms of the Creative Commons Attribution License, which permits unrestricted use, distribution, and reproduction in any medium, provided the original author and source are credited.