Labia minora reduction has gained more prominence in the recent decade and more women are seeking professional opinions. Unfortunately only a few studies have researched the long-term specificity and functional assessment endpoints. This study was a retrospective questionnaire study where we asked about complications, symptoms, labia sensitivity, influence on sex-life and patient satisfaction. Even though the general patient satisfaction was high, complications such as pain (23%), hematoma (11%) infection (9%) and healing problems (6%) were common. 36% experienced a change in sensitivity; less feeling/ numbness as the main complaint. Sex-life was reported to be better in 59%, while 39% experienced no change. It is important to know about possible complications and changes in sensitivity after reduction of labia minora. It is the responsibility of the consultant to inform women seeking operation in order to facilitate a well-informed decision.

Surgical reduction of labia minora has gained more attention in the recent decade [1]. Surgery only for cosmetic reasons is forbidden by law in Denmark, but still an 11- fold increase in referrals to public gynaecologic clinics has been observed between 1996 and 2010 (data from Danish Health and Medicines Authority).

Generally, there are three major surgical techniques to reduce labia minora [2]: longitudinal resection, wedge resection and deepithelisation. Studies to date have not been able to indicate any differences in results after these three surgical techniques. In Denmark the longitudinal resection method is favoured (www.dsog.dk: guideline: labiareduktion 2011).

At present, there are no national or international guidelines for reduction of labia minora. Surgery thus relies on the evaluation of the consultant and the women’s symptoms [3,4], but the decision making is complicated by the subjective physical and psychological reason, that also drives women to seek this operation [5-9]. The lack of uniform objectivity and the patient`s subjectivity induce heterogeneity in evaluation of indication for surgery and operative results and potentiate the risk of suboptimal outcome measures. Clearly, evidence based guidelines would help to facilitate that surgery is reserved for women truly helped with surgery with a minimal risk of harm in this delicate area. In this process, it is important to define what is the range of normal of the labia majora and minora, and different endpoint or classifications has been proposed [2,5,10-12]. Further, it is important to know the complications and success rates following such operations. To date there are only a few studies on the subject matter, published in English, which have long term specificity and functional assessment endpoints. Especially knowledge about sensitivity and consequences for women’s sex-life is missing.

The aim of this study was therefore to examine complications and the general satisfaction after reduction of labia minora in short and long term assessed by a questionnaire, including questions about sensitivity and sex-life.

The study was based on a retrospective questionnaire sent out by mail. The approval for the study was given by the Danish Data Protection Agency (July 18th 2012, J.nr. 2012-41-0748). Patients were identified in hospital records by the diagnosis code for labia hypertrophy (DN906) combined with the operative procedure code for the vulva region (KLFC00/KLFC96) at the Odense University Hospital or Sønderborg Regional Hospital, between January 1st 2000 and November 31st 2012. In this way 87 women were included. To obtain the highest possible feedback, the questionnaire was designed short and simple with nine multiple choice questions. The questionnaire included reasons (physical, psychological, cosmetic) for seeking the operation and how the results met expectations. In addition, questions were asked about complications and symptoms (infection, wound healing, haematoma, pain) that did or did not result in admission to the hospital. To assess the long term satisfaction rates, women were asked questions about labia sensitivity (less, more, changes) and influence on sex- life. Furthermore, a general assessment was asked to be completed on a scale from 1-10; and whether the woman would recommend this operation to another. For the statistics Excel has been used.

The study group consisted of 87 women in the age range 12 to 61 years; 29.5 years in average. Follow-up time between the operation and the questionnaire was between 4 and 153 months; 68 months in average. Sixteen women received unilateral labia resection, 71 bilateral, and all were performed as day surgery. One patient was lost to follow up due to low IQ, and another 7 were lost to follow up due to missing personal data. Seventy nine women were sent a questionnaire in the mail and 47 answered after the first attempt. The remaining 32 were sent a second questionnaire, and of these, 7 answered. There was a completed returned questionnaire for 54 women (68%) (Figure 1). 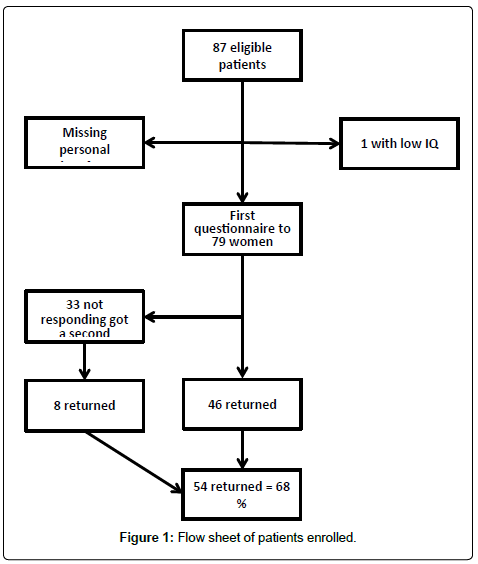 Forty nine subjects (92%) answered that they sought treatment due to physical reasons while 17 (32%) answered psychological and 24 (45%) cosmetic reasons (Figure 2A). Seventeen (32%) answered that they had one or more complications. The most frequent complication was pain (23%), hematoma (11%) infection (9%) and wound healing problems (6%) (Figure 2B). For 3 women (6%), admission was necessary and 2 women (4%) were re-operated because of bleeding the same day as the primary operation. Twenty women (36%) answered that they had experienced changed sensitivity after the operation. Of these, 60% had less feeling, or numbness, as main complaint; however 21% reported more sensation (Figure 2C). Eighty- nine percent thought the precipitating factor for wanting the operation was eliminated by the operation, or else became better, 9% thought it was not changed, and 2% thought it was worse. Sex-life was reported to be better or much better in 59% of the women, while 39% experienced no change, and 2% experienced worsening (Figure 2D). Ninety one percent answered that they would recommend the procedure to another. General satisfaction was a scored average of 7.7. Three women got a second surgery of the labia in a different clinic and at least three more are considering this as well. 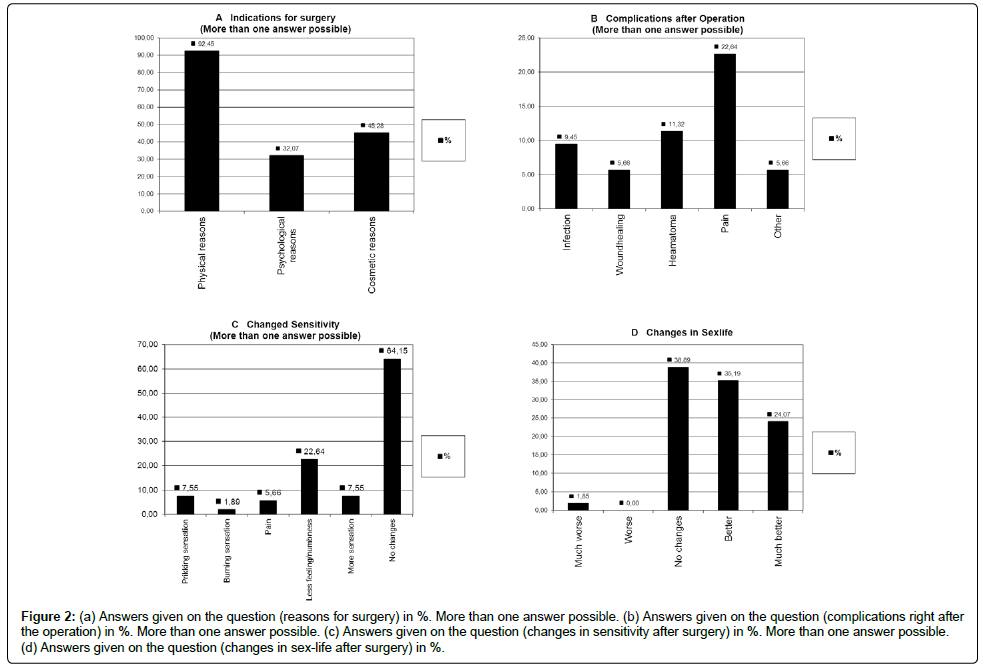 The primary aims of earlier published studies focused on comparing specific operation methods of labia majora reduction. All studies had high patient satisfaction and low complication rates. It is also evident from these studies, that independent of the different operative methods, a high patient satisfaction is associated with labia size and personal perceptions of the labia. Our study did not focus on operative methods, but on general complications and satisfaction both short and long term.

Patient demographics in this study were comparable to the other larger studies [5,7,13,14]. This applies to both age, average age, and whether the operation was uni- or bilateral. Reasons for obtaining the operation were also comparable in the light of the restrictions in Denmark with respect to labia reduction for cosmetic purposes.

Similar to findings in earlier studies, our results showed that women in general are satisfied with the procedure. A percentage of 91% that would recommend the operation to another is comparable to previous findings (92-100%) [14]. It is difficult to compare symptoms and complications as many studies used only healing and satisfaction surveys as endpoints [13]. In these larger studies, pain was a well described symptom. Frequency of pain symptoms varies greatly from 1% (13) to 64% (10), which is believed to be caused by the inherent difficultly in assessing subjective pain. Postoperative infection has seldom been described or reported in larger studies [14]. In two studies, prophylactic antibiotics were used [8,15]. This seem to be the only significant difference from our study where 5 women required antibiotic treatment following surgery.

Our study, unlike few of the larger studies, included questions about postoperative sensitivity of the labia and long term effect on sex-life. Gress et al. reported that none of their subjects had developed problems with sexual stimulation, while 35% had increased sexual excitability [15]. Alter et al. reported that 28% described changed sensitivity: either positive (23%) or negative (5%) and 71% experienced improvement of their sex-life while for 24% there was no difference [13]. Both of these studies had a general satisfaction of 9.4 and 9.2, which is significantly higher than 7.7 in our study. This might invite speculation of superiority of the different operative methods compared, the difference in follow-up intervals, or reporting bias. Sensibility takes many months to recover which may influence the overall assessed satisfactory levels. A strength in our study is the average follow-up time of 68 months. A high rate of completed questionnaire return rates (68%) is another obvious strength and the combination of a long follow-up time, a high rate of returned questionnaire and specific questions about sensitivity and consequences for sex-life is unique for our study. Our data are collected from two different hospitals, with different surgeons, but probably with only minor differences in procedure technique as the longitudinal resection method is generally favoured in Denmark. However, the possibility of minor differences can be seen as a limitation of our study.

In conclusion, reduction of labia minora has experienced increased interest among women within the last years. Even though the method is generally met with satisfactory results, operative complications such as pain, infection, bleeding and hematoma can occur. The most substantial finding in our study is the long term changes in sensibility. Our result underlines the responsibility of the consultant to inform women about the natural variation in labia anatomy plus the risk of complications and long term results of this surgery. Only after weighing subject matters thoroughly, can women be expected to be enough wellinformed for optimal decision making.

Copyright: © 2015 Messerschmidt L, et al. This is an open-access article distributed under the terms of the Creative Commons Attribution License, which permits unrestricted use, distribution, and reproduction in any medium, provided the original author and source are credited.