Isolated Paleomagnetic Component and its Dating from the Malha Formation, Southwestern Sinai, Egypt

Isolated Paleomagnetic Component and its Dating from the Malha Formation, Southwestern Sinai, Egypt

The age of Malha Formation that located at Gebel Sarbut el-Gamal in the southwestern Sinai is a controversial point, due to the absence of index fossils. Therefore, 125 oriented core samples have been collected for paleomagnetic investigation to determine the age assignments of this formation. Rock magnetic experiments revealed that, the hematite is the main magnetic carrier within the studied rocks. Analysis of the demagnetization data isolated a single primary component of magnetization with D=351°, I=36.2° with α95=3.7° and the corresponding pole lies at lat.=77.8°N and long.=257.4°E. The calculated paleomagnetic pole has been found to be primary and enforced, suggesting the age of Malha Formation to be (Aptian-Albian). For the reliability of the obtained pole, a comparison with the published corresponding poles of Cretaceous age in Egypt was done.

Many authors have attained different conclusions about the age of Malha Formation; Jurassic based upon the presence of Middle Jurassic miospores; Neocomian based upon well preserved palynomorph assemblages, which consist mainly of spores and pollen grains in the kaolin-bearing Malha Formation, and Aptian-Albian based upon the stratigraphic relationships [1-9]. In addition, the studied ferruginous sandstone is considered by the Geological Survey of Egypt [10] and Moustafa [11] on their maps as Triassic Qisaib Formation. On the contrary, the Egyptian General Petroleum Corporation and Conoco [12] drew these successions as Malha Formation of Aptian-Albian age (Figure 1). The present study tries to solve the problem in age controversy of these successions by a paleomagnetic investigation to determine the correct age assignments. Figure 1: Location and Geological map of the study area (modified after the Egyptian General Petroleum Corporation and Conoco [12]).

Nubian sandstone ranges in age from the Cambrian to Upper Cretaceous eras below the first major marine transgressive during the Upper Campanian Duwi Formation [7]. It consists of mainly continental sandstones with thin beds of marine limestones, and marls. The Nubia sandstone now is classified into different rock units, where the Aptian-Alpian in Western Desert occurs within upper part of Sabaya Formation and lower part of Maghrabi Formation based upon palynology styudies [13]. The Malha and the Risan Aneiza Formations are part of the Nubian Sandstone group that rests unconformably on the basement rock units [14].

The term “Malha Formation” was first introduced by Abdallah et al. [5] for the multicolored and fluvio-marine sandstone with interbeds of clay at Wadi Malha, at the western side of the Gulf of Suez. According to Said [15], the thickness of the Malha Formation in the north Eastern Desert varies greatly from one place to another, Formation varies from 40 to 100 m in West Sinai, to 250 m in East Sinai, and to more than 1000 m in the subsurface of North Sinai.

Samples have been collected from 6 sites of different lithologies at the surface outcrops of Malha Formation at Gebel Sarbut el- Gamal at latitude 29°08’15”N and longitude 33°13’25”E (Figure 2). The number of samples differs from one site to another, ranging between 3 and 5 hand blocks. Hand block samples have been cut into total of 125 oriented core specimens using a drilling machine at the Paleomagnetism Laboratory of the National Research Institute of Astronomy and Geophysics (NRIAG), Helwan, Egypt. Samples were oriented using magnetic compass. The magnetic susceptibility was measured before the demagnetization process and also after the selected heating steps, using Bartington Susceptibility meter (MS2B), in order to monitor any mineralogical alteration in the specimen during thermal demagnetization.

Analysis of the demagnetization data was carried out visually; using the stereographic and orthogonal projections and statistically; using the Principal Component Analysis (PCA) for each specimen to determine the characteristic magnetic component(s) [16,17]. The obtained components, from each site, were gathered and the respective site-mean direction was calculated. The overall mean directions, as well as the virtual geomagnetic pole (VGP) position were computed using Fisher statistics for each locality [18]. Data processing was done using Rema soft program.

Rock magnetic experiments showed that, hematite is the main magnetic mineral in almost all the studied specimens:

Figure 3 represents an example for the IRM curves. As shown, the magnetization in the studied specimen did not reach the saturation state until 1000 mT, indicating the presence of hard magnetic mineral(s). The same specimen was subjected to back field curves experiment, in order to identify the coercivity of remanence. As we can see in Figure 4, the existed magnetic mineral is of high coercivity value, of about 400 mT. This hard magnetic mineral of high coercivity could be hematite and/or goethite. Hysteresis loop curve in Figure 5 shows that, no saturation state was reached, indicating the presence of hematite as the main magnetic carrier. Studying the magnetization against temperature (thermomagnetic curves) Figure 6 reveals that, the Curie the temperature value of the existed magnetic mineral is about 650°C. Such a high value of Curie temperature characterizes the hematite mineral. This mineral could carry a stable magnetization within the investigated specimens [20-25]. 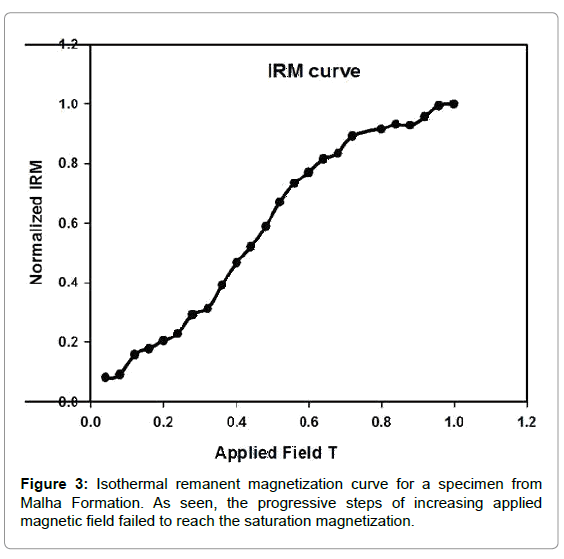 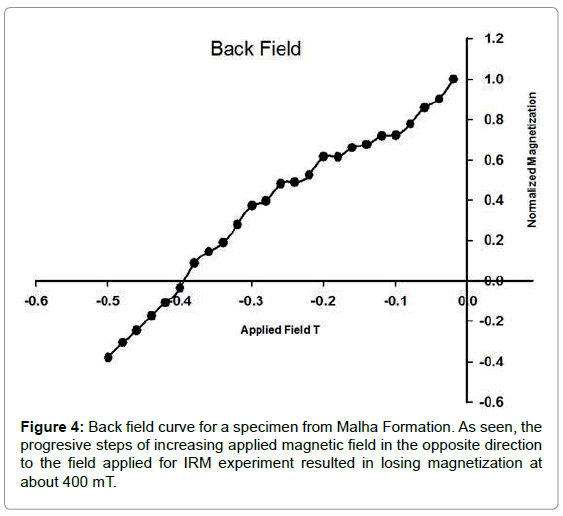 Figure 4: Back field curve for a specimen from Malha Formation. As seen, the progresive steps of increasing applied magnetic field in the opposite direction to the field applied for IRM experiment resulted in losing magnetization at about 400 mT. 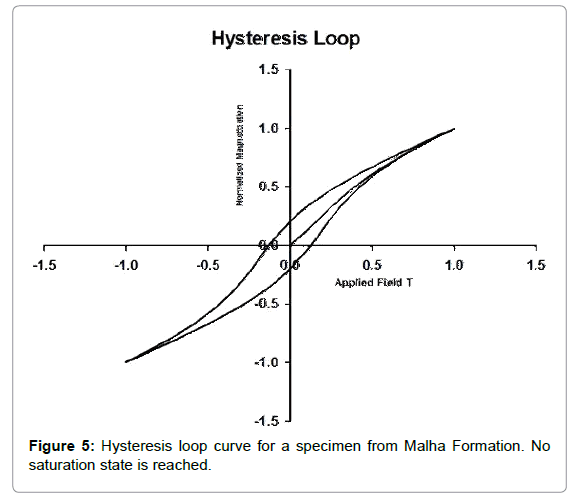 Figure 5: Hysteresis loop curve for a specimen from Malha Formation. No saturation state is reached. 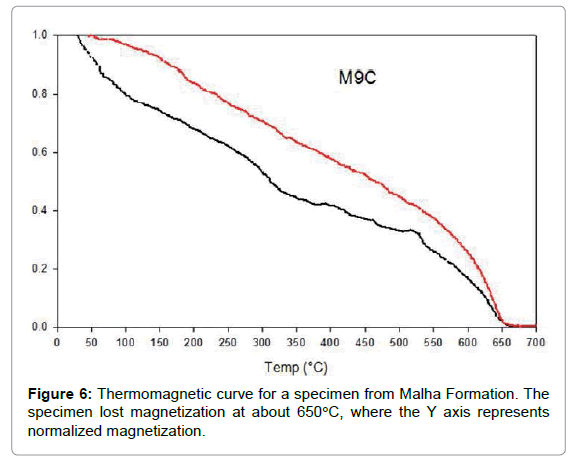 Figure 6: Thermomagnetic curve for a specimen from Malha Formation. The specimen lost magnetization at about 650°C, where the Y axis represents normalized magnetization.

Demagnetization process relied mainly on the thermal demagnetization, as the AF demagnetization failed to isolate the characteristic magnetic component, due to the presence of hematite, as the main magnetic mineral. As expected in the study of sedimentary rocks, the intensity of remanence was low of around 2.0 × 10-3 A/m. Also, the values of magnetic susceptibility for the studied specimens were low around 5 × 10-6 SI units. As shown in Figure 7, the intensity of NRM decreased gradually during successive demagnetization steps till around 650°C, where about 90% of the remanence was removed. Zijderveld diagram showed that a straight line pointed toward the origin, indicating single component of stable magnetization. Also, an abrupt change in the susceptibility values was noticed, indicating the change in the mineralogy during demagnetization steps (Figure 7). The site-mean values of the obtained components that resulted from the demagnetization process of the studied specimens were calculated and tabulated in Table 1. In the Geologic Time Scale Figure 8; the base of Aptian age is found to be reverse magnetization and this agree with results of the present work shown in Table 1 where the component of the site (M1, M2 and M3) are (-ve) at the base of Malha Formation and the upper three sites are of (+ve) components indicating that the Malha Formation started deposition at the very beginning of Aptian age [19]. 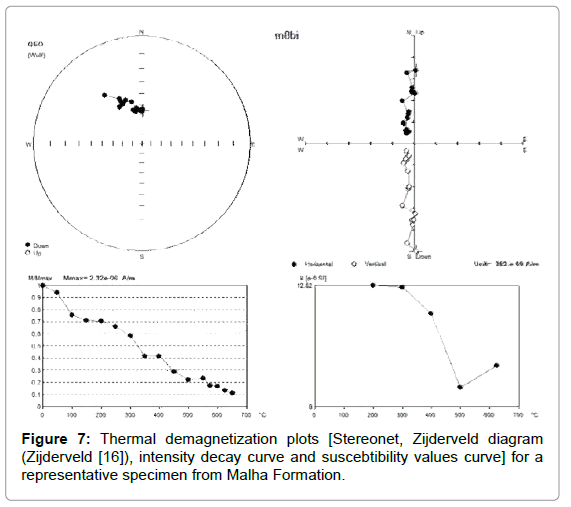 The paleopole position obtained in this study, agrees with the Cretaceous paleomagnetic poles obtained in Egypt (Table 2 and Figure 9) [26-29].

Figure 9: Previous obtained Cretaceous poles of Egypt with the pole of the present study.

Table 2: Selected Cretaceous paleomagnetic poles of Egypt, with the pole of the present work.

Copyright: © 2016 Khashaba A, et al. This is an open-access article distributed under the terms of the Creative Commons Attribution License, which permits unrestricted use, distribution, and reproduction in any medium, provided the original author and source are credited.
Top