Reconnaissance mapping and core drilling for subsurface limestone deposit investigation in Mbiabong Ukwa area and environs was carried out using a hybrid but simple rotary core recovery rig- GX-Y-1. The reconnaissance was done in a way that reasonably covered the whole area of interest in either direction (East to West, North to South). Fresh samples were randomly chipped out of the outcrops in-situ at about 50-100 m distance except where there is outcrop exposure of special interest. A base Map projection of Nigeria, Map Grid:- Datum: WGS-84, 1984 (NAD-83); Zone: 32 (UTM-32 Northern hemisphere) was used in all work undertaken for this Mineral Resource evaluation. Drilling was planned and set-out using the local grid at 1 km along strike and 200 m dip wise. Recovered core log were sequentially boxed into core boxes, lithologically assayed and tape measurements of litho strata imported into Rockworks 16 software environment for interpretation.

Economic mineral deposits are the basement for sustainable economy and industrial development. The ability to identify their various locations, nature of occurrence and quantity is vital for rapid development. Availability, accessibility and their management accounts for the wealth of a nation. Many persons, including foreign partners are not always aware of where mineral resources are located. To venture into the mining is a high-risk activity. The exploration for minerals is but one step in the mineral supply process that provides mineral products to the society [1]. Exploration forms the spectrum of quantitative and qualitative geosurveys used to aid problem-solving and increase the quality of strategic management decisions. It ensures that the available information from sampling analysis is sufficient to allow a reliable estimate of the size, (tonnage) and grade of mineralization. Science and technology are used in exploration in an effort to reduce the risk [2]. Adams reminds us to focus on developments that will provide our organizations with competitive advantages [3]. Woodall provides insight into the mix of technical and human inputs necessary to exploration success. This process has both technical and economic dimensions [4].

Exploration itself consists of a series of stages that, if successful, move from concept to gainful mine operation [5]. The objective of each exploration tool is then to provide specific discovery information upon which meaningful exploitation decisions can be made, at minimum cost [6]. Whether exploration be for preliminary assessment, feasibility or advanced stage project evaluation or due diligence that can lead to industrialization and development, core drilling provides the essential tools. Core drilling has the potential to make confirmatory contributions to the mineral supply process through baseline ore reserve estimation. With the increasing needs and to support industrialization and development, right quantification of the available mineral resource using core drilling in all aspects of mineral resource development is a prerequisite.

The mapped area is within the Southern Benue trough, east of Arochukwu and to the west of Calabar. The beds belong to the southeastern Nigeria portion assigned to the Odukpani Formation dated Cenomanian – Turonian Age in the Calabar flank. The sediments are lateral equivalent to the Asu river group. It is alternating sequence of arkosic sandstones, limestones and shales which gradually are more shally in its uppermost parts [7]. The stratigraphic record of sediments indicate late Cenomanian – Turonian marine depositional first sedimentary cycle. These were subsequently reworked by later tectonic activities leading to structural deformation that left behind it crosscutting faults and other features.

The study area lies in the Northern parts of the Cross River basin. It is bounded by longitudes 588,550–598,550E and latitudes 391,996–401,996N. The geographical area is to the west of Calabar, Southeastern Nigeria (Figure 1). It belongs to a Coastal tropical rainforest zone. Most of the area surveyed at the time of investigation is a virgin forest with trees above ten meters, climbers and shrubs. Each of this form a layer of canopy. There are abundant palm trees. Monthly total rainfall in millimetres noted over 19-year period reveal threshold value of <0.5 for a rainy day and of 50.0 mm. The total annual mean rainfall in the area is among the highest in Nigeria being about 2859.84 mm [8]. The methodology utilized in this study includes field reconnaissance and detailed petrological examination of core litholog sections. A total of forty-two (42) representative core drill holes were sunk. Surface geological mapping prior to the core drilling for the subsurface investigation was done. Subsurface investigation followed the plotting of pilot core drilling cordinates on base maps, imputing them into GPS and subsequently locating them on the field. Core drill points follow resource mineralization of interest trend after surface mapping plots on the base map.

Control core holes were sunk along the mineralization strike direction at 4 km apart and 200 m apart on the traverse of the control core holes (i.e. across the strike or along dip) (Figure 2). Coring on these points depends on prevailing condition of the immediate environment on field. Some of the points that fell on difficult terrains such as water logged and steeply slopes were repositioned but not to more than 50 m away from the proposed position. Drilling was completed on such a variable spacing and at depths between 19.5 to 115 m. GX-Y-1, 16 hp rotary rig with a diamond impregnated bit attached to core recovery barrel is used. A 0.065 m diameter core was produced from a 0.0777 m diameter hole using IEX-size diamond bits. Water is used for the drilling fluid to avoid contaminating the core sample. Groundwater pumping test was conducted. Depths to groundwater table in the cored holes were measured repeatedly at intervals. This helps to understudy groundwater condition and movement in the environment. Occasionally there are vugs/sparry cement, fractured breccias, intraclastic mud (gouge in-fillings) and splitting of the core wedge in the core barrel. It was necessary to pull out the drill stem and clear the core from the barrel before continuing the drilling repeatedly at every 3.66 m drilling except if wedging occurred earlier to this. All samples recovered were boxed prior to geostatistical analysis. 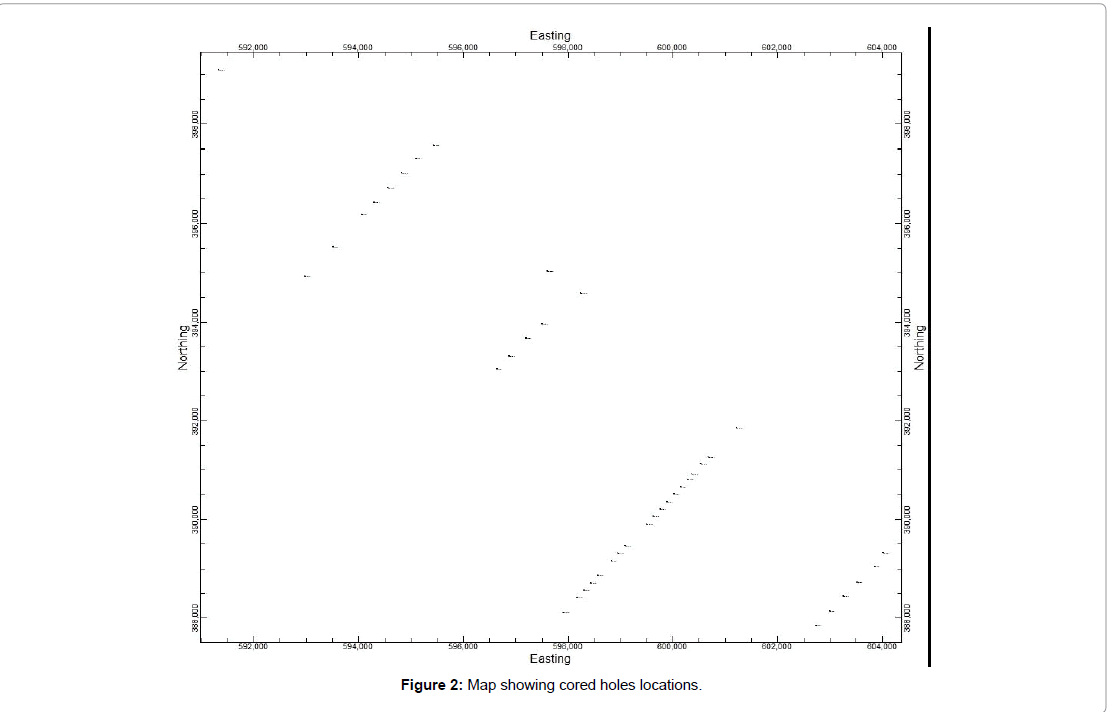 The reserve window in this study is the area within the inferred boundary or the economically viable belt.

The polygonal method in which the core litholog data of the representative drill hole is used to estimate the reserve in an area. Using the core log of the boreholes description as a guide, the reserve window of the limestone occurrence is put at ZK3 N-11, ZK1 So 10, ZK5 So 7, ZK9 So 9 to ZK13 So 3 on one trace and at ZK3 No 1, ZK9 So 0 to ZK13 So 3. This formed a polygon with 16 km length and 2 km width, making 32 sq. meters. The mineralized section has limestone core litholog reporting various bands’ thickness ranging from about 0.05 m to 19 m.

D=density of limestone; the reserve estimate is made.

Forty-two (42) borehole cores were logged and analyzed, thirtytwo (32) yielded high-calcium interbedded limestone bands of various thicknesses at different depths. Bands having considerable limestone bed thickness of ≥ 0.5 m with strip ratio of at most 3:1 were used as economical representative and used for the reserve estimate. The core logs analysis show that mineralization in the area is laterally and vertically heterogeneous. The heterogeneity is in bands thicknesses, number in cyclic sequence and geochemistry. This spatial anomalies makes reserve estimation difficult especially the geochemical aspect. However, the mineralization window were able to be inferred. The boundary is inferred using the last productive border core drill holes or an outstanding last outcrop exposure. These are used to infer the lateral boundary of the study area (Figure 5). At Mbiabong I traverse, seven core holes were drilled. Highcalcium outcrop beds were recovered in five core holes. They were all economical with ZK3 N-9 yielding the best beds. The last two core holes on both ends were uneconomical hence supposed to be the boundary.

At Mbiabong II traverse, eighteen core holes were sunk. Ten revealed high-calcium beds occurrence and seven of them were economical with NK1 So 1 yielding the best. On traverse at Obimba, six core holes were drilled. They all revealed high-calcium beds with three being economical. Core hole ZK5 So 11 showed ten bands with seven economical bands. At Utuma area, nine core holes were drilled. Highcalcium bands ecovered from eight holes. Core hole ZK9 So 0 has the best thickness beds but not economical because depth of occurrence. In all there is no traverse with no occurrence of high-calcium (limestone) beds. Within the mineralization window, the depth of occurrence increases from Mbiabong I to Utuma while thickness of beds decreases on that trend. Hence Mbiabong I and II proves to be more economical.

There is good economic prospect for the establishment of a limestone raw material dependent factory in the area. The area has a good limestone deposit, accessibility network, nearby perennial water source and environmental friendly. Nevertheless, the problem anticipated in mining the resource could be management of groundwater. This is due to the general occurrence of low water table and porosity of the underlying rocks in the area. The area is also vulnerable to flooding menace because it is low lying and nearby the Cross river.

Copyright: ©2017 Rock OM, et al. This is an open-access article distributed under the terms of the Creative Commons Attribution License, which permits unrestricted use, distribution, and reproduction in any medium, provided the original author and source are credited.
Top