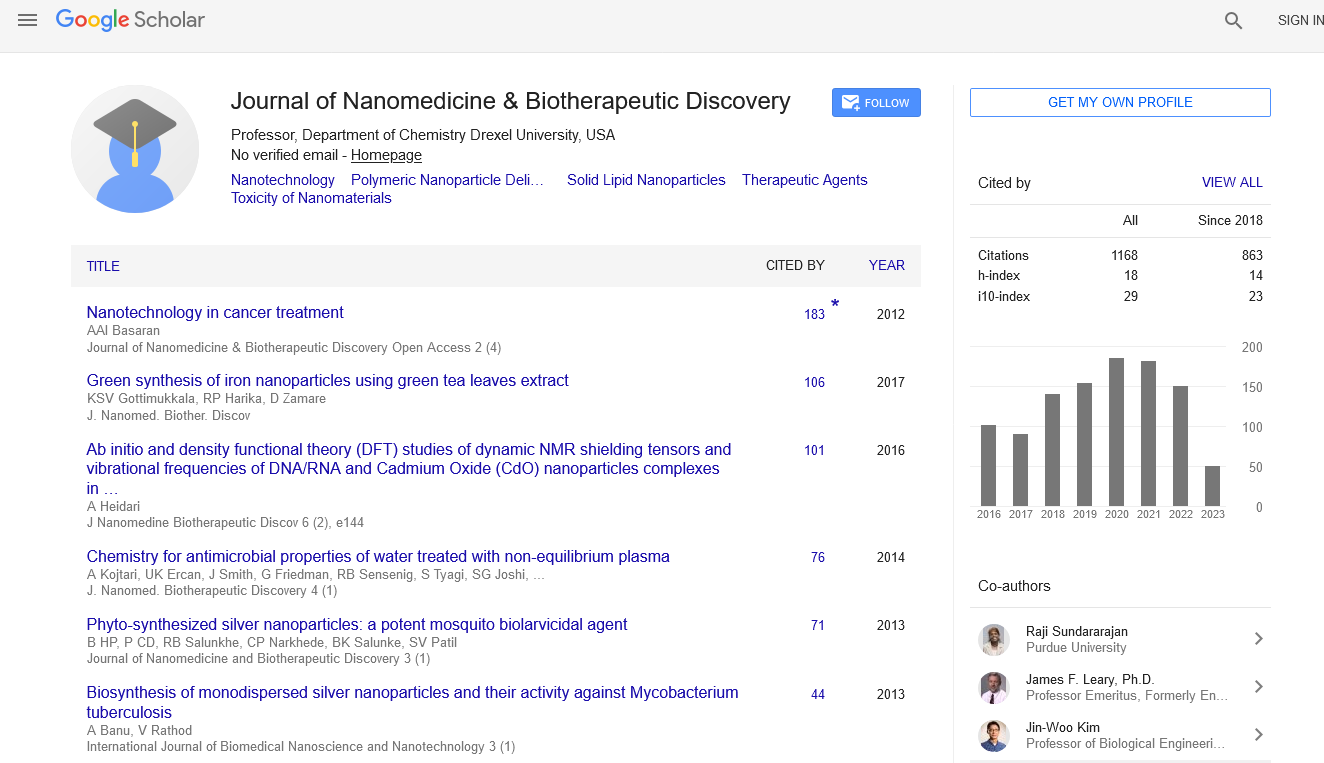 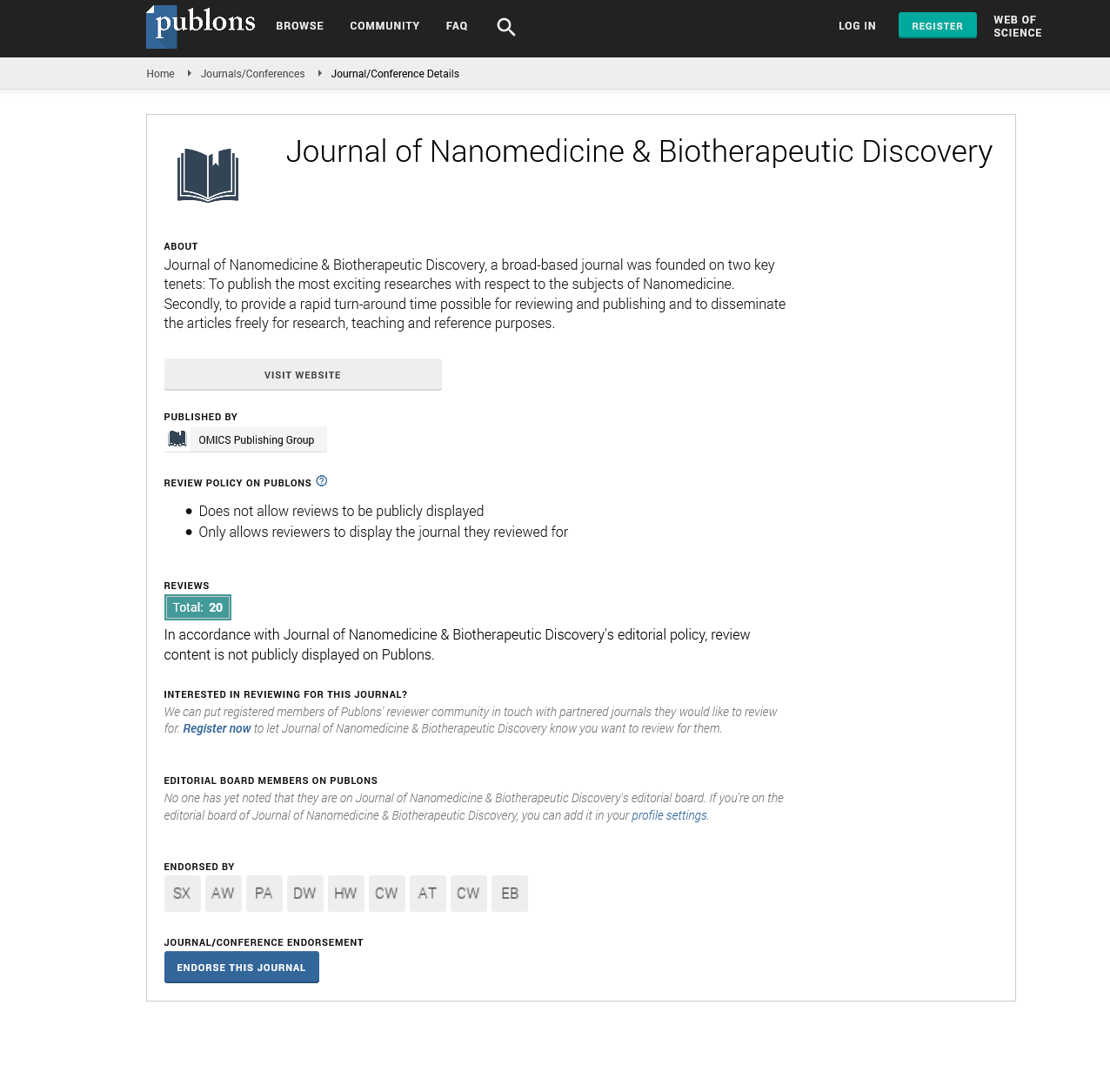 Proceedings of 4th International Conference on Nanomedicine and Nanotechnology In this study, the effect of trehalose liposomes (DMTreC14) constituted using α-D-glycopyranosyl-α-Dglucopyranoside monomyristate (TreC14) and L-α-dimyristoylphosphatidylcholine, on the growth of the human breast cancer cell-line, MCF-7 was examined. It was observed that DMTreC14 had an inhibitory effect on the growth of MCF-7 cells and caused apoptosis. This was attributed to DMTreC14 induced decrease in mitochondrial membrane potential followed by the release of cytochrome-c and activation of caspase-6 and caspase-9 in MCF-7 cells. Furthermore, it was observed that there was an increased accumulation of DMTreC14 in the cell membrane of MCF-7 cells, followed by an increase in the fluidity of the cell membrane. In addition, activation of c-Jun N-terminal kinase/stress-activated protein kinase (JNK/SAPK) was also observed upon treatment with DMTreC14.

Sugar plays an important role in cell recognition, cell response to stimulus, and many other biological processes. Trehalose is disaccharide comprising of two α-glucopyranose rings bound by a α, α-1, 1-glycosidic linkage. It is present in diverse organisms including bacteria, yeast, fungi, and insects [3]. It has been reported that trehalose has the capacity to displace water molecules present on liposomes having a high hydration power [4].

Inhibitory effects of trehalose liposomes composed of phosphatidylcholine and trehalose surfactants, on colon cancer, gastric cancer, hepatic cancer, leukemia, and lung carcinoma cells have been reported [5-9]. However, the effect of treatment with trehalose containing liposomes, on the growth of breast cancer cells has not yet been investigated.

Assessment of 50% inhibitory concentration of DMTreC14

The 50% inhibitory concentration (IC50) of DMTreC14 on the growth of MCF-7 cells was determined on the basis of WST-8 [2-methoxy-4-nitrophenyl-3-(4-nitrophenyl)-5-(2, 4-disulfophenyl)- 2H-tetrazolium, monosodium salt] assay (Dojindo Laboratories, Japan). MCF-7 cells (8.0 × 104 cells/ml) were seeded in 96-well plates and cultured in a 5% CO2 humidified incubator at 37°C for 24 h. Cells were cultured for a further 48 h after adding DMTreC14 (0.1-1 mM on the basis of DMPC concentration). WST-8 solution was added and the cells were incubated for 3 h. The absorbance at a wavelength of 450 nm was measured by spectrophotometer (Emax; Molecular Devices Co., CA, USA). The inhibitory effects of DMTreC14 on the growth of MCF- 7 cells were evaluated by Amean/Acontrol, where Amean and Acontrol denote the absorbance of water-soluble formazan, in the presence and absence of DMTreC14, respectively.

MCF-7 cells were seeded at a density of 8.0 × 104 cells incubated in an incubator supplying 5% CO2 at 37°C for 24 hours. DMTreC14 was added to the cells and the dishes were incubated for 48 h. Cells were centrifuged and suspended in PBS (-) containing 1 mg/ml RNase, 0.1% Triton X-100 and 40 μg/ml propidium iodide (PI, Molecular Probes, Eugene, OR, USA) in a dark box. The percentage of apoptotic cells was analyzed using a flow cytometer (Epics XL system II, Beckman Coulter, Brea, CA, USA).

Estimation of apoptotic was performed using the terminal deoxynucleotidyl transferase-mediated dUTP-biotin nick end labeling (TUNEL) method. Towards this, an In Situ Cell Death Detection Kit (Roche Diagnostics K.K., Japan) was used. DMTreC14 ([DMPC]=100 μM, TreC14]=233 μM) were added to a suspension of MCF-7 cells (8.0 × 104 cells/ml); the cells were then incubated for 48 h. Cells were fixed using 4% paraformaldehyde, and then processed for TUNEL assay as per the the manufacturer’s instructions. Imaging was performed on a confocal laser microscope (TCS-SP; Leica Microsystems, Germany) having a 488 nm Argon laser line (detection at 515-565 nm).

DMTreC14 treated MCF-7 cells were incubated at 37°C for 30 min with 40 nM of 3, 3-dihexyloxacarbocyanine iodide [DiOC6(3)] (Molecular Probes, OR, USA) in order to evaluate the mitochondrial transmembrane potential (Δψm). These cells were then centrifuged, suspended in 500 μL of PBS and were used for flow cytometric analysis.

Assessment of release of cytochrome-c by flow cytometer

Assessment of expression values of p-JNK by flow cytometer

Fusion and accumulation of DMTreC14 into the cell membrane

MCF-7 cells were seeded at a concentration of 3.5 × 105 cells/ml and were cultured in medium containing10% FBS. A wound was created on the monolayers of MCF-7 cells using a sterile pipette tip. These wounded MCF-7 cell monolayers were treated with two concentrations of DMTreC14 i.e., 20 μM and 40 μM. The wounded monolayers were photographed using a light microscope (EVOS fl, Life Technologies, CA, USA) following 24 h incubation (within the doubling time (29 h) of MCF-7 cells as per the ATCC protocol). The areas of migration were measured using ImageJ (Version 1.46 r, National Institutes of Health, MD, USA).

Data are given as mean ± S.E. Statistical comparisons were made using Student’s t-test. P

We examined the morphology of DMPC and TreC14 containing DMTreC14 using dynamic light scattering measurements. DMTreC14 having a hydrodynamic diameter

DMTreC14 induces activation of the apoptotic pathway in MCF- 7 cells Inhibition for migration of MCF-7 cells by DMTreC14

We thank Risa Nagamitsu for her technical assistance. This work was supported in part by a Grant-in-Aid for Science Research from the Ministry of Education, Science, and Culture of Japan (No. 17K01383).

The authors declare that there is no conflict of interest.

Copyright: © 2018 Kuwabara K, et al. This is an open-access article distributed under the terms of the Creative Commons Attribution License, which permits unrestricted use, distribution, and reproduction in any medium, provided the original author and source are credited.