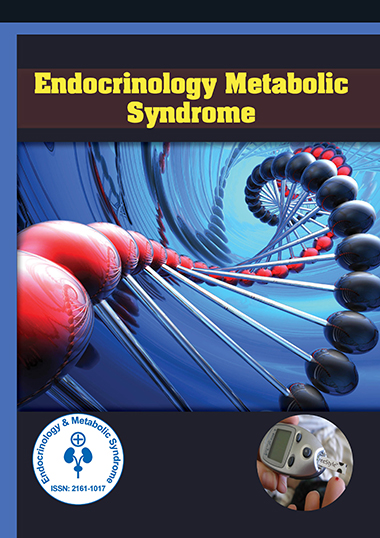 Background: Diabetic foot is defined as the foot of the diabetic patients with ulceration, infection, and/or distraction of the deep tissues associated with neurological abnormalities and varying degrees of peripheral vascular disease of the lower limb. Diabetic foot ulcers are a common and much feared complication of diabetes. The study is aimed to identify incidence of diabetic foot ulcer in diabetes patients of Nekemte Referral Hospital (NRH).

Results: Over the study period, 644 diabetes patients were admitted to the NRH medical service; of these, 115 (17.86%) had foot ulcers. About 61 (55.7%) were males and mean age of participants was 44.4 ± 14.7. After the gram stain was performed, about 77 (66.96%) of the patients with foot ulcer developed infection. From the diabetes mellitus who had developed diabetic foot ulcer, about 31 (26.96%) of ulcer were located on dorsal/interdigital toes. About 49 (42.61%) of the diabetic foot ulcer patients had previous history of ulcer of any location. Of infected diabetic foot ulcers, Forty two (54.55%) of microorganism isolated was gram positive.

Diabetes mellitus is a non-communicable disease and one of the most common chronic diseases [1]. It is characterized by chronic hyperglycemia with disturbances of carbohydrate, fat and protein metabolism resulting from defects in insulin secretion, insulin action, or both [2].

Complications of DM causes significant physical and psychological morbidity, disability and premature mortality among those affected patients and imposes a heavy financial burden on health service [4]. It is characterized by multiple long-term complications affecting almost every system in the body [5].

Diabetic foot is defined as the foot of the diabetic patients with ulceration, infection, and/or distraction of the deep tissues associated with neurological abnormalities and varying degrees of peripheral vascular disease of the lower limb [6]. Diabetic foot ulcers are a common and much feared complication of diabetes, with recent studies suggesting that the lifetime risk of developing a foot ulcer in diabetic patients may be as high as 15% [7]. Foot infection was defined according to the International Working Group on the Diabetic Foot classification system as at least two clinical signs or symptoms of infection in or around the DFU including purulence, erythematic, pain, tenderness, warmth and/or indurations [8].

Diabetic foot complications are common amongst people living with diabetes. Foot ulcerations are one of the most feared complications for both people with diabetes and health care providers due to their negative impact on lives resulting in overall poor prognosis of the disease leading to long period of hospitalization and substantial health care costs [9].

Foot complications, especially foot ulcers, constitute a major public health problem for diabetes patients in sub-Saharan Africa and are important causes of prolonged hospital admission and death in patients from this part of the continent [10].

Foot ulceration and supervening infection are a major cause of morbidity in diabetes patients. Diabetes foot lesions necessitate more hospital admissions than any other specific complications of diabetes [11]. The prevalence of these infections in DFU has been reported to range between 25 ± 60%. Although the critical nature and prevalence of infected DFUs are well appreciated, the development of these infections in the first place has received less attention [8].

In many less-developed countries, foot infections are especially common where there are no available chiropody services, or lesions are ignored or detected relatively late in the course of the infection after unsuccessful home therapy, such as soaking in hot water or application of unproven home remedies or after seeking medical assistance from traditional healers. In those patient’s diabetes has an infectious etiology. Patients often present to hospital only after gangrene and infection have developed, or after localized infection has progressed to systemic sepsis that might not be amenable to conventional supportive therapy with antimicrobials [12].

A prospective observational study was conducted at NRH from March 15 to June 15, 2018. The hospital is located in Nekemte town, which is located 330 km to the west of Addis Ababa, the capital city of Ethiopia. The hospital is a referral hospital and gives health service for more than 10, 000,000 people living in west Ethiopia. There were about 2420 diabetic patients who have been following diabetic clinic annually.

With this, 115 patients were selected from the total of 644 diabetes mellitus patients.

The data was entered in to computer using EPI-manager 4.0.2 software. Data checking and cleaning was done by principal investigator on daily basis during collection before actual analysis. Analysis was done using statistical software for social sciences (SPSS) 24. Descriptive data was generated and placed in terms of frequency and percentage. Descriptive statistics was used to analyze data in terms of frequency and percentage.

Diabetic Foot ulcer: The foot of a diabetic patient that has the potential risk of pathologic consequences, including infection, ulceration, and/or destruction of deep tissues.

Grades of diabetic’s foot ulcer: For purpose of this study we used Wagner system for classification of diabetic foot ulcer which uses 6 wound grades (scored 0 to 5) to assess ulcer depth [13].

Grade 0 diabetic foot ulcer: No ulcer, but the foot is at risk for ulceration

Grade 2 diabetic foot ulcer: Ulcer with deep infection, but without involvement of the bone 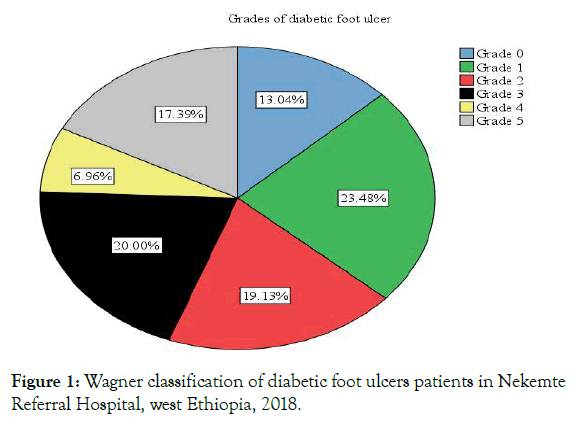 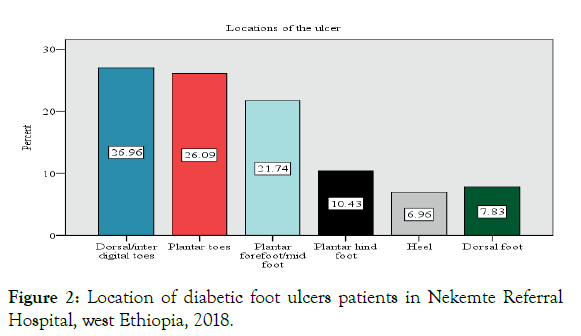 Among the total 115 study participants with DFU, 77 (66.96%) of foot ulcer progressed to infection. Of infected diabetic foot ulcers, forty-two (54.55%) of microorganism isolated was gram positive (Table 2).

This study assessed burden of diabetic foot ulcer at NRH, western Ethiopia. The study found that the incidence of diabetic foot ulcers amongst diabetic patients at the NRH was 17.86%. The study in Taiwan, Singapore and Bangalore, India found the incidence of 2.9%, 8.2% and 8%, respectively which were lower than our study [1,14,15]. The differences might be due to variation in racial difference, differences in life style and socio-cultural variation of study participants. A study was comparable with the study done in Arbaminch and Gondar which found prevalence of 14.8% and 13.6%, respectively [16,17].

The majority of the patients who developed diabetic foot ulcer were males (55.65%). This figure is similar with the study done in Nigeria, Arbaminch and Jimma which was 67.2% and 59.7% and 62.9%, respectively [17-19]. The variation of DFU related to sex, might be reflection of variation in societal role between male and females in western Ethiopia, typically in the study area. Males spent most of their time outside homes doing jobs that need more energy compared to women. The increase in DFUs among diabetic patients, particularly in current study area, is worrying situation for individual families as males are the backbone and the sole earning members of the family, particularly in western Ethiopian population.

According to the gram-stain results about 77 (66.96%) of the patients presents with diabetic foot ulcer developed infection and 38 (33.04%) of them did not developed any type of infection. This figure is higher than the study done in Australia and Jamaica in which the incidence of diabetic foot infection was 40.1% and 3.7%, respectively [8,23]. This difference in incidence of diabetic foot infection is might be due to the difference in the quality of service, life style of the patients and quality podiatric service.

As strength, the study was conducted among DFU patients as the foot complication of Diabetes mellitus patient is increasing in developing world and this study was a prospective observational study and may be used as baseline information for other researchers. As limitations, culture and sensitivity tests were not done to identify specific strain of the pathogen. Further, the follow-up period was short, thus failing to take into account any non- healing ulcers resulting in infection after this time.

In order to reduce the incidence of diabetic foot ulcer and its associated unwelcomed effects East Wollega zone health sector and Nekemte referal hospital diabetic clinic diabetic care providers should strive to reduce its incidence through enhancing the regular diabetic foot evaluation. Additionally, to minimize the risk of developing diabetic foot infection, health educators should emphasize on the benefit of foot care. In this study gram stains were used to determine whether diabetic foot ulcers were infected or not. Therefore, laboratory services should be strengthened like culture and sensitivity tests to identify specific strain of the pathogen.

We thank Jimma University for funding this study. We are grateful to staff members and health care professionals of NRH, data collectors and study participants for their cooperation in the success of this study.

Not applicable. No individual person’s personal details, images or videos are being used in this study.

The study was funded by Jimma University. The funder had no role in study design, data collection and analysis, decision to publish or preparation of the manuscript.

Availability of Data and Materials

The datasets used and/or analyzed during the current study are available from the corresponding author on reasonable request.

Sources of funding : The study was funded by Jimma University. The funder had no role in study design, data collection and analysis, decision to publish or preparation of the manuscript.