Acetylcholinesterase (AChE) is an enzyme that terminates nerve impulses by catalyzing the hydrolysis of neurotransmitter, acetylcholine, in the nervous system in various organisms [1]. Acetylcholinesterase is also the target site of organophosphate and carbamates insecticides [2].

Solanum incanum is a perennial, wild shrub like herb that belongs to family Solanaceae, which grows in many regions of Africa, Middle East and Far East Asia. It is an erect or spreading perennial shrub with leaves and stem occasionally having small prickles. The fruits are small berries of 2-3 cm in diameter and yellowish orange or brown in color when ripe [3]. It is common as a weed around houses, in overgrazed grass land and on road sides. It also found at forest edges and in bush land and grasslands, from sea-level up to 2500 m altitude [4].

The plant is used in many parts of Africa in the treatment of various illnesses such as sore throat, angina, stomach pain, colic, headache, painful menstruation and liver pain. For this purposes leafs, roots and fruit decoctions are drank, roots are chewed and sap swallowed, leaf sap is used for washing painful areas, and ash of burnt plants is mixed with fat and applied externally [4]. Leaves are added to soup to improve the flavor. The fruit and the seed are used in Africa and Asia to curdle milk and to make cheese. Further, the plant is employed in East and Southern Africa for the treatment of skin diseases, general infections, abdominal pains, fever, stomachache and indigestion.

Isolation of acetylcholinesterase enzyme: Acetylcholinesterase (AChE) was isolated by collecting about 0.5 g of adult aphids and homogenizing them in 6 ml phosphate buffer (pH 8.0, 0.01M, containing 1 mM EDTA, 1% Triton X-100, 1M NaCl). After filtration through a Whatman filter paper No. 1, the homogenate was centrifuged at 15,000 g for 10 min at 4°C. The supernatant were used as crude enzyme extract.

Protein quantification: The protein content of the isolated acetylcholinesterase was determined according to the proteindye- binding method of Bradford [8] using bovine serum albumin as standard. The dye solution was made by dissolving 100 mg of Coomassie Brilliant Blue G-250 in 50 ml 95% ethanol and 100 ml 85% (w/v) phosphoric acid. The absorbance was measured at 595 nm in a 72 N spectrophotometer after mixing samples in 3 ml cuvettes against the blank. The protein concentration was estimated from a standard curve of concentration of BSA.

Acetylcholinesterase inhibition assay: The AChE inhibitory activity was preformed according to the colorimetric method of Ellman’s method using acetylcholine iodide as a substrate [9]. The principle of this method is the measurement of the rate of production of thiocholine as acetylthiocholine is hydrolyzed. Thiocholine then reacts with the reagent DTNB and a yellow anion of 5-thio-2-nitrobenzoic acid is produced which has maximum absorbance at 412 nm.

Acetylthiocholine iodide reaction mixture was prepared by addition of 150 μl of sodium phosphate buffer, 10 μl of acetylthiocholine iodide and 10 μl of DTNB. Briefly, 10 μl of acetylthiocholine iodide reaction mixture was added to 10 μl of crude aphid acetylcholinesterase and 20 μl of the different concentrations of the extract. This was incubated for 30 mins at room temperature and the absorbance was read three times with 5 mins interval at 412 nm with spectrophotometer. Dimethoate was used as a standard insecticide. All assays were corrected for non-enzymatic activity using the same mixtures except replacing the enzyme with 10 μl of sodium phosphate buffer. Enzyme activity was calculated from the absorbance value using Beer lamberts law.

Crude fruits sap extract of S. incanum was tested for inhibitory activity against green peach aphids’ acetylcholinesterase at increasing concentrations of 10%, 25%, 50% and 75% by using Ellman’s in vitro method. All tested concentrations of crude fruits sap extract of S. incanum possessed the ability to inhibit acetylcholinesterase of green peach aphids at dose dependent manner (Figure 1). The enzyme activity decreases with the increase in the concentration of the extract. The enzyme activity is expressed as μM/min/mL. 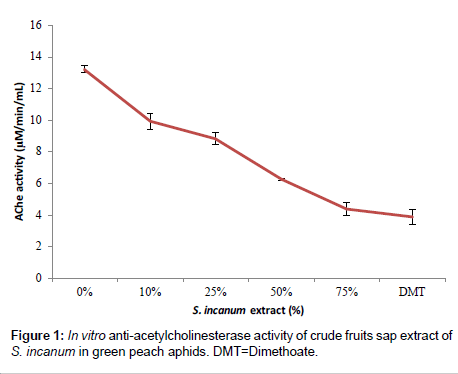 Meanwhile, from the graph shown in Figure 2, an IC50 value of 49.9 was calculated from plotting a regression line through the linear portion of the graph and using the plot equation to calculate the concentration (x) at which 50% inhibition was observed. The protein content of the isolated acetylcholinesterase was 13.5 mg/ml as determined using Bradford method. 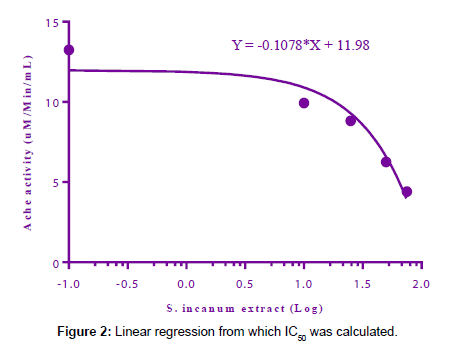 Figure 2: Linear regression from which IC50 was calculated.

A number of compounds were found in the crude fruits sap extract of S. incanum. As Table 1 show, the extract contained alkaloids, saponins, cardiac glycosides, terpenoids, flavonoids and tannins while steroids and phenolics were absent.

Acetylcholinesterase affects the cholinergic system because it regulates the level of acetylcholine and terminates nerve impulses by catalyzing the hydrolysis of acetylcholine. Its inhibition causes death. Irreversible inhibitors have been developed as insecticides such as organophosphates and carbamates [12].

In this study, crude fruits sap extract of S. incanum inhibited the acetylcholinesterase of green peach aphids. The acetylcholinesterase activity was dose dependent and decreased with the increase in the extract concentration. The inhibition of AChE in the present study is in line with previous studies by other researchers. The inhibition of AChE was observed in the cockroach, Periplaneta americana L [13] and the snail, Limnaea acuminate Lamarck, at 40% and 80% concentrations of neem oil [14]. It was also observed that 25 g of distilled water extracts of the botanicals Punica granatum L., Thymus vulgaris L., and Artemisia absinthium L., significantly inhibited the AChE activity of nematodes at 100% concentrations [15].

The results from the experiment suggest that aqueous crude fruit sap extract of S. incanum inhibit the acetylcholinesterase of the green peach aphids at a dose dependent manner. It is therefore, possible the extract has compounds that increase both the level and duration of the neurotransmitter action.

The authors are grateful for the technical support provided by Daniel Gitonga.

Copyright: © 2015 Umar A, et al. This is an open-access article distributed under the terms of the Creative Commons Attribution License, which permits unrestricted use, distribution, and reproduction in any medium, provided the original author and source are credited.
Top