Objective: The purpose of this study was to reduce the workload on the computer operator using the toes. Methods: A subject was a 22-years-old man with upper extremity impairments, who worked at a welfare work activity center. The actual duration of computer operation using the keyboard and touch-pad on the desktop was approximately four hours a day. The subject complained of low back pain and lower extremity fatigue at closing time. To alleviate physical load, the working environment was modified as follows. The installation position of the keyboard and touch-pad was moved to the floor. The computer monitor was moved up and close to the operator. A new monitor, a video camera and light aimed at the keyboard were set up for keyboard projection. The effect of this modification was evaluated by a posture analysis, a sitting pressure distribution, a surface electromyogram at the neck and low back, and subjective feelings of the physical load. Results: In accordance with the working environmental modifications, the posture, the sitting pressure distribution, the myoelectric potential, and the physical load of the user improved. Conclusion: Environmental modifications can improve pain and fatigue at closing time and the operability of the computer user.

Many persons with disabilities work at welfare work activity centers in Japan. These jobs do not impose a high job performance or specific quotas, unlike other careers, and the managers of such workplaces even permit time for rehabilitation during the weekday. However, the managers do not have to address safety and health management for persons with disabilities or employ an industrial doctor from a legal perspective. Under unsafe health conditions, cases suffering from secondary health problems of worsening of the original disorders and diminishing physical abilities, which are caused by undue workload, have been reported in some countries [1-3].

The impairment and movement characteristics of persons with disabilities vary widely among individuals; therefore, it is necessary to address to reduce the physical and psychological load corresponding to the individualities. According to the aspect, we conducted interventions aimed to reduce the load and improve computer operability for persons with spinal cord injuries/diseases and impaired motility functions due to central nervous system diseases [4-6]. Health problems were determined by observation and hearing, and we performed ergonomic measures to solve these problems.

The purpose of this case study was to reduce the physical workload of a computer operator with upper extremity impairments who used his toes to operate the keyboard and touch-pad.

The subject was a 22-year-old man of 167 cm tall and weighing 67 kg. The individual had a motor dysfunction of the upper extremities (a small voluntary movement of both shoulder joints was possible, however, both hands and fingers were extremely limited in computer operation activities) and weak eyesight due to influenza-associated encephalopathy in the infant stage.

The subject worked 7 hours a day, 5 days a week at a welfare work activity center from the time of 19 years old. He sat in a chair with a seat-pan height of 41 cm, and operated a desktop keyboard and touchpad at a height of 535 mm using the first to third toes of the left foot due to the need to look at the keys. He leaned his face close to the screen, approximately 10 cm from the screen, and held the trunk in flexion during fixation on the screen display. The actual duration of computer operation in such as the posture was approximately 4 hours a day.

The subject complained of low back pain and lower extremity fatigue, which resulted in a difficulty in walking at closing time, particularly on the weekend.

We hypothesized that the subject’s health problems were derived from postural load of the left foot on the desktop when working at the computer according to our posture observation and the hours at which his pain and fatigue occurred. To (1) Remove or alleviate the load which caused his health problems and (2) Maintain operability, and if possible improve the operability of the input equipment, the working environment was modified as an interventional measure. In concrete terms, the installation position of the keyboard and touch-pad was moved to the floor so that the subject could operate them with his feet on the floor. The computer monitor was moved up 50 mm and forward (toward the operator) 88 mm. A 21-inch monitor right beside the computer monitor, a video camera and light aiming at the keyboard from under the surface of the desk were set up for keyboard projection (Figures 1-3). A new chair with a seat-pan height of 39 cm, an improved cushioning characteristic, a seatback of sufficient height for the subject, and a headrest, was exchanged as shown in Figure 4. 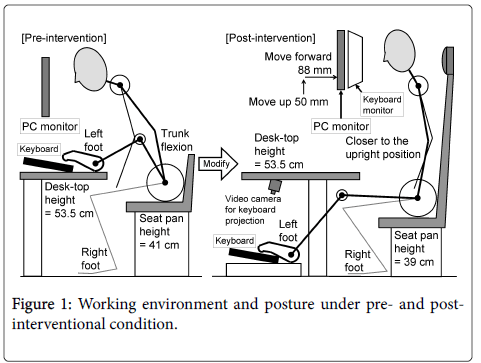 Figure 1: Working environment and posture under pre- and postinterventional condition. Figure 2: The subject's working posture under pre- and postinterventional condition. Figure 3: The subject's toes touching the touch-pad and the keyboard placed on the floor. The working environment around the subject at their welfare work activity center was modified on December 4, 2012.

Evaluation of the effect for intervention

In order to evaluate the effect for intervention, ordinary work with his computer was performed for approximately a half-hour from beginning time on a day under the pre-interventional condition.

Thereafter, the interventional measures were implemented, and the work was continued. In accordance with the condition for the evaluation, his workload might not be identical between pre- and post-intervention. For the objective evaluation, we observed the subject’s posture by video footage, measured the sitting pressure distribution, and measured the surface electromyogram at four sites on the body in the all morning. For the subjective evaluation, questions were posed regarding feelings of physical load, stability of posture, and operability of the computer input equipment. Furthermore, the evaluation of the fatigue feeling on working days was sometimes obtained over a twoyear period.

The measurements for the evaluation were conducted on December 5, 2013.

This study protocol was approved (approval number: 24-28-1) by the Human Research Ethics Committee of Shiga University of Medical Science, Japan. After the details of this study were explained, the subject provided informed consent in writing by his mother.

In accordance with the working environmental modification, the posture, the sitting pressure distribution, the surface myoelectric potential, the subjective physical load, and the operability changed. The flexions of the hip joint and the left knee joint became loosed, and trunk flexion was also moderated. The values of the pressure just under the ischial tuberosity, which were the local maximum, changed from over 29.3 kPa to 9.1 (right), 9.8 to 9.5 (left) at the typical time of touching the touch-pad; and from over 29.3 to 9.1 (right), 13.7 to 9.2 (left) at the typical time of pressing the arrow key, respectively. The right side peak values of the pressure just under the ischia tuberosity changed to less than half that in the pre-interventional condition, and the right and left pressure values were balanced under the post-interventional condition (Figure 5). The time series RMS electromyogram in the pre- and post-interventional conditions is shown in Figure 6. The electromyogram of the left paraspinal muscles was not shown because the electrode on the muscles was removed from the skin at the 17th minute after the initiation of measurement. The baseline value of the right paraspinal muscles increased progressively during pre-intervention, but it decreased to the value at the start of his working within a half-hour after the modification. The mean RMS values of the myoelectric potential when operating the keyboard or touch-pad without involuntary contraction of the trapezius muscles (shown as the average time in Figure 6) changed from 3.8 "Vrms to 2.1 (right trapezius), 14.5 to 8.6 (left trapezius), and 5.9 to 2.1 (right paraspinal), respectively. The subject reported the following subjective findings in an interview: work was easier without low back pain and lower extremity fatigue at closing time in the post-interventional condition; it was easier to operate the computer due to the larger keyboard projection on the additional monitor screen; and he had no feeling of strangeness regarding the visibility due to the altered position of the keyboard. In the present subject, the deep flexions of the hip joint and the left knee joint in the pre-interventional condition put a heavy strain on the muscles and ligaments around those joints, and the sitting position with uneven pressure distribution between the right and left side led to back pain and lower extremity fatigue due to keep the trunk position. The ‘normal’ sitting position resolved the undue physical load after the environmental modification.

The high sitting pressure just under the ischial tuberosity compressed the skin vasculature and constricted it through nerve stimulation in the pre-interventional condition; we speculate that the blood circulation of the low back and lower extremities was inhibited from general physiological knowledge.

The disappearance of the elevated pressure improved the blood circulation of his lower body after the environmental modification. The degree of trunk flexion was moderated and the trunk moved toward an upright position because the computer monitor was moved up and closer to the operator. As a result, the force-moment around the frontal-horizontal axis passing through the sacroiliac joint decreased. This finding may be one of the reasons for the reduction in the myoelectric potential of the paraspinal muscles. The subject often placed his hands on the seat-pan beside his buttocks during the pre-interventional condition, which we speculated to support his trunk with the upper extremities. The myoelectric potential of the trapezius muscles decreased after the environmental modification because the need to support his trunk with the upper extremities was eliminated by moving his trunk toward an upright position.

While working with the computer in the post-interventional condition, the computer user experienced the following: (1) The deep flexions of the hip joint and the left knee joint loosened; (2) The position of the lower body and the sitting pressure distribution between the right and left side were balanced; (3) Trunk flexion was moderated; (4) The elevated pressure just under the ischial tuberosity dissipated; and (5) The myoelectric potential of the trapezius and paraspinal muscles decreased. As a result, the subject worked easier without low back pain and lower extremity fatigue at closing time after the ergonomic modification. Furthermore, the operability of the computer improved.

Individuals with a great deal of knowledge and experience in ergonomics, occupational and environmental health have the opportunity to improve the conditions of computer users after observing their improper postures when operating a computer. This case study showed the necessity for intellectuals in the fields of ergonomics, occupational and environmental health to devote their attention to helping workers with a welfare aspect, even without an application of the labour law.

We are grateful to the subject and staff members at the welfare work activity center for their cooperation in carrying out the present study. Additionally, we would like to specially thank the student group of Shiga University of Medical Science for the field study in social medicine, and Mr. Masato Katoh for assisting in the data analysis. This work was supported in part by a Grant-in-Aid for Scientific Research (C) (No. 25350667) from the Japan Society for the Promotion of Science.

Copyright: © 2016 Tsujimura H, et al. This is an open-access article distributed under the terms of the Creative Commons Attribution License, which permits unrestricted use, distribution, and reproduction in any medium, provided the original author and source are credited.
Top