Background: Imperforate hymen is the commonest congenital anomaly that causes closure of the vagina. Ideally, diagnosis should be made early during fetal and neonatal examinations to prevent symptomatic presentations of its complications at puberty.

Case report: We report a case of a 15-year-old girl who presented with delayed menarche, eight-month history of cyclic abdominal pain, and a three-week history of lower abdominal swelling. A doctor prescribed anthelmintic and analgesic drugs to her a month ago before she was verbally referred to ESUT Teaching Hospital, Enugu. The development of her secondary sexual characteristics was normal for her age. A 20 cm-sized suprapubic mass, and a bulging pinkishimperforate hymen were found on examination. Her transabdominal ultrasound revealed massive hematometra and hematocolpos. She had virginity-preserving hymenotomy and evacuation of about 1000 mls of accumulated coffee-colored menstrual blood.

Conclusion: Clinicians should have high index of suspicion of imperforate hymen when assessing cases of delayed menarche with cyclic lower abdominal pain to prevent the consequences of its delayed treatment like massive hematometra and hematocolpos.

Imperforate hymen is a rare congenital malformation of the vagina. The incidence rates vary from 1 in 1000 to 1 in 10,000 females [1]. It occurs when the sinovaginal bulb fails to canalize with the rest of the vagina. The occurrence is sporadic, and typically presents at puberty with delayed menarche, cyclic lower abdominal pain and mass, and bulging vaginal membrane at the vaginal introitus that are secondary to the accumulation of menstrual blood as hematocolpos and hematometra above the imperforate hymen [2]. Other reported bizarre modes of presentations of the complications of untreated imperforate hymen include pelvic infection with tubo-ovarian abscess, obstructive acute renal failure, non-urological urine retention, hematosalpinx, peritonitis, endometriosis, mucometrocolpos, constipation, and recurrent urinary tract infection [3-6]. Clinicians should have high index of suspicision of imperforate hymen for them to make early diagnosis of these bizarre and challenging modes of presentations of the complications of untreated imperforate hymen.

Miss UG is a 15-year-old girl who was referred to the gynecologic clinic of Enugu State University Teaching Hospital on account of eightmonth history of cyclic abdominal pain, delayed menarche, and a threeweek history of lower abdominal swelling. She admitted to occasional episodes of constipation and urinary retention. Her secondary sexual characteristics were normal for the age (Tanner stage III). A 20 cmsized suprapubic, tender, cystic, and dull to percussion mass was found on abdominal examination. Perineal examination revealed a bulging pinkish imperforate hymen (Figure 1). Transabdominal ultrasound revealed a grossly dilated uterine cavity, and vagina that were containing 811.8 cm3 of fluid with low level echoes. The urinary bladder was compressed by the fluid. The kidneys, ureters, uterus and ovaries were normal. The full blood count, serum urea, electrolyte and creatinine were also normal. The patient and her mother were counseled on the surgical treatment options and the possibility of loss of virginity during the surgery. They gave consent to the surgery that may preserve virginity. She had hymenotomy under general anesthesia on 31/8/2015. Over 1000 mls of coffee-colored menstrual blood was evacuated (Figures 2 and 3). The urethra was catheterized to avoid its iatrogenic damage before about 1.5 cm cruciate incisions were made on the central portion of the membrane. Minimal trimming of the edges of the hymen was done to prevent defloration. Vircryl 2-0 sutures were applied at four points on the edges of the hymen (Figures 4 and 5). The urethral catheter was removed after the procedure in the theater. Intravenous augumentin 1.2 g 12 hourly were administered for the first 24 hours, and tablets augumentin 625 mg twice daily were continued for the next seven days. She started tablets paracematol 1000 mg thrice daily for 4 days when she became fully conscious from the general anesthesia. Her postoperative recovery was uneventful. She was discharged on the third postoperative day, and was to be seen in the gynecological clinic in six weeks. 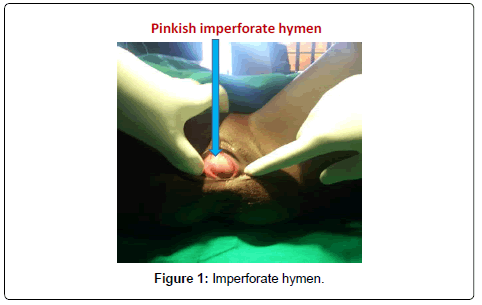 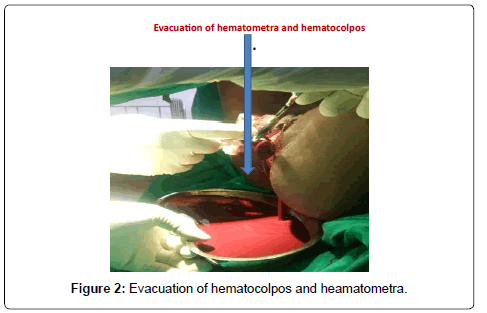 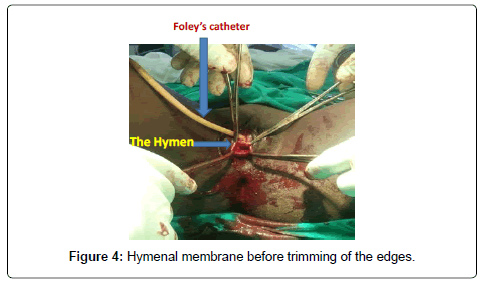 Figure 4: Hymenal membrane before trimming of the edges. 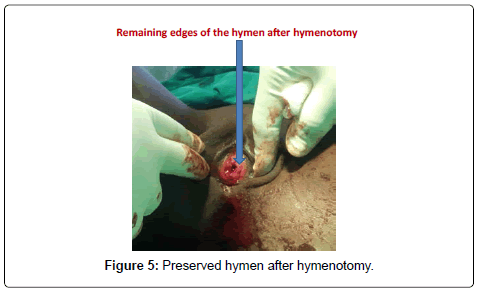 Early diagnosis and timed surgical treatment of an imperforate hymen are important to prevent the complications associated with the delayed treatment after puberty. The diagnosis is usually delayed till after puberty when it presents with its complications like delayed menarche, cyclic lower abdominal pain and mass, and bulging vaginal membrane as in miss UG [2]. Constipation, urinary retention and infection, pelvic infection and tubo-ovarian abscess, hematosalpix, and endometrosis are the other reported symptomatic presentations of imperforate hymens when treatments were delayed [3-6]. Our patient also had occasional constipation and retention of urine. A defect on the hymenal barrier can encourage ascending pelvic infection in the accumulated menstrual blood as pelvic inflammatory disease, and pelvic abscess, and this informed the empirical use of antibiotics in our patient [3-9]. The diagnosis of imperforate hymen in miss UG was delayed till after menarche when over 1000 mls of menstrual blood had accumulated as hematometra and hematocolpos. Early diagnosis of imperforate hymen in the fetus, newborn or in childhood and timed hymenotomy at menarche would have prevented the complications. The timing of surgery is controversial. Some authorities believe that hymenotomy is simple and can be done even in newborns [4]. Virginity is cherished by many religions, cultures and families [8]. Our patient and her mother were counseled about this issue of defloration during surgery. They opted for a virginity-preserving hymenotomy. Minimal edges of the hymen were excised in our patient as were done by other authors [2,8]. Acar et al. [10] advocated incision and insertion of Foleys catheter as a drain for 14 days for better preservation of the hymen and virginity, but the risk of ascending infection and the discomfort of having insitu Foleys catheter in the young girls made the procedure unpopular [8]. Other consequences or clinical implications that timed hymenotony with good surgical techniques can prevent include recurrence or closure of the opening, scarring of the edges of the hymen and dysparenuia, ascending pelvic infection and infertility, chronic pelvic pain, and ectopic gestation. Most girls who want to conceive after surgery usually achieve pregnancy [11].

Imperforate hymen is a rare congenital malformation that closes the vagina outflow tract causing accumulation of mucus, fluid and menstrual blood. High index of suspicion is required for early diagnosis and treatment before the complications like massive hematometra and hematocolpos occur. Virginity-preserving hymenotomy should be the treatment of choice as virginity is cherished by many religions, cultures and families.

Copyright: © 2015 Okafor II, et al. This is an open-access article distributed under the terms of the Creative Commons Attribution License, which permits unrestricted use, distribution, and reproduction in any medium, provided the original author and source are credited.