Impact of Biofield Treatment on Yield, Quality and Control of Nematode in Carrots

Impact of Biofield Treatment on Yield, Quality and Control of Nematode in Carrots

This study tested the Null Hypothesis for the effect of biofield treatment when used for control of nematode on carrot crops, Daucus carota, under typical growing conditions in year 2012 at Guadalupe, California, USA. Following biofield treatment, carrot seeds were planted in replicate plots with mechanical seeder and their development was recorded compared to control seed growth from untreated plots and plots treated with the commercial standard nematicide, further Vydate L was applied three times at rates of 1 and 0.5 gal/A, at 1, 18 and 35 days after seeding, respectively. At 70 and 109 days after the first application root galling severity in biofield treated crops was reduced by 54% and 22% respectively as compared to untreated while the Vydate response showed 0% and 25% control, respectively. Plots planted with biofield treated seeds resulted in the greatest number and weight of marketable carrot roots. Total yield and gross return were greatest in biofield treated group producing an approximately 33% increase over the untreated controls and 15% increase over those treated with the commercial standard, Vydate L. Vitamin A (beta carotene) was significantly greater (6512 IU/100 g) in biofield treated carrots compared with both the untreated controls (4941) and the commercial standard (5143). The results concluded that, Biofield treatment caused the numerical improvement in yield along with nematode control in carrots however, caused statistically significant increase in Vitamin A content.

Information-containing biofield energies surrounding living organisms are postulated to be involved in their self-regulation processes [1]. In recent times, an increasing number of papers are showing scientifically measurable impact of the biofield energies of some energy healers transmitted through intentional mental energies and interacting with matter, microbes and plants. The basic assumption of science that such energies can be ignored in normal scientific models of the material world until proved both relevant and productive has led to the development of many noteworthy and reliable technologies. Nevertheless, the finding that biofield energies are able to directly influence matter, and more specifically, that they can influence the development and self-expression of living organisms, is of value to science. It is therefore necessary to establish their scope and scientifically integrate the influences in beneficial ways into existing technologies.

Studies by Trivedi and Tallapragada [2,3] claim quantifiable transformations in the physical and structural properties of organic and inorganic powder materials due to a biofield energy transmission technique, also referred herewith as Biofield treatment. They report that elemental diamond, graphite and activated charcoal powders showed measureable and significant changes in their molecular structure after the said treatment. Dabhade, et al. [4] similarly show that measurable changes in particle size and hence surface area as well as crystallite size of antimony and bismuth metal powders resulted from the same external biofield treatment which they suggest may have caused a relatively high energy state to occur within the treated substances. With regard to plant life, Patil, et al. [5] reported results from this energy of consciousness on micropropagation response of Patchouli. The source of energy treatments used in these studies was a specific technique by an internationally well-known energy practitioner and his students, whose names are not mentioned here in accordance with recommended best scientific practice, but can be provided on demand for replication experiments.

As information-containing energies are here involved, with a synergistic intention, it may be expected that living materials would be able to show the impact more effectively. While the impact on humans can be accounted for by the placebo effect, experiments on plant systems can show whether such placebo effects are necessarily involved. The in vitro experiments reported above show significant results which display some intrinsic variability in the controlled laboratory conditions and in early tissue growth stages. However in vivo testing was able to show more consistent results due to the larger adaptive challenges faced by samples in the field. Shinde et al. [6] and Sances, et al. [7] compared the impact of biofield treatment when applied with and without various scientific treatments of pesticides and fertilizers which further showed a statistical increase when biofield is applied along with normal scientific treatments. Thus they showed a synergistic effect of the biofield treatment with externally applied chemical agencies. With regard to crop yield, Lenssen et al. [8] reported the soybean productivity was found to be similar when only biofield treatment was applied at the level of seeds as compared to the control group, which received standard fungicides application.

Vitamin A is a pale yellow primary alcohol derived from carotene. It affects the formation and maintenance of skin, mucous membranes, bones, teeth, vision and reproduction. In addition dietary Vitamin A, in the form of beta carotene, an antioxidant, may help reduce the risk of certain cancers. A lot of emphasis has been given on breakdown of vitamin A content of carrots after processing or cooking, however, there were hardly any attempts made for improvement of Vitamin A content while growing carrots at field levels [9].

In Microbiology experiments, The said treatment caused the changes in the biochemical properties and antibiotic sensitivity patterns of Staphylococcus epidermis, Yersinia enterocolitica and on Enterococcus faecalis [10-12]. The details of several scientific investigations and the results achieved through Biofield on Vanadium Pentoxide, Silicon, Tin, Lead, Zirconia, Silica, Aluminium and many more, in the form of original data are reported elsewhere [13-17].

In this paper we report on comparison of crop quality, vitality, disease and yield of treated and untreated commercial carrot plantings. While disease may be effectively controlled using external chemicals, it is normally seen that subsequent yields are affected by such applications. Vydate, though commonly used as a standard for nematode control, shows a crop growth response for a few weeks following application even when no pest is present; however, this response seldom translates into a yield response. Vydate is also a systemic insecticide which can control feeding damage from some soil and foliar insects. The objective was to compare the crop performance with various types of treatments, namely untreated controls, crops with application of Vydate and crops with application of biofield treatment, in a blind randomized study.

Treatments were of three types, with five replicates per treatment. Control carrot (Daucus carota) seeds, untreated in any way, were planted in untreated plots and in plots treated with the commercial standard, Vydate L, applied three times at rates of 1 gal/A, 0.5 gal/A, and 0.5 gal/A at 1, 18 and 35 days after seeding respectively in a dilution of 27,154 gal/A (one acre-inch of water). Applications were performed using drip irrigation operated at a pressure of 10 psi. The performance of these treatments was compared with that of biofield treated seeds planted in untreated plots. The biofield treatment was applied for about 3 minutes to the seeds. Plots in the three cases were allotted for treatment in randomized fashion, with locations unknown to evaluators.

Evaluations consisted of assessing ten plants per plot for shoot length, along with root galling severity and yield measurements based on production grade number and weight of marketable carrot roots. Randomly selected 25 carrot samples per plot were analyzed for vitamin A (beta carotene) content at National Food Laboratory, Livermore, CA. Field or laboratory evaluations were conducted six times over a two month period of growth. There appeared to be no signs of insects or insect feeding that occurred on plants in any of the plots. This may be because the experiments were conducted in the winter months, with evaluations done from November to January, when most of the pests are in more dormant stages, showing less infestation of plants. However, when root galling severity was compared at 70 DAP and at 109 DAP (Figure 2), it was initially found to be lower in biofield treated crops as compared to the other two, and at the end, it was lower in both biofield-treated and Vydate-treated crops as compared to untreated controls. 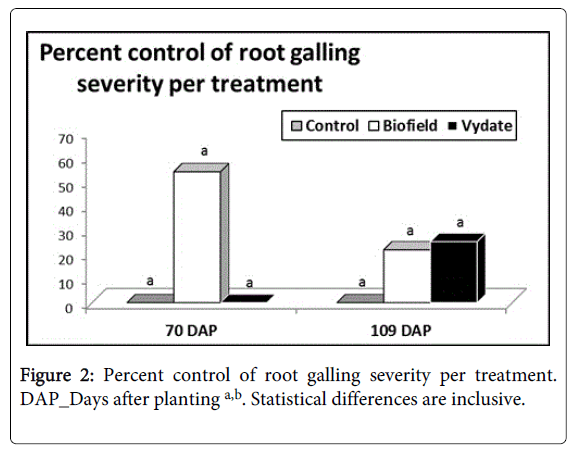 Plots planted with Biofield treated seeds resulted in the greatest number and weight of marketable carrot roots (Figure 3). Total yield and gross return were greatest for this treatment producing 16,267 lb/acre at a first point of sale value of $3904/acre (Figure 4). This is approximately a 33% increase over the untreated controls and a 15% increase over the commercial standard, Vydate L. Figure 3: Yield per treatment in terms of average number and weight of marketable roots and average total yield (lb/acre) per treatment. a,b . Statistical differences are inclusive. 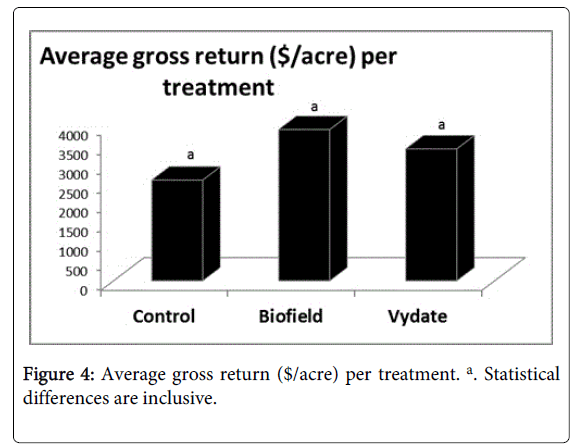 Vitamin A (beta carotene) content (Figure 5) was significantly greater in the Biofield treated carrots compared with untreated controls as well as the commercial standard, yielding 6512 IU/100 g of root tissue, which was a 32% increase over untreated controls and a 27% increase over the Vydate-treatment further testifying to improved grade of crop. 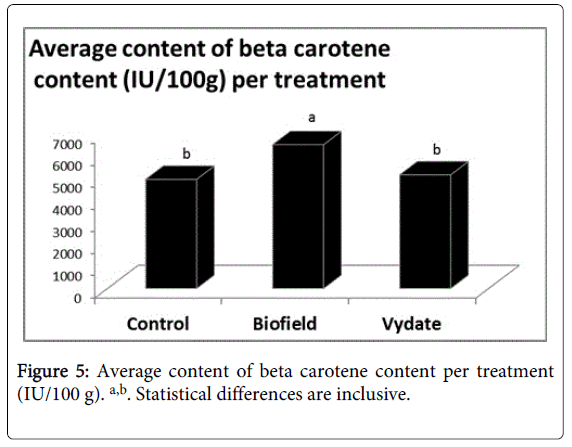 The overall results indicated that biofield treated crops had improved overall immunity as compared to untreated crops, whereas the yield and quality of crop was numerically greater than both untreated crops as well as Vydate-treated crops. Although plant growth in terms of shoot length was not improved by the biofield treatment, the treatment was effective in its targets as an alternative to the chemical treatment, at the same time providing higher marketable yields of crop and gross return per acre besides better quality and higher vitamin A content. The shoot lengths in the plots which are treated with Vydate was significantly higher, however it was not directly proportional to the yield since biofield treatment produced more yields. It seems that Vydate treatment caused more vegetative growth on top of the soil but biofield treatment enhanced root growth which eventually produced more yields. In recent years demand of beta carotene has been increasing steadily because of its possible roles in the treatment of human diseases [9]. In current studies effect of biofield treatment found significantly positive on Vitamin A content in carrots. The results indicated the ability of Daucus carota to respond to biofield treatment with improvement in yield, quality (vitamin A) and nematode control.

These results are consistent with studies already reported with other crops achieved through Biofield treatment, making it necessary that it is further investigated by science to determine the full scope and study the underlying mechanisms.

Copyright: © 2015 Shinde VD, et al. This is an open-access article distributed under the terms of the Creative Commons Attribution License, which permits unrestricted use, distribution, and reproduction in any medium, provided the original author and source are credited.
Top